KENT CITY – It starred out with a juvenile “Fab Four,” so to speak, and Coach Scott Carlson was aware of the talented young basketball players as early as

They were Kenzie Bowers, Jenna Harrison, Audrey Dreyer and Alyssa Larson, and there was no doubt in Carlson’s mind that the classmates were going to be good. 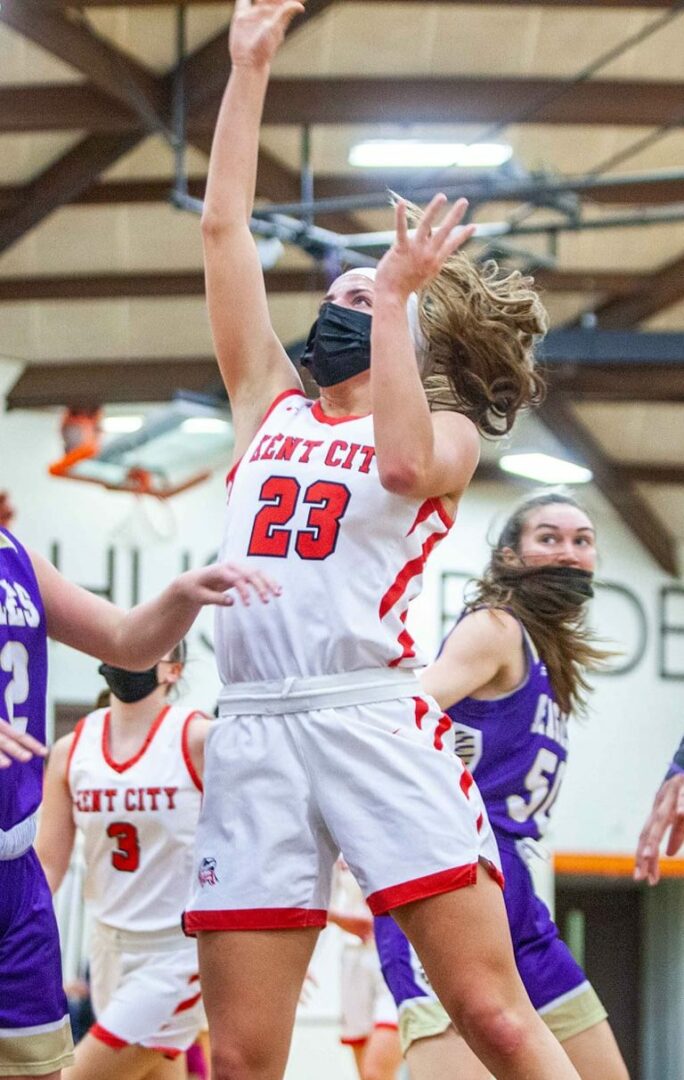 Kenzie Bowers follows through after a layup for Kent City during its quarterfinal win. Photo/Jason Goorman

“I think I probably started talking about it and anticipating back when they were in the sixth grade,” said Carlson, the 12th year girls varsity basketball coach at Kent City High School. “That group was really, really good as kids.”

Of course things don’t always turn out as planned, and the group did not end up playing together for four years of high school. Dreyer transferred to another school after her sophomore year, and Larson suffered injuries that forced her to miss the last two seasons.

That left just Bowers and Harrison to carry the torch as they entered their senior season this year.

Luckily for Kent City, there was more talent coming up the pike. It started with current juniors Emma Geers and Taryn Preston, who stepped in as starters last season, and continue in those roles this year. Lexie Bowers, Kenzie’s talented younger sister, came up to varsity as a freshman last year, and Maddie Geers did the same this season.

So Carlson had it right when he figured that his team would be great by the time those sixth-graders were seniors. The Eagles are now 20-0 this season, and qualified for the Division 3 state Final Four for the first time in program history on Monday by crushing Schoolcraft 52-19 in the quarterfinals. 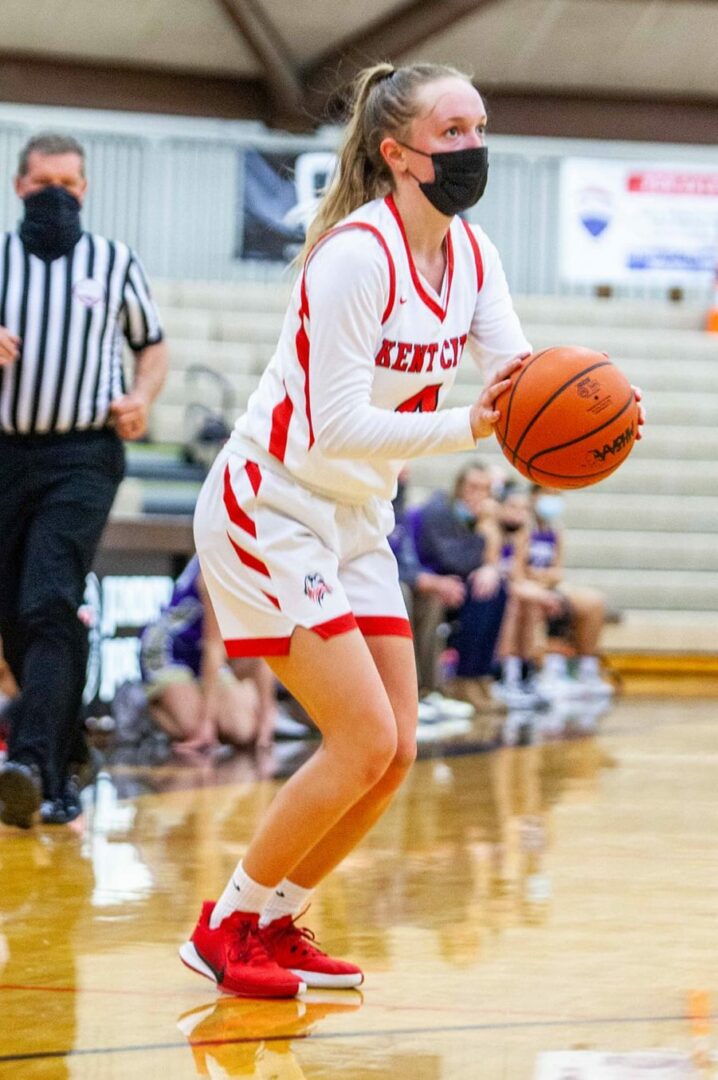 Jenna Harrison spots up from behind the arc for Kent City. Photo/Jason Goorman

The coach just didn’t realize how many underclassmen would end up playing huge roles when that season came to pass.

Now two seniors – Kenzie Bowers (averaging 20.4 points per game) and Harrison (11 points), along with sophomore Lexie Bowers (9 points) and freshman Maddie Geers (11 points) – are the leading scorers for the Eagles, who will meet undefeated Calumet on Wednesday at 12:30 p.m. in the state semifinals at Michigan State University’s Breslin Center.

The winner will advance to Friday’s state championship game, against the winner of the Grass Lake-Hemock semifinal.

“We still have three of them (from that sixth-grade group), including two who are healthy and can play,” Carlson said. “The group behind them, the juniors, are strong, and the next ones after that just stepped up. We returned four starters from last year’s team, which was 22-2, and plugged in freshman Maddie Geers, who’s been very good.”

Kent City’s run through the state tournament this year is really more of a quest, which has been hardened by three years of bitter disappointment.

It started in 2018, when the current seniors were freshmen and several were on varsity. The team made it all the way to the state quarterfinals, before losing to Pewamo-Westphalia 45-30.

“They jumped on us at the beginning, then we played them even to the end, but once we got in that hole it was hard to get out of it,” Carlson said. “We knew we were going to be back.”

The next year Kent City and Pewamo-Westphalia met up in regionals.  The result was a classic game that fans will remember for years, but ended in heartbreak for the Eagles. 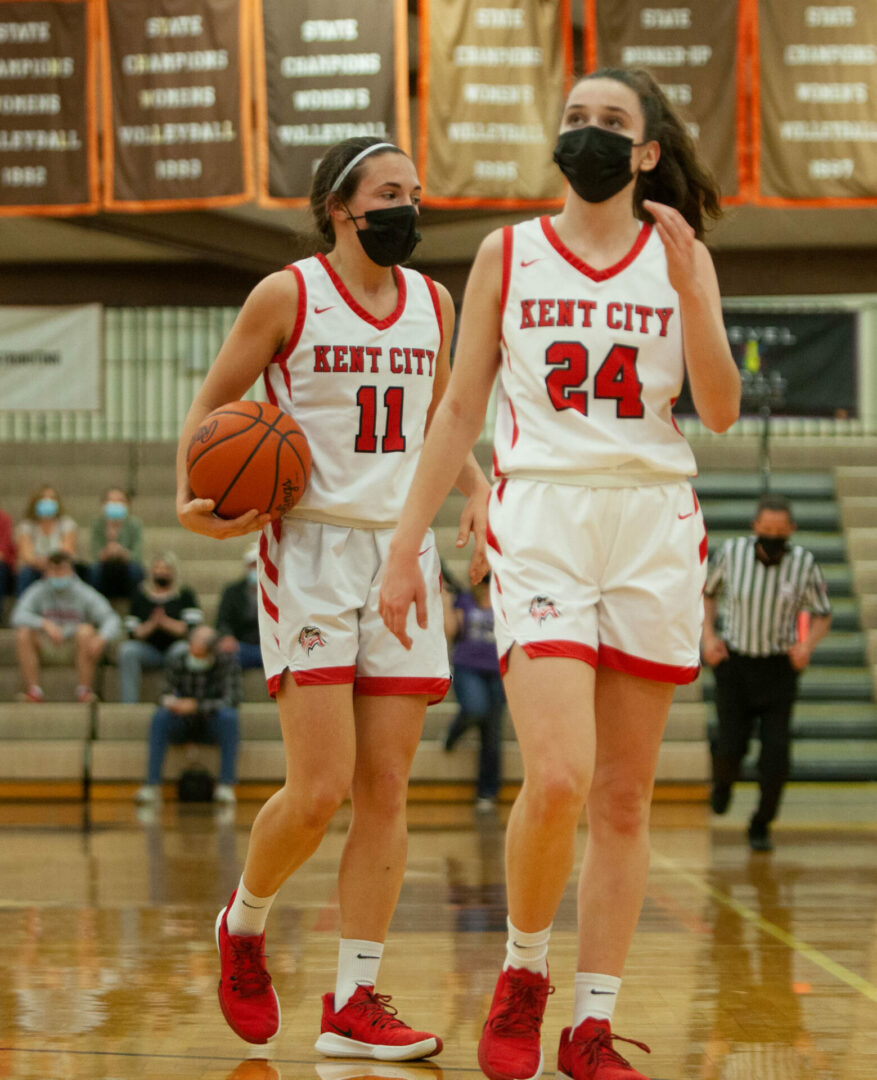 Taryn Preston holds the ball as No. 24 Madelyn Geers looks up at the scoreboard in Kent City’s quarterfinal win. Photo/Jason Goorman

They led by three points with less than a minute left, but had a turnover and two missed free throws, giving P-W another chance. The end result was a 35-33 loss for Kent City, and the sting that went with it.

“That was very painful,” Carlson said. “We knew we had the team to win it, but we had a turnover and a few missed free throws, then they score with 16 seconds left and win the game and go on to win the state title. We needed a bounce to go our way here and there, and they needed about five bounces, and got every one of them.”

Nobody would have believed that Kent City’s season could end in a similar fashion for three years in a row, but it did. The Eagles met up with Pewamo-Westphalia in regionals again last season, and lost 40-37.

Still Kent City remained patient, because they knew they would be loaded with talent this season, and would have another chance.

“We came back and competed with them, and made it a three-point game, and with four starters coming back, we knew this year was going to be a good year,” Carlson said. 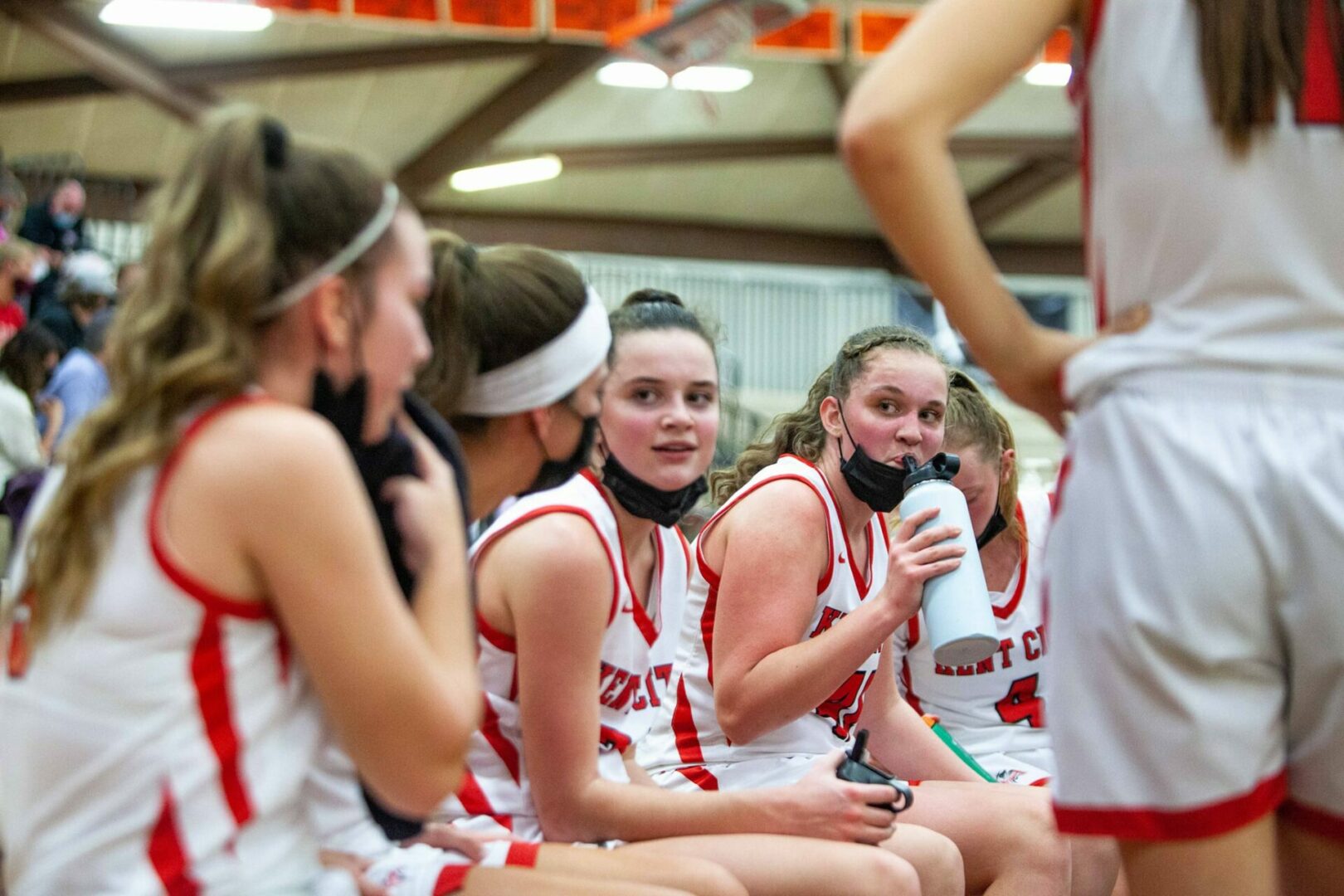 It’s been more than good. Kent City has not only won all of its games, but none of them have been particularly close. They opened up the season with an almost unbelievable 125-12 victory over Lakeview. The only game with less than a 10-point margin was a 45-41 victory over Grand Rapids Christian on Feb. 15.

There have been no close calls so far in the tournament. The Eagles have blown past White Cloud 57-14, Morley Stanwood 63-32, Western Michigan Christian 53-37, Grand Rapids Covenant Christian 69-23 and Schoolcraft 52-19. 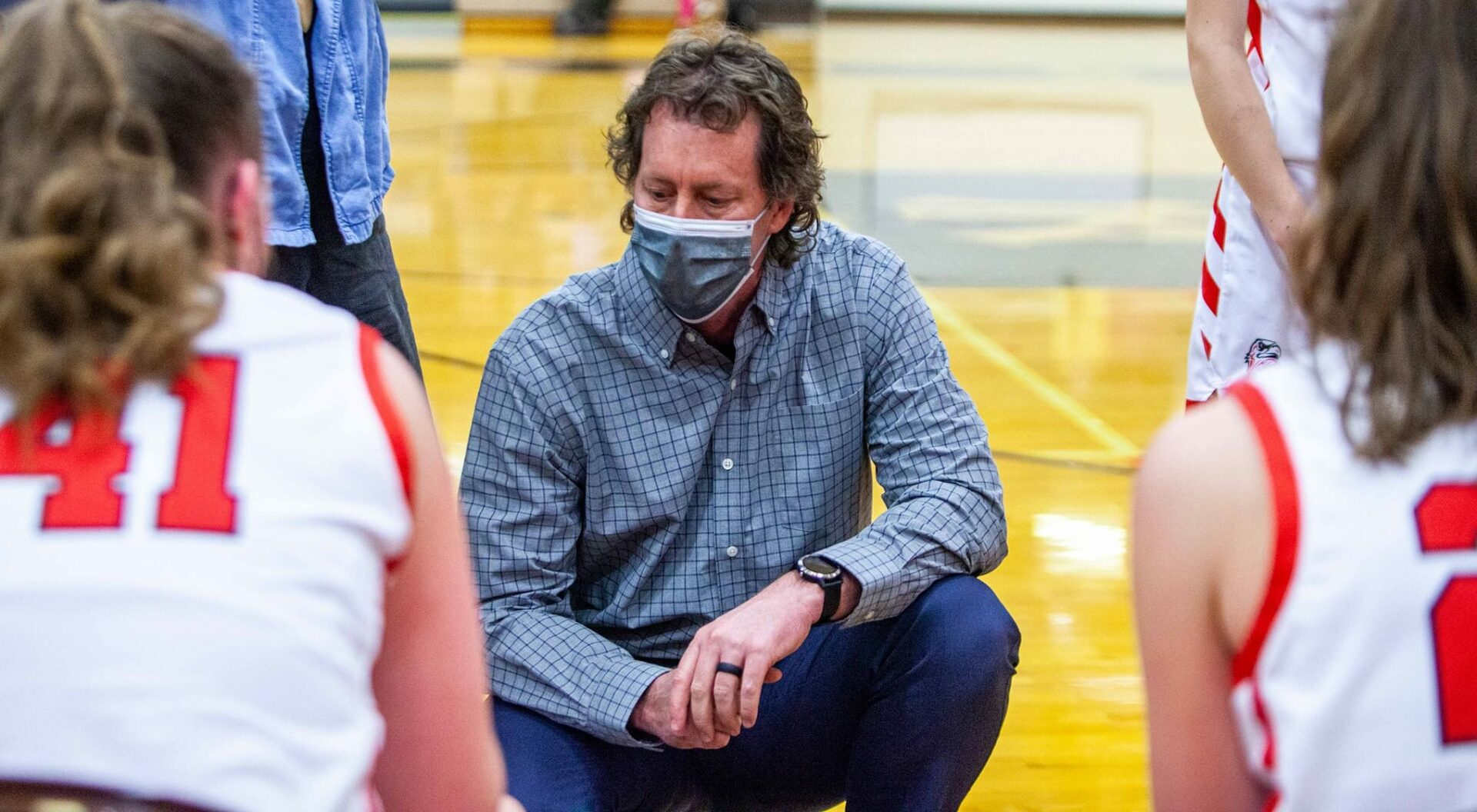 “Our offense is still there, but we are a lot more focused when it comes to defense,” Carlson said. “We have four starters back from last year, and I think Kenzie Bowers has stepped up her defense and been a leader on that. Maddie Geers also has incredible speed and plays great defense, and I think that has brought everybody up a notch.” 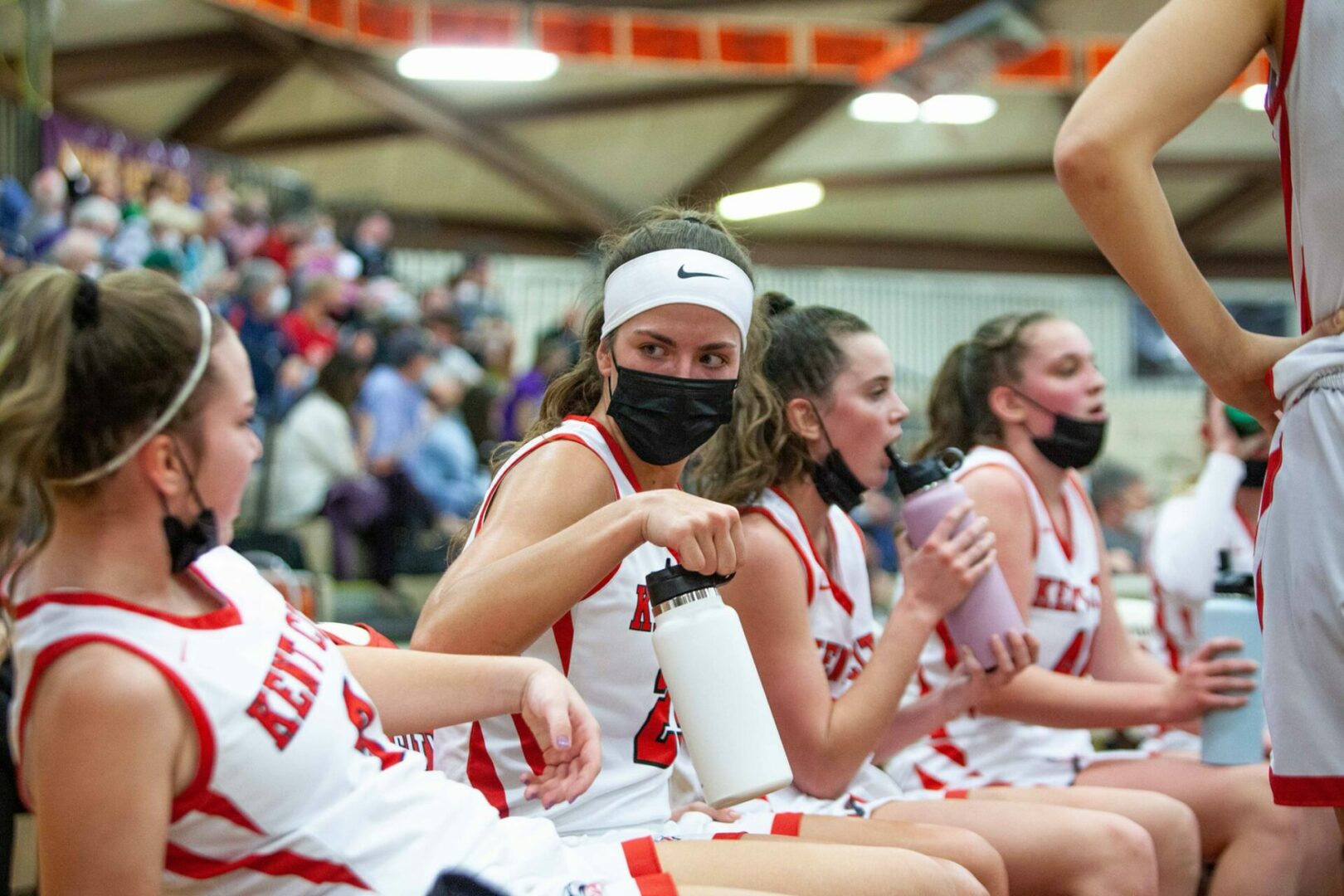 Lexie Bowers leans back on the bench during a timeout as sister Kenzie Bowers offers her water bottle. Photo/Jason Goorman

The Eagles expect a strong challenge from undefeated Calumet on Tuesday.

“I’ve seen enough to know they are a very solid team,” Carlson said. “Their defense is solid and they score a lot of points, with most of them coming off their defense. I think you will see two similar styles, but we will play more man defense and they will play more zone.”

While the Eagles very much respect the other three teams left in the tournament field, the disappointments of the past loom large in their minds, and they are going into the semifinal round with a lot of determination, according to Carlson.

“They want that state final game,” he said.