Skorpik leads Lumberjacks to their first shutout victory in more than two years, a 3-0 win over Dubuque Fighting Saints

MUSKEGON – It had been a very long time since the Muskegon Lumberjacks had posted a shutout victory.

Under normal circumstances the Jacks don’t need shutouts, because they have one of the most explosive offenses in the USHL, and usually score more than enough to win.

But great goaltending came in handy on Saturday, because the puck wasn’t going in the net very much.

They got it from goalie Jan Skorpik, who hadn’t played in the last five games for Muskegon, spanning 14 days. He showed no rust at all, stopping all 22 shots he faced in the Jacks’ 3-0 victory over the Dubuque Fighting Saints at Mercy Health Arena.

The game was a lot closer than the final score indicated, because two of Muskegon’s goals were empty-netters scored very late in the game. 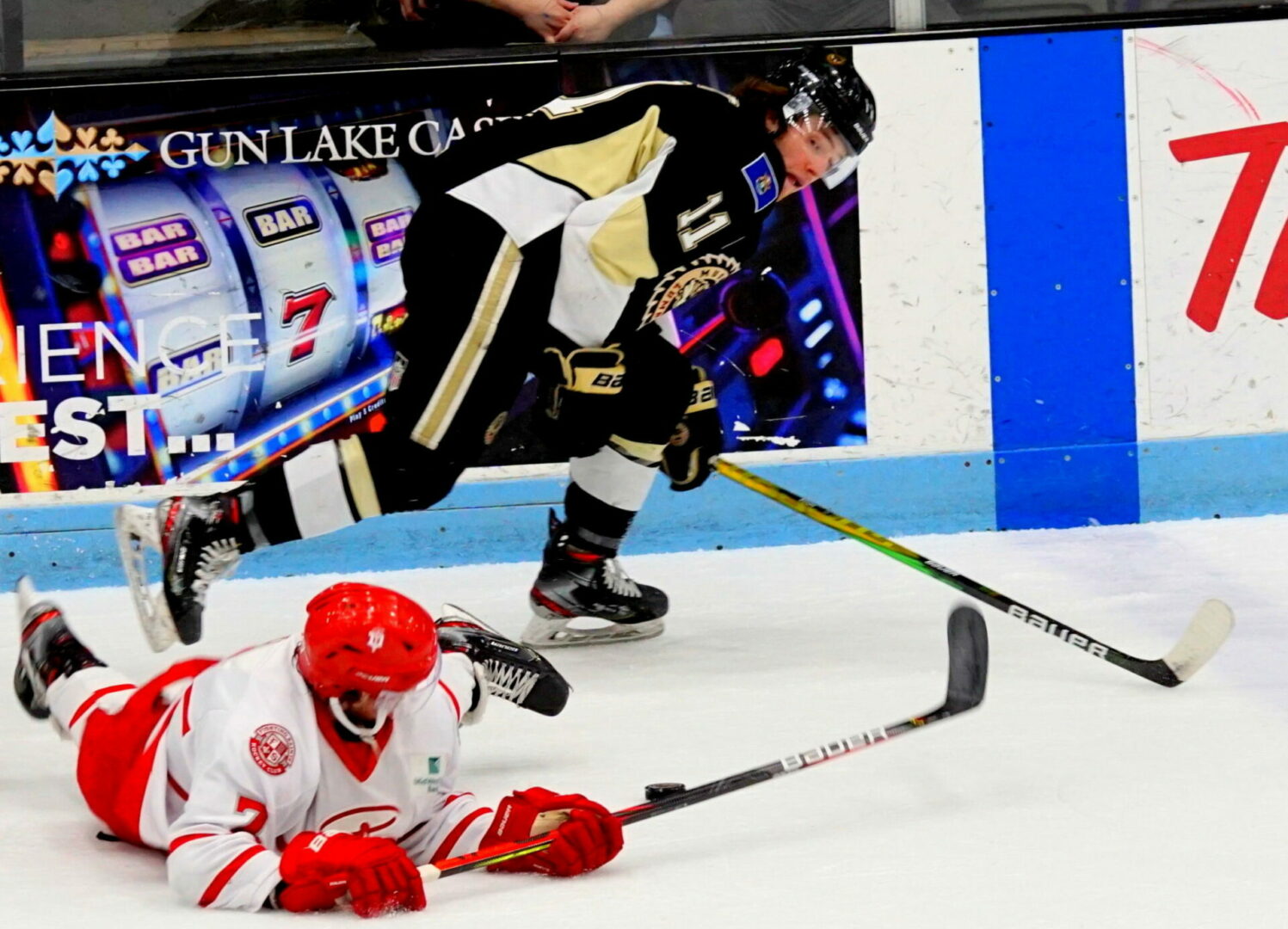 Dylan Wendt skates past a Dubuque player along the boards. Photo/Leo Valdez

“He made the saves that he had to,” Lumberjacks Coach Mike Hamilton said about Skorpik. “We had some penalties that we have to stay away from, but at the end of the day Skorpik was really good and bailed us out when we needed it.”

It was Skorpik’s first career shutout on North America ice. His last came when he played as a youngster in the Czech Republic.

“I was trying not to think of the pressure throughout the game,” Skorpik said. “I was stretching and skating to keep me warm and it worked. We have great defensemen and a great team, and I really hope we’re going for a cup, and I am so happy to be a part of this organization.” 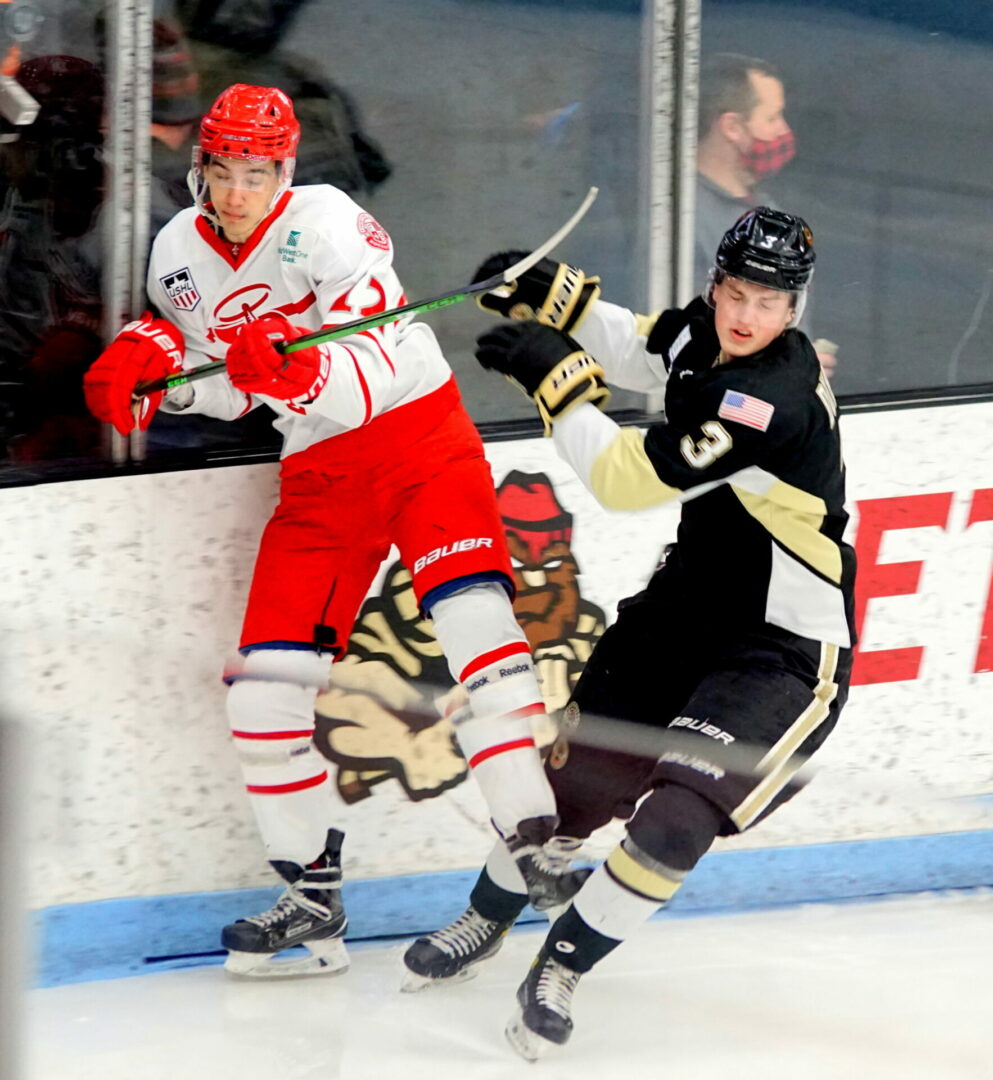 Hamilton was happy with the entire team effort. The coach sees his team score a lot of goals on a regular basis, and he’s happy to know the Jacks can also win the tight games.

“That was a complete hockey game tonight,” Hamilton said. “We played a full 60 minutes and did not give up much. When we did make a mistake, our goalie helped us out. We had a ton of chances, but their goalie was good tonight. We stayed with it, and that was (like) playoff hockey tonight.”

The red-hot Lumberjacks, who have won 16 of their last 18 games, are now 32-13-3 on the season, good for 67 points in the USHL’s Eastern Conference standings. They remain in second place in the conference, just two points behind first-place Chicago with six regular season games remaining.

Muskegon will look to complete the sweep of the three-game home series against Dubuque on Saturday night. Faceoff is slated for 7:10 p.m. at Mercy Health Arena.

There was no scoring in the first period on Friday. The Lumberjacks outshot Dubuque by a 10-5 margin, and killed off both of the Fighting Saints’ power play opportunities.

Muskegon had a chance to get on the scoreboard early in the second period, when Dubuque was whistled for two penalties. The penalties overlapped for nearly a minute, giving the Jacks a two-man advantage for 54 seconds, but they failed to take advantage.

The Lumberjacks finally ended the scoring drought 10:22 into the second period on a breakaway goal by Owen Mehlenbacher, who moved the puck down the left side of the ice and snapped it home just past the hash mark between the circles.

Muskegon had a chance to increase its lead late in the second period with a couple of power plays, but again failed to capitalize.

The Lumberjacks held a slim 1-0 lead heading into the third period.

That remained the score until late in the game, when Dylan Wendt and Philip Tresca collected open-net goals at 18:38 and 19:11, respectively, after Dubuque pulled its goal for an extra attacker.

The Lumberjacks outshot Dubuque by a 37-22 margin.

Owen Mehlenbacher leans to cut in front of the Dubuque defender. Photo/Leo Valdez

Danil Gushchin controls the puck before making a pass for Muskegon. Photo/Leo Valdez

Tyler Dunbar follows through after making a pass for Muskegon. Photo/Leo Valdez

Jan Skorpik gets ready to catch the puck for Muskegon. Photo/Leo Valdez

Philip Tresca looks across the ice between periods for Muskegon. Photo/Leo Valdez