MUSKEGON – From this point on, every game is pretty important for the Muskegon Lumberjacks, and losses to lesser teams are costly.

In the end they could mean the difference between first and second place.

The Jacks missed a golden opportunity to keep pace with the Chicago Steel in the USHL Eastern Conference championship race on Saturday when they lost to the lowly Dubuque Fighting Saints 3-2 in the final regular season home game at Mercy Health Arena.

Muskegon fell to 32-14-3, good for 67 points in the Eastern Conference standings. Chicago, which beat Youngstown on Saturday, now has 71 points, and both teams have five games remaining on the regular season schedule.

The Jacks’ goal is to pick up wins against the two worst teams in the Eastern Conference – Dubuque and Youngstown – to set up a possible showdown for the title in Chicago in the last two games of the regular season. 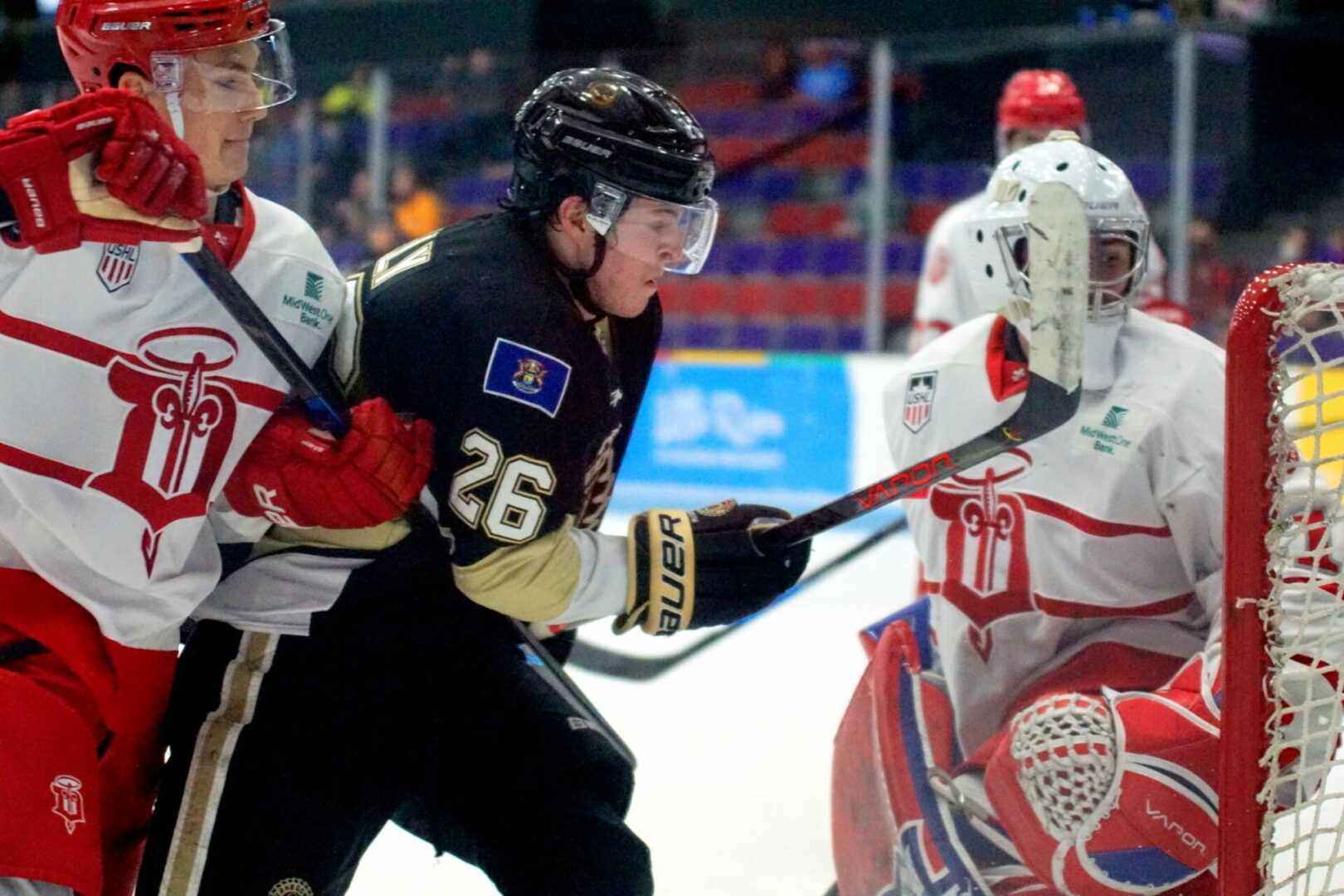 Muskegon’s No. 26 Tanner Kelly battles for the puck near the goal. Photo/Leo Valdez

Muskegon accomplished its goal on Friday and Saturday with wins over Dubuque in the first two games of the weekend series, but had trouble finding the net on Saturday, and fell four points (two wins) behind Chicago.

They play next Friday and Saturday in Youngstown against the last-place Phantoms, then on  April 22  in Dubuque, before wrapping up the schedule with games in Chicago on April 23-24.       .

Despite the frustrating outcome on Saturday, Muskegon Coach Mike Hamilton did not seem overly concerned after the game. He gave a lot of credit to Dubuque goalie Lukas Parik, who stopped 32 of 34 Lumberjacks shots in the game, and also did a great job of slowing the Jacks’ offense on Friday. 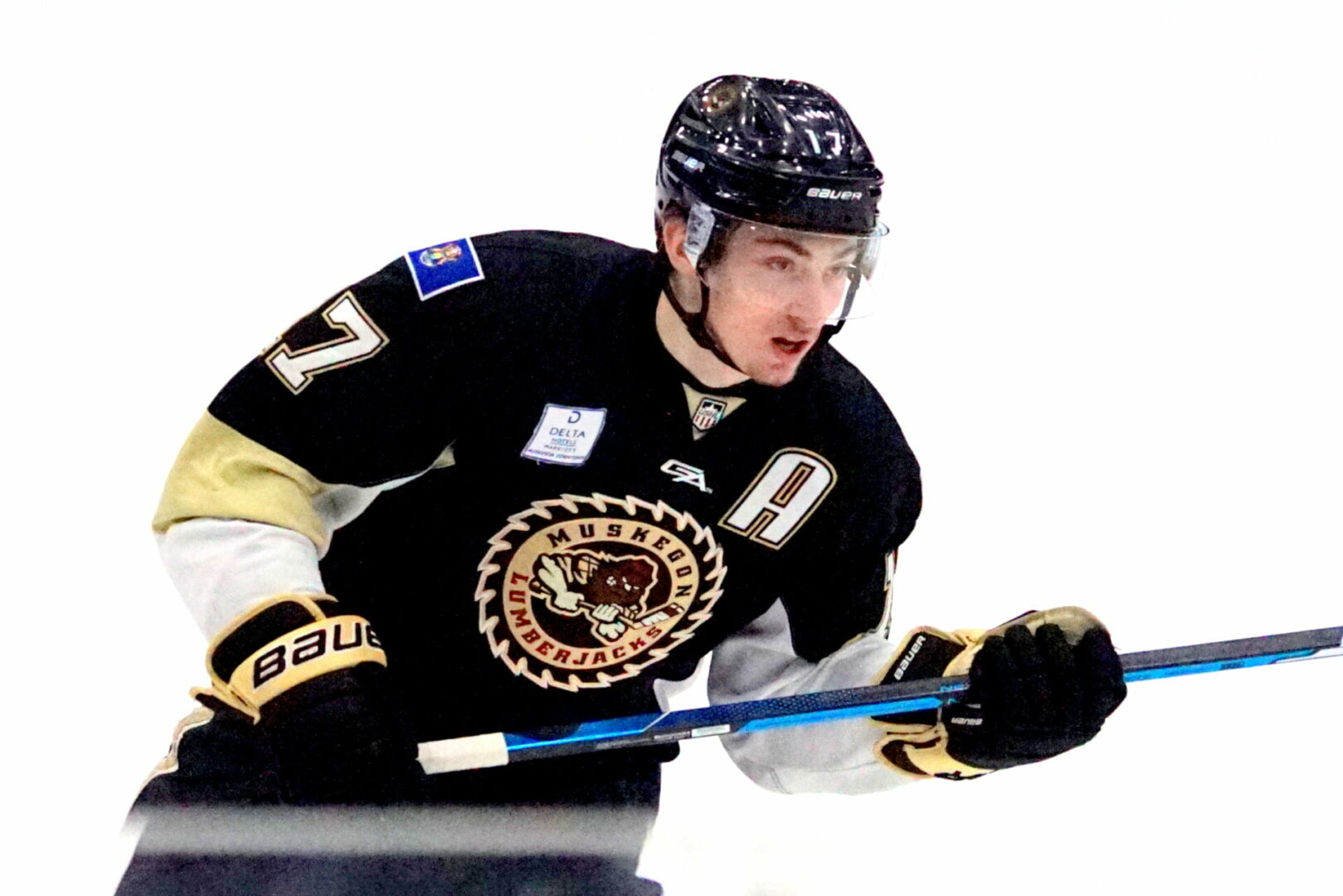 “Their goalie played really well and made a lot of saves,” said Hamilton. “We got into a little penalty trouble with some questionable calls, but at the end of it, it is what it is. We got to make sure we kill those (penalties) off and move forward. We battled in the third really hard.”

There was no scoring in the first period for the second straight night.

Brad Marek broke the deadlock with a nice backhand goal just 21 seconds into the second period, giving Muskegon a 1-0 lead.

Dubuque tied the game up with a power play goal from Henry Thrun at 5:06 of the second. The Fighting Saints added another power play goal, from Paul Fletcher, at the 8:12 mark to take a 2- 1 lead.

Thrun scored his second goal of the game at 13:16 of the second period, and the visitors suddenly had a 3-1 lead.

Muskegon’s Nick Portz gave the home fans some hope with a minute left in the second period,  when his high wrist shot from the right circle found the mark on a Lumberjack power play, making the score 3-2. 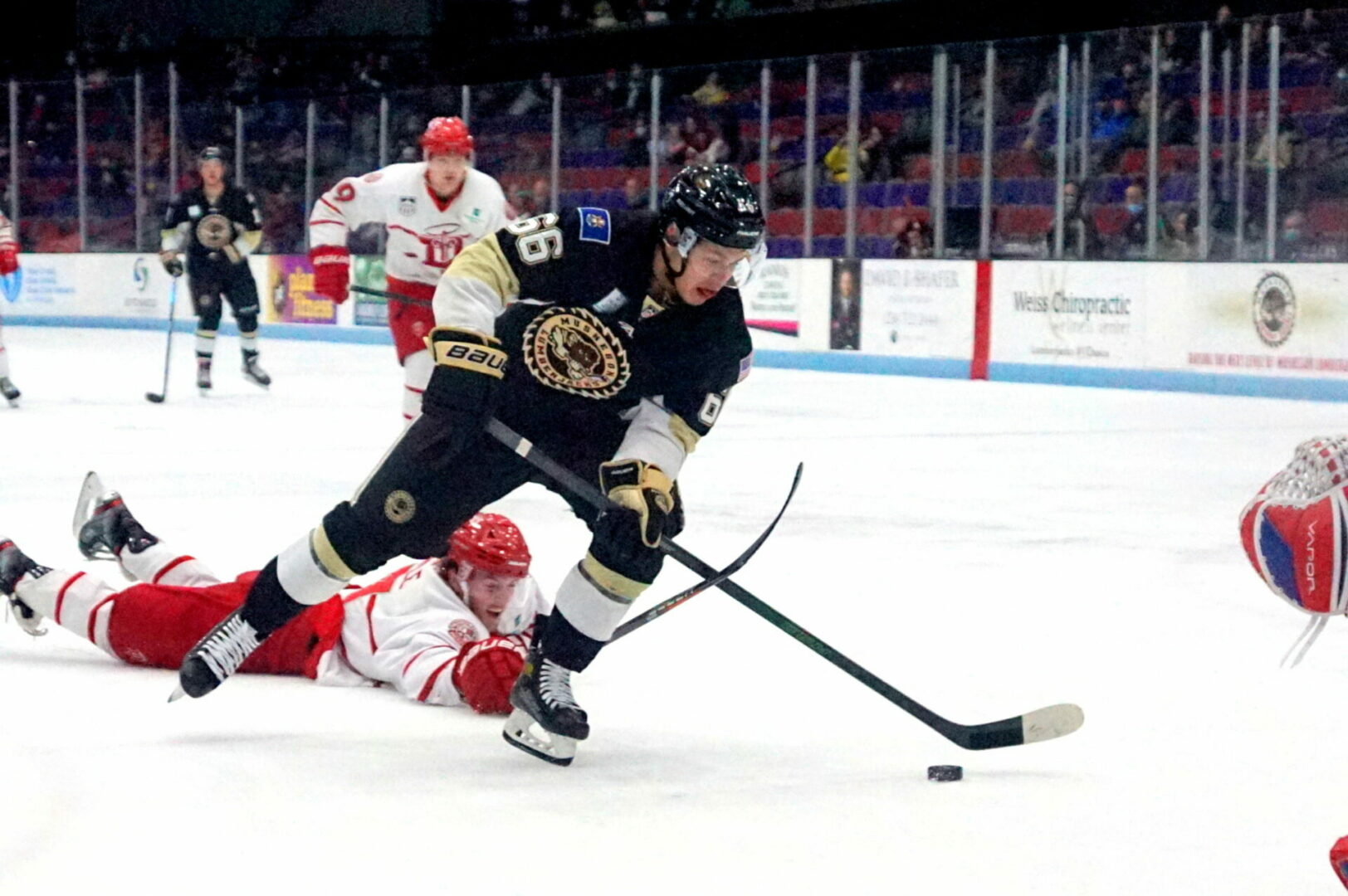 The third period was scoreless. The Jacks had numerous chances to tie the game and send it to overtime, including two power play opportunities they failed to cash in on.

The Jacks had a very close call in the final minute when a crowd of players crunched together in front of the Dubuque net fighting for a loose puck. The Lumberjacks thought the puck might have gone into the net, because a replay showed Parik reaching back like he was pulling something out of the goal mouth, but the referees reviewed the video and said there was no score.

“We thought the puck was in,” Hamilton said. “The problem was they couldn’t spot the puck (on the replay video). The goalie reached into the net and pulled something out, but we couldn’t tell if it was the puck or if it was right under him.”

Muskegon continued the pressure Dubuque all the way to the end of the game – and outshot the visitors 16-4 in the final period – but none of those shots went in.

The Jacks had a 34-27 advantage in shots on goal in the game. Muskegon goalie Nate Reid stopped 24 of 27 shots in the losing effort.

Jack Williams moves the puck across the ice for Muskegon. Photo/Leo Valdez

Nick Portz gets back for Muskegon. Photo/Leo Valdez

Muskegon’s No. 26 Tanner Kelly battles for the puck near the goal. Photo/Leo Valdez