WMC’s Taylor Folkema steadily improved her skills, poured in the points, until she became the team’s all-time scoring leader

NORTON SHORES – Just three short years ago, it would have been hard to believe that Western Michigan Christian’s Taylor Folkema would become the team’s all-time career leading scorer.

She only scored 88 points as a freshman – which is not bad at all for a ninth-grader on varsity – but provided no hint of the great things she would accomplish in future years. 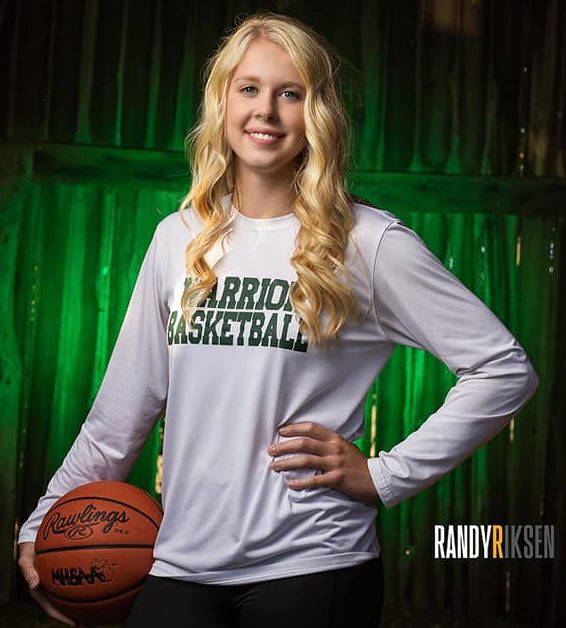 “Her freshman and sophomore years, she was basically all layups,” said Warriors head coach Jeremy Goorman. “Since then, her mid-range game has become awesome and she’s improving her three-point shot as well.”

That’s pretty clear when looking at the numbers.

Folkema started finding the bucket and piling up the stats in her sophomore season, when she averaged 19.5 points, five blocks and 2.5 steals per game. Her emergence helped make up for the graduation loss of All-Stater Aubrey Goorman, the team’s previous leading scorer.

She stayed pretty consistent as a junior, averaging 18.2 points, five rebounds and three steals per game. She was an honorable mention pick for the Basketball Coaches of Michigan “BCAM’S Best” Division 3 All-State team.

All of those points finally added up, and by the time this very late season finally began, she was within reach of the school’s all-time career points record.

Folkema, who started this week with 1,077 career points, reached that lofty status on Feb. 20 against Calvin Christian. She passed Laura Karsten, the former scoring champ who finished with 1,011 points.

Folkema finished with 22 points in that landmark game, and also had eight rebounds, four steals and four assists. 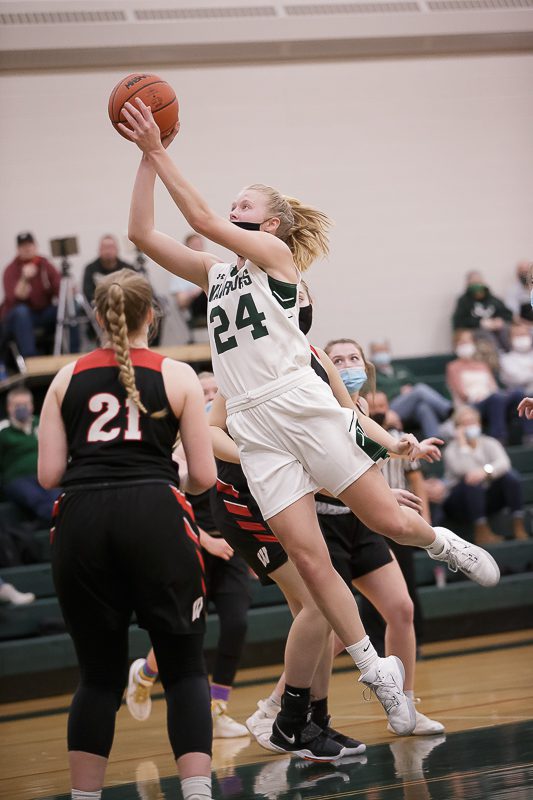 The four-year varsity player Folkema explodes up for a shot in the lane for WMC. Photo/Randy Riksen

“The biggest memory will be the beginning of the game,” said Folkema about the night she broke the record. “The team said, ‘We’re going to get these points for you.’ Any time I scored, my team knew how close I was. That will be what I remember the most, how selfless and happy my team was for me.”

Folkema admits that the record kind of snuck up on her and took her by surprise.

“I wasn’t expecting it,” she said. “It’s very exciting, and I couldn’t have done it without my teammates and coaches. It’s been the highlight of my year to play with them and break the record.”

Part of what helped Folkema reach the top of the scoring list is her ability to keep the defense guessing. She can do a lot of things with the ball she couldn’t do in the past, and hurts opponents in several different ways.

“Previously they knew I couldn’t shoot,” Folkema said. “They would always leave me space. But now that I can shoot better, they play a little tighter. They never really know what to expect, if I’ll shoot or take it to the rim.”

While scoring catches headlines, Folkema also contributes in a lot of other ways. She is a complete player, averaging 19 points, 5.2 rebounds, 5.5 steals and 3.5 assists per game so far this season.

She really showed off her scoring ability in a Feb.19 game against Manistee, when she put in 30 points on the night she reached the career 1,000 point mark. She showed off her diversity of skills in a comeback win over Covenant Christian, rolling up six steals, six assists and five blocks.

“Being a team player is huge,” said Folkema. “I’d say I’ve really improved my passing a lot, along with my dribbling.”

Folkema’s ability to do multiple things isn’t lost on her coach.

“Her court vision has really improved,” Goorman said. “She’s really worked hard on finding her teammates for passes. When help defense comes, she’ll dish it off and some of her passes are incredible. I think the most important thing for her is being unselfish.”

Folkema’s development over the past few years has been the result of a lot of long days of hard work. She drives to Western Michigan Christian High School in Norton Shores from her home in Grant every day, and during the season has practice or games after school, before making the long drive back home every night.

“I travel an hour to school every day,” Folkema said. “I drive myself and a few other people with me. Out of the group, I’m the only driver. It’s a little bit of drive. We’ve gotten used to it. It’s become our normal. 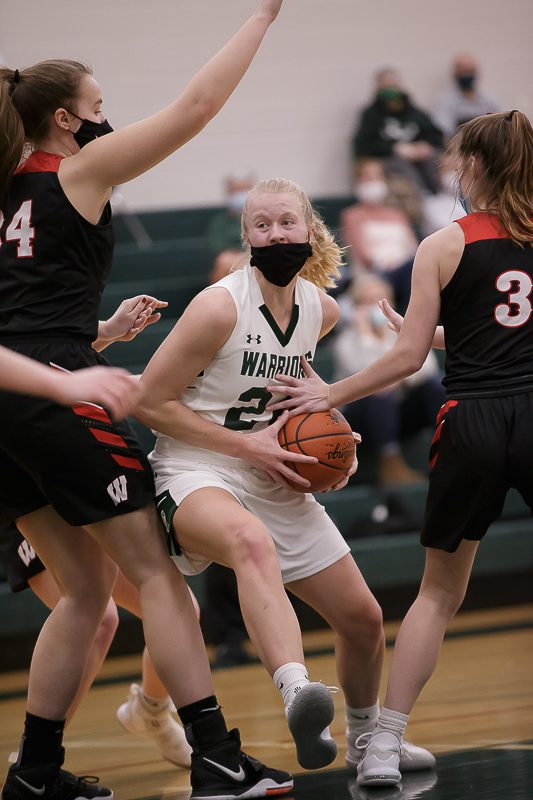 Folkema cuts through the lane during the Warriors win over Whitehall on February 27. Photo/Randy Riksen

“The thing that makes me continue to go every day is my friends, for sure. I love my basketball team. It gives me something to look forward to. It allows me to do the thing I love the most. It motivates me for sure.”

Folkema’s hard work, production and leadership abilities are part of the reason why the talented Warriors are currently 9-1 overall on the season and 4-1 in Lakes 8 Conference play.

“When she talks, they listen,” Goorman said about Folkema’s influence on her teammates. “You can really tell that the other girls respect and like her a lot. When she was close to the record, they were all cheering her on and trying to get her the ball.”

Folkema has a few team goals she would like to fulfill before graduating and moving on to study and play basketball at a still unchosen college.       .

She would like to see the Warriors win at least a share of the Lakes 8 Conference title, after finishing second to Ludington last season. They currently trail the Orioles by one game in the conference standings.

“Right now, we really want to be conference champs,” said Folkema, whose team lost to Ludington 45-32 on Feb. 23. “Especially with being a senior, we’ve always kind of lost to Ludington and we have one more game to get them. It’s one of my biggest goals.”

Her other goal is to lead her team to a long run in the upcoming state tournament. Last year the Warriors did well, beating Saugatuck to capture a Division 3 district title, but they were eliminated one game later by Ithaca in the regional semifinals.

Folkema was off in that game, scoring only nine points, nearly 10 under her per-game average. She took the loss personally, and said it has helped to motivate her this season.

“I thought about it all the time in the summer,” she said. “It wasn’t a good end. I was off. I told myself I’m not going to let that stop me. When that happens again, given the opportunity, I’ll push myself to the best of my ability to redeem myself. It’s kind of what drives me the most, the thought of doing better and being the best I can be.”