Surprise! Muskegon Heights boys take the court for their first game of the season, a competitive 59-50 loss to WMC

In a very strange basketball season full of surprises, the latest arrived on Tuesday night, when the Muskegon Heights boys basketball team played a game.

The Tigers had their belated season opener against a good Western Michigan Christian squad, and WMC came away with a 59-50 victory. 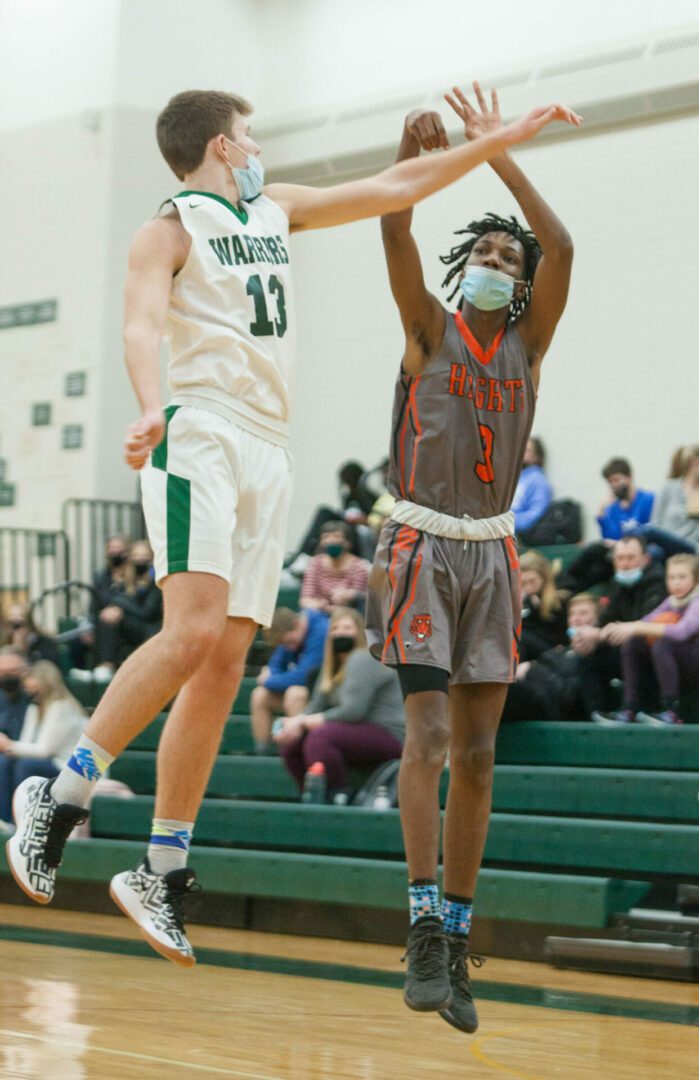 Muskegon Heights Academy announced months ago that it was skipping the winter sports season, like it did the fall, due to ongoing concerns about COVID-19. But the school’s Board of Education recently gave the teams the green light to start late, so the Tigers finally hit the court.

The Muskegon Heights girls team also opened against WMC on Tuesday, and lost 70-18.

The Heights boys team didn’t do badly at all, considering it only had five days in the gym before facing a team that already had played eight games.

The Tigers trailed 13-9 after one quarter, but outscored the Warriors 15-7 in the second to take a 24-20 lead at halftime. WMC gained its winning margin in the third quarter with a 21-10 advantage. 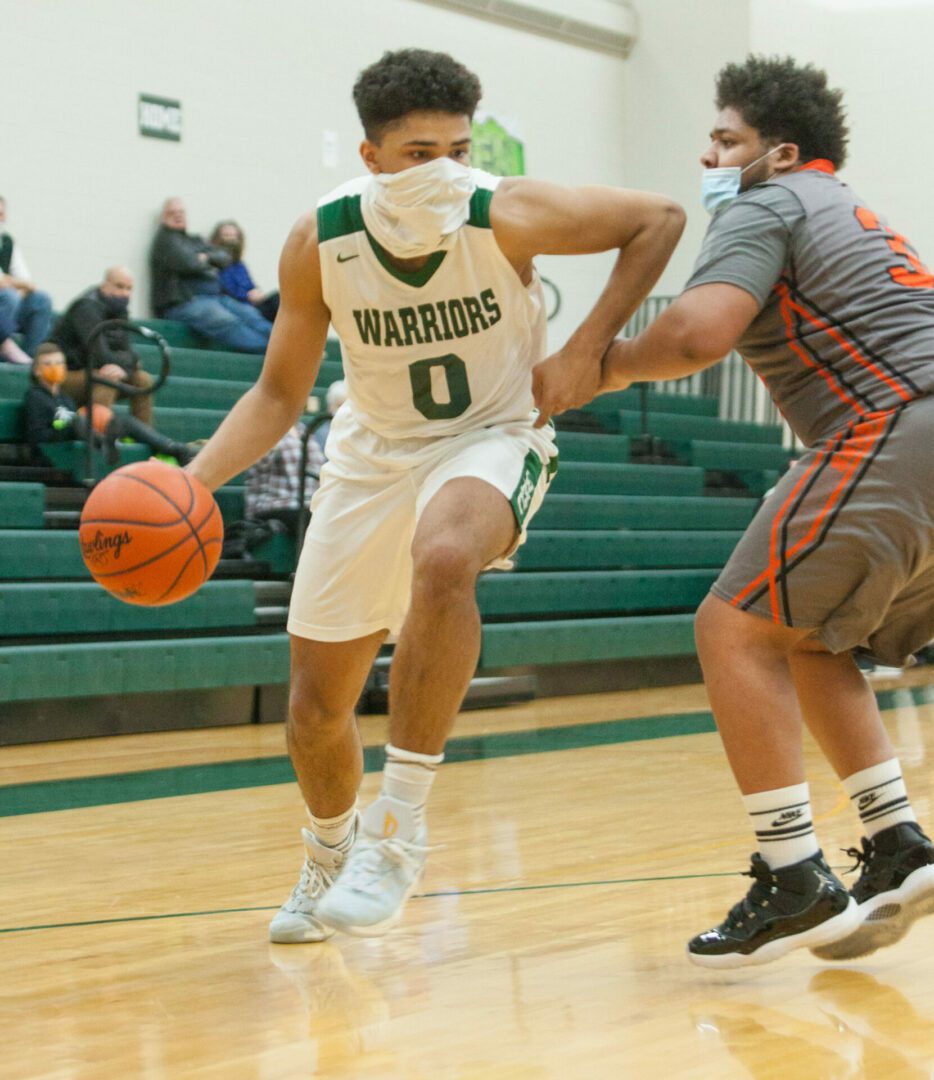 After the game, longtime Muskegon Heights coach Del Stewart said it was exciting to be playing again, even at this late point in the season.

“Our board had a meeting a week ago or so, and it was proposed and approved,” Stewart said. “I didn’t really have an opportunity to have a tryout, but we brought back the guys from last season and we brought in the lower level kids.

“At first I was skeptical. My initial thought was the timetable. You want to try your best to put kids in the right situation for doing well. Many of the kids and I hadn’t had any connection in terms of basketball since last March. I had been online with them but not in person, and had not had any basketball instruction with them in person. I didn’t want anyone to get hurt being under-conditioned. 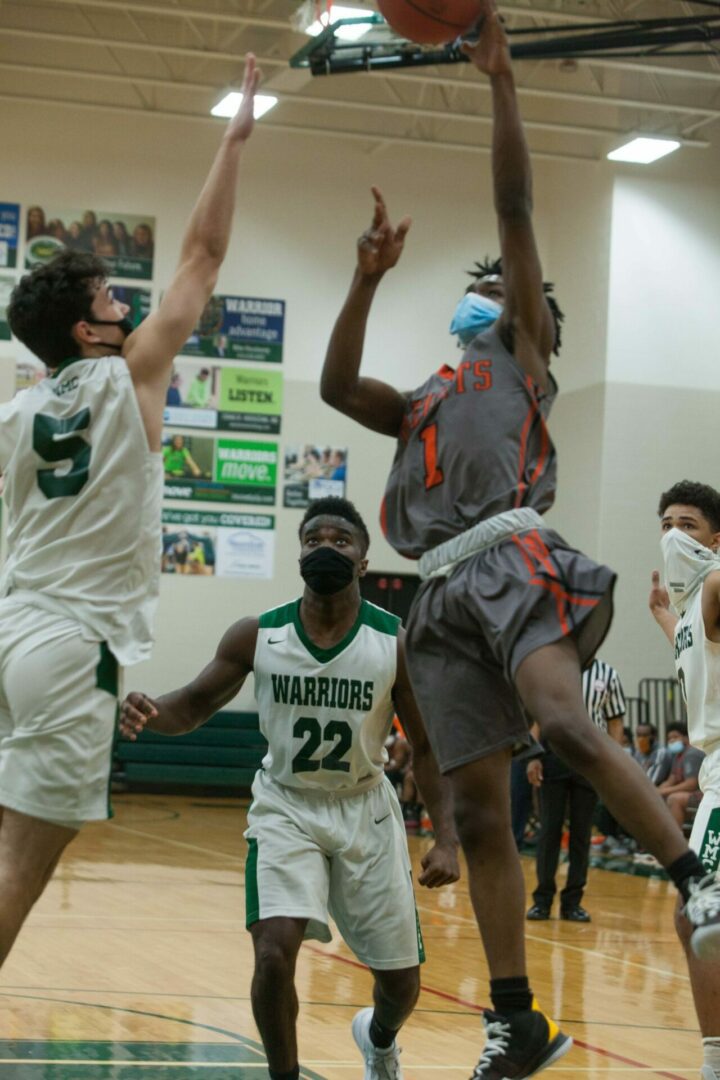 Curtis Huges goes up for a layup against WMC’s Isaac Parker. Photo/Jason Goorman

“But when I was meeting with parents and talking with kids, they were all very excited. They have been looking and asking for that type of discipline that sports bring, and wanted their kids back on the court. Their attitude spiked when they saw they were about to be playing sports again for Muskegon Heights.”

Due to the team’s late start, the Tigers will not be able to compete for the Lakes 8 Conference championship this season. But Stewart said the other conference schools, including WMC, were very receptive about fitting Muskegon Heights into their schedules and giving the Tigers an opportunity to play.

“We’re just playing to play right now,” Stewart said. “I took the liberty of keeping our Lakes 8 conference aware that we might be playing again. By no means did we expect them to allow us to compete in the conference standings. We understand we are eliminated, but we appreciate them for helping us get back into the flow, period.”

Stewart said he was favorably impressed with his team on Tuesday, considering the amount of rust the players still have to shake off before they are in full season form.

“We didn’t look like we just started,” the coach said. “We had some good chemistry that existed from last season and it continued tonight. We want to just build on this. I told them before we even left the school and distributed jerseys that we had already won because they were going to be playing. And we looked very good tonight.”

Muskegon Heights’ No. 4 Da’Kari Edwards looks to spot up from behind the arc. Photo/Jason Goorman

WMC’s Owen Varnado goes up for a shot in the paint against a whole bunch of Tigers. Photo/Jason Goorman