Reeths-Puffer boys lose a big lead, then recover to stun Muskegon 81-79 in a double-overtime conference thriller

MUSKEGON TWP. – The Reeths-Puffer boys basketball team has had its share of close losses to some really good teams this season, and came into Tuesday’s matchup against Muskegon one game below .500.

The game turned out to be another tight  one for the Rockets, but this time they got the job done, recovering after blowing a late 16-point lead and stunning the Big Reds 81-79 in a double-overtime thriller at Reeths-Puffer High School. 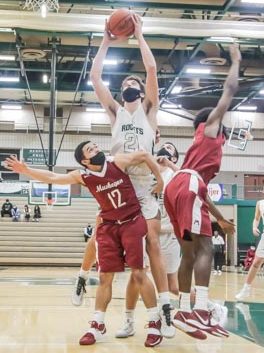 The outcome cost Muskegon a chance to win an outright O-K Green conference championship. The Big Reds came into the game one game behind first-place Zeeland East, the team they host on Friday.

But the upstart Rockets got in the way by building a big lead, losing it, then regaining their composure in two overtime periods.

“It’s amazing,” said R-P senior Kaleb Mitchelson about his team’s biggest win of the season, and probably several years. “We’ve been in a lot of tight games. They’re a really great team and we showed we’re a good team too. It’s a great way to finish.”

“We’ve played a lot of good teams, but we just couldn’t find a way to win, and then it was kind of the same story in the fourth quarter tonight, but we found a way to get it done,” said R-P Coach Lance Johnson, whose team is now 8-8 overall and 7-6 in conference play. “We’re hitting our stride right now.”

With the score tied at 62-62, Mitchelson appeared to hit a step-back three-pointer with just 5.5 seconds left in regulation, which likely would have given the Rockets the victory without the overtime drama.

Muskegon’s No. 11 Ethan Hill loses the ball in the lane between Kendall Smith. Photo/Joe Lane

But a three-second violation on the play wiped out the shot and gave Muskegon the ball with a chance to win in regulation.

Muskegon’s Anthony Sydnor III took the inbounds pass and drove the length of the court, but was called for a charge with 1.3 seconds remaining, sending the game to the first OT.

Mitchelson tied the game at 68-68 with two free throws with 1:32 remaining in the extra session. The Big Reds stalled out the rest of the clock before a Jordan Briggs three-point attempt that would have won the game clanked off the rim, sending the game to double-overtime tied at 68-68.

The Rockets led off with a 5-0 run that gave them a 73-68 lead with 2:41 remaining. Then Johnson, the R-P coach, was called for a technical foul after attempting to call time out while being too far out of the floor

Reeths-Puffer Coach Lance Johnson talks with his team during a timeout. Photo/Jason Goorman

R-P responded when freshman Jaxson Whitaker knocked down his seventh three-pointer of the night with 1:27 remaining to give the Rockets a 78-76 lead.

The two teams traded shots at the free throw line, and R-P led 81-79 with 7.6 remaining. After a missed free throw by the Rockets, Briggs took the ball up the court and shot a floater just inside the free-throw line that bounced off the rim.

The Rockets grabbed the rebound as time expired, sending the Reeths-Puffer gymnasium into a frenzy as students stormed the court to celebrate.

The Big Reds came into the game with an outside shot at winning the outright championship in the O-K Green. They could still win a share of the title if they beat Mona Shores on Thursday and Zeeland East on Friday, provided Zeeland East loses to Wyoming on Thursday.

But that’s a big if, and there’s a chance that Muskegon’s seven-year conference championship streak, which dates back to 2013-14, could come to an end.

“It don’t matter,” said Muskegon Coach Keith Guy, whose team is 11-5 overall and 10-2 in conference play. “In the grand scheme of things, I want to win in the tournament. A conference championship is nice, but if I had to choose which championship I want, I’d go for district because we’d continue to play.”

The Big Reds were set back from the start on Tuesday, trailing 18-10 after one quarter. Whitaker and Smith each had six points in the opening eight minutes while Kalil Stimage had four points to lead the Big Reds.

The second quarter was the Mitchelson show, with the senior point guard totaling 10 points to put the Rockets up 32-23 at halftime.

In the third quarter, it appeared that Reeths-Puffer might run away with the game, outscoring Muskegon 18-11 to take a 50-34 lead at the buzzer. Whitaker knocked down three triples in the quarter while Muskegon was led by Sydnor III with five points.

“It felt great,” said Whitaker about his touch from the three-point line. “Once we start moving the ball around and getting open shots, my shot feels a lot better.”

Following a Smith basket with 3:51 remaining in regulation, Reeths-Puffer held a 60-44 lead and appeared poised for victory.

“We played great for three quarters, then we had a couple brutal turnovers and a couple quick shots,” Coach Johnson said  “We got to do better protecting the lead, but our guys played well, and we did enough to win.”

Coach Guy said he was happy with the inspiring late comeback.

“I’m walking out of here feeling pretty good,” he said. “Our guys fought through adversity and they fought over and over. They gave themselves a chance to win and that’s all you can ask.”

The Rockets were led by Smith with 22 points and 13 rebounds while Mitchelson totaled 21 points and nine assists. Whitaker finished with 21 points.

Muskegon was paced by Briggs with 24 points while Ethan Hill totaled 18 points and 15 rebounds.