R-P seniors Smith and Mitchelson helping Rockets finally live up to their potential, just in time for the tournament

MUSKEGON TOWNSHIP – It didn’t clinch a championship, and there was no trophy presentation afterward, but as far as potential season-altering victories go,

there was none bigger than what Reeths-Puffer experienced Tuesday evening at home against rival Muskegon.

The Rockets’ thrilling, double-overtime 81-79 victory over the Big Reds not only established Reeths-Puffer as a team to be feared in next week’s Division 1 district tournament in their home gym, but also cemented the Rockets’ senior duo of Kendall Smith and Kaleb Mitchelson as arguably the top 1-2 punch in the area. 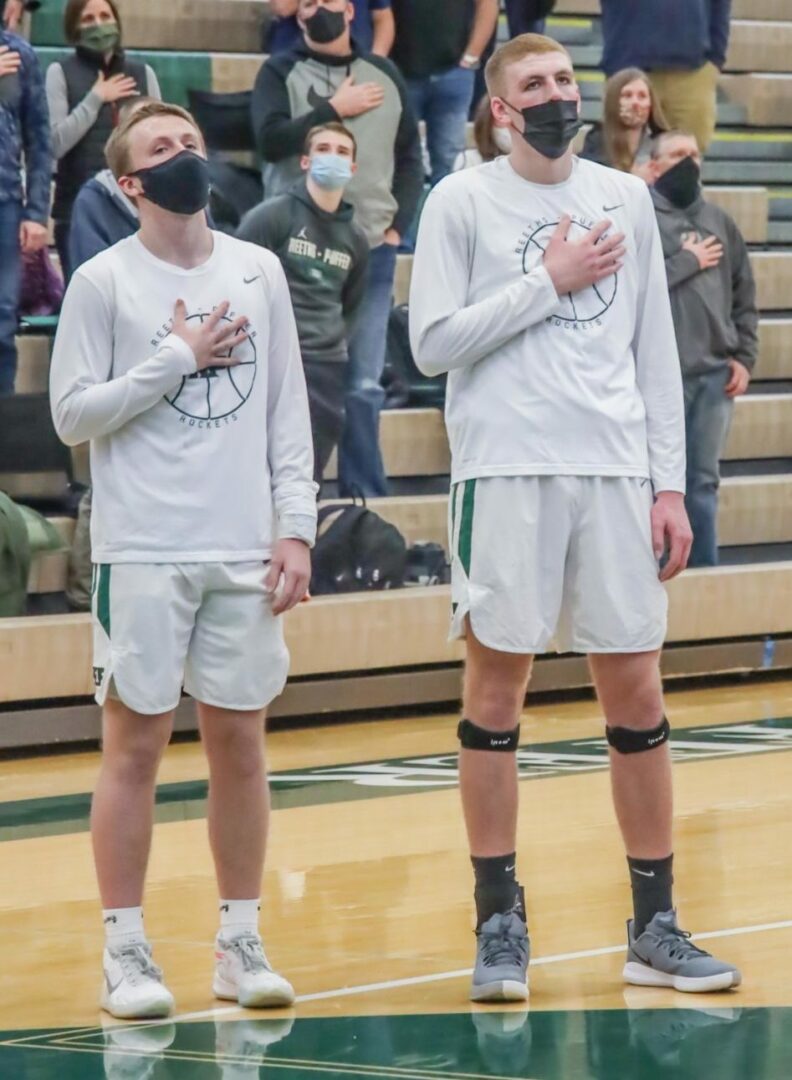 Kaleb Mitchelson (left) and Kendall Smith stand at attention for the national anthem before a game. Photo/Joe Lane.

Against the Big Reds, Smith, a 6-foot-8 stretch forward, and Mitchelson, a 6-1 point guard, combined for 43 points. That continued a positive trend. During their last eight games, they’ve combined to average nearly 35 points a game.

Tuesday’s win also strengthened the Rockets’ confidence about beating quality opponents in close games. Many times this season they have faltered in the second half, resulting in a modest 8-8 record. The results over the past month could have shaken quite a few players, considering the gut-punch outcomes:

A tight 6-point setback against league foe Wyoming. A triple-overtime loss to O-K Red power Rockford. A last-second buzzer-beating loss to Zeeland West. A setback against undefeated Zeeland East, when the Rockets trailed by just four points at halftime.

“For whatever reason, in a lot of games we’re coming out flat in the second half,” Smith said. “The third quarter is a very critical time of any game, and we’ve got to find a way to avoid that lull. When we’re out and running and our energy level is high, that’s when we’re at our best. We need to bring that energy throughout the entire game.”

Smith said playing with high intensity comes naturally around Mitchelson, the Rockets’ four-year varsity point guard who is currently averaging a shade under 16 points and 4.5 assists per game.

“I’ve played with Kaleb for such a long time,” Smith said. “As our point guard, he’s such a big part of our team’s success. He’s worked a lot on his shooting and he’s always making nice passes. He’s such a facilitator out there in getting guys open looks and getting up and down. He’s a fun threat to have.”

Mitchelson has also seen Smith grow by leaps and bounds, on and off the court. Smith has grown six inches since his freshman year. This season he has tallied 10 double-doubles and is averaging 13.4 points, 9.9 rebounds and 1.5 blocks a game. 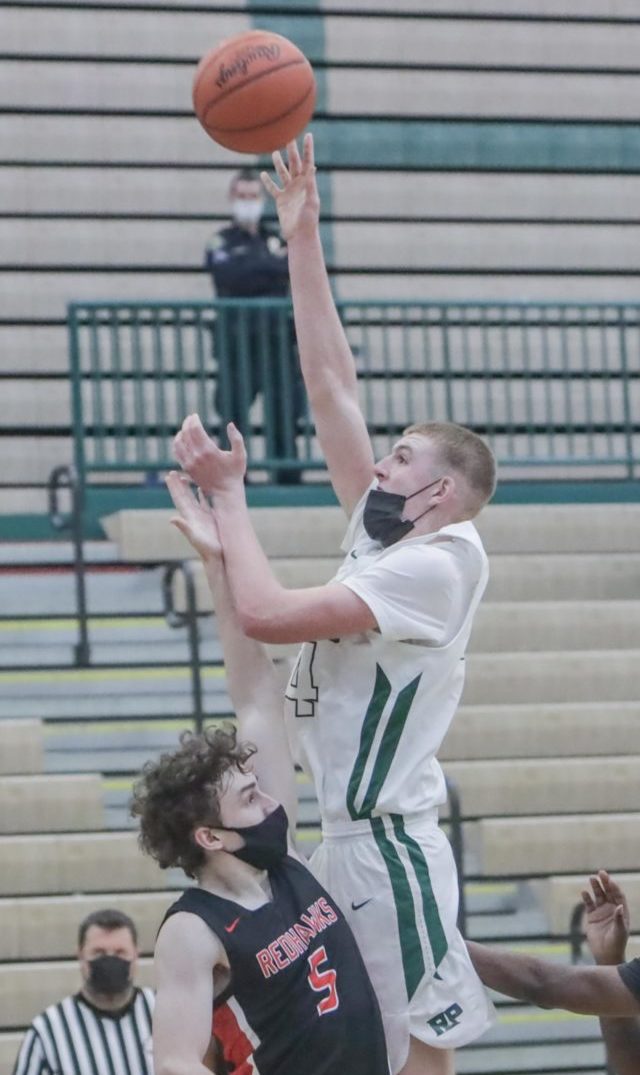 Reeths-Puffer’s Kendall Smith puts up a hook shot in the paint for Reeths-Puffer. Photo/Joe Lane

“Kendall has grown enormously as a player,” Mitchelson said. “We had a little travel team in like fifth or sixth grade and he was still little, and you’d see him struggle. But it’s been great to see him grow into himself and really develop as a player. He’s become one of my closest friends.”

Although there’s about a six inch difference between the two, Smith and Mitchelson have a lot in common on the hardwood. Both developed a passion for the sport from their fathers. Smith’s dad, Matt Smith, was a standout at Orchard View, and played collegiately at Muskegon Community College and then Lake Superior State.

“He’s the same size as I am, 6-8, but he told me once I get to college, everyone is big,” Smith said about his dad. “So that’s why I’ve really tried to spread out my game offensively and really work on my outside shot. I definitely wanted to diversify my game.”

“One of the biggest tips he ever told me was there’s things you can control on the court and things you can’t. There’s things that are controllable like energy and hustle. There’s some nights where your shot isn’t falling, but you can always bring that extra effort.”

Mitchelson said the sport has always been “a part of what I do,” because his dad, Tim, was a local coach for several years. He was an assistant  under Keith Guy at Muskegon Heights for four seasons, and then was the head coach at Reeths-Puffer for six years.

“I was just always there, always around the game,” Mitchelson said.

Mitchelson and Smith have grown up in the Rockets’ program and have played big roles in its resurgence in recent seasons. Mitchelson said he’s grown from a 5-10, 145-pound freshman to a near 6-2, 180-pound senior.

“Kaleb has been around four years, and he’s always been really skilled,” said Reeths-Puffer Coach Lance Johnson. “But he’s gotten stronger and added some inches to his vertical. He’s quicker off the dribble and he’s got a really good crossover. It’s hard for one guy to slow him down. 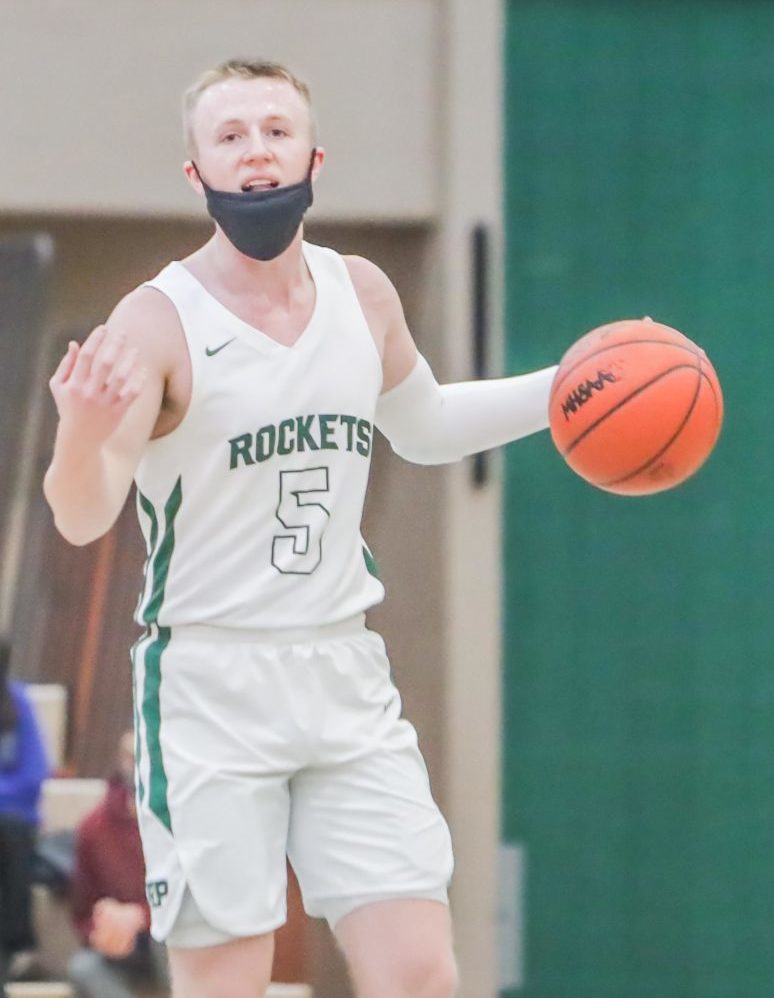 “Kendall has been kind of a late bloomer. Starting out as a freshman, he was maybe 6-1, 6-2, but he kept growing. Now he’s 6-8 and I think he’s really put it all together. It just took him some time to grow into that body.”

Smith and Mitchelson have made it a point to take the Rockets’ next generation – talented freshmen starters Jaxson Whitaker and Travis Ambrose – under their wings. Whitaker is the Rockets’ top outside shooter and connected on an amazing seven triples against Muskegon. Ambrose is a 6-7 center and is shooting nearly 65 percent from the floor.

“Jaxson is pretty much like my brother,” Smith said. “Our families vacation together. Both of them, as freshmen, they’re definitely ready to learn. There will be times when I’ll take an ice bath after practice and they’ll sit right by me and I’ll try to answer any question they have. I definitely want to be that vocal type of leader.”

Mitchelson said he believes Whitaker, Ambrose and other talented younger players will keep the program on the rise.

“To see where Reeths Puffer was, we had multiple 0-20 seasons,” he said. “My freshman year, we won nine games, then 17 and a winning season last year, and we’re approaching that again. To go from 0-20 to where we are now, I’m really proud of that. And you would think they would keep that going.”