Montague wins yet another nail-biter over Oakridge on Nichols’ game-winning triple in OT, advances to district semifinals

The Wildcats defeated Oakridge back in late February on a game-winning basket by Drew Collins late in regulation by a 50-48 margin, then beat the Eagles again last week 58-57 in overtime. 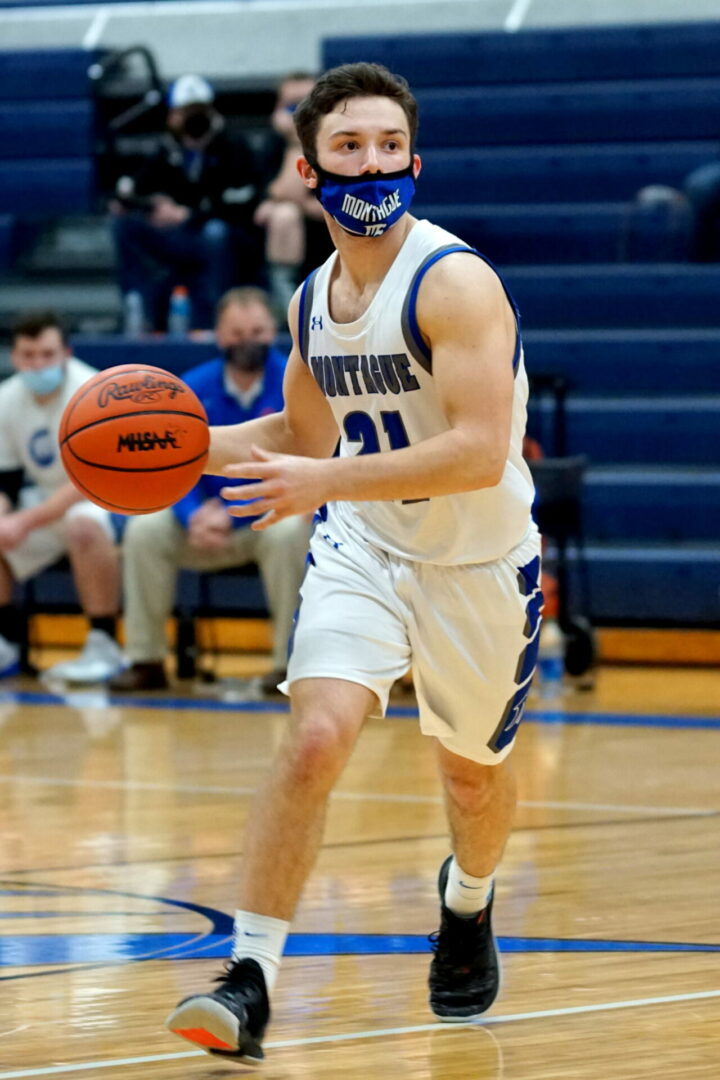 Montague continued that nail-biting trend on Tuesday night in the opening round of Division 2 district play. They rallied from a 12-point halftime deficit to beat the Eagles 66-63 in overtime on a game-winning three-pointer by Tugg Nichols with less than three seconds remaining.

It was the first district tournament win for the Wildcats since moving to Division 2 more than five years ago.

The Wildcats, now 11-5 on the season, will face West Michigan Conference champion Whitehall in the district semifinals on Thursday. Tip-off is slated for 7 p.m.

Oakridge ended its season with an 8-6 record.

“I just think we are evenly matched,” said Montague coach Dave Osborne about the three barn-burner games with Oakridge. “We match up well with their bigs and both of our guards are really good shooters. We defend each other well. We just happen to be on the fortunate end this year.” 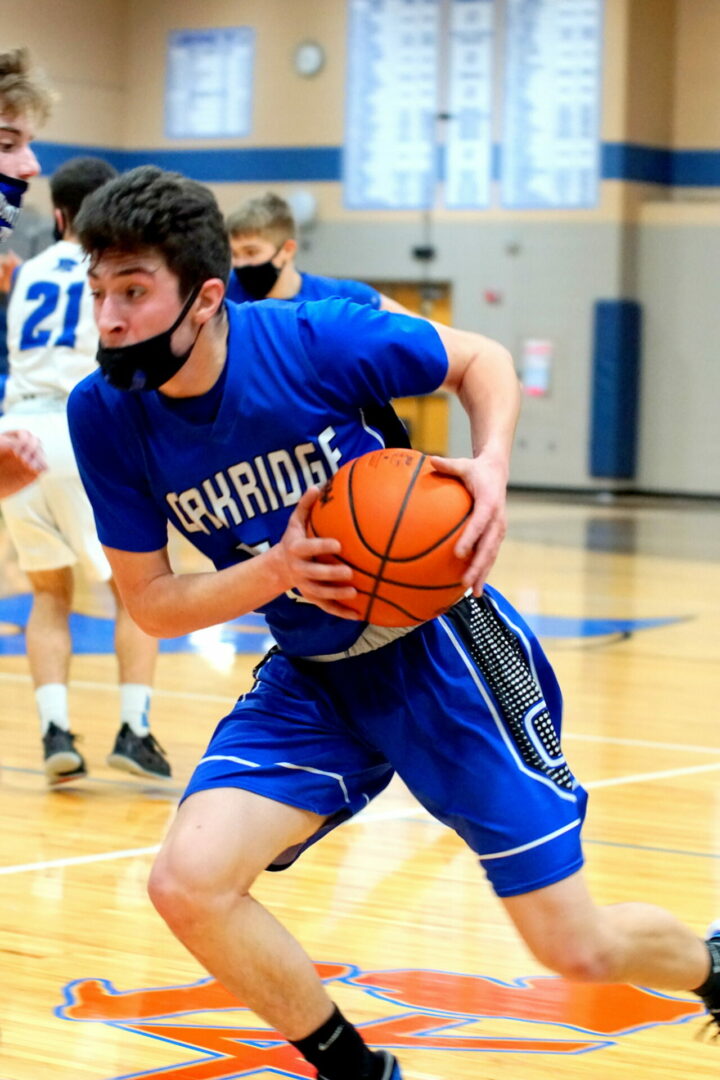 The Wildcats’ successful season and latest victory is even more impressive because they have been playing without injured junior guard Tate Stine, who averaged over 11 points a game last season.

“I think we probably lost at least 15 points per game this year because a lot of our offense would have run through him,” said Osborne about Stine. “It was a disappointing loss for us, but he has been ultra-helpful mentoring these young guys.”

Oakridge had control of the contest early on, jumping out to a 17-8 advantage after the opening quarter. Ethan Miller scored six points for Oakridge in the first eight minutes while Garrett Weaver added five.

The Eagles maintained that momentum, outscoring Montague 16-13 during the second quarter to take a 33-21 lead at halftime. Oakridge scored the final eight points of the first half to stretch a lead that was just 25-21 with 2:50 remaining.

The Eagles extended their advantage to 44-30 with 3:04 left in the third, but Montague closed put the quarter strong, scoring the last eight points to cut its deficit to 44-38 heading into the fourth frame.

Collins scored six points during the third quarter for the Wildcats while Nichols added five.

The Wildcats finally took their first lead of the night, 50-49, with 3:06 remaining in regulation on a three-point basket by Owen Raeth. 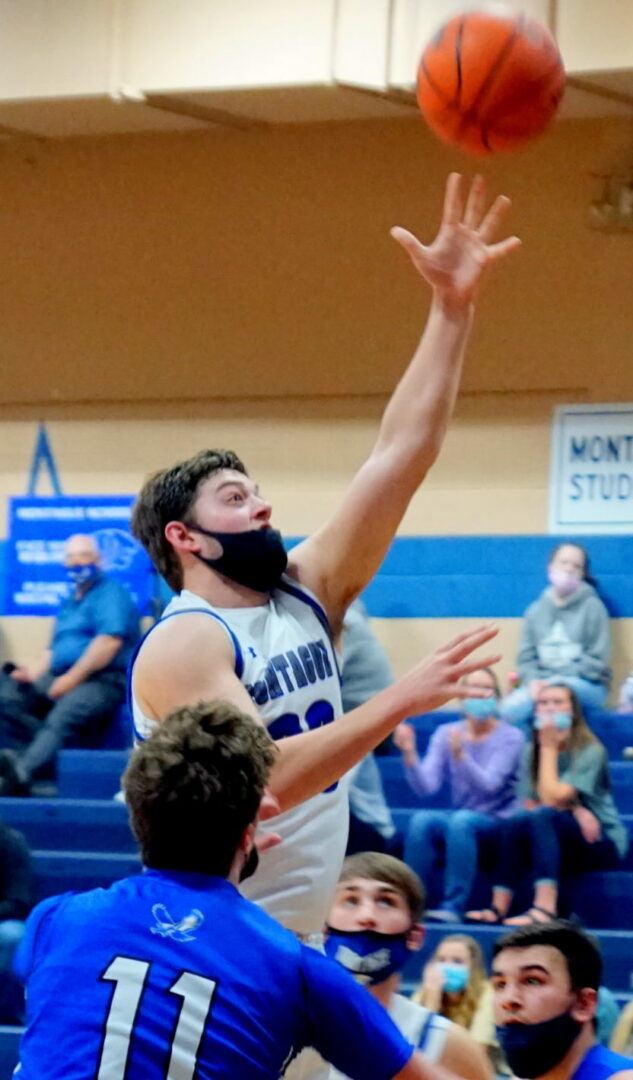 Drew Collins tosses up a shot in the paint for Montague. Photo/Leo Valdez

Montague remained in the lead 55-52 with 38 seconds left in the fourth, until Miller nailed the game-tying three-point shot for the Eagles with 22 seconds left, and the game went to OT tied 55-55.

Nichols made a two-point basket with 36.3 seconds remaining to cut Montague’s deficit to 62-60, then made a free throw to complete a three-point play and make the score 62-61.

Oakridge split a pair of free throws with 31 seconds left to increase its slim lead to 63-61. The Wildcats responded with a game-tying basket by Collins with 21 second left.

The Eagles were fouled with 18.2 seconds remaining but missed a pair of free throws to give Montague a chance for the win.

The Wildcats got the ball to Nichols, who was open in the right corner with six seconds left, and he nailed the game-winner with 2.6 seconds left on the clock.

Oakridge tried to tie the game with a shot from beyond the half-court line, but it fell far short. 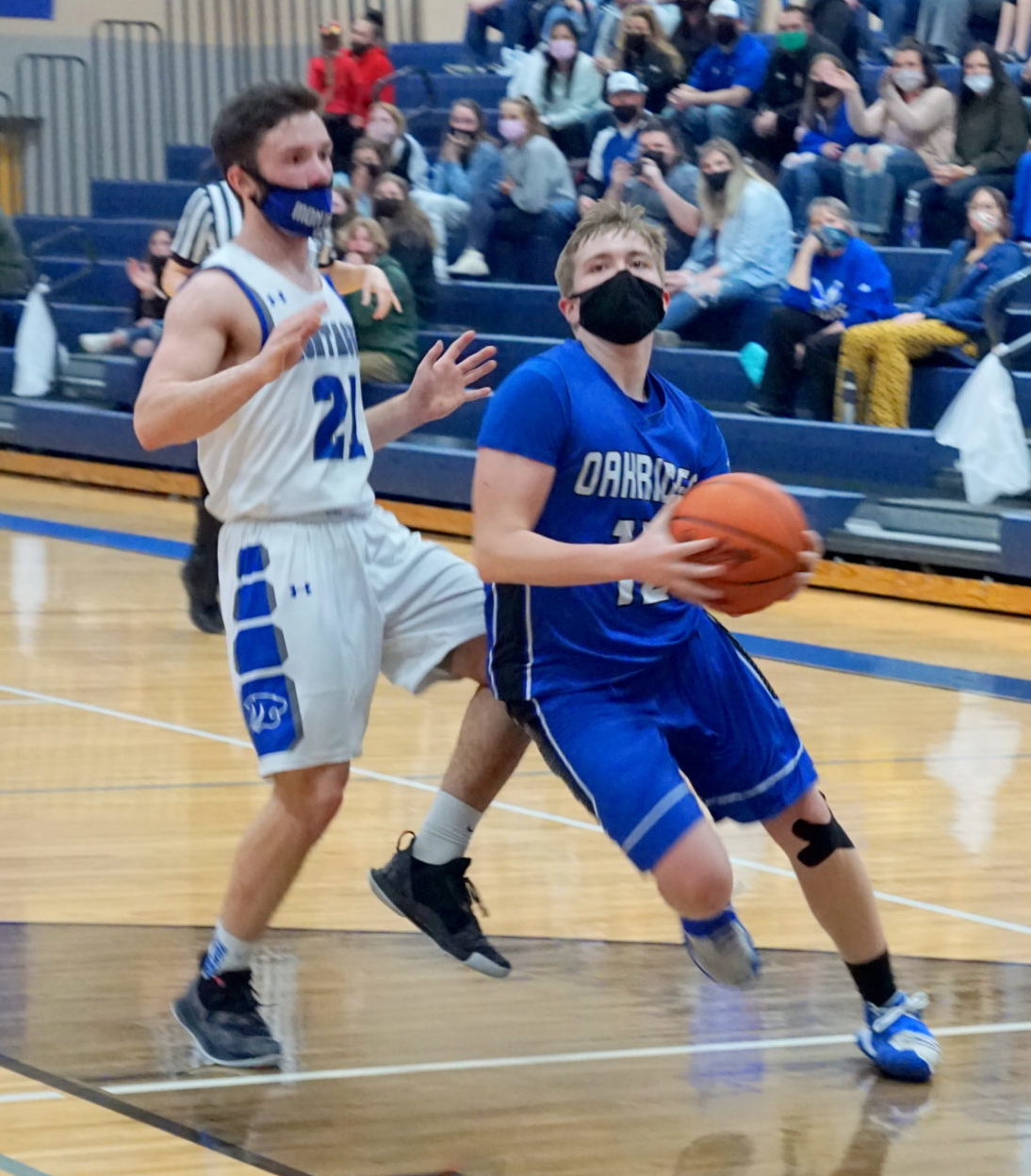 “It’s surreal,” said Nichols about his game-winning shot. “I was very proud to be able to get that shot off. I really wanted that one and we wanted to win this one bad.”

The Wildcats were paced by Collins with 18 points and eight rebounds, while Nichols added 15 points. Rodney Brassfield pulled down eight rebounds.

Oakridge was led by Weaver with 21 points while Miller added 17.

“It’s been tough,” said Oakridge coach Tracy Ruel. “We had five or six games where we lost by like seven points total. We have a great group of guys who put us in a better position than when they came to the program.”

Ethan Millers dribbles around the perimeter for Oakridge. Photo/Leo Valdez