GRAND HAVEN – The Grand Haven girls basketball team didn’t have the type of regular season it hoped for, with five starters returning from the 2019-20 season.

The Buccaneers finished with a disappointing 3-11 record, playing all of their games within the tough O-K Red conference. 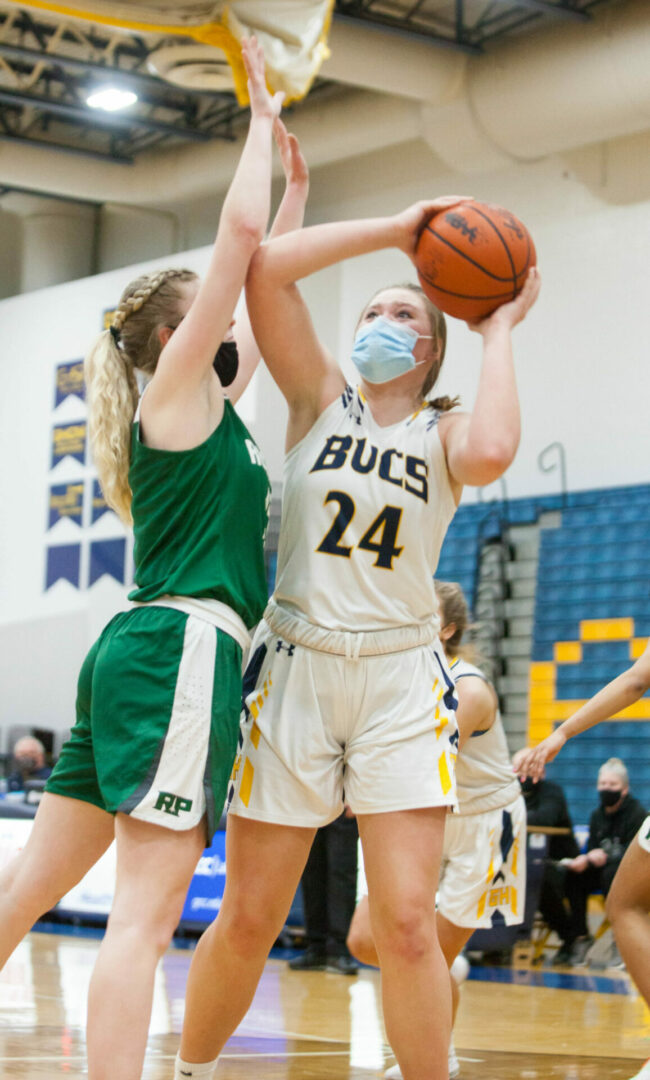 Zoe Spoelman goes up in the paint for Grand Haven. Photo/Jason Goorman

But the regular season is over, everybody gets a fresh start in districts, and the Bucs took full advantage on opening night of the tournament on Monday.

Grand Haven held Reeths-Puffer to seven points in the first half, then withstood a late rally to beat the Rockets 36-29 in a Division 1 district quarterfinal game on its home court.

The Bucs now advance to play Mona Sbores in the district semifinals on Wednesday at 7 p.m. Reeths-Puffer ended the season with a 7-8 record.

By beating R=P, Grand Haven demonstrated that it could turn the tables on a tough team that it lost to earlier in the season, and the Bucs hope to keep that type of  turnaround going for at least a few more games.

“They beat Mona (Shores) on the ninth and they beat Wyoming to cost them the conference title.” Grand Haven Head Coach Katie Kowalczyk-Fulmer about Reeths-Puffer. 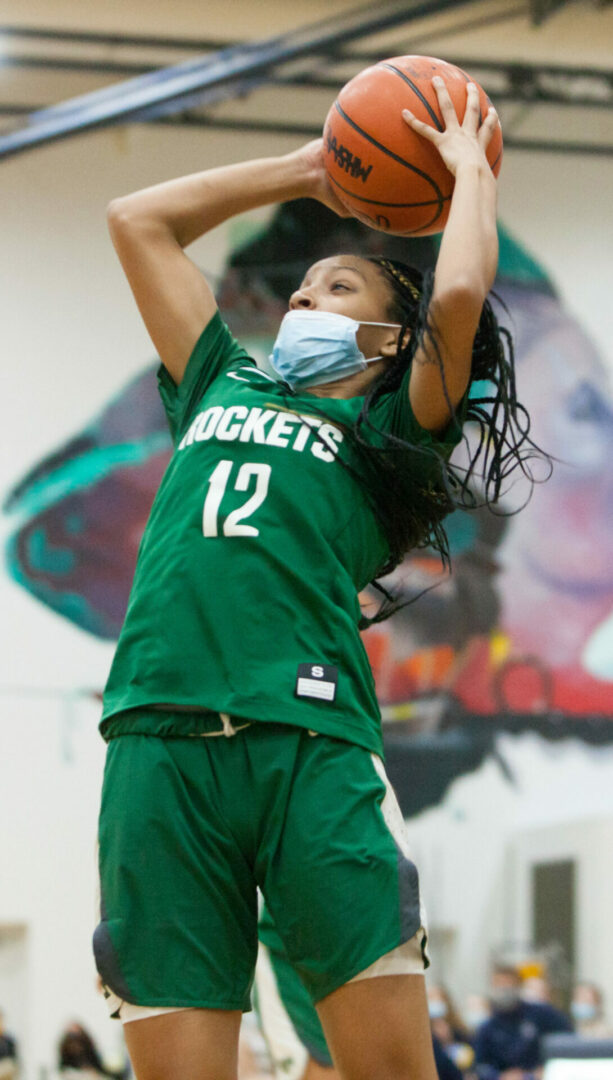 The Bucs played spectacular defense in the first quarter. R-P didn’t score until Sophie Hekkema hit a triple with six seconds left in the quarter, and Grand Haven led 12-3 headed into the second.

In the second quarter, the Rockets used full court pressure to try to change the momentum of the game. R-P was able to cut its deficit to 14-7 with 5:32 left in the half, but Grand Haven adjusted to the press and outscored the Rockets 5-0 the rest of the way to take a 19-7 lead at halftime.

“We play teams like East Kentwood, Rockford, Hudsonville, Jenison, and West Ottawa,” Grand Haven Head Coach Katie Kowalczyk-Fulmer said. “We have been pressured all year, and I think we handled it well enough. Ultimately we survived and advanced.”

The teams traded baskets throughout the third quarter, and the Bucs took a 29-18 lead into the fourth.

The Rockets battled back, cutting the lead to 30-26 with 2:02 left. The turning point of the fourth quarter came with Grand Haven’s Zoe Spoelman at the free throw line. She missed the back half of a 1-and-1, but senior Avery Keefe chased down the offensive rebound.

Alyssa Hatzoe, Spoelman and Molly Long each added one free throw down the stretch to seal the win for Grand Haven.

Kowalcyk-Fulmer had high praise for Keefe’s hustle at a key moment, and her play all night. She finished with 15 rebounds in the game, along with three points and three assists.

“She’s our only senior, and we did not want to say goodbye,” the coach said. “She gave a phenomenal effort and led our team in rebounds and assists.”

Hekkema recorded a game-high 18 points for the Rockets while Arrionna Williams and Ariel Walker each scored four points.

Bella Borgeson drives under the hoop for Reeths-Puffer. Photo/Jason Goorman

Sophia Hekkema gets tied up by Grand Haven’s No. 24 Zoe Spoelman. Photo/Jason Goorman

Reeths-Puffer’s No. 2 Bella Borgeson drives to the bucket against Zoe Spoelman. Photo/Jason Goorman

Zoe Spoelman goes up in the paint for Grand Haven. Photo/Jason Goorman

Alyssa Hatzel moves at the top of the key for Grand Haven. Photo/Jason Goorman

Avery Keefe lines up a shot at the elbow for Grand Haven. Photo/Jason Goorman