The last time the Fremont boys basketball team played Reed City, the Packers won by 27 points, but Friday’s rematch was much closer.

The game came down to the wire, but Fremont managed to overcome a first-half deficit and pull out a 51-48 victory in a CSAA Gold Division matchup.

Fremont had trouble in the third quarter when leading scorer Braiden McDonald picked up his fourth foul, but Joshua Zerfas netted nine straight points to give the Packers a 41-36 lead heading into the fourth.

Fremont’s Lane Converse made one of two free throws with 1.1 seconds on the clock to make the score 51-48, and Reed City’s attempted game-tying three-pointer went wide right.

Zerfas led the way in scoring with 14 points, along with seven assists and six steals. McDonald and Payton Mansfield each added nine points.

KENT CITY 53, WHITE CLOUD 47 – The game was tight throughout, with each team trading baskets en route to a 10-10 tie at the end of the first quarter, and a 21-20 White Cloud advantage at halftime.

Kent City took the lead in the third and carried it to the end of the quarter with a 39-36 edge. White Cloud took the lead back early in the fourth, but a 6-0 run gave the Eagles the advantage for good.

Kyler Larson was the leading scorer for Kent City with 17 points, Cayden Armstrong followed that up with 13 and Hayden Carlson had 11.

LUDINGTON 65, MUSKEGON CATHOLIC 34 – The Orioles took firm control by outscoring the Crusaders 17-2 in the first quarter. They had a 30-13 edge at halftime and a 50-27 advantage after three quarters. 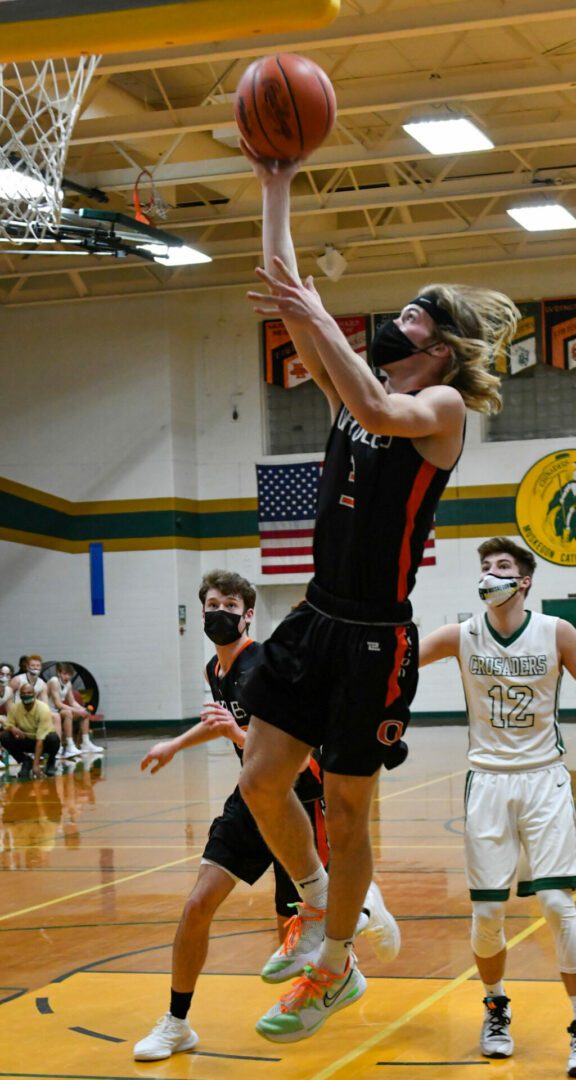 The loss puts Muskegon Catholic at 3-9 overall and 0-6 in the Lakes 8.

SHELBY 52, HART 42 – The game was neck-and-neck in the first half, with Shelby grabbing ea 15-13 lead after the first, before the Pirates came back in the second to take a 26-25 halftime lead.

In the second half, Shelby turned it on defensively while cutting down on the turnovers, outscoring Hart 27-16 en route to the win. 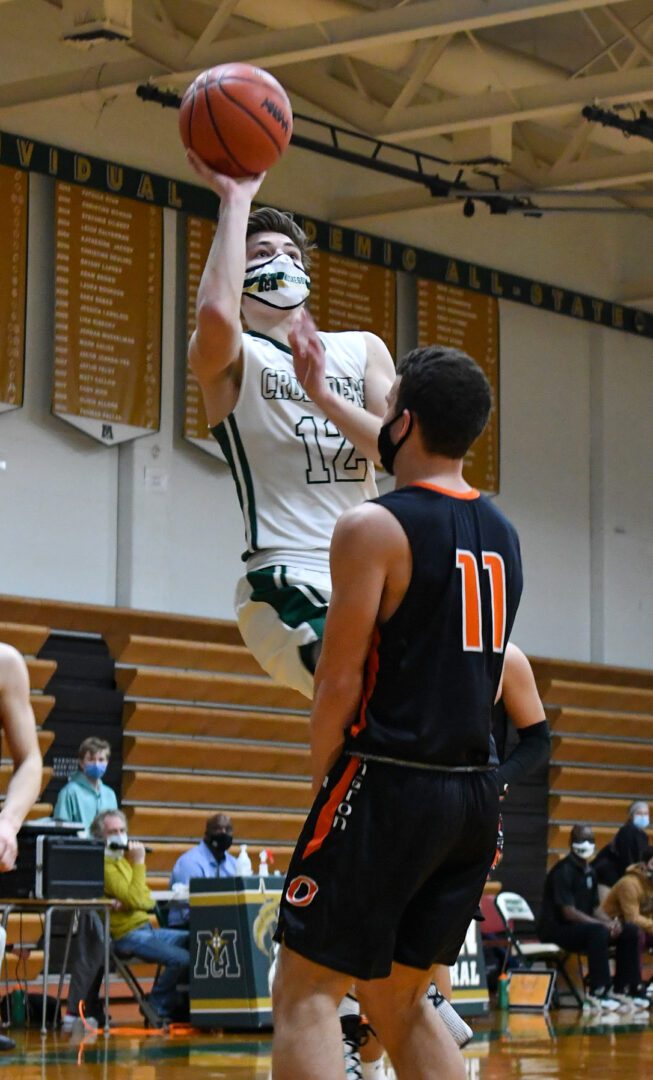 Tommy Kartes goes for a shot over Ludington’s No. 11 Levi Laman. Photo/Michael Banka

FRUITPORT CALVARY CHRISTIAN 89, WEST MICHIGAN LUTHERAN 46 – The Eagles broke their own school record for points, which they set just three weeks ago.

Calvary Christian’s hot scoring started early. The Eagles jumped out to a 25-14 first quarter lead, then shut down their opponents by holding them to three points in the second quarter. Fruitport Calvary led 42-17 at halftime.

Bradley Richards led the scoring with 21 points as well as 10 rebounds. Braden Cohea added 17 points and 11 rebounds, and Braden Swanson had 14 points. Jacob May had eight assists as well as five steals from the point guard position.

The big win puts Calvary Christian above .500 at 7-6 overall, and they are 4-3 in the Alliance League.

Ludington’s No. 21 Mitch Fessler goes up for a shot over No. 23 Aiden Kalisz. Photo/Michael Banka

Ludington’s No. 24 Caleb Smith goes up for a layup. Photo/Michael Banka

Jaden Johnson tries to take a shot in the paint for MCC. Photo/Michael Banka

David Shilling takes a shot from the outside of Ludington. Photo/Michael Banka

Elliot Riegler goes in for a fast break. Photo/Michael Banka

Lucas Carlton tries to go around the Ludington defense in the air. Photo/Michael Banka

Tommy Kartes goes up for a shot along the baseline for MCC. Photo/Michael Banka