The last time Craig Zeerip and sons Justin and Collin were at the state high school team wrestling finals together –  at least as participants  – was way back in 2007.

Craig was an assistant coach of the Hesperia squad at the time, while Justin and Collin were standout wrestlers for the team.

The Panthers lost in the state quarterfinals that year on a tie-breaker, and Justin graduated a few months later. The next year Hesperia won the state championship with Craig as an assistant coach and Collin a sophomore wrestler, but Justin wasn’t part of it. 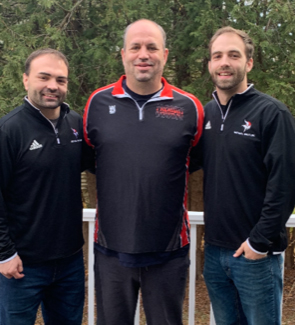 But there is still a chance that the father and two sons could all become state champions together, in their respective coaching roles. Their first opportunity will come on Tuesday at the Michigan High School Athletic Association state team wrestling finals at Wings Events Center in Kalamazoo.

Craig Zeerip is the seventh-year head coach of the Fremont squad, which won a regional title last week and qualified for the Division 2 state quarterfinals.

Justin and Collin Zeerip are in their third year as co-coaches of the Whitehall wrestling team, which also won a regional championship last week and qualified for the Division 3 state quarterfinals.

So all three will be in Kalamazoo with their teams, trying to guide their teams to the top of the mountain. Local teams from Hart (Division 3) and Ravenna (Division 4) also won regional titles last week, and will also compete in their respective tournaments.

Winning at the state level is nothing new for the elder Zeerip.  In his 33 years serving as a head coach or assistant at Hesperia or Fremont, his teams have qualified for the state team final 8 a total of 16 times. Hesperia won the 2008 state title  and was state runner-up four times.

Craig Zeerip took on a new challenge at Fremont seven years ago, rebuilding a team that had fallen on hard times, and Justin and Collin are thrilled to see their dad guide his latest team to elite status.

“He just had a few kids on the team (at Fremont when he started), and he’s done a really good job of building it up,” Justin Zeerip said about his father. “The biggest thing for them is there are not a lot of holes in their lineup. He’s done a great job of developing those guys. I’m really happy for him. I know he’s worked hard at it. 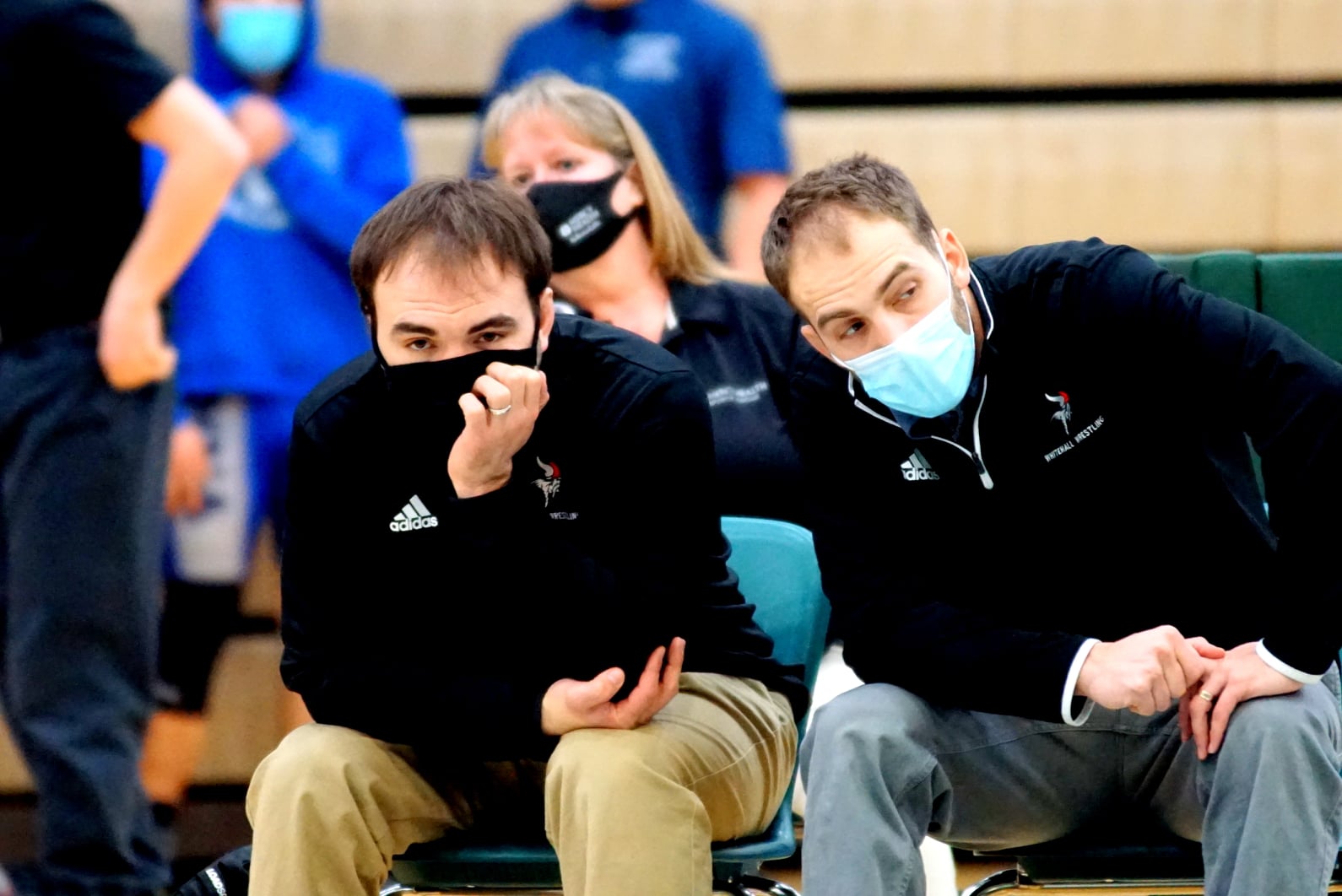 Justin Zeerip, left, sits next to his brother Collin Zeerip during a Whitehall dual earlier this season. Photo/Leo Valdez

“He’s obviously a really good coach. He’s been doing it a long time. He started from scratch over there, and he’s been really motivated.”

Collin Zeerip coached under his dad at Fremont for several years before going to Whitehall with his brother, and he’s pumped to see his dad and a bunch of kids he knows very well make it back to the state quarterfinals for the second straight year.

“I think this is probably pretty rare (having a father and sons coaching teams at state), and it’s super exciting,” he said. “I am super stoked for Fremontl. I got to know the kids there a lot. It’s awesome.”

Meanwhile, Craig Zeerip and his wife Susan are thrilled to see how well their sons have been doing at Whitehall, and are excited about the possibility of  the Vikings going all the way this year.

“They are the second seed in Division 3. They went out and wrestled some great teams this year, and I think they have taken their program to another level. We’re pulling for them.”

At the moment, the only Zeerip with an issue heading into Tuesday is Susan Zeerip. She has always been close to her husband’s team, and keeps the record books for him, but she would obviously like to root her sons’ team on, as well.

Unfortunately all the matches the teams are scheduled to wrestle are at the same time, so she won’t be able to see them both unless one of them loses before the finals. That’s a possibility, of course, but none of the Zeerips want to see it to happen.

“She’s got a Fremont ticket,” Craig Zeerip said about his wife. “With COVID we’re in the one arena and they are in the other. And we’re wrestling at the same times as Whitehall. Both teams will wrestle, and we hope we will both be wrestling again in the afternoon.”

A new challenge for an old coach

Craig Zeerip was a standout wrestler at Fremont High sShool who went on to letter in the sport at Ohio State University.

He came home after college to begin his coaching career. He actually started as an assistant coach at Fremont for a few years, before becoming the head coach at Hesperia in 1990-91, a stint that lasted 13 years. 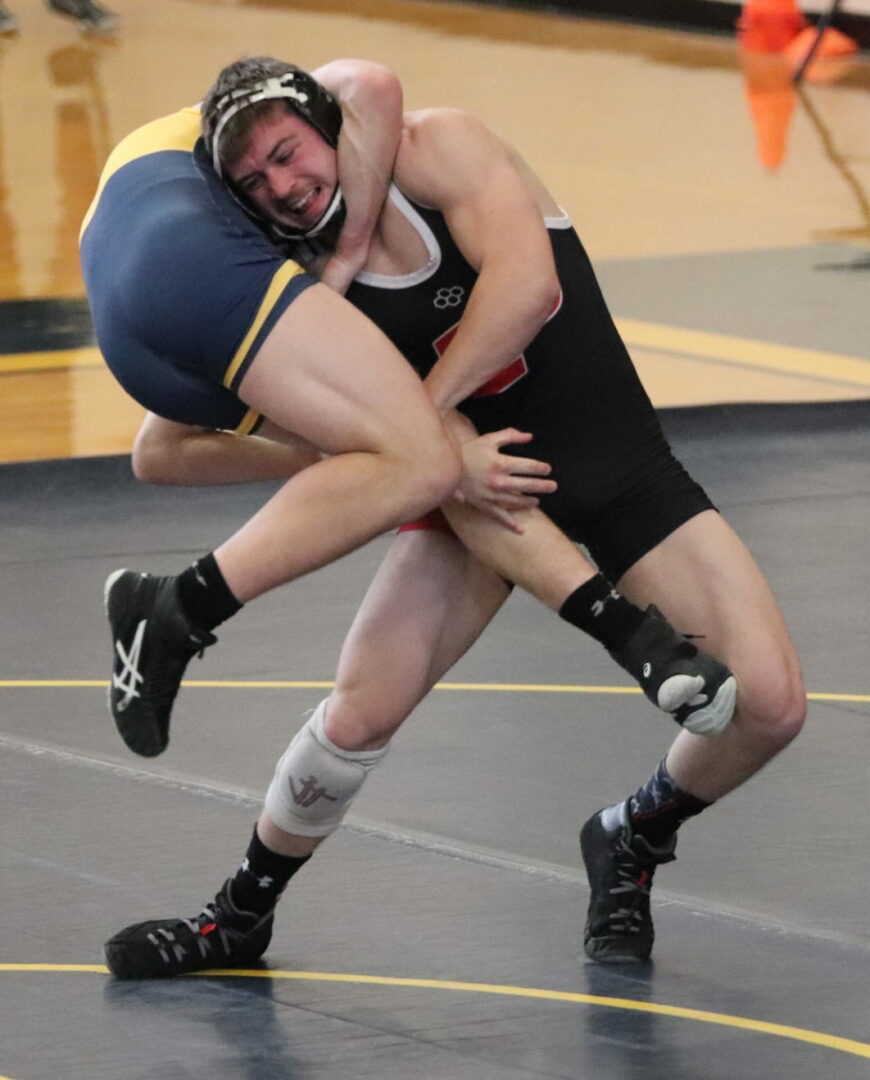 Fremont’s Trey Breuker lifts an opponent during a match.

When his three sons – Justin, Brandon and Collin – started to reach middle school, he took a step back and became an assistant coach at Hesperia, so he could spend more time with them and help them develop their skills.

All three Zeerip boys were also class valedictorians at Hesperia, and went on to wrestle at the University of Michigan.

Craig Zeerip spent 10 years as an assistant coach at Hesperia before he was contacted by Fremont officials about their head coaching vacancy. The Fremont program has suffered over time, and the numbers were low when it came to participation and victories.

It was a new challenge for a seasoned coach, and he decided to take it on, along with one of the other Hesperia assistants, Jeff Thome.

“It felt really comfortable, and it went very smoothly,” Craig Zeerip said about returning to a head coaching position at his old high school. “(Athletic Director) Dave Walls and the administration at Fremont has been outstanding. They are so supportive of our program. They want all of their teams to do well, and that sure helped us in building a program.

The Fremont team has steadily improved under Zeerip’s veteran guidance. In the first year the team finished with a modest 12-10 record, but the last three seasons have been outstanding, with the team  going 31-9 in 2019, 24-9 in 2020 and 26-2 so far this season. 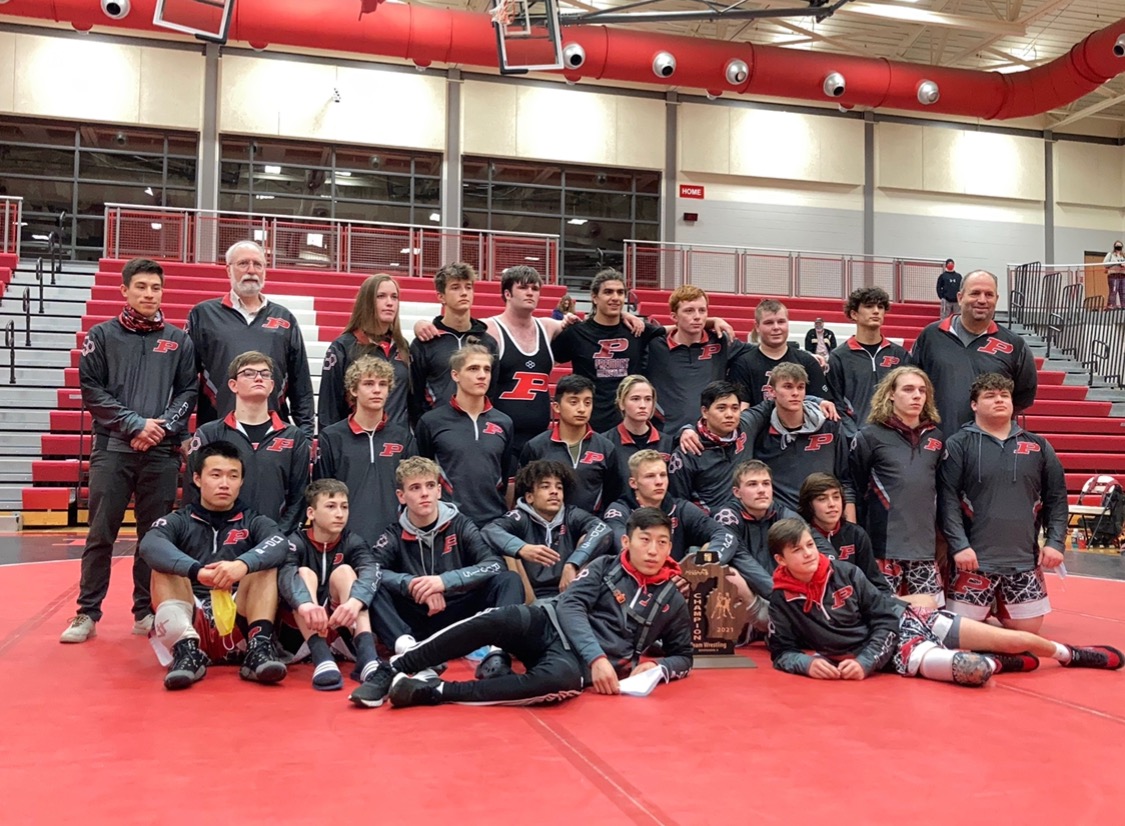 Fremont team poses with its trophy after capturing a regional title last week.

The Packers steamrolled through team districts this year, beating Ludington 78-6 and Mount Pleasant 62-10. In regionals they defeated Bay City John Glenn 46-30 and Escanaba 48-29 to gain their berth in the final eight.

Fremont will wrestle Monroe-Jefferson on Tuesday at 12:30 in the Division 2 quarterfinals. The winner will advance to the 3 p.m. semifinals, against the winner of the Lowell-Charlotte match. The Division 2 finals will be at 6 p.m.

Craig Zeerip believes last year’s experience, with the Packers making the state team quarterfinals for the first time before losing to Alma, was extremely valuable, and is paying big dividends this year.

“Last year was kind of new territory for Fremont,” he said. “The whole process was new for us and it blazed a path for us. Wednesday night (at team regionals) was the best we’ve wrestled all year, and we’re hoping that carries over until Tuesday. I believe it will. We have a close-knit group that works hard and competes hard.”

Collin Zeerip was an assistant coach under his dad at Fremont, and Justin was coaching middle school wrestling at Hesperia, when a very old dream suddenly became possible.

As far back as high school, Collin and Justin had talking about someday coaching a team together, and the opportunity arose when longtime Whitehall varsity wrestling coach Cliff Sandee retired following the 2017-18 season. 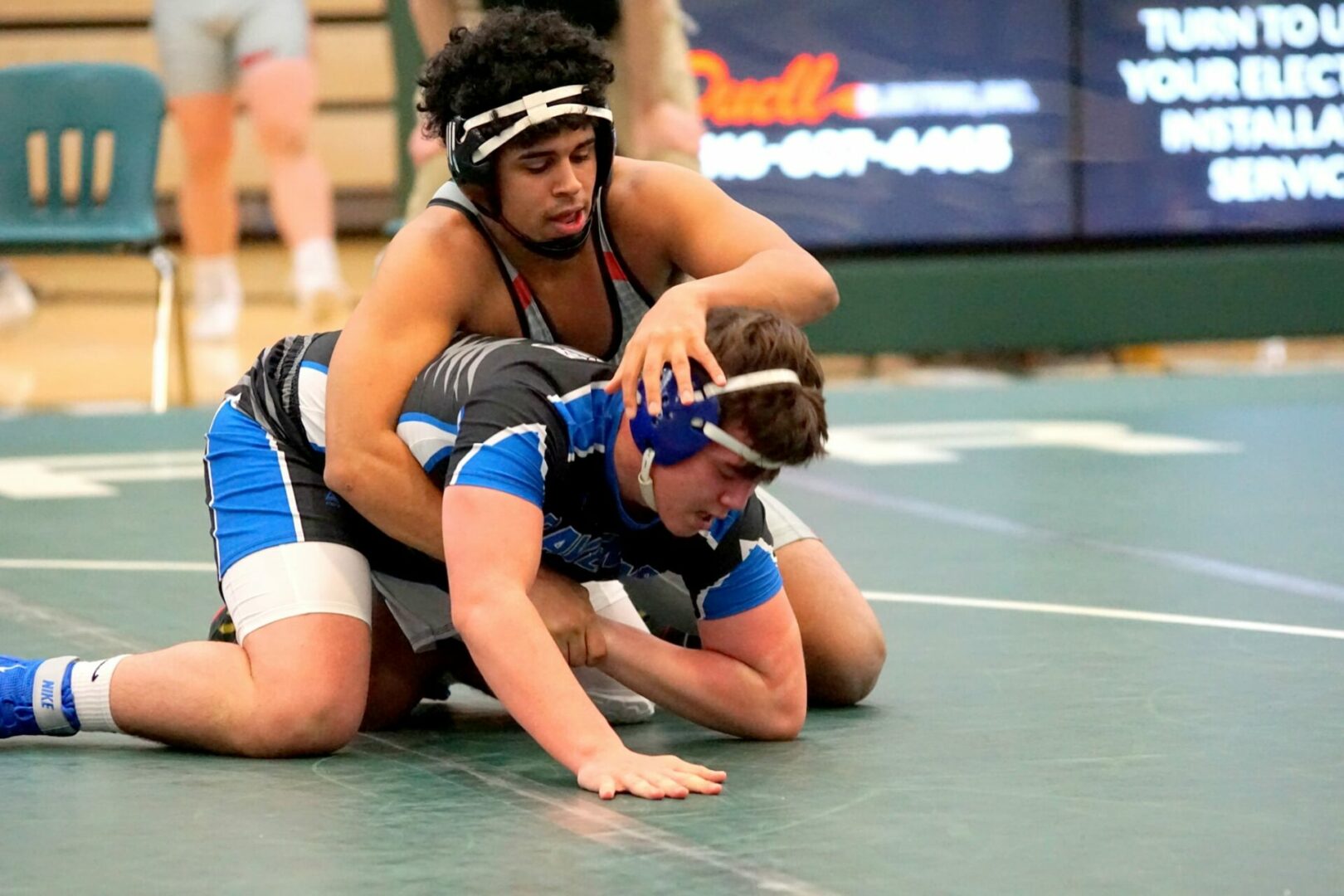 Whitehall school officials reached out to the Zeerip brothers, and they decided to take over the program as equal co-coaches.

“We’re really close, and we always dreamed of coaching together,” Justin Zeerip said. “It’s been really, really fun these last few years. It’s been a blast. It’s definitely fulfilled all of my expectations.

“At the time I was coaching middle school at Hesperia, Collin coaching with dad at Fremont, and they contacted us wondering if we were ready to take the next step. It was late summer at the time, we were doing a family vacation, and we decided it was a good opportunity, even if it was a bit of a drive.”

Collin Zeerip agrees with that assessment.

“It was something we always talked about, something that was in the back of our minds, and it’s been awesome living out that goal and dream.”

Of course the history of sports is littered with disaster stories of teams that tried to have co-coaches, without one person in charge. If often doesn’t work well without a single coach responsible for making final decisions. But Justin Zeerip said he and his brother functions in their roles just fine.

“It’s working really well,” he said. “We try to share roles and switch stuff up. We try to have a good working relationship on everything, and a good line of communication. We are four years apart in age, but have always had similar trains of thought. We discuss things and make decisions together, then put up a united from and try not to second-guess ourselves.” 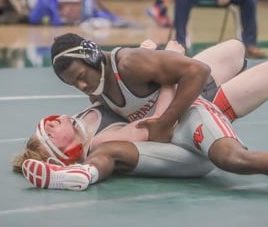 The Zeerip brothers were fortunate to take over an extremely good program. Whitehall had been the dominant wrestling program among Muskegon County schools for more than a decade, winning 13 straight Greater Muskegon Athletic Association City Wrestling Tournament titles, and advancing far into the state team tournament numerous times.

The Zeerips have maintained the program’s tradition very well so far. In their first season, 2018-19, the Vikings advanced all the way to the Division 3 state semifinals before losing to traditional state power Dundee 35-27.

“It really came down to the last match, which is what team state duals usually come down to,” Collin Zeerip said. “Every point counts.”

Last season the Vikings took a bit of a step back, finishing second to Reeths-Puffer at the GMAA City Tournament and ending their long title streak, and losing again to R-P in a tough Division 2 team district match.

Whitehall heads into the final eight seeded second in Division 3, behind only Dundee, a team the Vikings would meet in the state championship match if they advance that far on Tuesday.

“This is a great group,” Collin Zeerip said. “I think what sets this team apart is the chemistry. No matter who is out on the mat wrestling, the whole team is behind them and behind each other. Team morale is super high, and you don’t always see that.”

Both Justin and Collin Zeerip say they learned a great deal from their dad over the years, and have applied those lessons at Whitehall.

“A ton,” Colllin said, when asked that question. “I think the biggest things I learned from him were to have a good system in place, and to be able to communicate with kids and set high expectations for them, on and off the mat.”