Big Red boys fall to Zeeland East 59-52, Muskegon coach says he was pushed by referee during a fourth-quarter discussion

Muskegon trailed by three points and had the ball with 25 seconds left when the Big Reds were whistled for a moving screen offensive foul, giving the ball to the Chix. 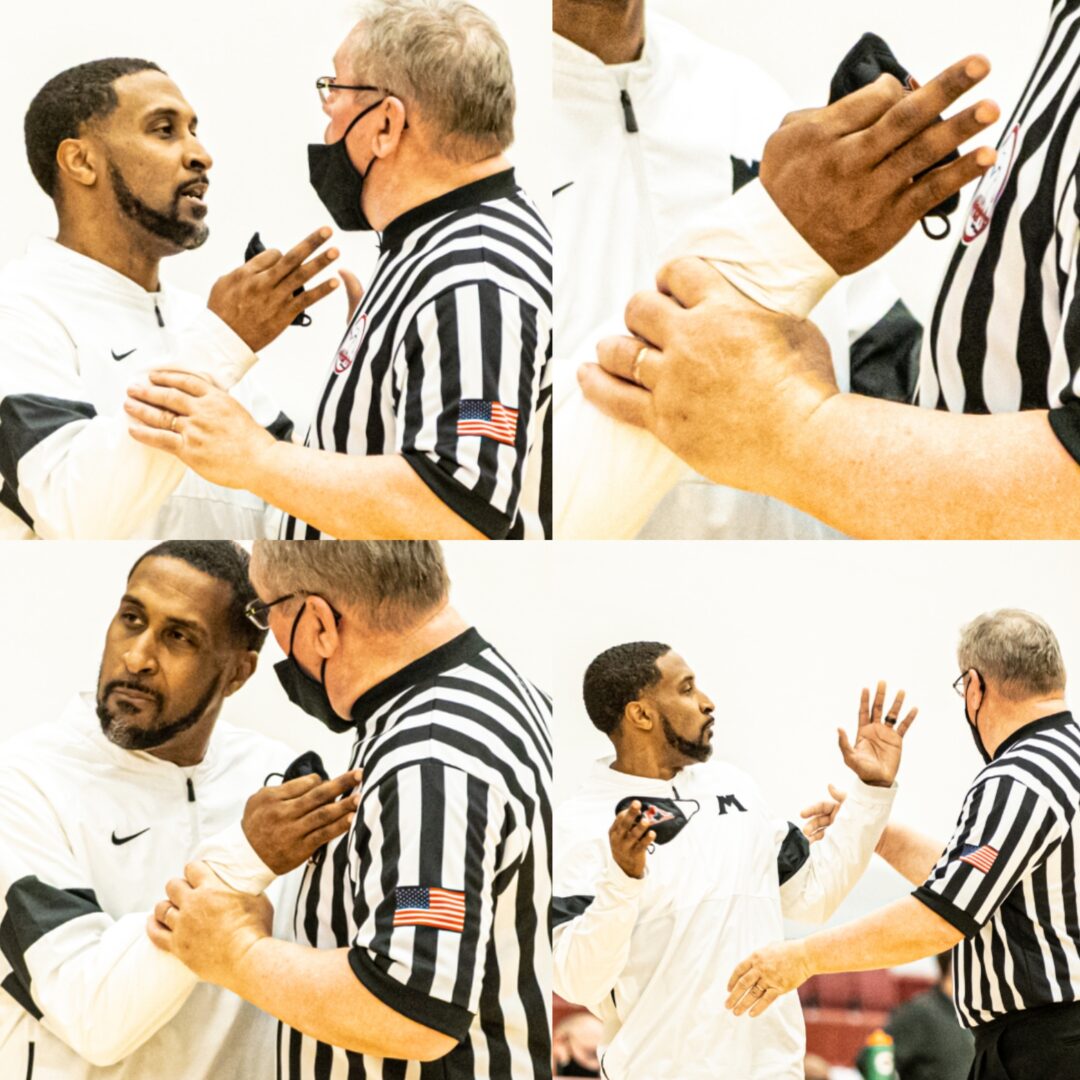 Muskegon Coach Keith Guy gets grabbed and pushed by a referee late in the Big Reds’ loss to Zeeland East. Photos/Tim Reilly

Zeeland East called a time out after the foul call. During the time out, Muskegon coach Keith Guy and a referee came together for a discussion. While they were talking, Guy claims the referee pushed him. LSJ photos of the incident indicate that the referee made physical contact with Guy.

After the exchange, Guy was called for a technical foul, giving Zeeland East two free throws and the ball. The Chix hit four free throws down the stretch to nail down the 59-52 victory.

Zeeland East, which had already clinched the O-K Green championship, improved to 16-0 overall and 14-0 in league play. The Big Reds finished the regular season 12-6 overall and 11-3 in the conference.

A police officer on the scene told Guy after the game that he would review any photos and video captured by people in attendance to determine whether criminal charges could be pursued. 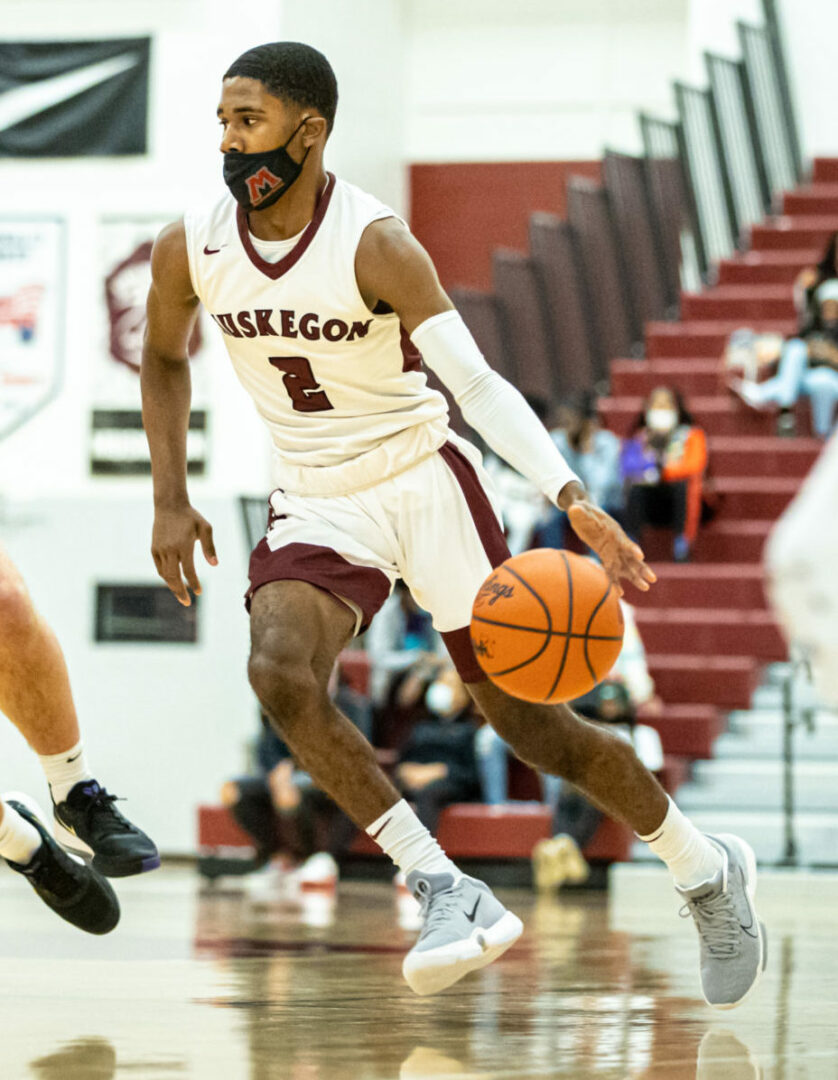 Jordan Briggs drives toward the hoop for Muskegon. Photo/Tim Reilly

“He pushed me,” Guy told reporters after the game. “I couldn’t get away with that. I don’t teach my team to do that. There was no reason for him to put his hands on me and push me. Just because you’re the official don’t mean you have the right to lay your hands on a grown man, or anybody.

“I’m upset right now. I’m sorry for my kids. I’m sorry they had to see that.”

The game was a battle throughout, but Guy said the tight contest was marred by the late incident.

“This took away from the game,” he said. “It’s just blatant, it’s out of control, there’s no excuse for it. Something needs to be done. I’m not saying all officials are bad, I’m just saying tonight, that was inexcusable. 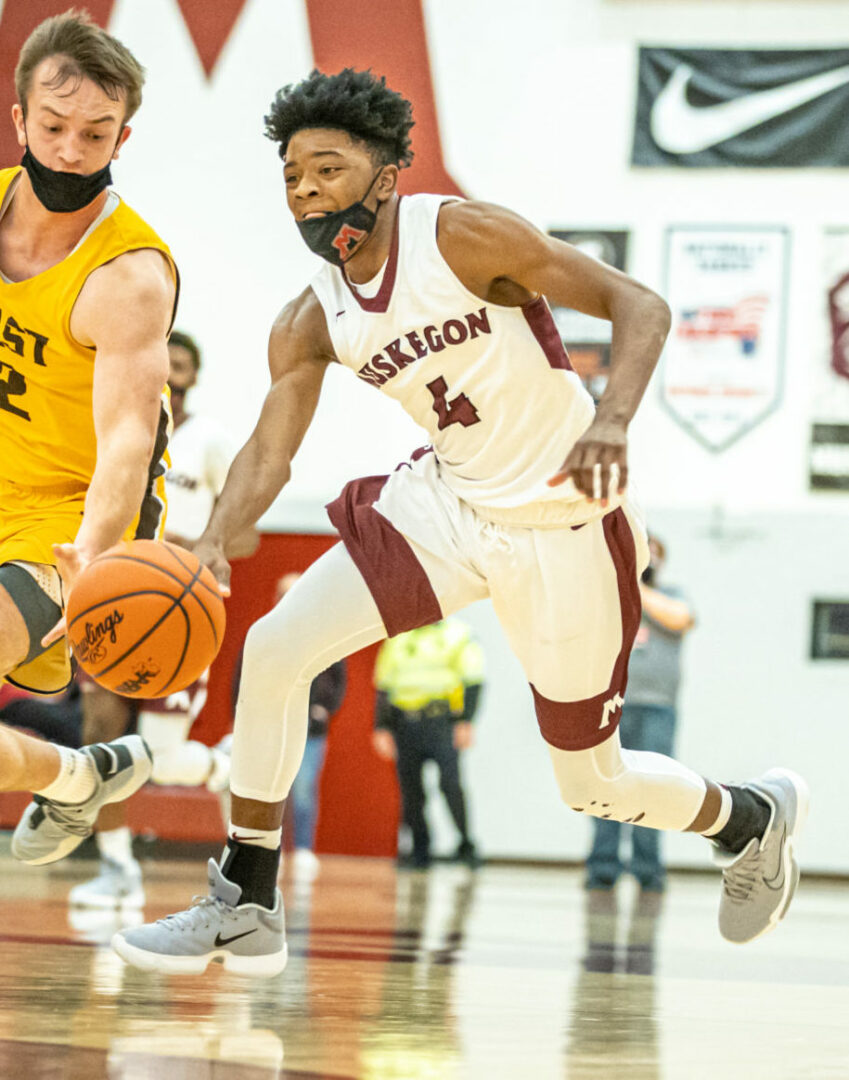 “I’m frustrated because we shouldn’t have to go through what we go through right now, in 2021. Our kids fight and then I’m always looked at as the bad guy. I’m just tired of it.”

The Big Reds lost three of their last four regular season games, but Guy said he was proud of how his players battled  on Friday night.

“I’m proud of my guys, they fought,” he said. “They did what they had to do. They fought to the last second. I’m just proud of them. We just wanted to get better, win or lose, and I thought we did that.”

Muskegon got off to a good start, grabbing a 10-7 lead at the end of the first quarter and 25-23 advantage at halftime.

The third quarter was a disaster for Muskegon. Zeeland East big man Nate Claerbaut dominated the quarter with 10 points after not scoring in the first half. The Chix outscored Muskegon 25-12 to turn a halftime deficit into a 48-37 lead.

The Big Reds battled back throughout the fourth quarter, clawing within 54-52 with 1:30 to play. Zeeland East hit one free throw to go up 55-52 with 37.7 left before the alleged push, technical foul and decisive free throws.

Riemersma led the Chix with 23 points and Claerbaut finished with 14.