MUSKEGON – Is there anything that Whitehall’s Karli VanDuinen doesn’t do well?

“Swimming,” the junior multi-sport athlete said, when asked that question on Wednesday.

That may be the case, but we know that she’s very good in at least two sports.

In the fall, VanDuinen won her second Greater Muskegon Athletic Association Girls Golf Tournament individual championship, so her name has become synonymous with that sport.

But on Wednesday we found out that she’s really good at bowling, as well, when she picked up her first individual girls championship at the GMAA Bowling Tournament at Northway Lanes in Muskegon.

In fact, she considers bowling her favorite sport, and spends the majority of her sports recreation time working on her game. That showed against top local competition when she bowled games of 199 and 223 for a 422 series to win the girls individual crown. 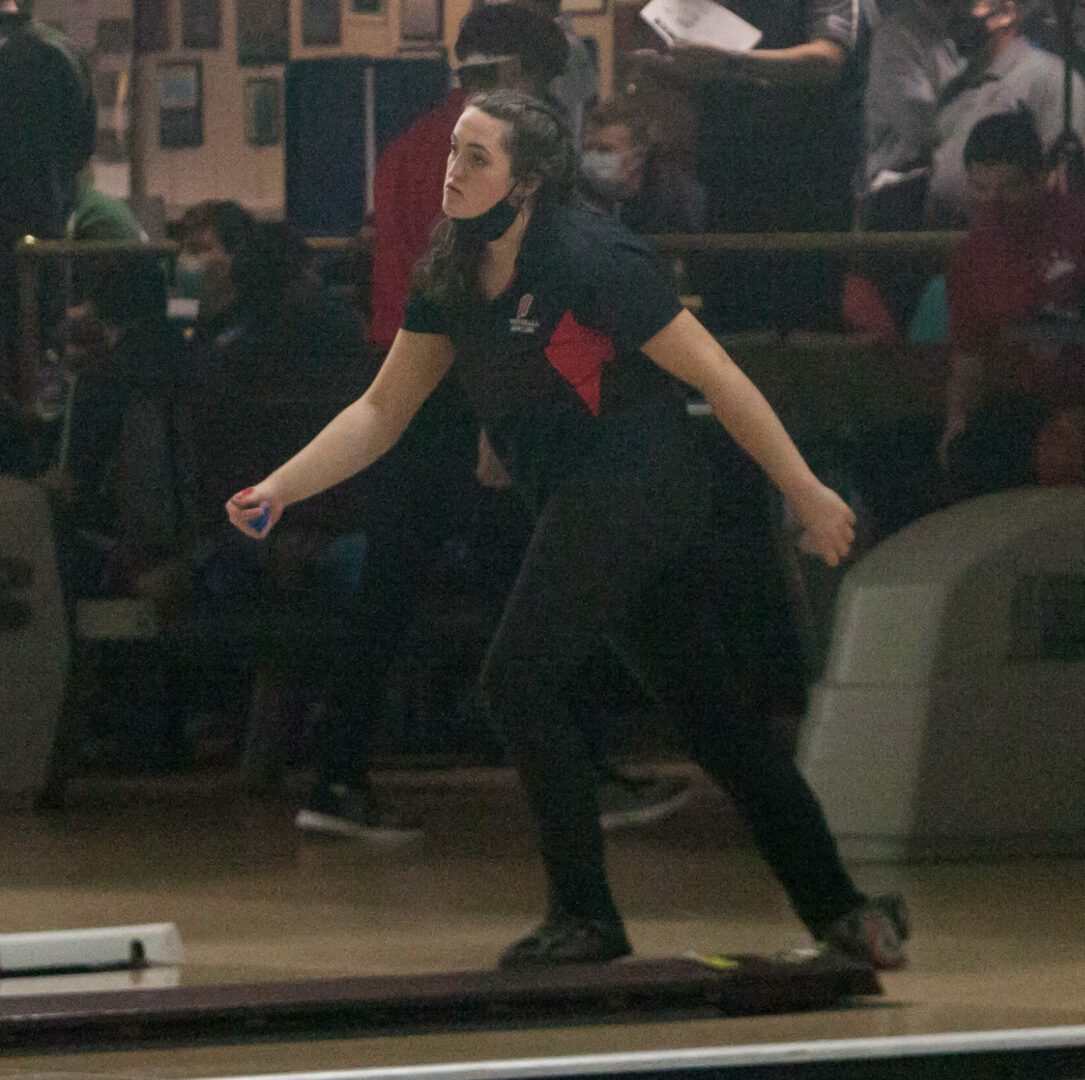 “I bowl all year,” said VanDuinen, a soft-spoken girl who doesn’t waste many words.

When asked if it meant more to win a GMAA title in golf or bowling, she said, “They are equally fun. Each has its challenges. Golf is a little more long.”

After winning the individual title, VanDuinen went back to work, helping her teammates capture the girls title in the team portion of the event, beating Fruitport in the semifinals, then downing defending champion Ravenna in the finals, 322-268.

The GMAA title was the first for the Whitehall girls bowling team, which is only three years old. The other members of the championship squad are Kenedy Woodring, Jayden Sheehy, Molly Karchinsky, Katie Ferris and Ava Garcia.

“I don’t know that I expected it, but there’s potential here,” he said. “We still haven’t reached it, but we’re getting there and slowly getting better. We made spares today when we needed to, when before we wouldn’t. That was the different today.”

The boys competition was similar, with the top individual bowler also leading his squad to the team championship.

The individual champion was senior Cameron Weaver of Fruitport, who won the event for the second straight year. He rolled games of 179 and 185 for a 364 series, edging Whitehall’s Charlie Glamzi, who finished with a 358 series.

The other bowlers in the individual top 10 were Kyle Weaver of Oakridge, Dylan Gordon of Ravenna, Sebastian Workman of Whitehall, Evan Simonis of Fruitport, Marshall Kiester of Ravenna, Ryan Michael of Western Michigan Christian, Xzavier Fondren of Muskegon and Chris Swarts of Oakridge. 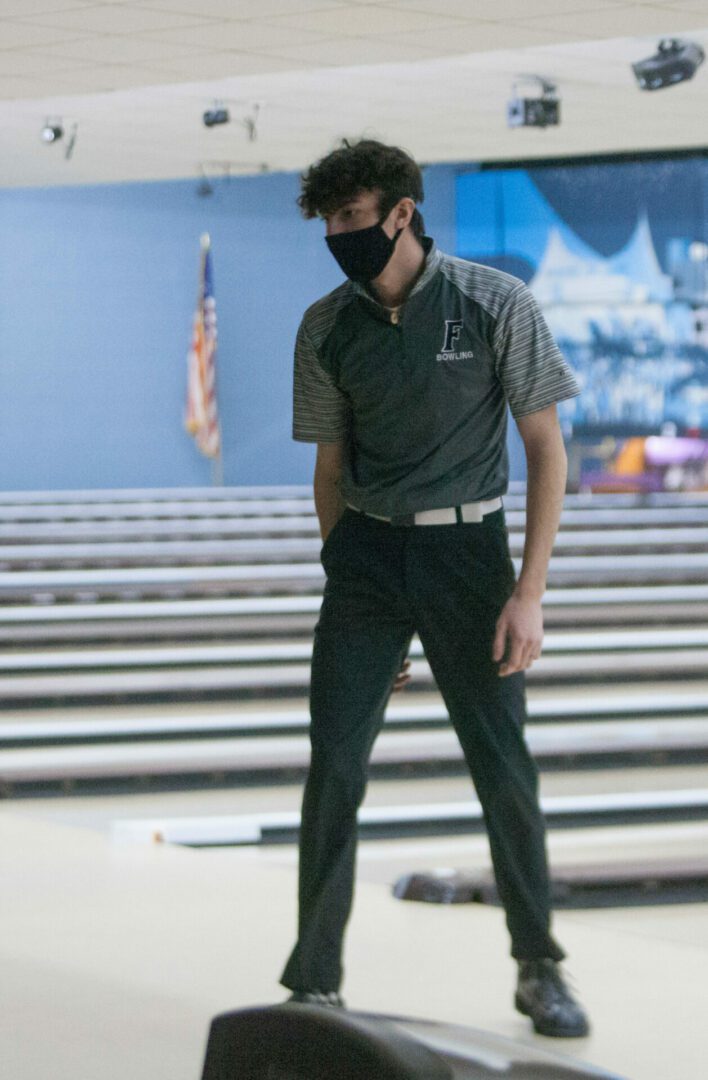 Of course Weaver is known on the lanes for his skill, but he also gets his share of attention for his two-handed toss. While more and more high school bowlers are now using two hands to roll the ball, Weaver’s approach is even more unique. He tends to glance to his right during his windup, and never seems to focus on the pins, or any point on the lane.

It may not be the most technically correct toss, but it certainly works for Weaver.

“I used to bowl one-handed, then I started doing that my freshman year cause I thought it looked cool,” Weaver said. “It’s just comfortable for my, I guess. I just enjoy doing it.

“I don’t look at anything when I bowl, I just throw. I just look up for a second, then wherever my head goes it goes. A lot of people say I should look at a marker, like one of the arrows, but I just look wherever.”

After winning the individual title, Weaver helped his Fruitport squad win its second straight team championship by defeating Ravenna in the semifinals, then Orchard View in the title match 333-291.

The other members of the title team are JRay Conklin, Mason Murphy, Jordan Hennings, Evan Simonis and Braydon Krohn.

Weaver came through at a key moment for his team, which lost the first of two games to Ravenna in the semifinals by 12 points, and had to rally in the second to beat the Bulldogs. The match came down to Weaver’s final roll, with one pin standing. He picked up the spare to give the Trojans a 13-point win in Game 2 and a one-point win in the match.

Fruitport boys coach Nick Osinski said he never doubted that Weaver would pick up the crucial spare in the tense moment.

“He’s the best on the team, he’s the champion two years in a row, and I never doubt him when he has the ball in his hand,” the coach said.

Osinski said his team is “one of the more talented group of guys I’ve seen in terms of high school bowling. When they get going they can roll.”

When asked how far his team could go this season, Osinksi did not hesitate to point to a team state championship.

“I firmly believe that,” he said. “I’ve seen a lot of other teams bowl, and there are not a lot I’ve seen that quite stack up with us top to bottom. But we’re still going to have to perform.”