MUSKEGON – When a high school team has only four seniors and no returning starters from the year before, there are plenty of question marks.

But it only takes one productive senior to get the rest of the roster in gear, and the Muskegon boys basketball team had one on Tuesday night in a key game against a local rival. 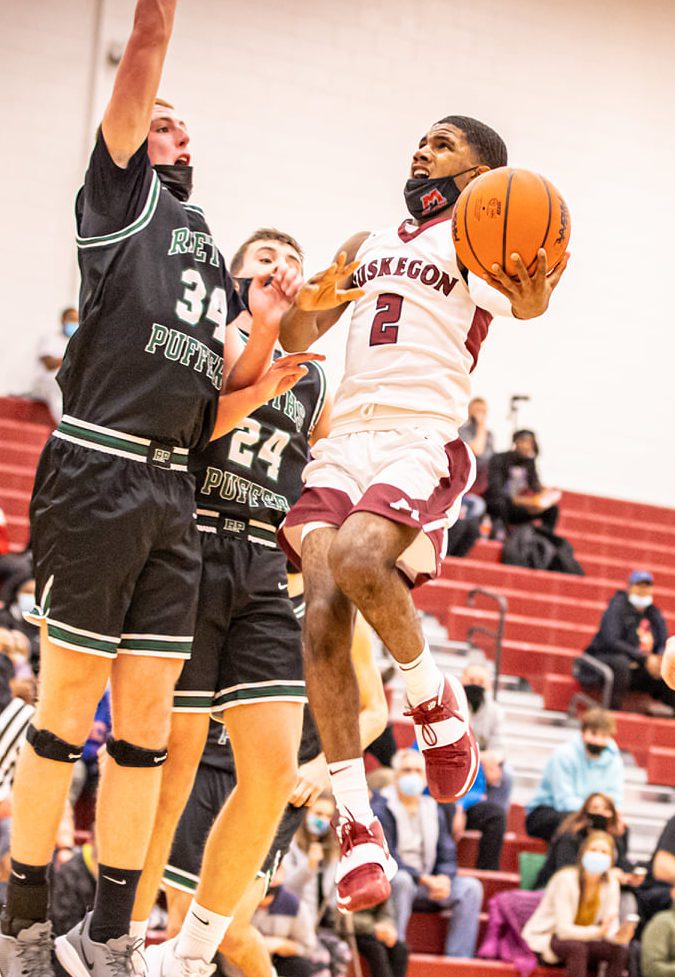 Jordan Briggs shifts through the air for two around Reeths-Puffer’s No. 34 Kendall Smith. Photo/Tim Reilly

The Big Reds improved to 5-2 overall on the season and 3-0 in the conference, giving a clear signal that a young team doesn’t necessarily have to be a bad team.

“Having some varsity experience helps us,” said Muskegon Coach Guy, when asked about Stimage’s performance. “He’s done an unbelievable job leading the team. He’s confident and in the right places. He’s a gym rat and he’s leading the young guys.”

“I was very confident,” said Stimage, who sank 6 of his 12 shots from the floor and also pulled down five rebounds. “My teammates found me in the right spots and my shot was just falling tonight.”

The really good news for Muskegon fans is that Tuesday’s result was just a sampling of a still unfinished product. The young squad is still gaining valuable experience and learning to play together, and should only get better in the weeks to come. 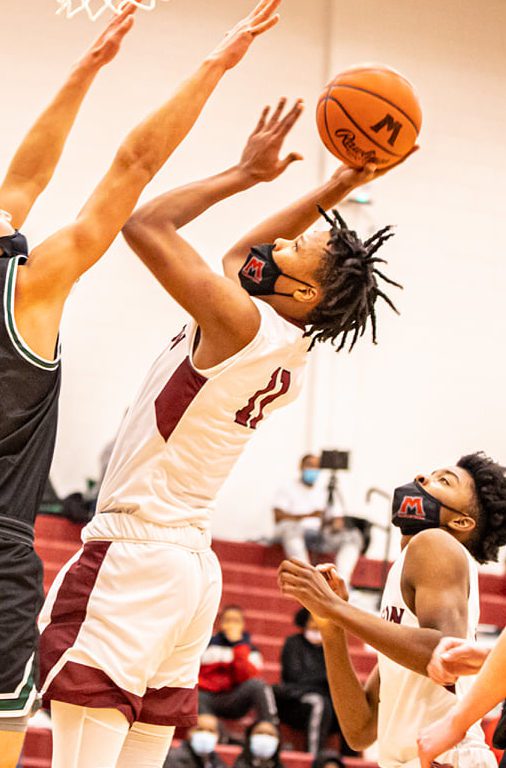 Ethan Hill leans back to get a bucket over Reeths-Puffer. Photo/Tim Reilly

“We’re starting to get it,” Guy said. “We’re going to have peaks and valleys. We understand that. We’re a young team with limited practice time. We’re playing more games than we have had practices. I’m not complaining, because it beats the alternative.”

The Big Reds were dominant from the start, jumping out to a 21-8 lead by the end of the first quarter. Stimage led Muskegon with nine points in the opening quarter while Kendall Smith paced the Rockets with six.

After halftime, the Big Red defense took its turn displaying its capabilities, holding Reeths-Puffer to just eight points in the third quarter – a pair of triples by Mitchelson and a two-point basket from Travis Ambrose.

That allowed Muskegon to jump out to a 57-33 lead headed into the fourth quarter. Stimage had eight points in the third.

Reeths-Puffer had an 11-8 edge in the fourth quarter, but was unable to overcome the large deficit.

Mitchelson finished with 18 points to lead the Rockets while Smith added 15 points and 11 rebounds. Logan Brooks also had 11 boards for Reeths-Puffer, which finished the night shooting just 34 percent from the field.

The Rockets are now 4-3 overall and 3-3 in the conference.