EGELSTON TOWNSHIP – A good basketball team has both a post presence and outside shooters who can take advantage of space.

On Tuesday night, the Oakridge boys basketball team displayed both in a 62-47 victory over rival Ravenna in a season-opening West Michigan Conference contest. 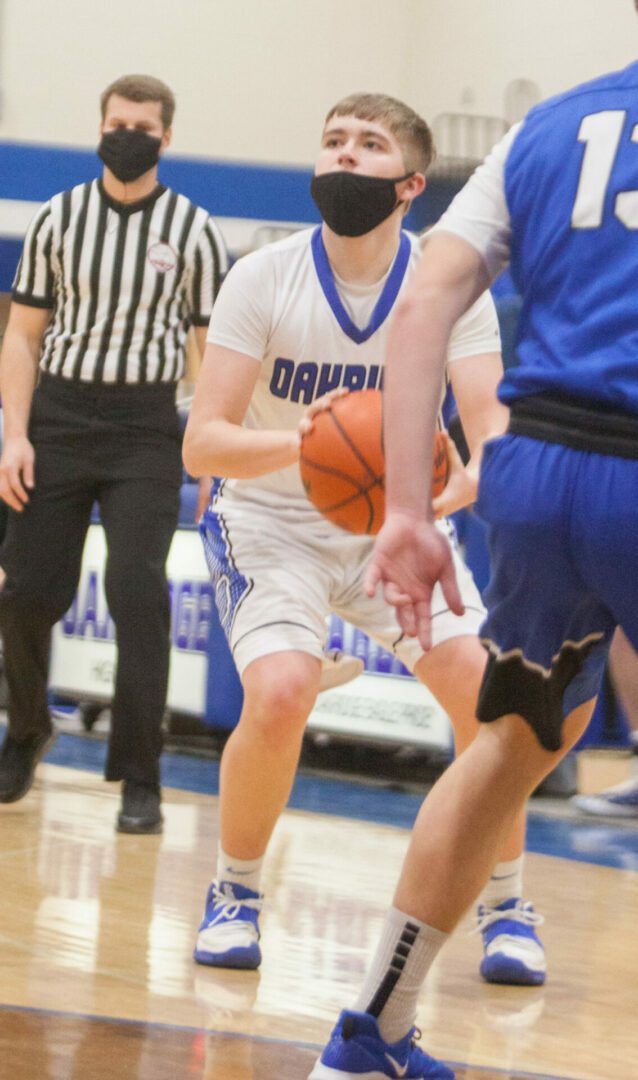 Garrett Wever gets ready to sink one of his seven 3-pointers for Oakridge. Photo/Jason Goorman

From the first quarter, Oakridge established a post presence with senior Luke Martin totaling five points and junior Ethan Jozsa adding four. The success of the inside game allowed junior guard Garrett Wever to knock down a pair of 3-pointers.

The three key players kept it up the entire game and made the difference for the Eagles.

Wever finished with 23 points on the night, including seven three-pointers, while Jozsa added 17 points and Martin totaled 11.

“It’ll be our goal most of the season,” said Oakridge head coach Tracy Ruel about how his team stuck to establishing the post to open the game up. “We’ll want to work the ball in the post and when they start doubling, we have shooters so we can kick it out.”

Despite the early success of the Oakridge offense, the Eagles only led 15-13 after one quarter due to a balanced scoring attack from Ravenna. Senior Joel Emery and junior Travis May each had four points in the opening eight minutes for the Bulldogs.

But in the second quarter, Jozsa once again was dominant, scoring seven more points as Oakridge extended its lead to 31-21 at halftime.

“It felt really good,” said Jozsa about taking over the post in the second quarter and scoring 11 first-half points. “It was just nice to be able to play again and it felt normal. It let us get some points on the board and play more comfortable.”

In the third quarter, Wever took advantage of the Bulldogs doubling of the post, knocking down three 3-point shots and totaling 11 points.

“It felt good from the first shot,” Wever said. “My team kept getting me open, so I just kept shooting. I get a lot more open shots because teams have to double down on our post.”

Junior Kyle Beebe kept Ravenna in the game, however, totaling 10 third quarter points of his own and keeping Ravenna within striking distance at 48-38.

But over the final eight minutes, Oakridge used a balanced scoring attack to outscore Ravenna 14-9 and ultimately cruise to victory.

Ravenna was led by Beebe with 13 points and May with 11 on the night.

Both teams will be back in action on Thursday night when Oakridge hosts Mason County Central and Ravenna hosts North Muskegon.

Ravenna’s No. 13 Travis May drives past Oakridge’s No. 33 Ethan Miller. Photo/Jason Goorman

Joel Emery slashes through the lane and scores over Oakridge’s No. 11 Ethan Jozsa. Photo/Jason Goorman

Ravenna’s No. 5 Kyle Beebe blocks the shot of No. 11 Ethan Jozsa. Photo/Jason Goorman

Bryson Foster goes up for a shot in the lane for Oakridge. Photo/Jason Goorman

Garrett Wever gets ready to sink one of his seven 3-pointers for Oakridge. Photo/Jason Goorman

Luke Martin gets ready to go up for a shot in the lane against Ravenna’s No. 14 Steven Cook. Photo/Jason Goorman