MUSKEGON – Despite their best effort, it just wasn’t a night for the Muskegon Lumberjacks to get the upper hand.

The Jacks hosted the Green Bay Gamblers in the first of a three-game weekend home series on Thursday, and they spent the evening catching up.

After a scoreless overtime period, the game went to a shootout, with three players from each team going one-on-one with the opposing goalie. Only one of the six players scored – Green Bay’s Mason Lohrei – and the Jacks fell 4-3 at Mercy Health Arena.

The loss ended one good streak, because the Lumberjacks had won both of their two previous meetings with Green Bay. Muskegon is now 16-9-1-2 on the season, good for second place in the USHL’s Eastern Conference standings with 35 points. The Gamblers are in third with a 14-7-0-2 record, five points behind the Jacks, but they have played five fewer games. 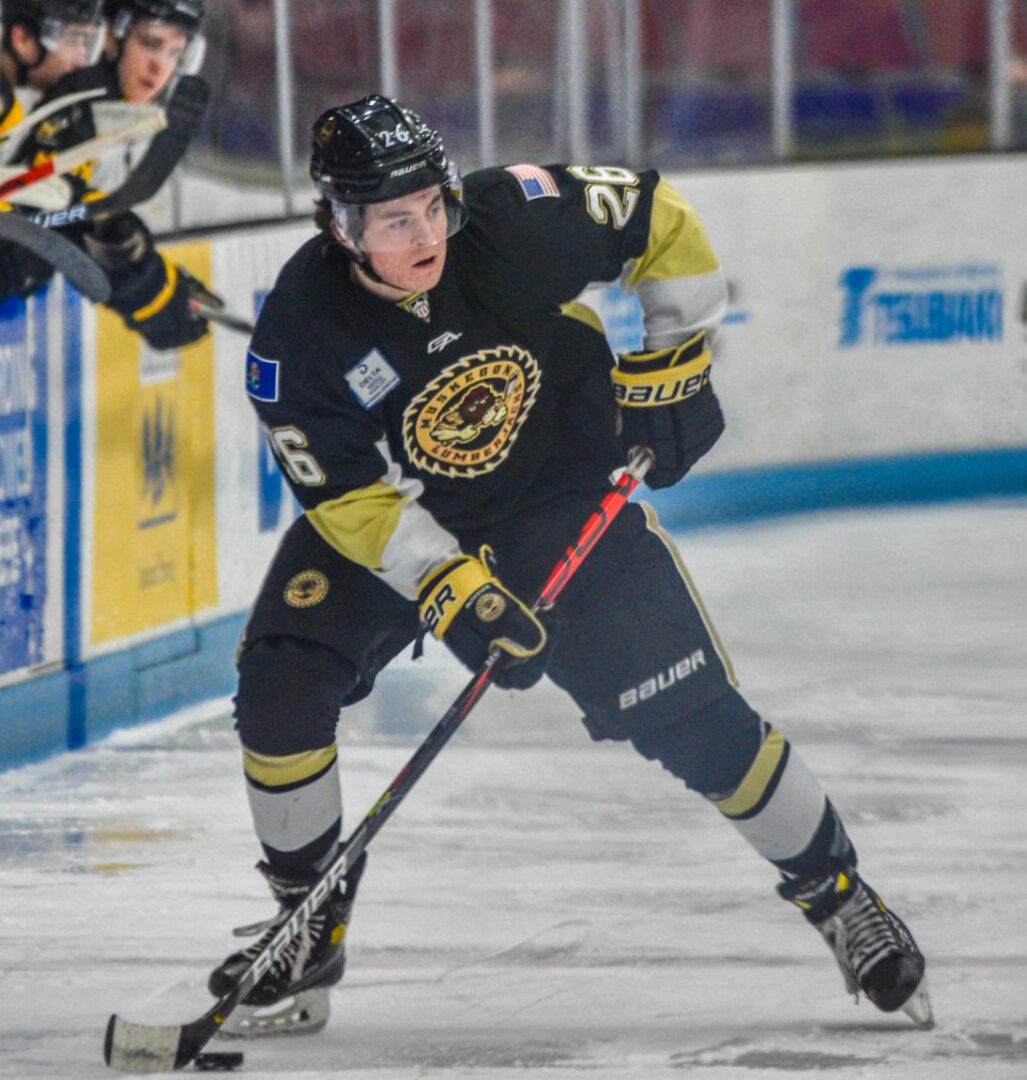 Tanner Kelly controls the puck near the benches for Muskegon. MSD Photography|Mitchel Dixon

The teams will go at it again in Muskegon on Friday and Saturday nights, with puck drop at 7 p.m. both evenings.

The loss also extended a bad streak for Muskegon. The Lumberjacks have now lost three games in a row, their longest skid of the season. Two of those losses have come on home ice, including last Friday against Team USA, when the Jacks gave up four unanswered goals in the third period.

Thursday’s game was not a regular loss in the standings. It was a shootout loss, and the Jacks still received one point in the standings, as opposed to two for Green Bay. But it felt like the real thing to the Lumberjacks, who worked hard all night and outshot the Gamblers 43-31.

“We had our chances and carried a lot of the play,” said Lumberjacks Coach Mike Hamilton. “We had lots of opportunities to get a lead and just couldn’t figure out how to put it in. Every period we came out a little slow, and then got going. We just have to learn to play a full 60 minutes and capitalize on our opportunities.”

Despite the lack of wins lately, Hamilton said it’s hardly time to push the panic button. 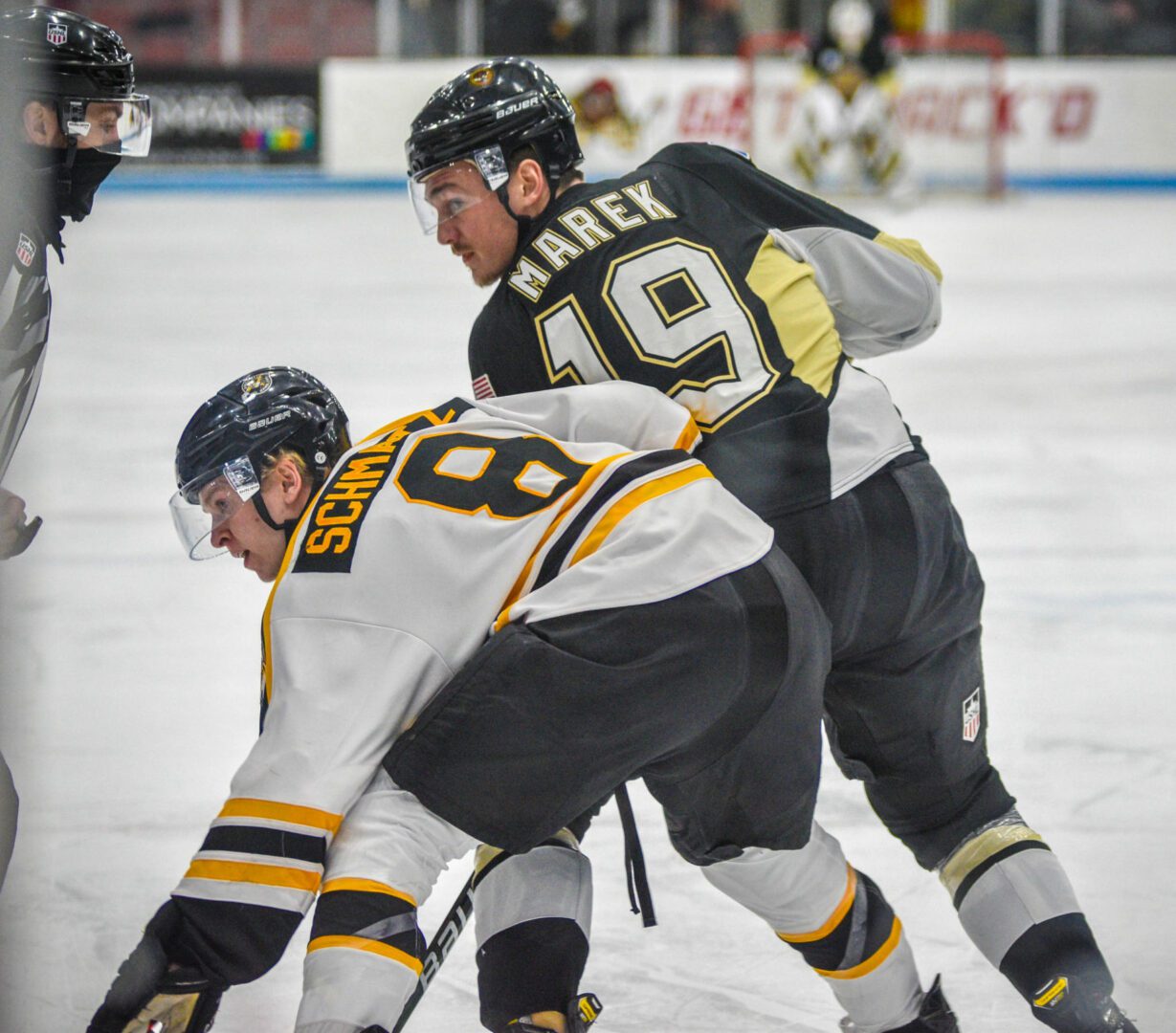 “At the end of the day, we played a pretty good hockey game,” he said. “We were one shot away from winning.”

Green Bay took its first lead at 4:40 of the first period with a goal by Jackson Kunz.

The Lumberjacks appeared to score the tying goal when John Druskins did some nice stick work and put the puck in the net at the 5:25 mark, but the goal was disallowed due to goalie interference.

Muskegon made up for it about six minutes later when forward Brad Marek knocked in a loose puck on a rebound following a blocked shot, and the score was tied 1-1 at the end of the first period.

Green Bay pulled ahead 2-1 at 4:35 of the second period when Lohrie, who would later score the winner in the shootout, let a high shot fly from the corner of the rink at a difficult angle, and it somehow found its way past Muskegon goalie Jan Skorpik. 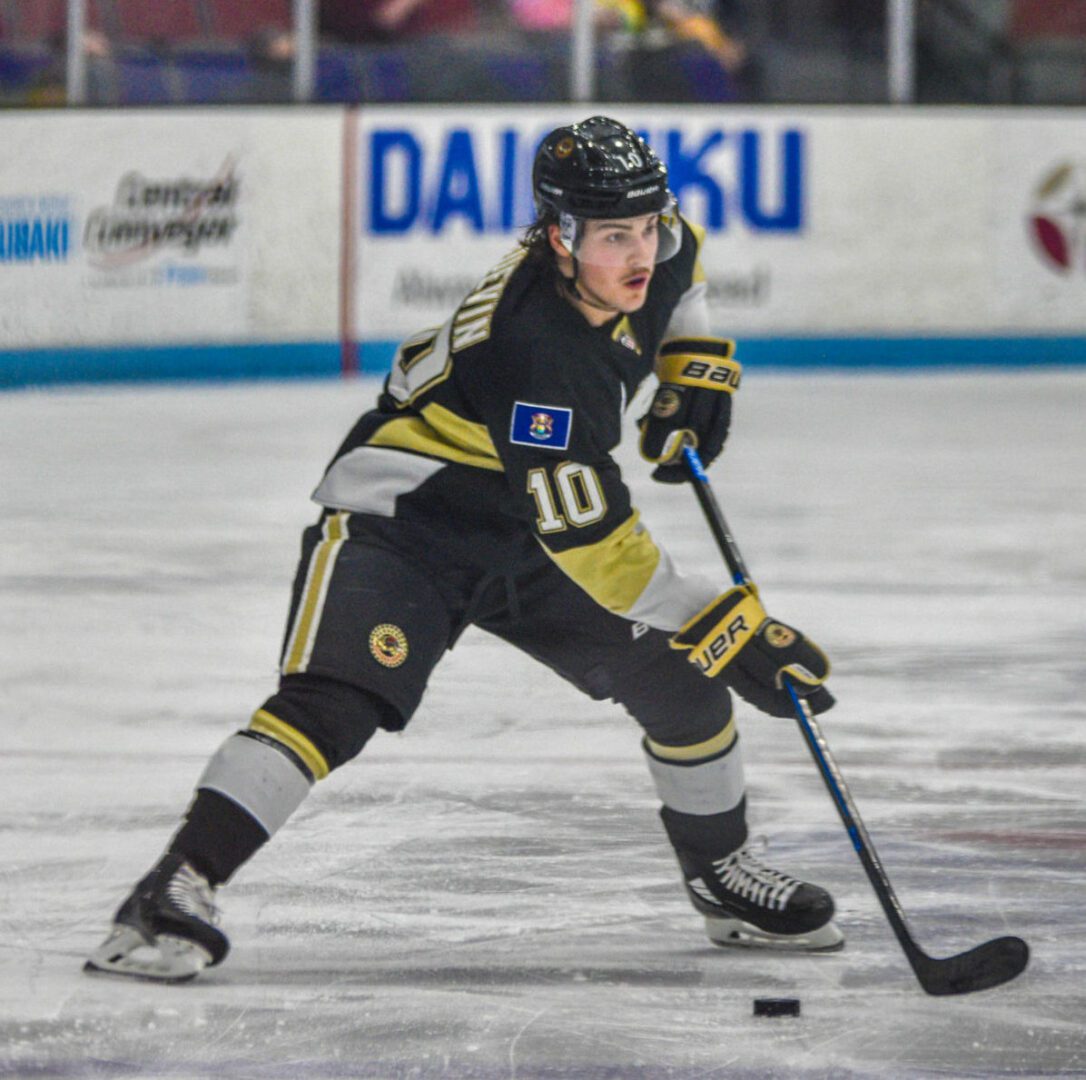 The Jacks tied things up again at the 7:58 mark when David Hymovitch popped a rebound past Green Bay goalie Aaron Randazzo.

The Lumberjacks outshot Green Bay 4-2 in overtime, but failed to find the net. They had their best chance to win the game when Lohrei was called for a two minute boarding penalty, giving Muskegon a 4-on-3 skater advantage for the final 1:14, but couldn’t capitalize.

“I thought their goalie was good tonight, and we didn’t put it away,” Hamilton said. “Some of our best players need to be our best players, and tonight we just didn’t get it done.”

Lohrei was the only one of six players to score in the shootout, and that settled the issue.

Davis Pennington and Tanner Kelly each had two assists for the Lumberjacks.

Muskegon’s Bradley Marek goes for the puck while teammate No. 26 Tanner Kelly follows along the boards. MSD Photography|Mitchel Dixon

Tanner Kelly controls the puck near the benches for Muskegon. MSD Photography|Mitchel Dixon

Tyler Dunbar gets ready to take a shot for Muskegon. MSD Photography|Mitchel Dixon