Lumberjacks suffer their first shutout loss in more than a year, and lose their fourth straight, in a 4-0 loss to Green Bay

MUSKEGON – It’s not often that you see a shutout in a USHL game, particularly when the team that was blanked usually scores a lot.

But the Muskegon Lumberjacks, who have the league’s most goals with 126, were shut down on Friday night 4-0 against Green Bay at Mercy Health Arena.

It was the first time Muskegon has been shut down offensively in more than a year, when the Madison Capitols blanked the Lumberjacks 3-0 back on February 7, 2020.

The Lumberjacks winless streak is now at a season-high four games. They are currently 16-10-3 on the season, good for 35 points and second place in the Eastern Conference. Muskegon is seven points behind first place Chicago and just three points ahead of third place Green Bay.

The Lumberjacks will look to salvage one of the three-game series against Green Bay when they host the Gamblers again on Saturday at 7:10 p.m.

“We had a lack of effort tonight,” said Lumberjacks coach Mike Hamilton. “We didn’t compete early, and we just sat around and let them take it to us. Attention to detail wasn’t there, it was just a disappointing effort. 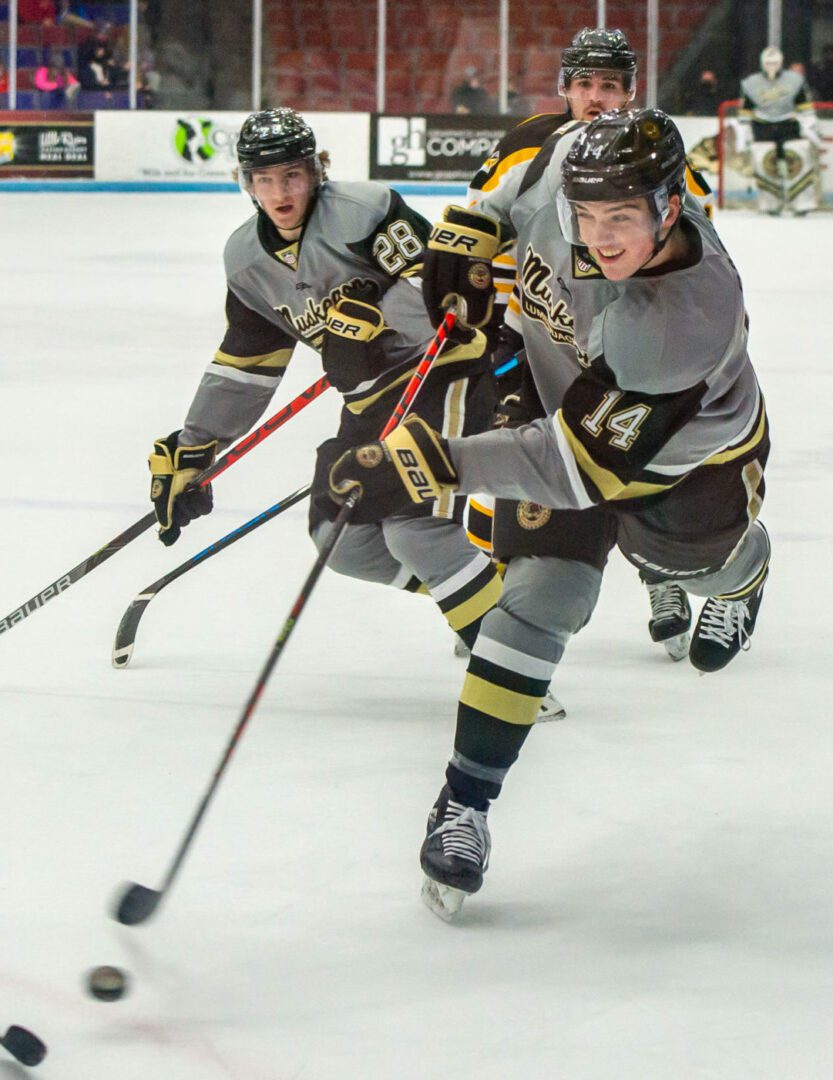 Alex Gagne rips a shot for Muskegon with No. 28 Quinn Hutson behind. Photo/Kristine Tyler

“We weren’t good tonight at all. In the other losses during the streak we were better statistically, but tonight we were dominated.”

The first period was scoreless, with Green Bay having a 12-7 advantage in shots.

The Lumberjacks opened the second period with a big opportunity when they had a four-minute power play, following a high stick call on Green Bay’s Victor Mancini. But they failed to convert on that power play, or on a two-minute one-man advantage later in the period.

It looked like the Lumberjacks were finally going to end the scoring drought with 8:30 remaining in the second period, but Tanner Kelley’s open back hand shot rang off the crossbar.

Muskegon’s Cameron Berg also had an opportunity with a breakaway chance with around seven minutes left in the second period, but Gamblers goaltender Matt Davis stopped the puck and kept the Jacks off the board.

The Gamblers finally broke the scoreless tie at the 14:57 mark of the second period on a power play goal by Camden Thiesing.

Green Bay added a pair of late second period goals on a breakaway tally by Matt DeBoer with 29 seconds left, and a goal by Jackson Kunz with five seconds remaining. The Gamblers led 3-0 headed into the third.

“The chances we had could have sparked us if we converted,” Hamilton said. “But at the end of the day you can’t let your guard down for a minute to end a period.”

The Gamblers closed out the scoring with the lone goal of the third period on DeBoer’s second tally at the 17:37 mark. 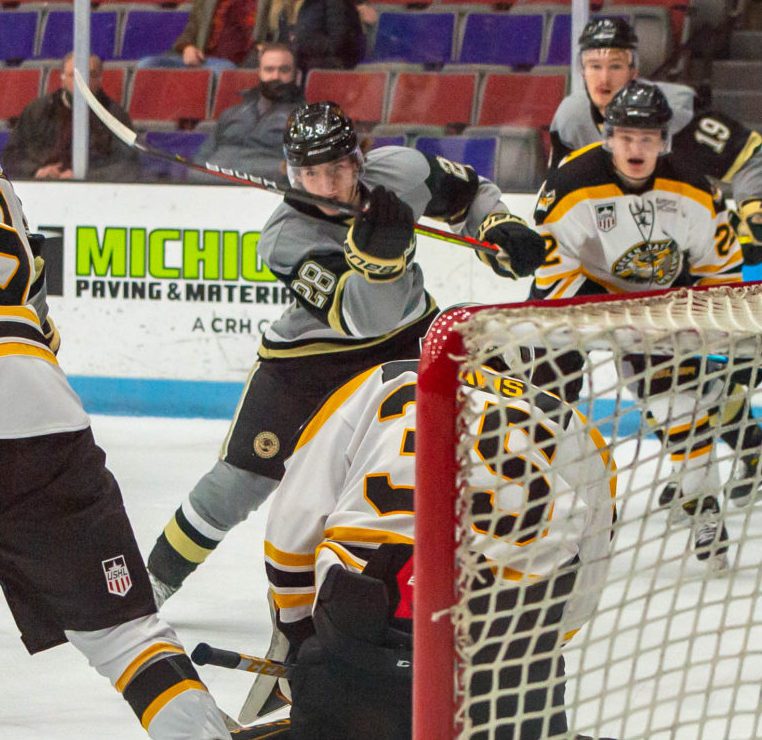 Quinn Hutson gets in close with a shot on goal for Muskegon. Photo/Kristine Tyler 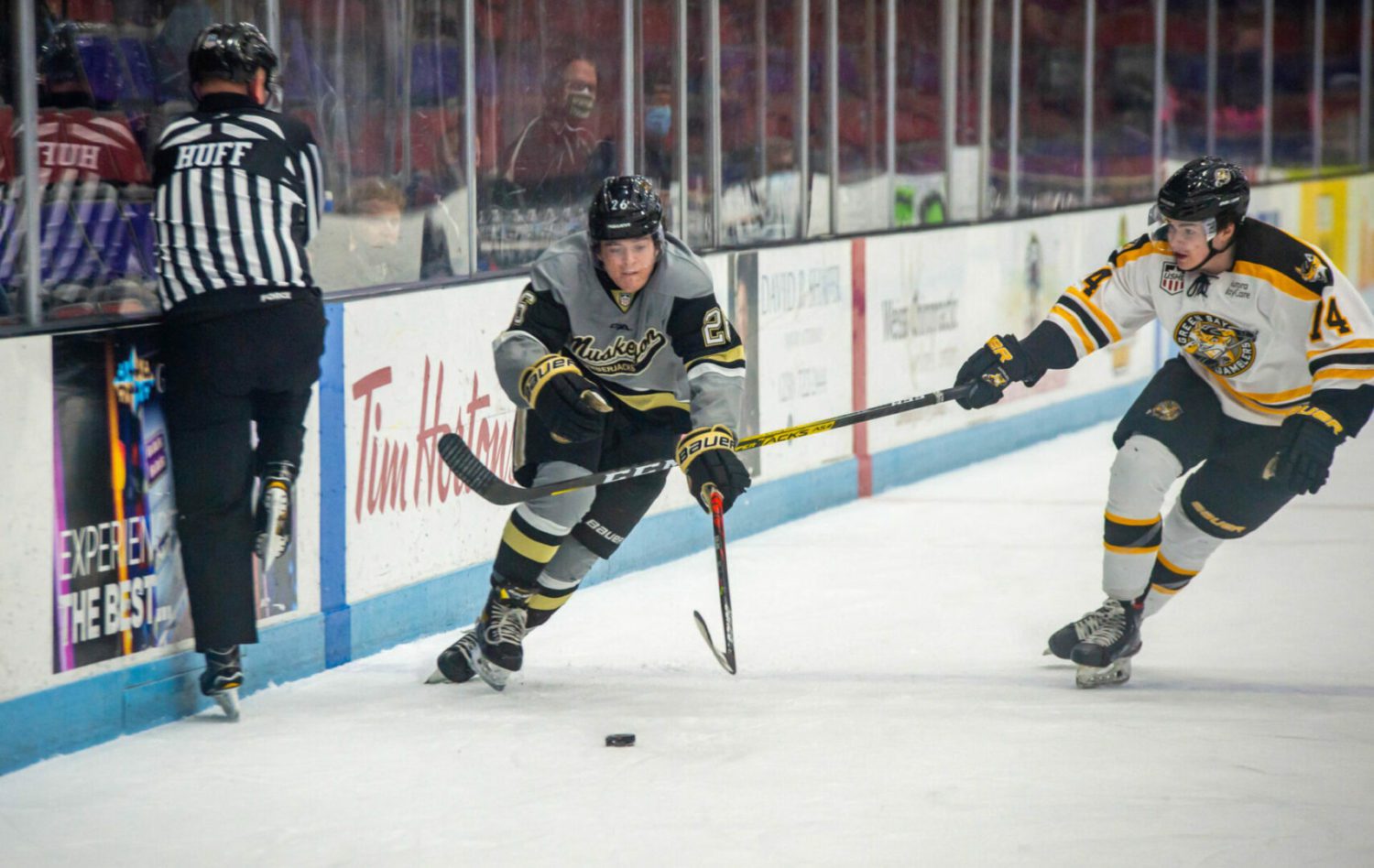 Muskegon’s No. 26 Tanner Kelly reaches out for the puck. Photo/Kristine Tyler 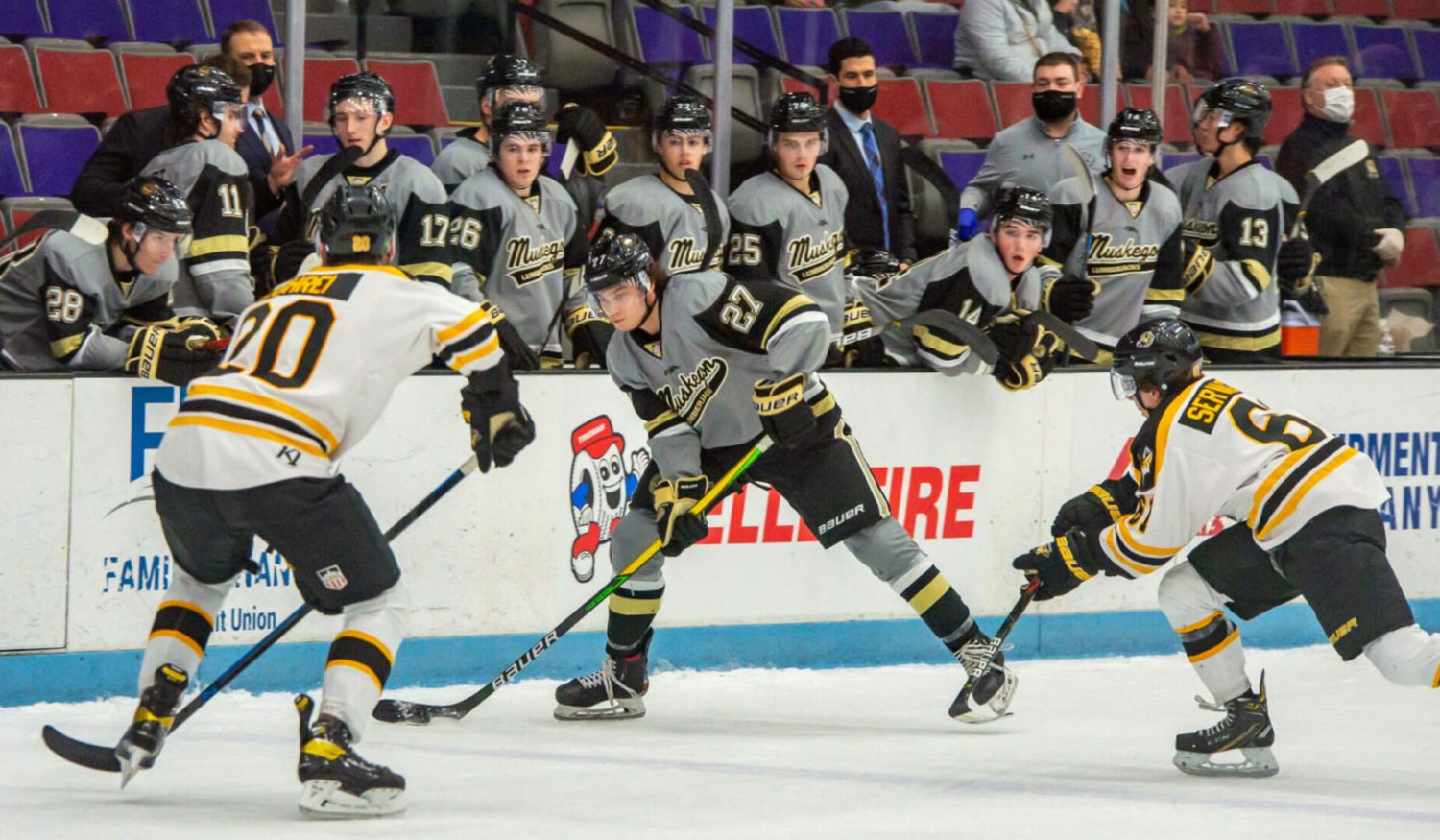 John Druskinis moves the puck in front of the Lumberjacks bench. Photo/Kristine Tyler