Jacks rally past Youngstown 4-2 after a scary injury to their teammate causes a long, frightening pause in the game

MUSKEGON – There was one word that summed up the mood at Muskegon’s Mercy Health Arena on Thursday night – relief.

The biggest relief came when the Muskegon Lumberjacks and their fans learned that defenseman John Druskinis is going to be all right. Druskinis was sitting on the bench and learning over the boards watching the action in the second period when he was struck near his eye by a flying puck.

He collapsed and convulsed on the floor of the team bench, and was down for about 20 minutes. The referees sent both teams to their locker rooms while trainers and medical personnel attended to Druskinis.

There was a big roar from the small crowd when he emerged conscious and sitting up as he was wheeled away on a stretcher and taken by ambulance to a local hospital.

After the game, Lumberjacks Coach Mike Hamilton said he was doing fine, and would likely be kept at the hospital overnight for observation.

The second big relief came after Druskinis’ scary incident, when the Lumberjacks rallied with three unanswered goals in the third period to defeat the Youngstown Phantoms 4-2, breaking their five-game winless streak. 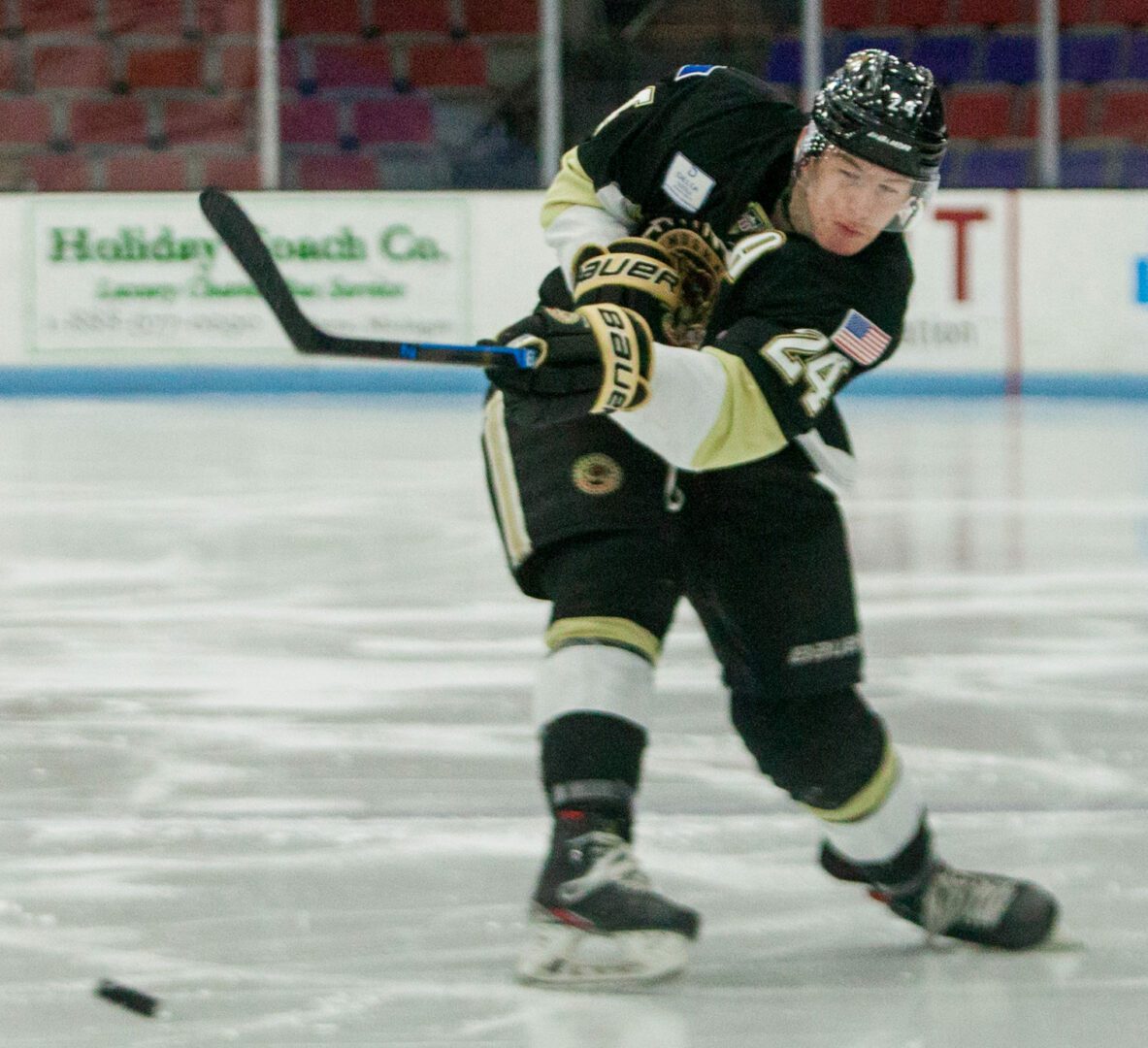 Hank Kempf sends a shot on net for a Muskegon goal after the intense break in action. Photo/Jason Goorman

The winning goal came from forward Cameron Berg at 7:08 of the third period. Berg said the team was fired up after learning their teammate was going to be fine, and came from behind to win it for him.

“All we knew was he got hit in the face with a puck and went down, and everybody was wondering what was going on,” said Berg, who scored his 18th goal of the season and broke a personal scoring slump that went back a few weeks. “Everybody was in shock, it was really scary, and we were really glad to hear he’s okay.

“We know how hard he works in practice and in every game, so we had a little chip on our shoulder. We wanted to win it for him.”

The Lumberjacks are now 17-11-3 on the season. They remain in second place in the USHL’s Eastern Conference with 37 points, three ahead of third-place Green Bay and seven behind first-place Chicago. Youngstown, the last-place team in the conference, fell to 6-15-3.

The two teams will play again in Muskegon on Friday night at 7:10 p.m.

The first half of the game was worrisome for the Jacks, who were eager to get back on the winning track, but couldn’t get a puck past Youngstown goalie Kyle Chauvette.

The Jacks’ frustration was compounded by the lack of success on the power play. They had two opportunities in the first period, but failed to mount a significant attack either time. The only goal of the first period came when Youngstown’s Yusako Ando scored at the 17:03 mark. 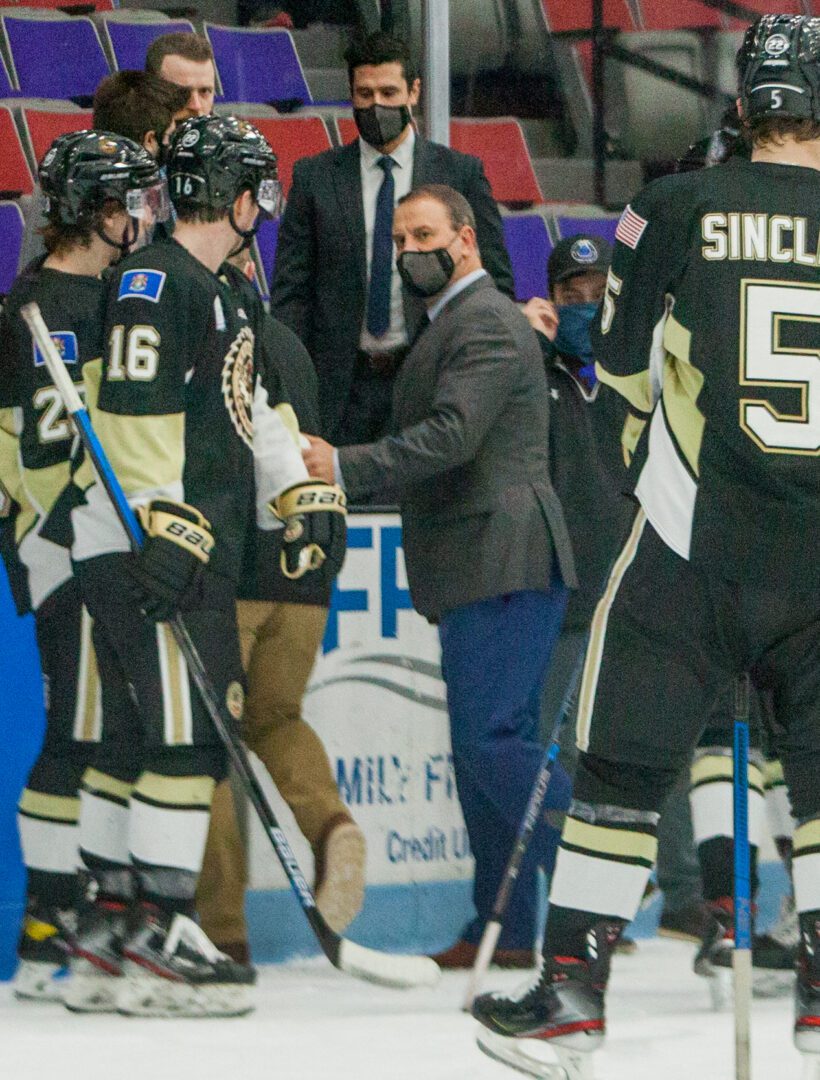 Lumberjacks Coach Mike Hamilton talks with his players shortly before officials sent the teams off the ice. Photo/Jason Goorman

The score remained 1-0 when Druskinis was struck by the puck at 13:38 of the second period, bringing a long delay to the action and sending a hush over the worried crowd.

“He broke his orbital bone (near his eye), and it sent him into a little bit of shock, he went into convulsions, and he had blood coming out,” Coach Hamilton said. “It was a scary, scary scene. It was a fantastic job by our trainers and doctors. Everybody was awesome in a scary situation.

“He’s doing good. He’s alert and back up and at it. He will probably be there (in the hospital) overnight. Our trainer and doctor are with him, and I’ll be going there to check in on him.”

The Jacks finally got on the scoreboard after Druskinis was wheeled from the ice. Hank Kempf scored his second goal of the season less than a minute later, then Youngstown’s Jack Larrigan found the net at the 16:53 mark, giving the Phantoms a 2-1 edge headed into the third period.

The teams were only allowed a two-minute break between periods, due to the long delay during the injury time out, but that was all the Lumberjacks needed.

Tom Sinclair tied the game 2-2 with a wrist shot from between the circles at 4:07. Then Berg put the Lumberjacks ahead for good with a goal from a tough angle deep in the left circle at the 7:08 mark.

Youngstown pulled Chauvette to gain an extra attacker with 1:28 remaining, but the strategy did not work. Muskegon’s Jack Williams put a cap on the victory with an empty-net goal with one second left on the clock.

Muskegon goalie Nate Reid got the win, stopping 26 of 28 Youngstown shots. He was at his best in the third period, when the Jacks were outshot 11-5 but did not give up a goal.

The Lumberjacks outshot the Phantoms 35-28 in the game.

“It wasn’t pretty by any means, but we just feel a little bit of relief,” said Hamilton, who knew his team was playing tense and perhaps trying too hard to break the winless streak. “Hopefully tomorrow we will be a little bit looser and will hopefully bring our offense back.”

Thomas Sinclair chases down a puck for Muskegon. Photo/Jason Goorman

Muskegon’s No. 15 Jack Williams gets hit from behind and just loses the puck. Photo/Jason Goorman

Thomas Sinclair gets ready to hammer home a goal for Muskegon. Photo/Jason Goorman

Robbie Yaunke takes equipment off the ice during the injury delay. Photo/Jason Goorman

Lumberjacks and Youngstown players leaving the ice during the injury delay. Photo/Jason Goorman

Tanner Kelly gets in front of the Youngstown net shortly before play stopped. Photo/Jason Goorman

Dylan Wendt tries to get his stick in front of the puck for Muskegon. Photo/Jason Goorman