MUSKEGON – Hank Kempf was more than ready for his big moment.

The second-year Muskegon Lumberjacks defenseman, who his coach calls one of the best in the league, missed 19 games earlier in the season with an injury, and didn’t return until late January.

He’s been thrilled to be back in recent weeks, helping the Jacks make a drive toward the Clark Cup playoffs, and he made a huge contribution on Saturday night. 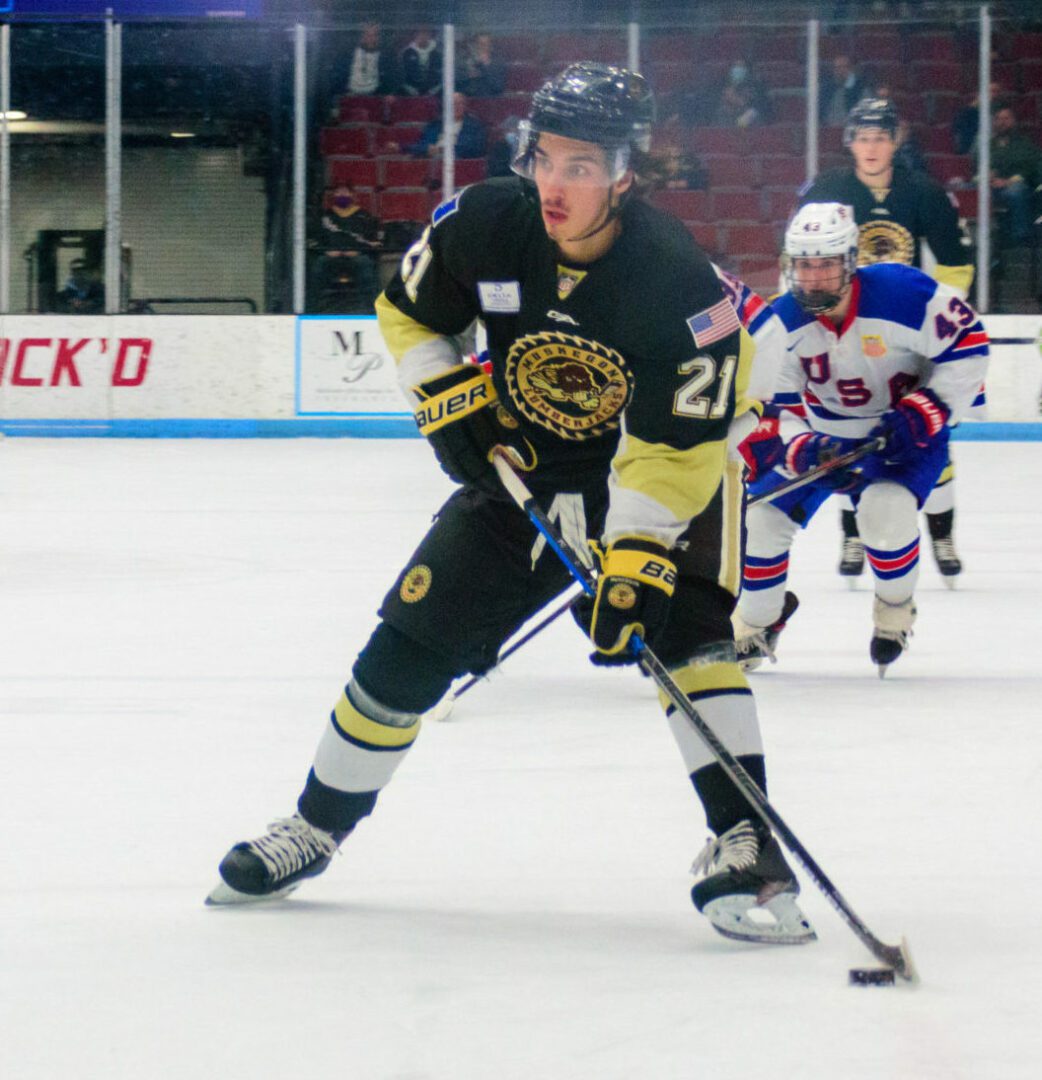 The Lumberjacks and the Team USA Under-17 squad were tied 2-2 in overtime, and it looked like the deadlock was headed to a shootout.

But Kempf, alone in the faceoff circle to the left of the USA goal as the Jacks made their final offensive rush, saw an opportunity to put the game away. He slapped his stick on the ice to get the attention of his teammates, then got a perfect pass from captain Dylan Wendt and powered a nasty one-timer into the goal, giving the Jacks a thrilling 3-2 victory at Mercy Health Arena.

“I’ve been practicing that weak side one-timer for a few weeks now, and I was ready for that one,” said Kempf. “It happened really quick. I passed it up to Bergie (Cam Berg) and he dropped it to Wendt off the rush. I was on the weak side and I was able to get ahead of their guy, so I had a lot of ice.

“You can tell everyone is in the midseason grind, and I’m the guy who missed 19 games, and I still have early-season hungriness.”

“He had been out since Thanksgiving, he is finally getting his legs back underneath him, and his offense is starting to come,” Hamilton said. “He is the best defender in the league, and he can shoot the puck.”

The win gave the Lumberjacks a three-game sweep for the weekend, following victories over Youngstown on Thursday and Friday. The sweep made up for an awful weekend last week, when they lost three games to Green Bay at home that extended their season-long losing streak to five games. 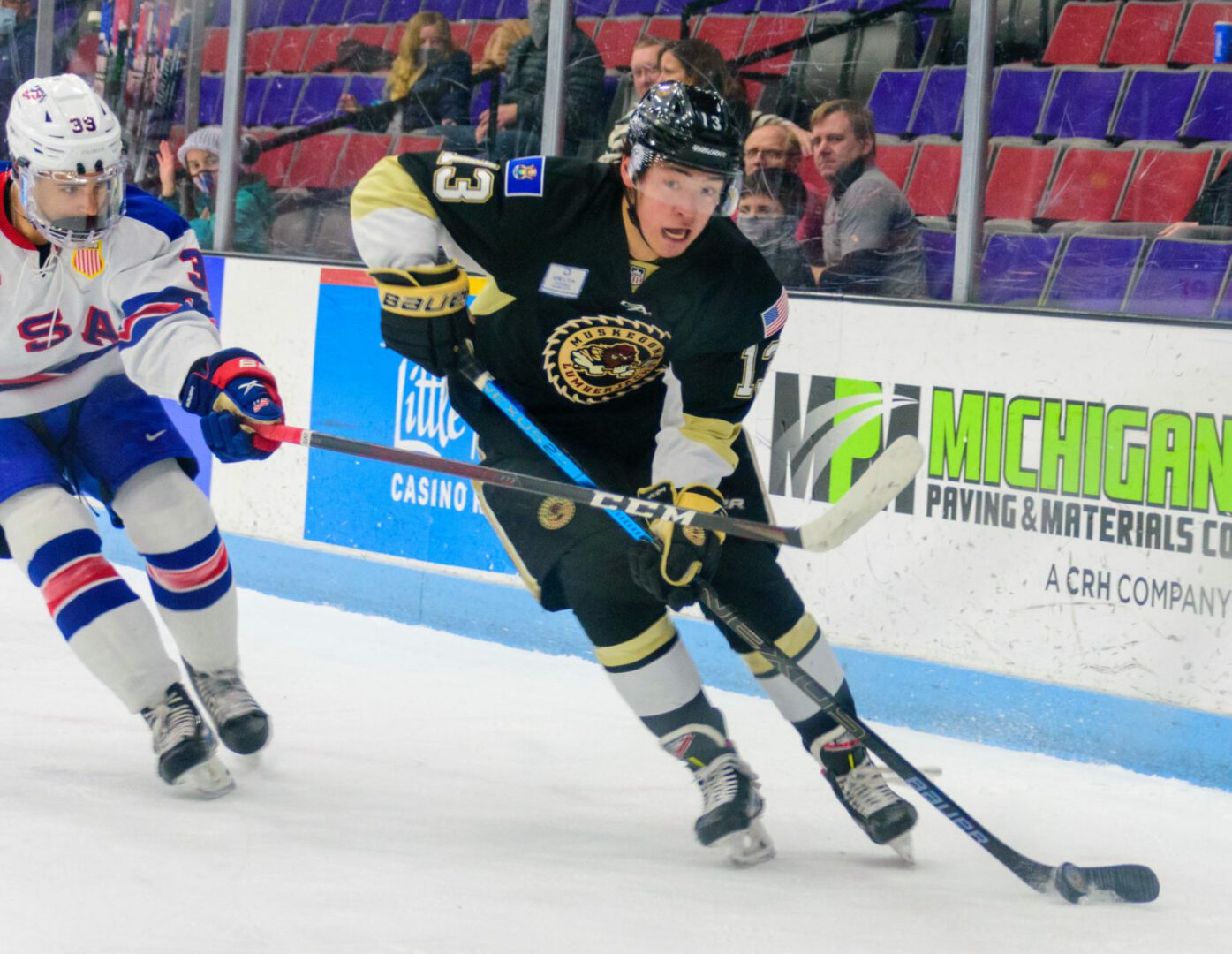 Muskegon is now 19-11-3 on the season with 41 points in the USHL Eastern Conference standings. They remain in second place in the conference, five points behind first-place Chicago.

“Six points in this league, I don’t care who you are playing, it’s a great weekend,” said Hamilton about the three big wins. “To be honest that was our best game of the weekend. It was a complete effort from our team.”

While Kempf was the obvious hero of the game, goalie Nathan Reid played a huge role for the third straight night. He had strong performances and got the wins on Thursday and Friday, before spending the first part of Saturday’s game on the bench.

Reid was 17-for-17 in the save department, drawing raves from Coach Hamilton after the game.

“Reider (Reid) was 3-0 this weekend, and if he is not the goaltender of the week (in the league), then I don’t know how to pick them,” Hamilton said. “He was phenomenal for us.” 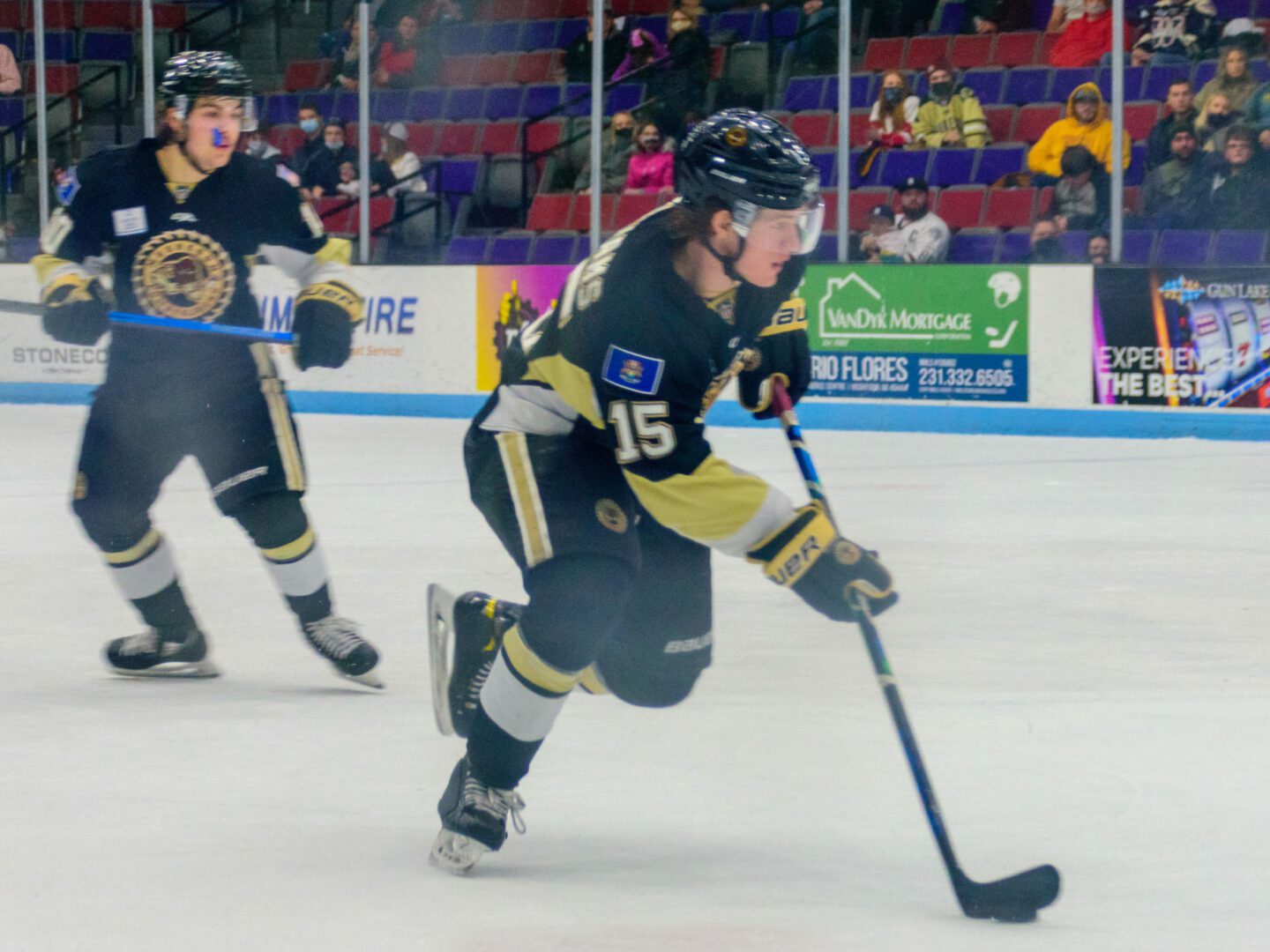 Team USA opened the scoring at the 8:18 mark of the first period when Cruz Lucius netted an unassisted goal.

The Jacks evened things up a little more than three minutes later when Alex Gagne, near the corner of the ice in Team USA territory, sent a perfect centering pass to Tanner Kelly, who found the goal to make the score 1-1.

Muskegon went up 2-1 at the 15:01 mark when Cristophe Tellier stole the puck near the Team USA blue line.  He broke in on a 2-on-1 break, then made a nice pass to Berg, who put a hard shot into the USA net.

The Jacks could have had a lead at that point, if it weren’t for a few missed opportunities.

The first came when Jack Williams was awarded a penalty shot at 6:26 of the first period, but was stopped on the attempt by Team USA goalie Tyler Muszelik.

They had a two minute power play early in the second period, but failed to get a single shot on goal with the one-man advantage. About three minutes later they had a four-minute power play after Team USA’s Cole Knuble was sent off for high sticking, but they not only failed to capitalize, but gave up the shorthanded goal with 50 seconds left in the power play.

The third period was scoreless, which was lucky for the Lumberjacks, because they were whistled for a penalty late in the game, giving Team USA a skater advantage for the last 1:41 of regulation and the first 19 seconds of overtime.

But the Jacks’ penalty kill unit did its job, giving Kempf the opportunity to score the dramatic winning goal late in the overtime period.

Berg finished with a goal (his 19th of the season) and an assist for the Lumberjacks while Gagne, Quinn Hutson, Tellier and Wendt each had single assists.