Montague got off to a hot start, doubling up Oakridge in the first quarter, 18-9. 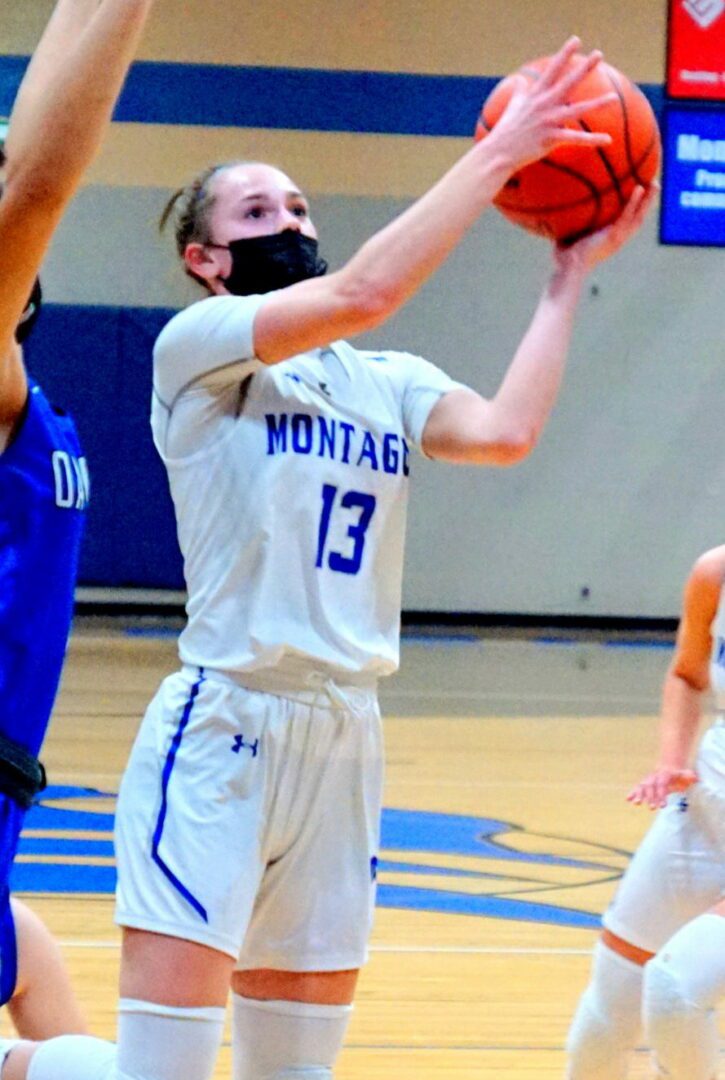 After that, the Montague defense locked up Oakridge, holding them to two points in the second to give Montague a 29-11 halftime lead.

It was more of the same in the third quarter, as Montague extended the lead to 36-15, holding Oakridge to just four points.

In the final frame, Montague outscored Oakridge 8-5 to cruise to victory.

Oakridge was led in scoring by Leah Lowry with 10 points, four rebounds and two assists.

The loss sends Oakridge to 3-5 overall, and 2-5 in conference play. 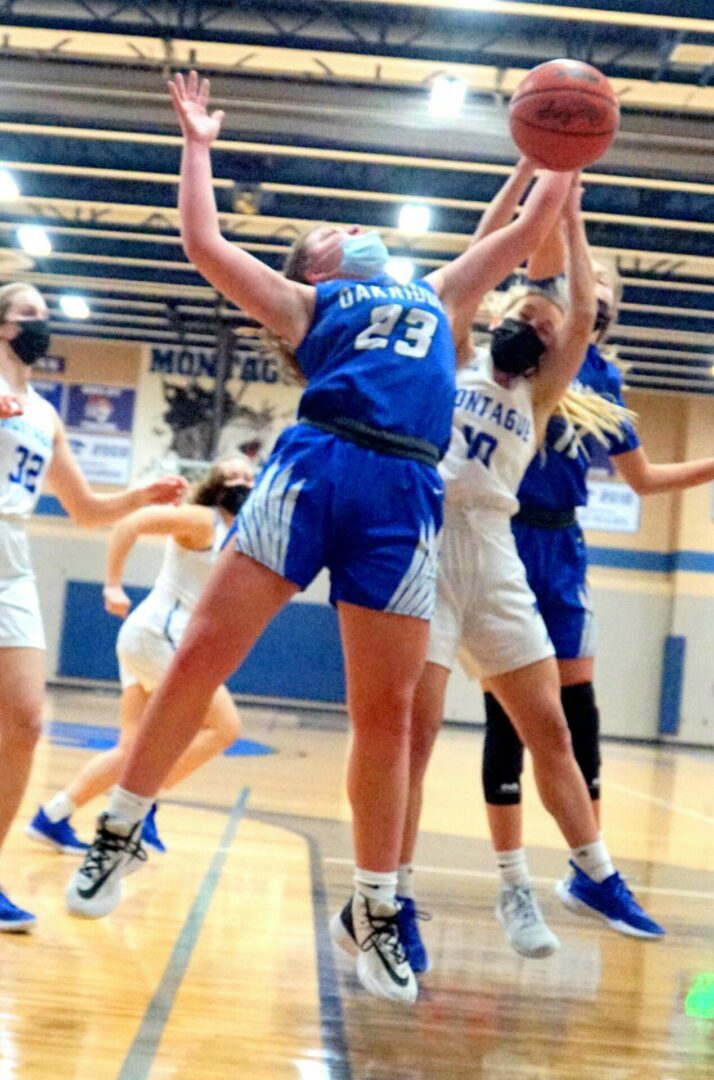 Delaney Rule fights for the rebound with Montague’s No. 10 Brooke Stark. Photo/Leo Valdez

The blowout was on from the outset, as Kent City shut White Cloud out entirely in the first quarter, taking a 13-0 lead into the second quarter.

It was more of the same throughout the rest of the game as the Eagles outscored White Cloud 41-14 over the final three quarters.

Kent City is now 8-0 on the season and 4-0 in the CSAA Silver Division.

FREMONT 52, REED CITY44- Haley Zerlaut had 19 points and six steals in the Fremont win over Reed City in their CSAA Gold matchup. 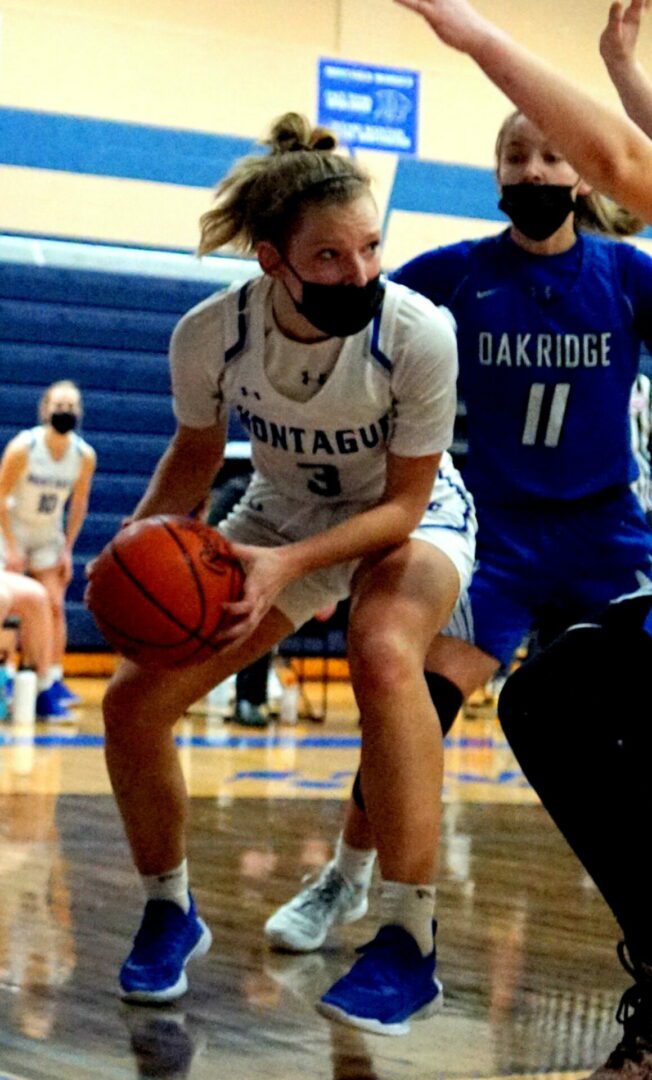 Kaitlynn Bennett had a double-double with 10 points and 11 rebounds while teammate Calla Miller had 11 points with 10 of them coming in the final quarter.

The Packers are now 2-6 overall and 2-5 in the conference. They’ll next host Grant on Monday.

Hesperia is now 1-3 overall and 1-3 in conference play. 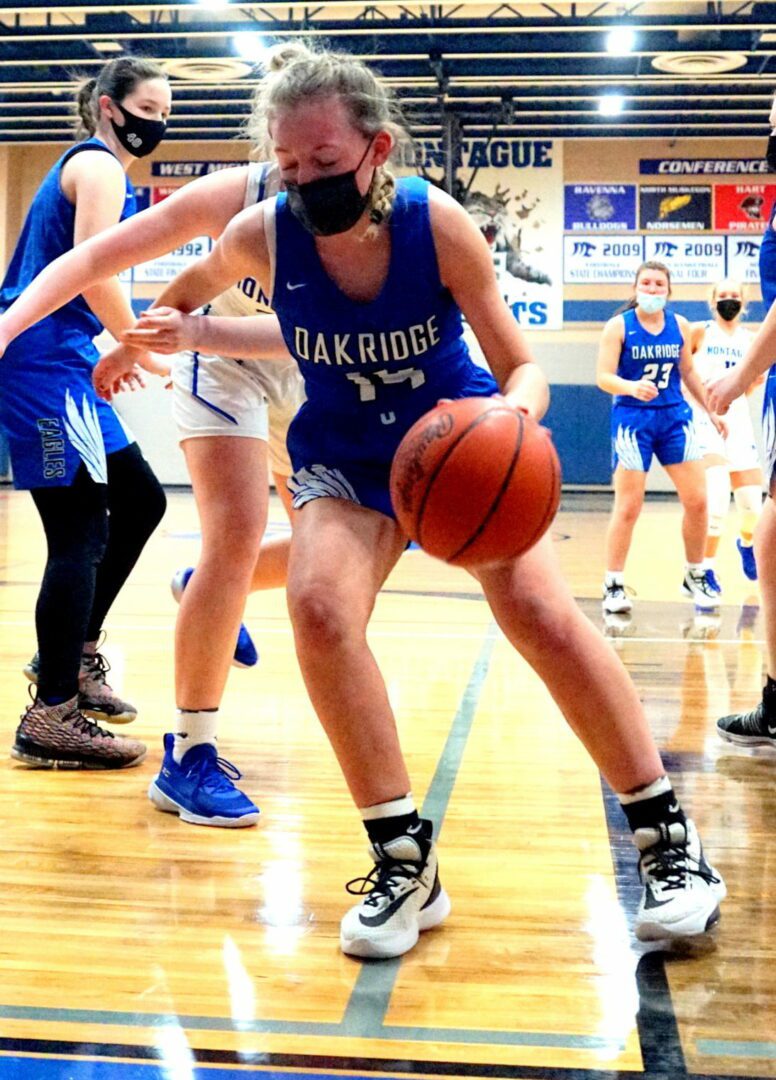 The game started off relatively close, with Ludington taking a 16-10 lead after the first quarter.

Following that, the Orioles completely took off, outscoring MCC 12-4 in the second to take a 28-14 lead into halftime and then extending that lead to 43-22 after the third quarter.

In the fourth, it was all Ludington as they shutout Muskegon Catholic 11-0 in the final quarter.

The win puts Ludington at 8-1 overall and 5-0 in the Lakes 8, while the loss puts Muskegon Catholic at 3-4 overall and an even 2-2 in the conference

WEST MICHIGAN CHRISTIAN 70, ORCHARD VIEW 8 – The Warriors dominated Orchard View while improving to 6-1 overall and 4-1 in conference play with a win on Friday night.

It was a dominant effort from the opening inbound, as WMC lead 18-3 after the first quarter and then 34-8 at halftime.

In the second half, the Warriors shut out Orchard View completely, leading to a 70-8 victory.

Maddie Wiersema had the best game of her career, scoring 27 points and going 12-of-15 from the field. Taylor Folkema followed that up with 19 points while nabbing nine steals on defense.

The Eagles led the first quarter 12-7 before trailing 16-14 at halftime.

Fruitport Calvary Christian took the lead after three quarters at 21-16 before outscoring Black River 10-4 in the final quarter.

The Eagles are now 3-3 overall and 2-2 in the conference.