MUSKEGON TOWNSHIP – In a pandemic-shortened and rushed season, it’s likely that teams may struggle offensively at times.

But even as the missed shots pile up, some standouts emerge. 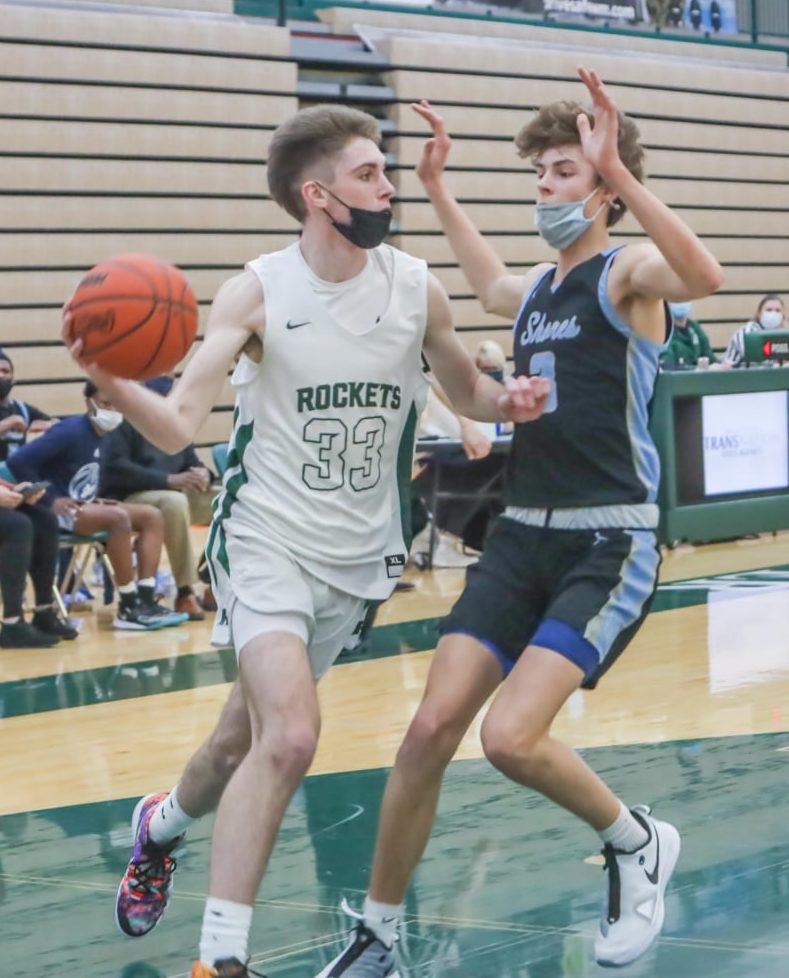 That was the case for the Reeths-Puffer boys basketball team, which overcame its early-season offensive struggles to beat rival Mona Shores 44-39 in an O-K Green conference matchup at R-P on Tuesday.

The star for the Rockets turned out to be freshman Jaxson Whitaker, who totaled 16 points in the victory. Senior Kaleb Mitchelson also played a big role, scoring 11 points, including five in the crucial fourth quarter.

“It was kind of his breakout game,” said Reeths-Puffer Coach Lance Johnson about how Whitaker helped carry his squad. “Tonight, he was huge for us because we were really struggling. He’s going to be a big player for us.”

“If felt good,” Whitaker said when asked about his performance. “When I was open, I was going to shoot it.”

In the first quarter, both teams struggled out of the gate with Mona Shores holding a narrow 7-5 lead at the buzzer.

Drew Southland of Mona Shores led all scorers with five points in the opening quarter while Mitchelson led the Rockets with three.

“Both teams struggled shooting the ball,” Johnson said. “We especially struggled making layups and free throws. We missed a ton of shots at the basket.”

In the third quarter, Whitaker added another five points to give Reeths-Puffer a 29-25 lead headed into the fourth. 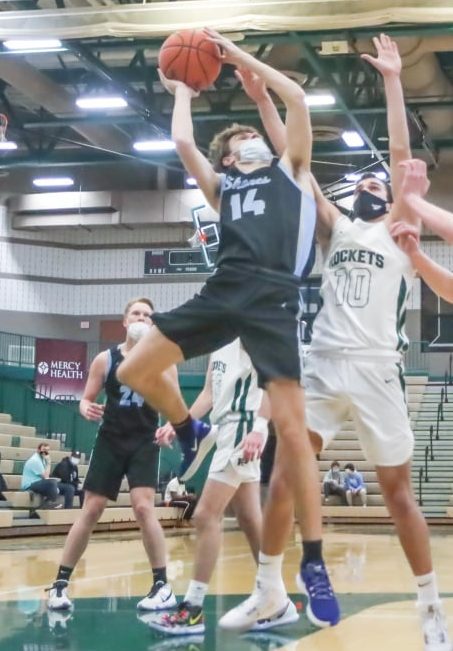 Mona Shores’ Drew Southland goes up for a shot over No. 10 Coby Mitchelson. Photos/Joe Lane

Mona Shores outscored Reeths-Puffer 12-9 over the final six minutes but was unable to overcome the Rocket lead.

Mona Shores ,which fell to 1-3 overall and 1-3 in conference play, was led by Southland with 15 points and Russell with 11.

The Sailors are working hard to continue to improve after winning only three games last season.

“Even counting our win against Union, I thought we played better tonight,” said Mona Shores first-year Coach Brad Kurth about what his team displayed in the loss. “We did some fixable things, and I told the guys in the locker room that this loss was mine.”

The Rockets improved to 3-1 overall and 2-1 in conference play.

“It feels good to be 3-1,” Johnson said. “We got a lot of young guys in their first year on varsity. We’re playing two freshmen a lot. I’m glad we got the win tonight, but we’ll have to play a lot better.”

Reeths-Puffer’s No. 24 Jaxon Whitaker rolls the ball of his finger for a layup. Photo/Joe Lane