This year he’s the Lumberjacks’ only Jack Williams, and he’s turning heads with his improved offensive production

MUSKEGON – Last season Muskegon hockey fans were familiar with the name Jack Williams, but they were never quite sure which Jack Williams you were referring to.

The goalie has moved elsewhere in his hockey career, but the forward returned to Muskegon for a second season, and based on his play so far, everyone knows exactly who you mean when you say Jack Williams.

Williams, 18, a native of Biddeford, Maine, has amped up his offensive production this season, helping the Lumberjacks become one of the most dangerous teams in the league. The Jacks are currently tied with the Chicago Steel for the most team goals in the USHL at 111. 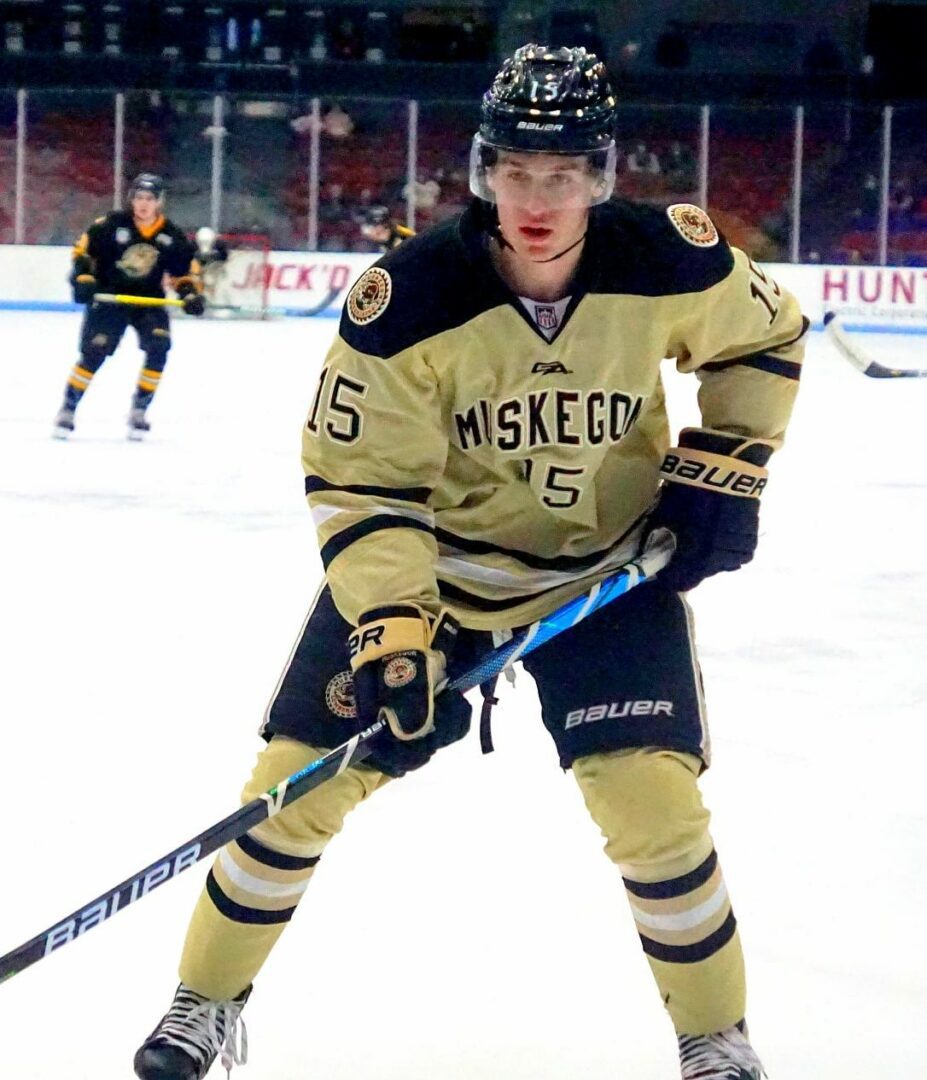 Jack Williams has seven goals and seven assists for the Lumberjacks so far this season.

That group also includes Williams, who currently has 7 goals and 7 assists, including two goals and an assist in last Friday’s 9-4 victory over the Team USA Under-17 squad. In only 22 games, he has already surpassed his offensive output from last season, when he totaled 6 goals and 7 assists in 44 games.

“I think for me confidence has been really good,” said Williams, who’s committed to playing college hockey at Northeastern University. ”I’ve been wanting the puck on my stick a little more. I put in a lot of work over the summer to get bigger, faster and stronger, and it’s paying off.

“I think last year was a year of development and growth for me. This year has been a lot better.”

Lumberjacks Coach Mike Hamilton said Williams is an all-around player who is dependable on offense and defense, has earned increased ice time this season, and is taking advantage of his opportunity.

“Jack is a guy who is completely responsible on all areas of the ice,” Hamilton said. “He’s been that way for two years. He’s a defensively sound player you can trust in any situation, and now the points have started to follow him.

“He’s being used in different situations this year. He’s been playing with more higher-end teammates and is used more on the power play. That’s all been earned by playing the game the right way. As a staff we know we can be comfortable putting him in any situation.”

Offensively, Hamilton said Williams has an “unbelievable shot,” and also get points through his willingness to do the dirty work on ice.

“He will go in front of the net, or in the corners to hunt pucks down,” the coach said. “He’s not afraid to get the ugly goal.”

Williams agrees with that assessment.

“I think I’m a bit of an edgier player with a little bit of skill,” he said. “A lot of my goals come at the goal mouth, when I’m just mucking it up and getting rebounds.”

For many weeks, the Lumberjacks were in third place in the USHL’s Eastern Conference, chasing second-place Green Bay. They finally leaped into second two weekends ago when they swept Green Bay in two games at home.

Now they have their sights set on the first-place Chicago Steel, starting with a big three-game series between the two teams this weekend.

Chicago will visit Muskegon on Friday night, then the Jacks will hit the road to visit the Steel on Saturday and Sunday. 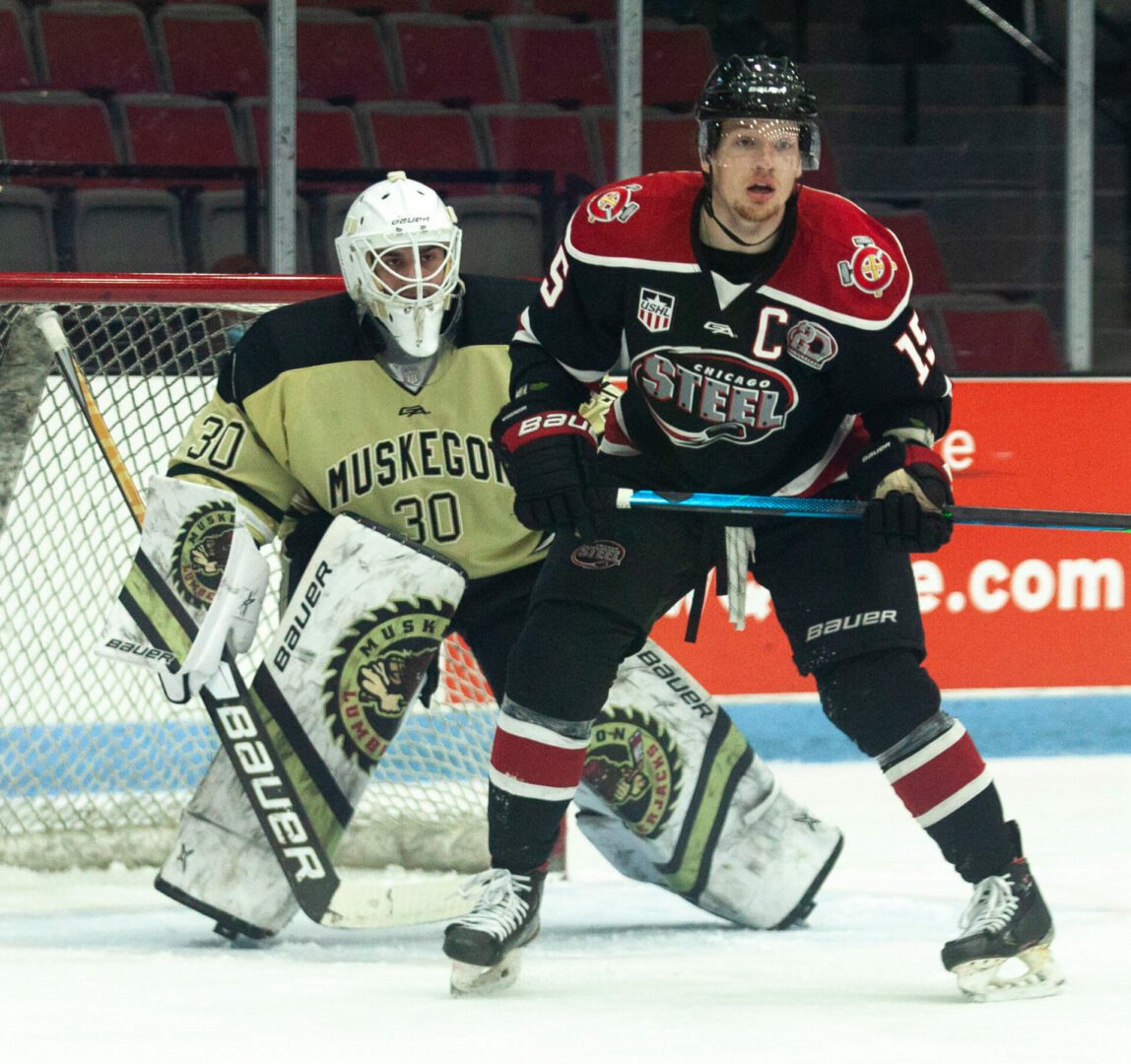 By the time the dust has settled, the Lumberjacks could find themselves at the top of the conference standings. Chicago (16-4-2) has 34 points, while Muskegon (14-7-1-1) has 30. A victory is worth two points, so if they Jacks were to sweep all three games, they would be in first place alone.

Green Bay is still very much in the race, as well, sitting in third place with 24 points.

The Jacks and Chicago have met three times so far this season, with the Lumberjacks winning two and Chicago taking one. All have been tight, entertaining contests. Muskegon won in Chicago 10-8 and at home 5-4, while the Steel won in Muskegon 6-5.

Hamilton said it’s too early to be worrying too much about who’s in first or second in the standings. On the other hand, he admits that the next three weekends – three games against Chicago this weekend, a home game against Team USA next Friday, then a three-game home set against Green Bay on Feb. 11, 12 and 13,will be a good measuring stick for the team.

“Ultimately our main goal is to keep getting better every day,” the coach said. “That sums up what we’ve been doing all season. These games are important, but they won’t make or break our season. But we’ve had this seven-game stretch circled for a long time, against Chicago, Team USA and Green Bay. The next seven games will tell us a lot about who we are and where we’re at.”

Hamilton admitted that the players get extra fired up to play the Steel, a fast, talented team that plays a wide-open brand of hockey.

“This weekend we’re getting to play the best team in our division,” he said. “When you look back, Chicago is the team that knocked us out of the playoffs three years in a row. It’s definitely a team we respect.”

The Jacks will have one extra weapon this weekend when standout defenseman Hank Kempf returns to the lineup after missing about the last two months due to a concussion.

“It’s a huge addition,” Hamilton said. “Hank is one of the best defensemen in the league.”