The monkey is off Montague’s back: Wildcats avenge last year’s state semifinal loss with a 49-14 thrashing of Grayling

MONTAGUE – There were probably a few Montague fans who were a little worried in the early going on Saturday, when their team coughed up two fumbles and fell behind in the first quarter.

But the Wildcats knew they were not going to let this big game get away. Not again. 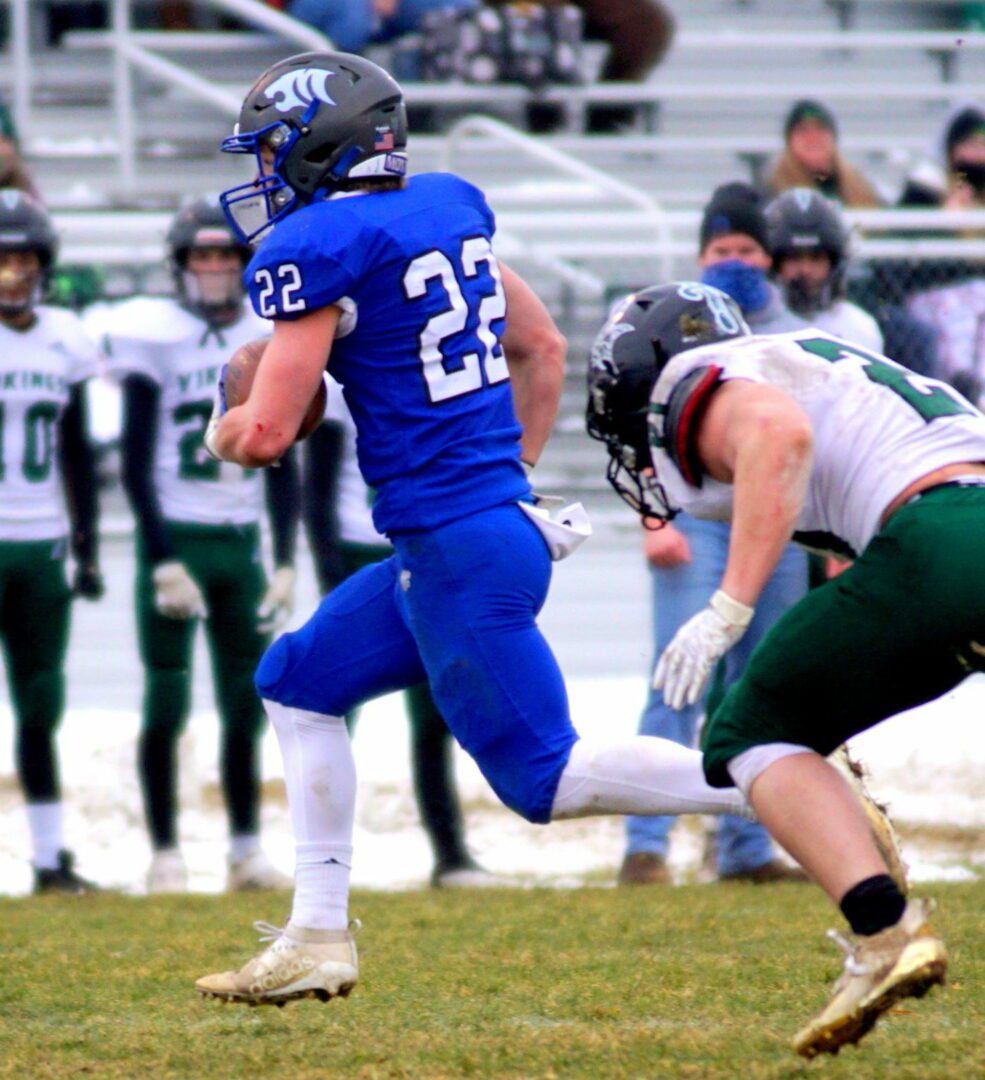 After squandering a big fourth quarter lead and losing in overtime in the 2019 Division 6 state semifinals against Maple City Glen Lake, the Wildcats were determined to avenge that disappointment and get back to the state finals.

They did that in resounding fashion, overcoming an early deficit to plow past visiting Grayling 49-14 on their home field in a semifinal matchup on Saturday.

Montague, now 11-0 on the season and ranked No. 1 in the state, will return to Ford Field for the second in three seasons next Friday, when they will play Clinton in the Division 6 state championship game. Clinton advanced by beating Constantine 40-6 in the other semifinal on Saturday.

The Wildcats were last in the finals in 2018, when they lost to Jackson Lumen Christi 42-28.

“Just having the opportunity to be here today is amazing, the way the year has been,” said Montague Coach Pat Collins, alluding to the strange season with fewer games and lots of starts and stops, due to COVID. “These guys deserve this. I’m just very proud of them. They just kept working hard and kept their focus on this game, and getting back to Ford Field.”

“It feels awesome,” said Montague senior quarterback Drew Collins, the coach’s son. “We had this game marked on our calendar all season. Every time we worked out in the weight room or on the field, (the 2019 semifinal loss) was what we would think of, so it feels good to relinquish that feeling.” 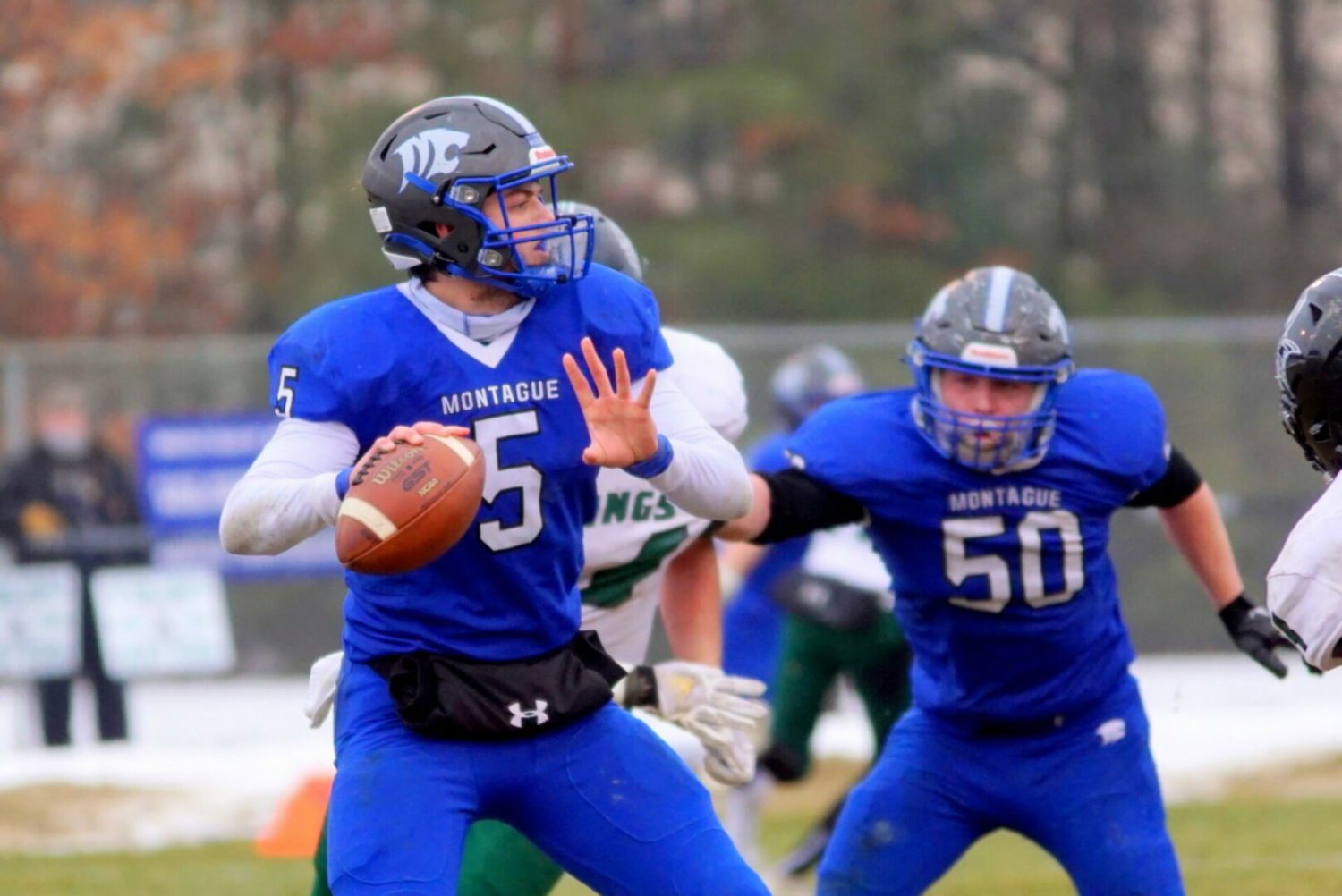 Drew Collins drops back to make a pass for Montague as No. 50 Alec Waruszewski watches after making the block. Photo/Leo Valdez

The Wildcats had a little trouble in the early going holding on to the football and getting their ground game going. But Montague has an offense that does a lot of things well, and when the rushing attack stalls, the Cats simply go to the air.

Drew Collins had another huge day, completing a series of pinpoint passes at key moments to help Montague overcome an early 7-0 deficit and take a 14-point lead at halftime, then pull away in the second half.

“Our offensive coaches do a great job of building a structure where we have comprehensive offensive schemes,” Pat Collins said. “If they are going to take the run away, you have to have the ability to throw the ball. We were able to do that, and I think that opened up the game.

“(Drew) can do multiple things. He is very composed, and accuracy is one of the top pieces of his throwing game. It works out for you in these types of games. You have guys covered, and you have to put it in the right spot, and the guys did a great job of catching the ball. The line also did a great job giving Drew time to throw.” 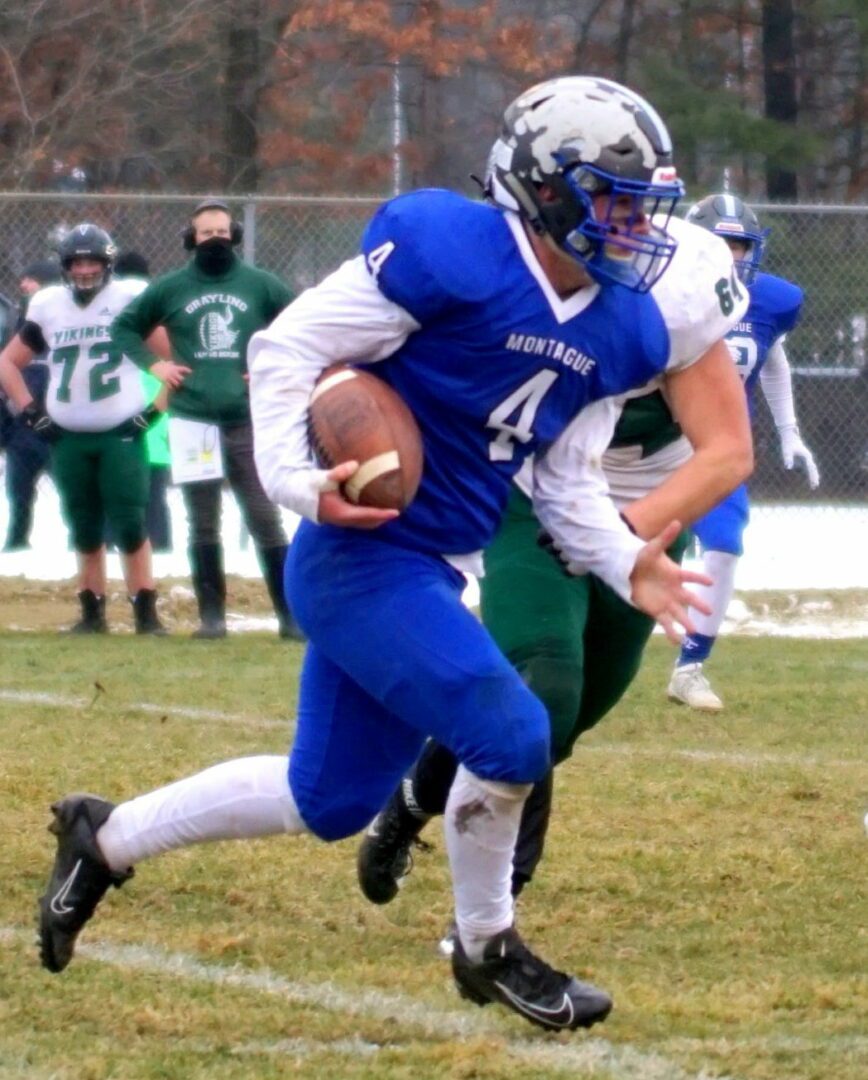 Drew Collins, a third-year starting QB, said he had a new group of receivers to break in this season, and they’ve been working on developing the passing game for almost a year.

“We did a lot of work since the spring,” he said. “We lost three of four receivers, and it took until January for it to really start to click, but throughout the season these guys have gotten so much better.”

Things did not start out great for Montague, which played on a clear field despite the overnight snow, due to a bunch of volunteers who showed up to shovel the playing surface early in the day.

Grayling took the opening kickoff and punted, and the Wildcats got the ball at their own 45, but junior running back Dylan Everett fumbled on the first play from scrimmage and Grayling recovered.

The Vikings took advantage of the turnover, driving 49 yards on nine plays to take the early lead. Grayling running back David Millikin scored from three yards out on fourth down with 4:23 left in the first quarter, and the extra point gave the visitors a 7-0 advantage.

The Wildcats took the ensuing kickoff and responded in kind, driving 66 yards on 10 plays to even the game up. Everett reversed direction on a handoff and scored from 27 yards out, and the extra point made the score 7-7.

Collins completed three passes, including a nine-yard toss to Owen Peterson and a 17-yarder to Sam Smith, to keep the drive alive.

Everett said he was inspired by his earlier fumble to run hard and help his team get control of the game. 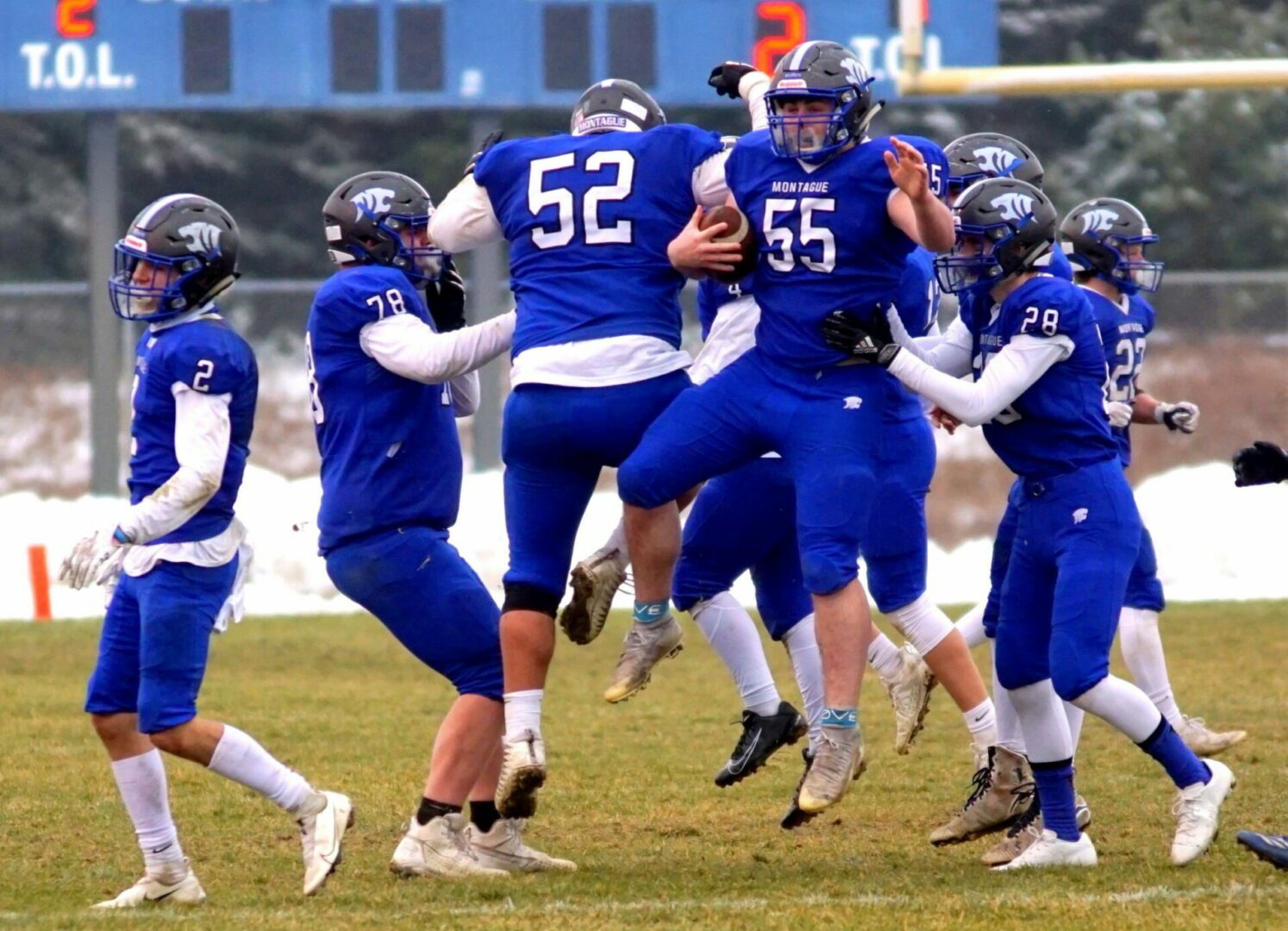 Montague’s No. 55 Aaron Rolf celebrates with ball in hand after a Montague defensive stop. Photo/Leo Valdez

“It made me pretty mad, the ball just came out of my hand,” said Everett, who finished with 100 yards rushing and scored three touchdowns. “The same thing happened (in the semifinals) last year, so I just put my foot down.”

Grayling punted early in the second quarter and Montague drove from its own 15 to the Grayling 2-yard line, powered by a 44-yard pass completion from Collins to Tugg Nichols. But the effort ended at the 3 when the Wildcats lost another fumble.

The Montague defense kept the Vikings pinned in their own end after the turnover, and a punt gave the Wildcats the ball back at the Grayling 34 with 5:09 left in the first half.

Collins promptly completed a 34-yard pass to Andrew Kooi, putting the ball at the Grayling 9-yard line. Everett scored his second TD with a three-yard rush two plays later, and the PAT gave Montague a 14-7 lead.

Grayling took the ensuing kickoff and drove to the Montague 35, but a swarm of Wildcat defenders shut down the Vikings on fourth-and-one, and possession turned over on downs. 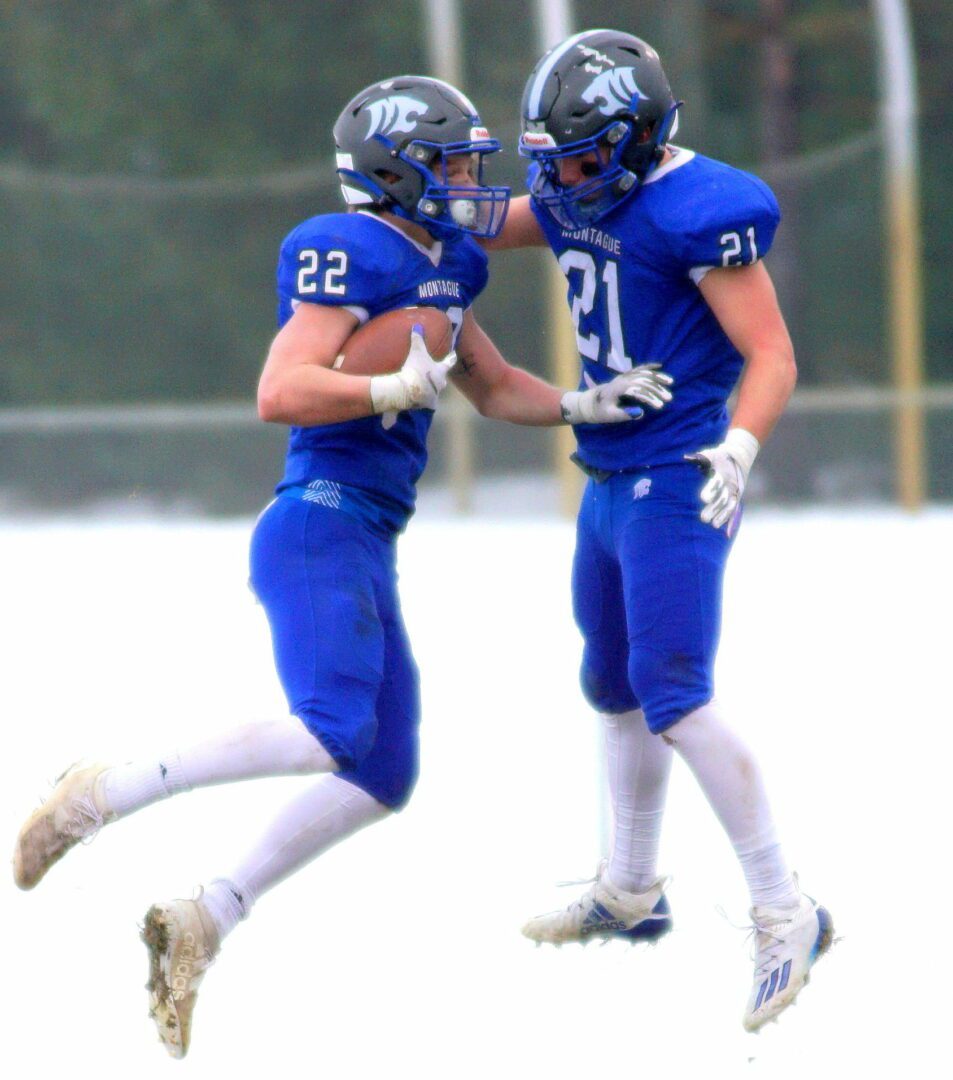 Dylan Everett and NO. 21 Tug Nichols celebrate in the end zone after an Everett TD. Photo/ Leo Valdez

On the next play, Collins connected with Everett on a 31-yard pass completion, putting the ball at the Grayling 23. Four plays later, the QB completed a screen pass to Peterson, and he dashed into the end zone from 13 yards out. The extra point was good again, and Montague led 21-7 with 24 seconds left in the half.

The Wildcats then recovered an onside kick and tried to add a few more points, but nothing came of it and Montague went to the locker room with a 14-point lead.

The second half was all Wildcats. Grayling’s opening kickoff was very short, and Montague took the ball at its own 48. On the first play of the drive, Everett broke loose for a 29-yard run, and two plays later scored from the 15. Another extra point from Kooi made the score 28-7.

On Grayling’s next drive, Peterson picked off a pass and returned it 63 yards for a touchdown, and the PAT made the score 35-7 with 7:51 left in the third quarter.

Peterson had another interception on the next Grayling drive, and four plays later Collins tossed a 34-yard touchdown pass to Kooi. The extra point gave the Wildcats a 35-point lead, resulting in a running clock with 2:29 left in the third.

Zach Nelson wrapped up the scoring for Montague with a three-yard TD run early in the fourth quarter. Millikin had a touchdown run for Grayling with 31 seconds left it the game.

“Our thought our guys did a great job of getting dialed back in and getting settled down and focused,” Coach Collins said about his team’s response to the shaky start. “It just shows how mature we are in our senior group to be able to do that. Championship teams are able to face adversity.”