MUSKEGON – In a fast-paced contest between the two highest scoring teams in the league, who would have expected a goalie to be the biggest hero of the game?

The Muskegon Lumberjacks were clinging to a one-goal lead over the first-place Chicago Steel after two periods on Friday night, and everyone knew the Steel would come at them hard in the third period.

That turned out to be the case, with the visitors outshooting the Jacks 14-5 in the final 20 minutes. But Muskegon goalie Jan Skorpik came up with one big save after another under intense pressure, and kept the Steel from tying things up.

Danil Gushchin finally settled the issue with an open-net goal with 16 seconds remaining, and the Lumberjacks skated away with an exciting 5-3 victory at Mercy Health Arena in a showdown between the top two teams in the USHL’s Eastern Conference.

Skorpik stopped 30 of 33 shots in the game to get the win and improve his record to 9-4 on the season with a 3.78 goals against average.

“I wasn’t nervous, and I couldn’t be nervous,” said Skorpik, a native of the Czech Republic, who started the season as the backup goalie, but inherited the starting job over the past month. “I expected they would come at me hard because they are an offensive team. I am feeling better because coach believes in me, and that’s a great feeling, and I wanted to give them a win.”

“He definitely made some huge saves for us,” said Lumberjacks Coach Mike Hamilton about Skorpik’s performance. “A lot of times it’s not letting them have their second and third chances, and he did a good job controlling those rebounds. I was really impressed and thought he was the number one star tonight. He has been good for a long time now.” 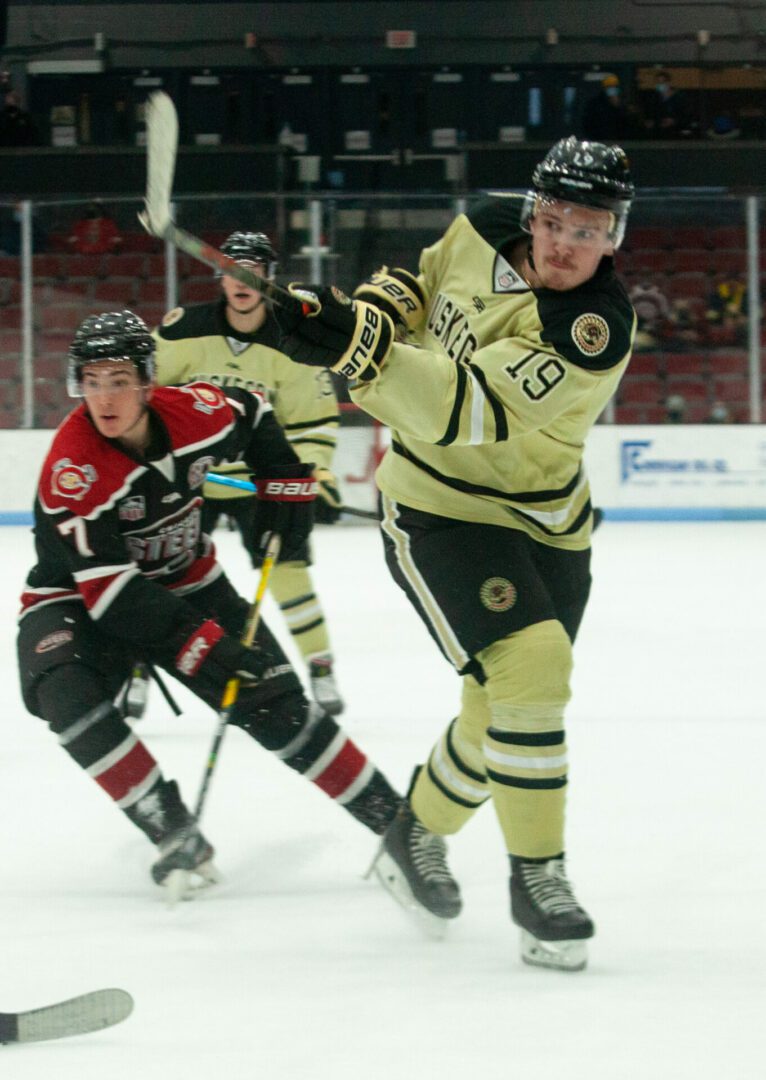 Muskegon’s Bradley Marek follows through after a shot on goal. Photo/Jason Goorman

The Lumberjacks have now won three of four games against the Steel this season, and pulled within just one win (two points) of Chicago in the battle for first place in the Eastern Conference. Chicago, now 16-5-2 on the season, has 34 points in the standings, while Muskegon, 15-7-1-1, has 32.

The Lumberjacks will have an opportunity to take over first place this weekend, but that would require a three-game sweep, which will not be easy. The Jacks will travel to Chicago on Saturday and Sunday for the final two games of the weekend series.

“I know we are going to have to play better to win in their building,” Hamilton said.

The Lumberjacks came out hot on Friday, collecting a pair of first-period goals to take a 2-0 lead into the locker room. The first came on a power play just 1:27 into the game, when Jacob Guevin let loose a shot from the point that found its way through traffic and into the Chicago net.

The second goal, scored by Tyler Dunbar, came at the 18:03 mark.

Chicago struck back in a wild second period. Josh Doane put the Steel on the board with a goal at 4:19 of the period, then the league’s scoring leader, Matt Coranado, connected at the 11:05 mark to tie the game 2-2.

The Jacks retook the lead at 13:06 of the second period when Nick Portz, who was acquired in a trade last week, scored his third goal as a Lumberjack when he took a pass from Gushchin in front of the net and chipped the puck past Chicago goalie Simon Latkoczy.

The game winning goal for the Lumberjacks came just over a minute later, when Jack Williams broke in alone on the Chicago goal and was brought down from behind. He was awarded a penalty shot, and calmly stick-handled toward the goal, then popped a shot past Latkoczy to give Muskegon a 4-3 lead after two periods. 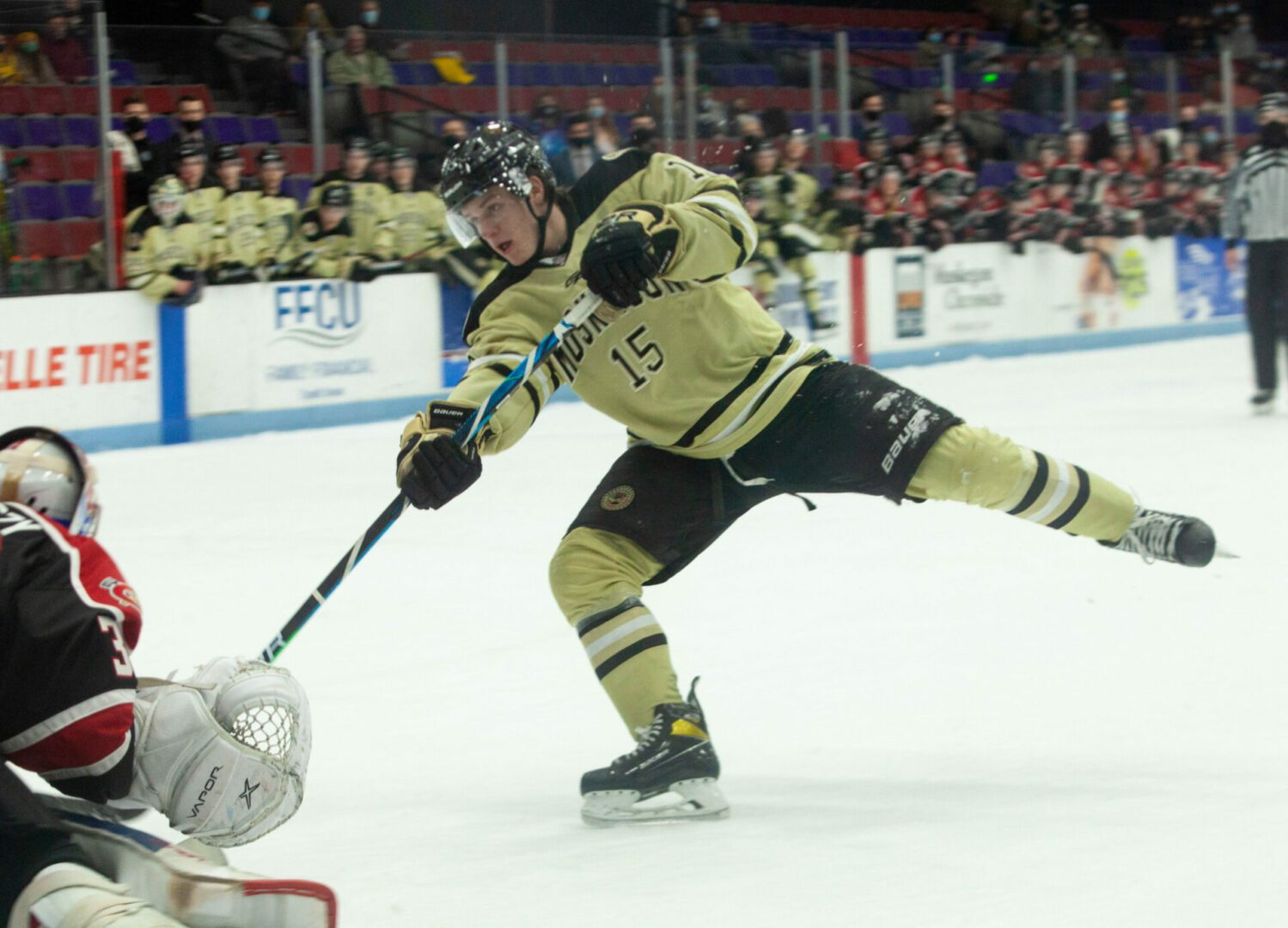 “They made some adjustments after the first period and momentum let them tie it up, but the good news was we found one to get back on top,” Hamilton said. “It was one of those games where they got it going a little bit and we were hanging on. But we kept the game in front of us and played solid defense. That’s how you have to win some games against good hockey teams.”

Skorpik got hot in goal for Muskegon in the third period, stopping everything the Steel threw at him, including several shots during a Chicago power play that came with eight minutes left.

The Steel pulled their goalie near the end to have a 6-5 skater advantage, but Gushchin made them pay when he scored his open-netter with 16 seconds left. The goal was his 15th of the season, and brought him within four points of tying the career Lumberjacks point record, currently held by Matej Paulovic, who had 119 points during his time in Muskegon.

The Lumberjacks penalty-killing unit was effective all night, stopping the Steel on all three of their power play opportunities.

Gushchin, Guevin, Portz and Tanner Kelly had assists for the Lumberjacks.

The Lumberjacks celebrate after the Gushchin empty netter. Photo/Jason Goorman

Cam Berg races to save an icing call against the Steel. Photo/Jason Goorman

Muskegon’s No. 15 Jack Williams gets ready to find the net. Photo/Jason Goorman

Muskegon’s No. 28 Quinn Hutson finds himself with the puck in front of the Chicago net. Photo/Jason Goorman