EGELSTON TOWNSHIP – In a season full of constant challenges, it’s sort of fitting that the Oakridge football team will face perhaps its biggest challenge on the field this Saturday in a Division 5 regional championship game.

Oakridge will travel to Grand Rapids Catholic Central to take on the powerful Cougars at noon, with a berth in the state semifinals at stake. The winner will face the survivor of the Reed City-Freeland regional final. 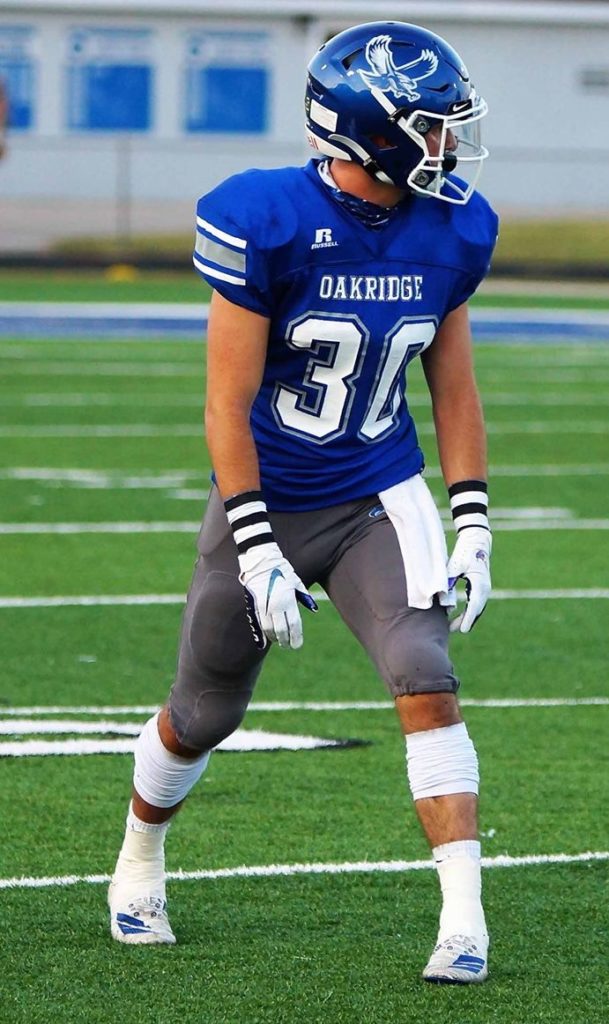 In a game earlier this season, Oakridge senior Jacob Danicek lines up at the receiver spot. Photo/Sherry Wahr

“They’re excited,” said Oakridge head coach Cary Harger about his players’ attitude toward restarting their playoff push that was postponed by the state on Nov. 15. “The mood has been more ‘let’s get it on’ rather than continuing to turn it on and then off.”

Oakridge, 7-2, is in the regional championship game after beating Chippewa Hills, Big Rapids and Tri County in district playoff matchups. The decisive 50-12 victory over Tri County clinched the Eagles’ first district title since 2017.

That was huge, because the state playoffs have been a point of pride and frustration for Oakridge in recent seasons.

On the impressive side, they have won enough games to qualify for the playoffs for 15 straight seasons, an accomplishment that very few teams around the state can brag about. It’s a testament to the rock-solid program that was built by legendary Coach Jack Schugars, and has been well-maintained by Harger and his staff.

But making long postseason runs has been difficult for the Eagles in recent years. They won Division 5 state titles in 2005 and 2008, and advanced to the semifinals in 2013, but failed to make it past districts in five of the last six seasons.

“That’s been a huge goal for us, because of the way the cards have fallen for us the last few years,” Harger said about finally winning another district championship trophy. “We’ve faced some very strong teams, and with injuries and what not, we hadn’t been able to accomplish what we wanted.”

If Oakridge is to win its first regional title since 2013 on Saturday, it will have to find a way to beat Grand Rapids Catholic, the reigning Division 4 state champion, which won three of the last four D4 state titles before dropping to Division 5 this season.

The Cougars’ roster is full of big-time college commits. One is senior wide receiver Jace Williams, who has totaled 614 yards and 14 touchdowns on 38 receptions this season.

Joining Williams as a first-team All-State selection is junior defensive back Nolan Ziegler, who is verbally committed to Notre Dame and has totaled 80 tackles and three forced fumbles this season. 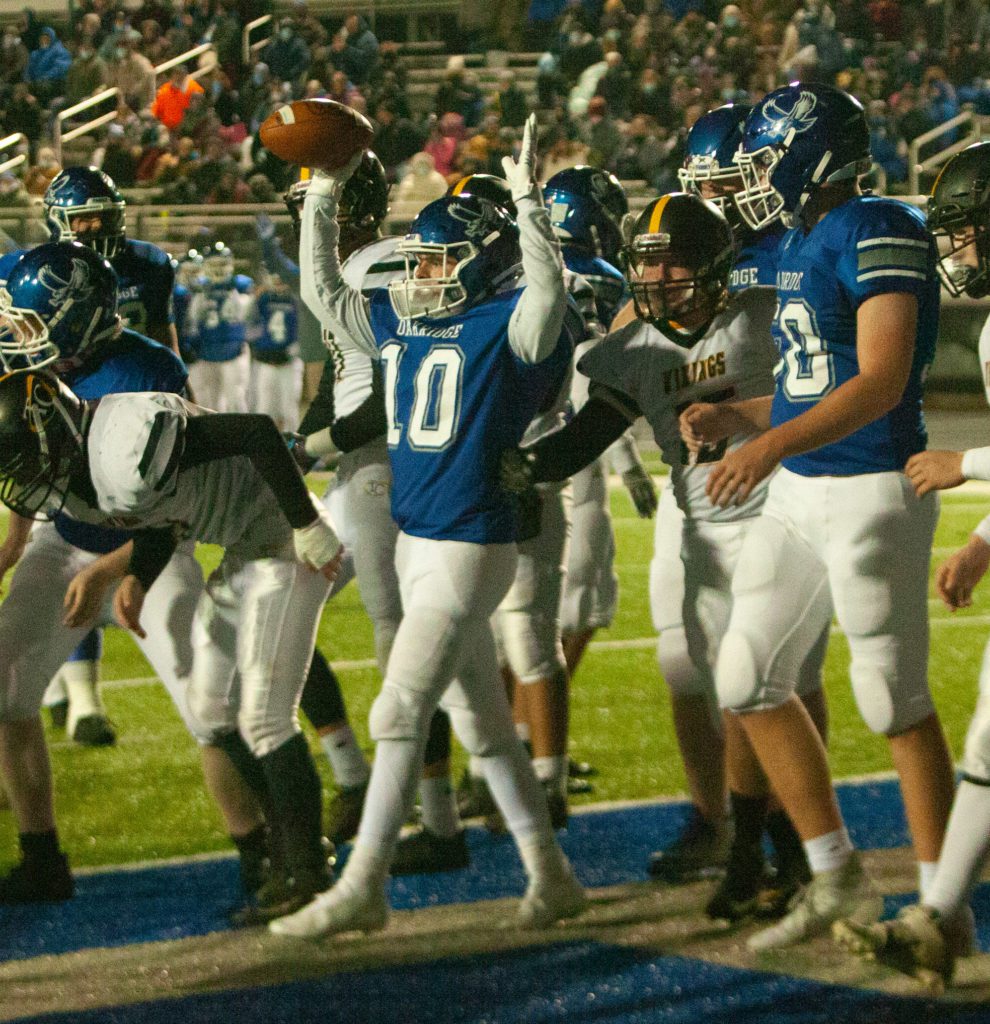 Brenden Raymond celebrates after finding the end zone for Oakridge in the Eagles win over Tri-County on Nov. 13. Photo:Jason Goorman

That’s a lot of talent for one high school football team.

“They’re very talented on both sides,” Harger said about GRCC. “They have some All-State guys and big-time college commits. But we’re just going to make sure we keep everything in perspective.”

The Eagles will not shy away from the challenge, because they have a stable of talent of their own.

Leading Oakridge is first team All-State running back Corey Vanderputte, who has totaled 1,506 yards and 22 touchdowns on 129 carries this season, while also catching six passes for 129 yards and two additional touchdowns.

“He brings a lot of determination and effort,” said Harger about his junior ball carrier. “This year started out very well for him. He put together a lot of good games, and it was actually surprising the number of yards he accumulated. He was a 1,000-yard rusher in six games, which was eye- opening for myself. He’s been great, and it’s a huge relief to have him, because he’s the type of guy who wants the role he has.”

Joining Vanderputte as Oakridge All-State selections are junior lineman Ethan Jozsa and senior linebacker Jacob Danicek, who were each named to the second team. Danicek has 34 tackles on the season, including three sacks and two tackles for losses.

Leading the Eagles at quarterback will be steady senior Ethen Dailey, who has thrown for 744 yards and 10 touchdowns.

Dailey’s favorite target has been Danicek, a skilled receiver on offense, who leads Oakridge with 298 yards and four touchdowns on 12 receptions, for an average of 24.8 yards per catch.

“He’s been great,” said Harger about the senior quarterback. “He gives a lot of confidence to the team because they see the standard he holds himself to. He kind of feeds that energy and determination onto the team, and they want to do well for him. It’s been great to have him and his leadership all season.”

If the Eagles are successful on Saturday, it’ll likely be due to sticking to their game plan and finding holes in the Cougars’ offense and defense.

“We have to make sure we’re getting our reads,” Harger said. “We have to see their personnel and have to know the game plan to put guys in the right spots to make plays and tackles. We have to make them work for everything they’re going to get.”