GRAND RAPIDS – The Oakridge football team, like other district champions throughout the state, got its wish to finish out its season, but it didn’t end the way the Eagles would have preferred.

The Eagles travelled to face perennial state power Grand Rapids Catholic, a big favorite, and endured a 58-7 loss on the Cougars’ home field in a Division 5 regional championship game on Saturday. 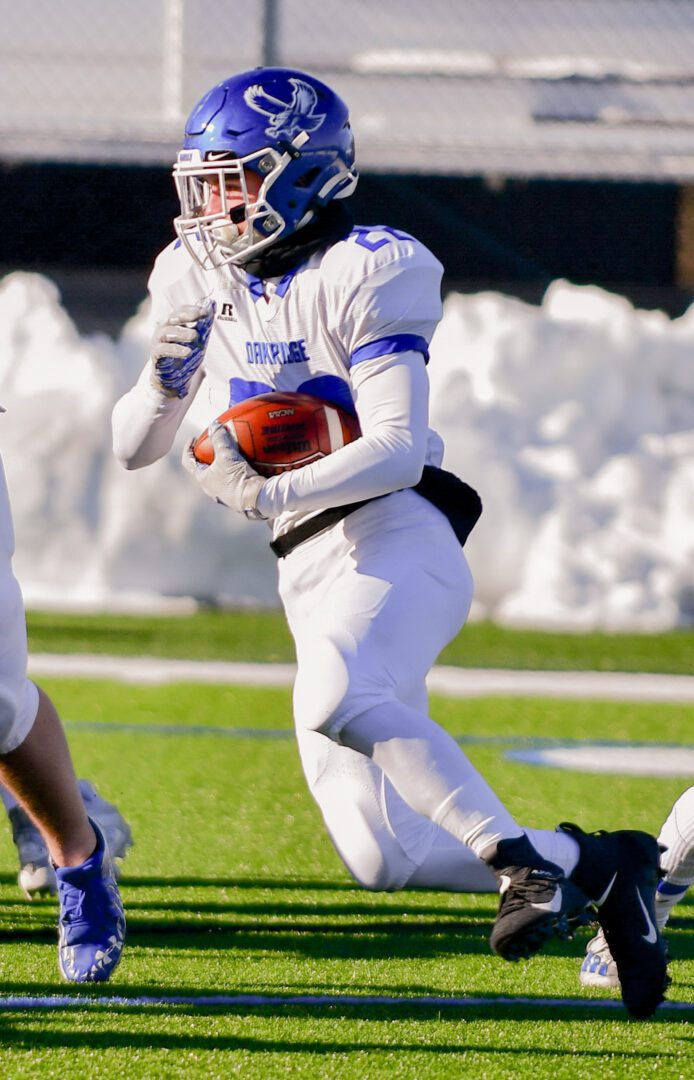 Corey Vanderputte looks through a hole on a rush for Oakridge. Photo/Michael Banka

“They’re very talented,” said Oakridge head coach Cary Harger about Grand Rapids Catholic, which won three out of the last four Division 4 state titles, including last season, before dropping to Division 5 this season. “They have team speed to no end and have an abundance of guys they can rotate in. We just couldn’t keep up with that and they’re a very good team.”

The Eagles were ambushed from the start, trailing 14-0 after one quarter. The two Cougar scores came from Quarterback Joey Silveri finding Jace Williams and John Passinault for 4- and 15-yard touchdown passes, respectively.

In the second quarter, Silveri threw to Williams for a four-yard score to increase the lead to 21-0 with 11:49 left.

The Eagles started their following possession at their own one-yard line following a mishap on a kickoff. Three plays into the drive, Oakridge quarterback Ethen Dailey was tackled in the end zone for a safety, making the score 23-0.

GRCC’s Nick Hollern then broke loose for a 33-yard touchdown run to put the Cougars up 30-0 with 10:10 left in the second quarter.

With 4:32 left, Silveri connected with Williams for a six-yard touchdown pass, increasing the Eagle deficit to 37-0. The touchdown reception was the 46th of William’s varsity career, setting a new state record.

The last points of the first half came with 1:09 remaining when Silveri found Daniel Krajewski for a 33-yard touchdown completion, making the score 44-0 at the break.

In the third quarter, Jack Rellinger scored on a 14-yard touchdown catch to make the Cougar lead 51-0.

The lone Eagle touchdown came on a screen pass from Dailey to Corey Vanderputte, covering 64-yards. The final score of the game was a 33-yard touchdown run by GRCC’s Devin Fridley-Bell. 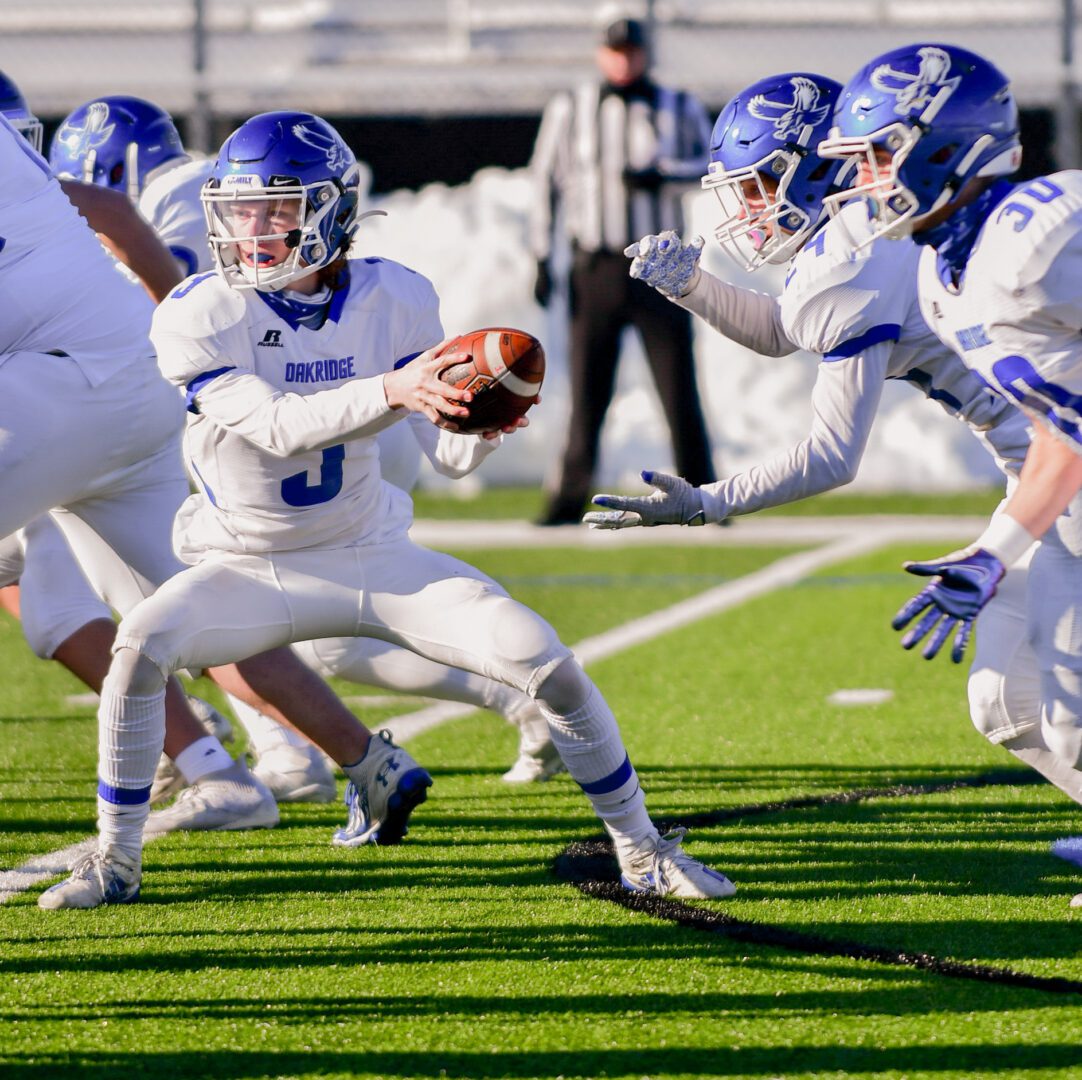 No,. 24 Gage Lamadline gets ready to take the handoff from Oakridge QB Ethen Dailey. Photo/Michael Banka

Overall, Vanderputte led the Eagles with 33 yards on eight carries while Dailey totaled 84 yards and one touchdown through the air.

Grand Rapids Catholic Central was led by Williams with 89 yards and three touchdowns on six catches. Hollern totaled 115 yards rushing on nine carries while Rellinger had 91 yards on 13 carries. Silveri was 11-of-12 passing for 158 yards and five touchdowns.

Oakridge finished the season with a 7-3 record, and will have a bit of rebuilding to do next season after losing 12 seniors to graduation. But overall, Harger and his staff and players are glad they were able to finish their season on the field.

“They got to prepare for this and be active in their end to the season,” Harger said about his players. “They got to go out with a football game. We as a staff can’t give enough kudos to these kids for coming back.”

Oakridge senior Shaw Raymond goes to tie up the GRCC receiver down low while No. 33 Br;ayden Rhanor goes up high. Photo/Michael Banka

Jacob Danicek looks back to see the pass get tipped by the GRCC defender. Photo/Michael Banka

Brenden Raymond rushes the ball up the middle for Oakridge. Photo/Michael Banka

Oakridge’s No. 14 Matt Danicek takes a snap next to Brenden Raymond. Photo/Michael Banka

Corey Vanderputte runs the ball up the sideline for Oakridge. Photo/Michael Banka