DETROIT – The Montague football team was dominant all season – an unusually long season, which lasted from September through January, and included a five-week pause during the playoffs.

So it was only fitting that the Wildcats continued that trend on Friday in the biggest game of the season with a 40-14 throttling of Clinton in the Division 6 state finals at Ford Field in Detroit.

The championship was the culmination of a three-year mission for Montague. Two seasons ago the Wildcats made it to the state finals but lost to Jackson Lumen Christi. Last season they made the semifinals but lost to Maple City Glen Lake in overtime. 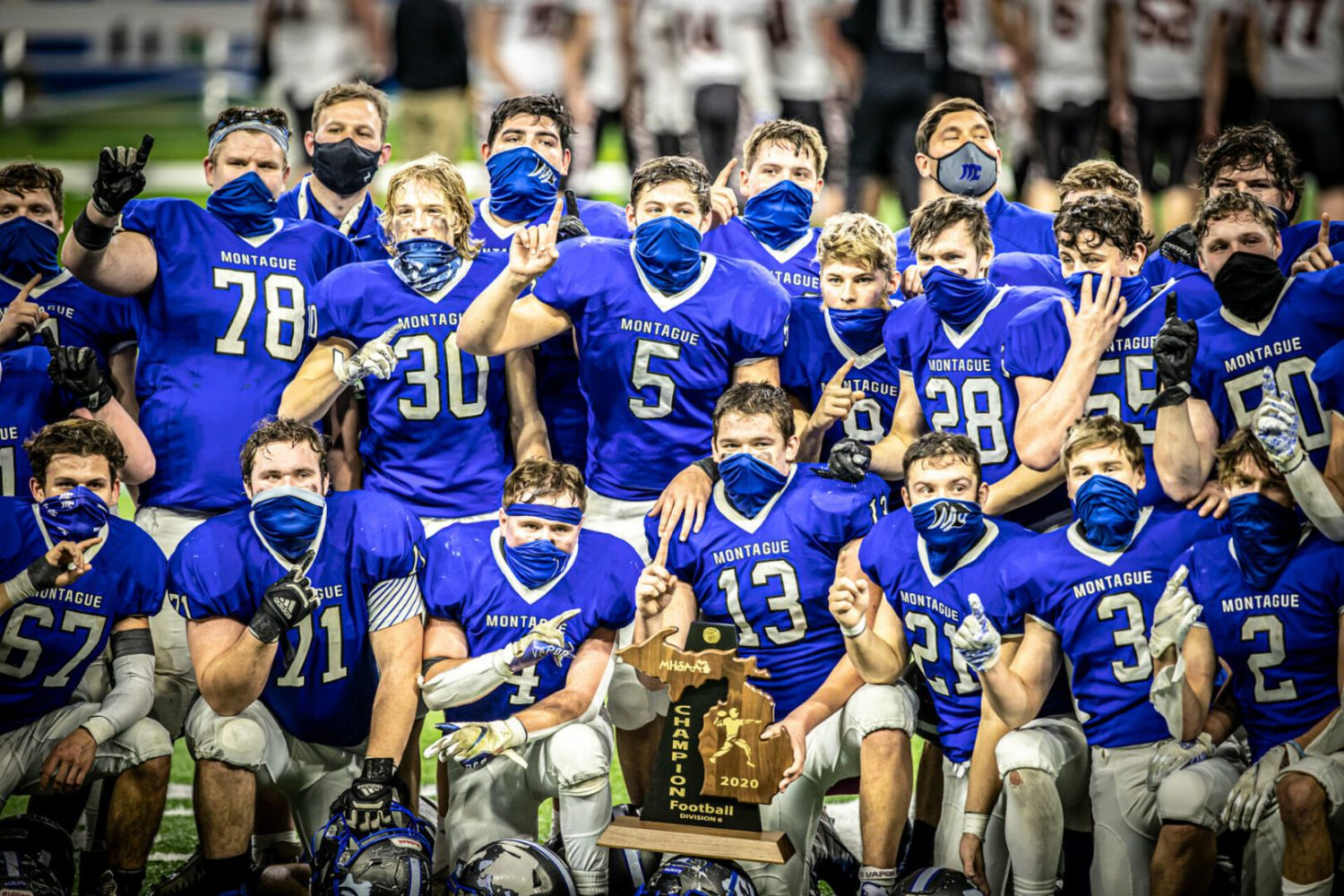 This time nobody was standing in the Wildcats’ way, and they realized their ultimate team goal.

“It can’t finish any better than that,” said veteran Montague Coach Pat Collins, who now has three state titles after leading the Wildcats to championships in 2008 and 2009. “It’s been a phenomenal run. Pinch me. I just can’t believe it. It’s amazing.”

While the final margin of victory was impressive for the Wildcats, most of it came in a big second half. Montague held only a narrow 19-14 lead at halftime, before outscoring Clinton 21-0 in the second half.

Clinton had 211 total years in the first half, but only 147 in the third and fourth quarters, when the Wildcats clamped down defensively.

Friday marked the sixth time in the 2020-2021 season that Montague held an opponent scoreless in the second half.

“Our staff is phenomenal,” said Colilns about his assistant coaches’ ability to adjust defensively at halftime. “But it’s really about the seniors and their heart in coming out in the second half. I thought our kids dug down deep and made some incredible plays in the second half. I’m really proud of them.”

While the second half made the score look one-sided, the game began as much more of a back-and-forth affair, and Clinton seemed to have a chance to win. 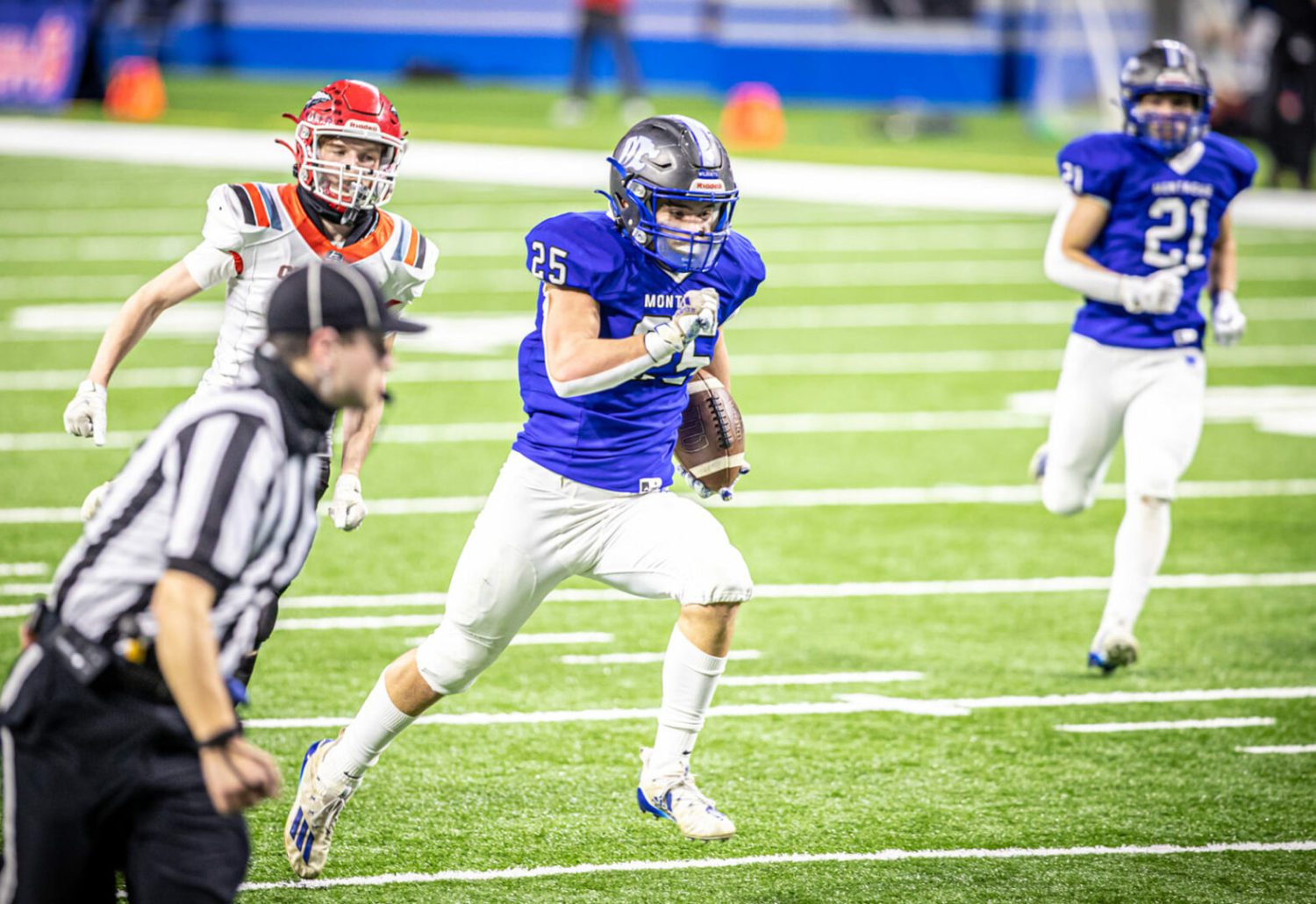 On the first drive of the game, Montague drove 52 yards over 13 plays while converting on fourth down twice. The Wildcats took a 6-0 lead after senior quarterback Drew Collins found fellow senior Sam Smith for a nine-yard touchdown pass.

On the ensuing Wildcat possession, Collins found a streaking Smith for a 44-yard touchdown completion, putting Montague back in the lead, 13-7, with 3:16 left in the opening quarter.

In the second quarter, Clinton jumped ahead 14-13 with a 19-play, 80-yard drive which took an amazing 10:56 off the clock. The drive was capped when Brayden Lehman scored on a two-yard plunge.

But just three plays later Montague junior Dylan Everett punched in a two-yard rush to give the Wildcats a 19-14 lead with 3:14 remaining, and that was the score at halftime.

The second half was all Montague.

The Wildcats wasted no time taking control, going 52 yards on three plays for a touchdown.  The drive was capped off by the third scoring connection between Collins and Smith, this time from 26 yards out. That gave Montague a 26-14 lead with 6:56 remaining in the third quarter. 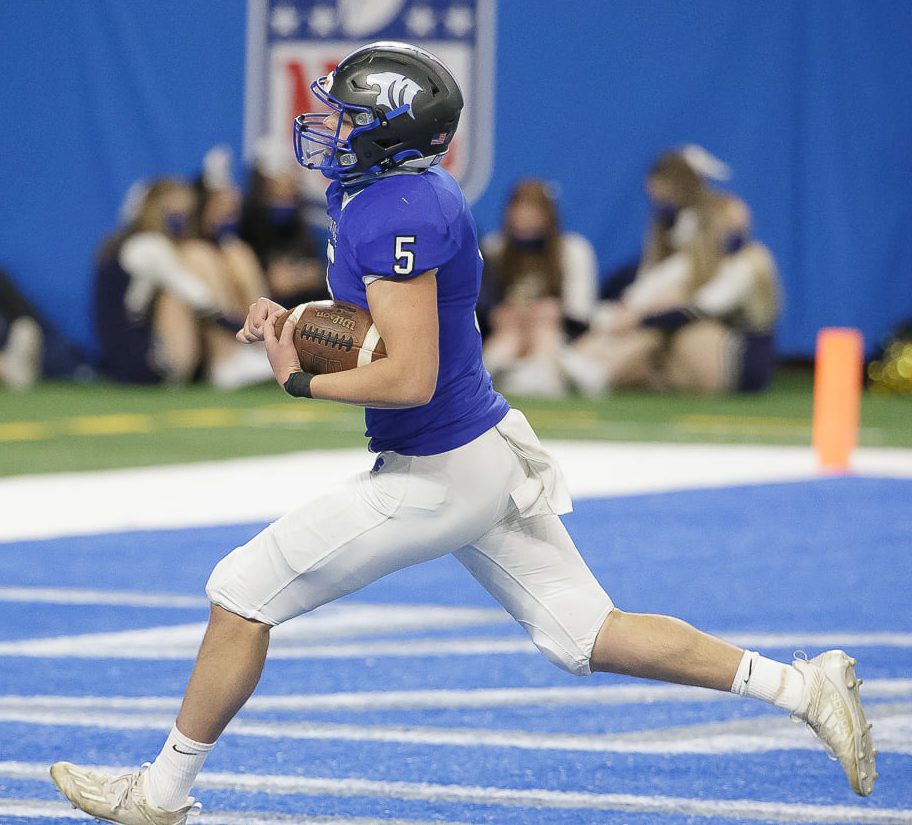 “It was my last senior game,” said Smith about catching three touchdown passes in his final game of his high school football. “So I had to put it all on the line for my team and community.”

On the next Clinton drive, Montague senior Trey Mikkelsen intercepted a pass at the Wildcat 45.  Just four plays later, Collins scored from nine yards out to give Montague a 33-14 lead.

Collins capped off the scoring with a 23-yard touchdown run with 10:56 remaining. Clinton, primarily a running team, lacked the passing game to mount any sort of late comeback.

Collins completed 15 of 19 passes for 244 yards and three touchdowns. He also had 51 yards and two scores on eight carries.

Drew Collins, the son of Coach Collins, has now done something his dad could not do in his high school career. Pat Collins was the Wildcat QB in 1993 when Montague lost in the state finals.

But after Friday’s game, Drew was quick to point out that his dad has two prior state titles as a coach.

“I’m at one and he’s at three,” the quarterback said. “Maybe later in life, I’ll be able to change that. We’ll see.”

On the ground, Everett contributed 52 yards and one touchdown on nine carries.

Defensively, Izac Jarka and Colton Blankstrom each had eight tackles while Mikkelsen added seven tackles and his interception. 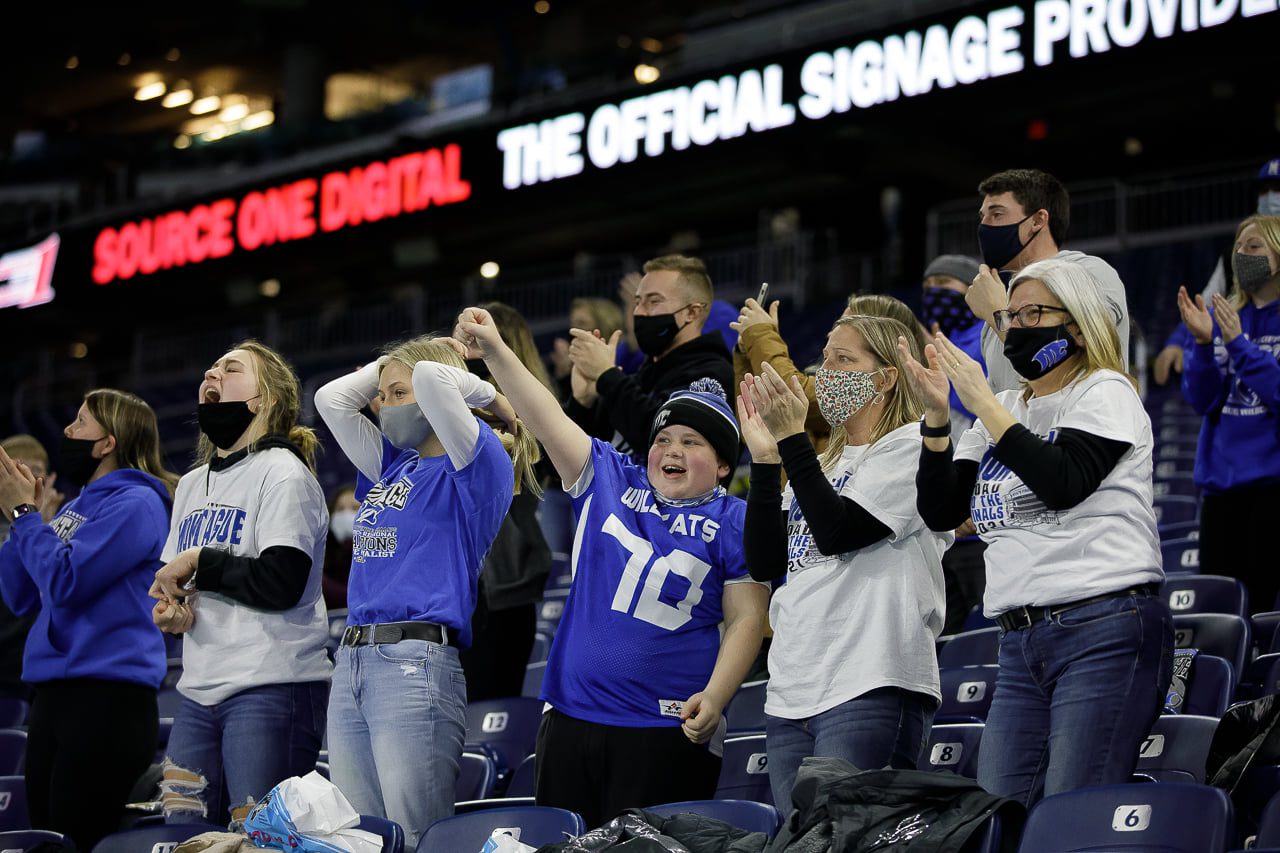 Montague finished the state championship season with a 12-0 record, the first undefeated campaign for the Wildcats since their 2009 championship year.

The Wildcats will send off 10 seniors as state champions.

“I think all the coaches feel like they’re all our sons,” said Coach Collins about the closeness of his staff and the players. “We treat them all the same. This is special because we’re tight.

“We’ve had a seven month season, and in all that time you go through some adversity, then to win a state title. I don’t know how much of a stronger brother you can have than that. These guys will talk about this forever. It was awesome.”

Sam Smith gets ready to run into the end zone for Montague. Photo/Randy Riksen

No. 67 David Dobson goes in for the tackle with No. 16 Chase Gowell on the corner and No. 6 Rodney Brassfield trailing. Photo/Randy Riksen

Owen Petersen gets ready to haul in a big reception for Montague. Photo/Randy Riksen

Drew Collins and No. 21 Tugg Nichols celebrate after a touchdown. Photo/Tim Reilly

Montague celebrates after the last seconds tick off the clock for the state championship. Photo/Randy Riksen