NORTON SHORES – Back in 2014, Coach Matt Koziak’s Mona Shores Sailors were babes in the woods when it came to the state finals.

The football program had been a loser for years, failing to make the state playoffs a single time until 2013, when the team finally got the six wins necessary to qualify for the postseason.

One year later the Sailors got hot, won eight of nine games during the regular season, and found themselves in the 2014 Division 2 state finals after pulling out a last-minute 25-24 victory over Farmington Hills Harrison in the semifinals. 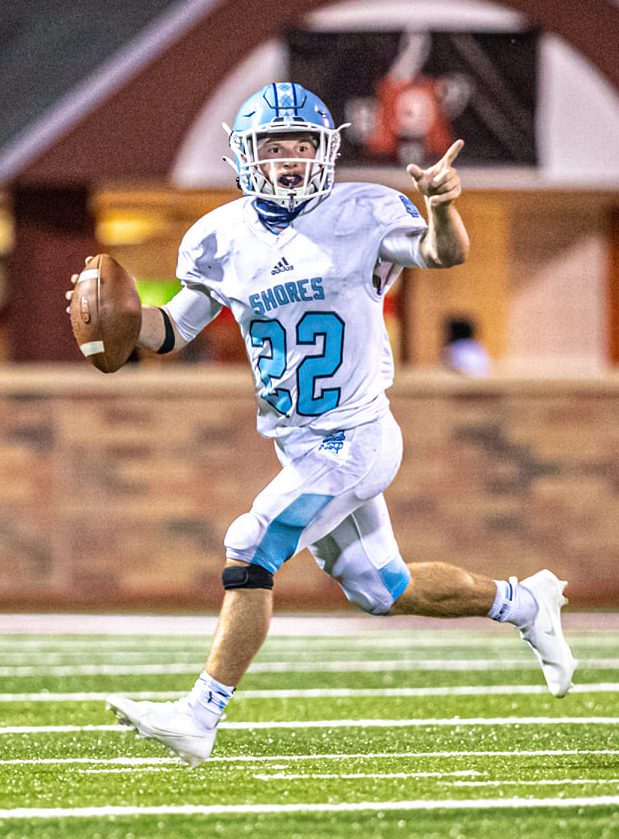 Their opponent in the finals was Warren De La Salle, a team very familiar with the state playoffs. The Pilots had made the postseason in seven of the eight previous years, and had been to the finals in 2006 and 2008, losing to Muskegon each time.

The Sailors went into the game with two key players injured, including starting quarterback Tyree Jackson, and predictably lost 44-8.

“That’s something that sticks with you forever,” Coach Koziak said about taking his team to the finals for the first time. “We had just beaten Harrison on a two-point conversion to get into the game, and it was a huge win, but the finals were unchartered territory for us. We were obviously happy to be there, and had the intention of winning, but it was new territory.”

In 2018 the Sailors returned to the finals, after two seasons of being eliminated in districts and one year of not making the playoffs at all. They posted an impressive 8-1 regular season record, and had several years of success under their belts this time around.

Again they played De La Salle, which was defending its 2017 state title, and while the game was a lot closer, Mona Shores again lost, 29-16.

“That was a back-and-forth game,” the coach said. “It was tied a few times. That was a little different (than the first time in the finals). We had been there before, we had a great senior class, but we just came up short.”

Of course the Sailors finally hit pay dirt in 2019, when they posted a 7-2 record in the regular season, with an ugly 53-0 loss to Muskegon, but got hot in the playoffs. Led by backup quarterback Brady Rose, they rallied for an amazing 57-56 overtime victory over Walled Lake Western in the state semifinals, then upset favorite Detroit Martin Luther King in the finals at Ford Field, 35-26.

The Sailors were finally state champions, and officially on the map as a legitimate state power. 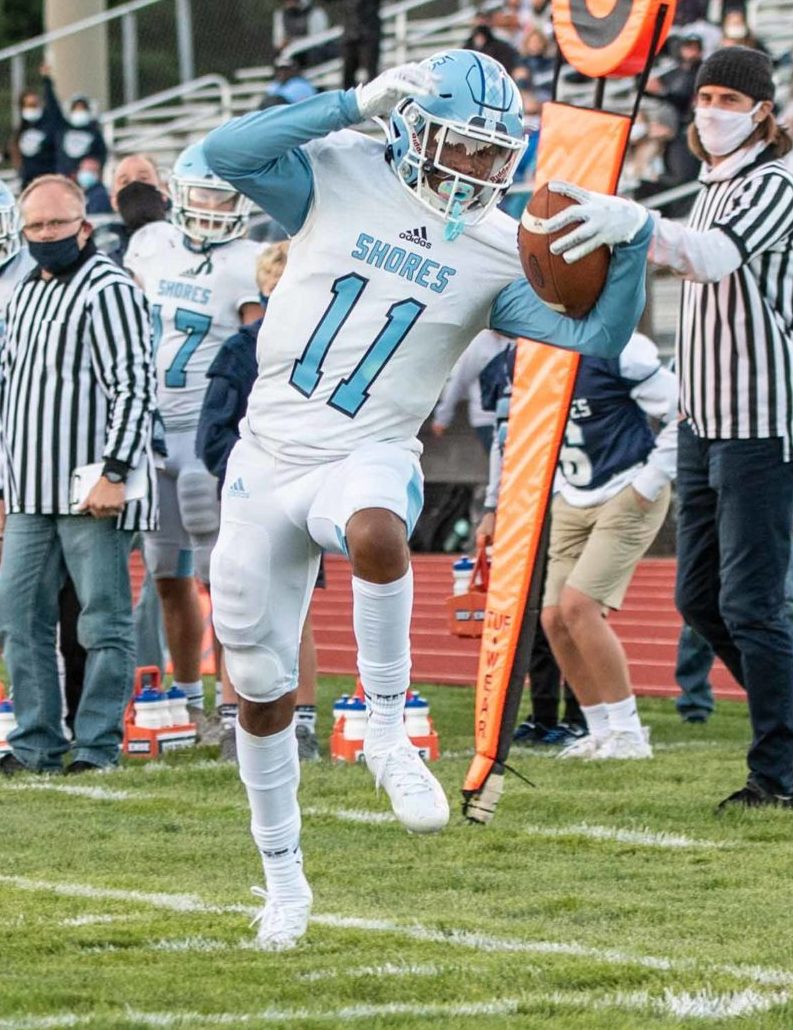 Now they will return to Ford Field on Friday to defend their title against – you guessed it – Warren De La Salle. But this time the shoe is on the other foot, because the Sailors are the reigning champs, and the mentality is totally different. Many of the Mona Shores seniors have been to the finals for three straight years, they were all there last year, and they know the routine and have a ton of confidence.

“Going into last year’s game, we were 0-2 in the finals, and to win it last year was a first,” Koziak said. “We have a lot of seniors who played in that game last year. It’s totally different from back in 2014.”

The Sailors and De La Salle Pilots have had very different types of seasons in 2020, which of course spilled into 2021 due to delays caused by the pandemic.

Mona Shores was 6-0 during the regular season, with feature victories over Muskegon (21-14), and Detroit King in a rematch of the 2019 championship game, 35-21. They rolled over their other four opponents by wide margins.

But the playoffs have been a struggle – albeit an exciting one – for the Sailors. After posting an easy win in the first round over Wyoming, Mona Shores had to go down to the wire to pull out last-minute victories over Forest Hills Central (28-25), Caledonia (43-35), East Lansing (24-21), and last Saturday Traverse City Central in the semifinals (43-30).

While that last score may not seem particularly close, Mona Shores had to come back after trailing by 10 points at halftime.

De La Salle has taken the opposite route to the finals.

The 2019 season was a nightmare for the Pilots, who were engulfed in a team hazing scandal that led to a change in coaches, and prompted the school to pull the team out of the playoffs.

This season the Pilots struggled badly during the regular season, posting a 2-4 record. In years past that sort of mark would not have gotten the team into the playoffs, but this year every team in the state was allowed in the postseason tournament. 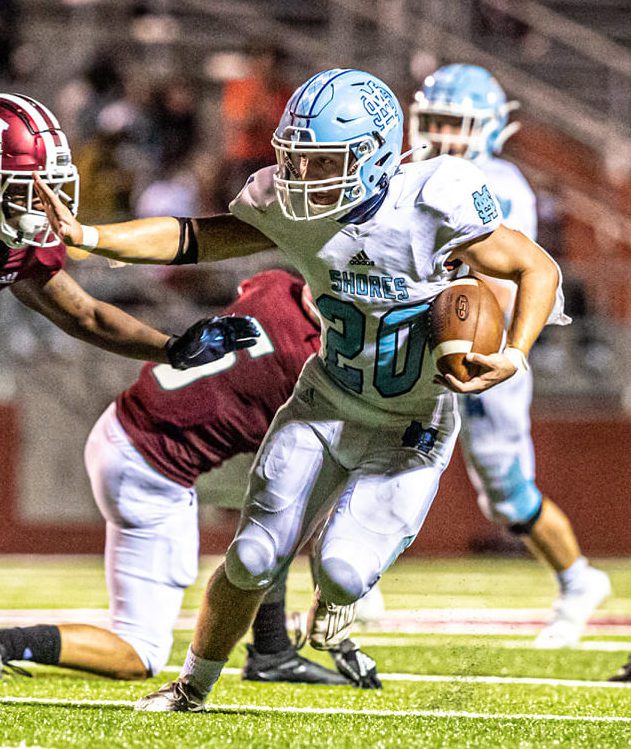 For the second straight week, the Sailors will be facing off against a head coach with West Michigan connections. Pilot Coach Dan Rohn coached at Fremont and Grand Rapids West Catholic before landing at De La Salle.

When asked what he’s learned about De La Salle over the years, Koziak said, “They are tough, tough kids and they play hard. This will actually be their third coach we’ve played against since 2014, but one thing that doesn’t seem to change is how hard they play.”

When asked if there was anybody on the Pilot roster he’s most concerned about, Koziak said, “Their number 30. He can do it all. He’s a running back and safety, and he’s really, really good – their Brady Rose, so to speak.”

That No. 30 is senior Brett Stanley, who is apparently the workhorse of the De La Salle offense. In the second-round playoff game against Lakeview, for instance, he piled up 208 all-purpose yards, with a 90-yard kickoff return TD, rushed for three touchdowns and had an interception.

Last Saturday in the semifinals, he scored two touchdowns, had two called back due to holding penalties, scored on a two-point conversion and totaled 148 yards rushing. One of his TDs was the game-winner in overtime.

Of course Mona Shores will counter with Rose, a senior quarterback/safety, who has had such a great season that he seems like a strong contender for the state’s Mr. Football award.

On the ground he has rushed for 1,314 yards, for an average of 8.48 yards per carry, and has scored 22 touchdowns. He has completed 57 of 93 passes for 958 yards with 11 touchdowns and three interceptions. He also leads the defense in tackles with 66 and interceptions with six, and has scored three defensive TDs. 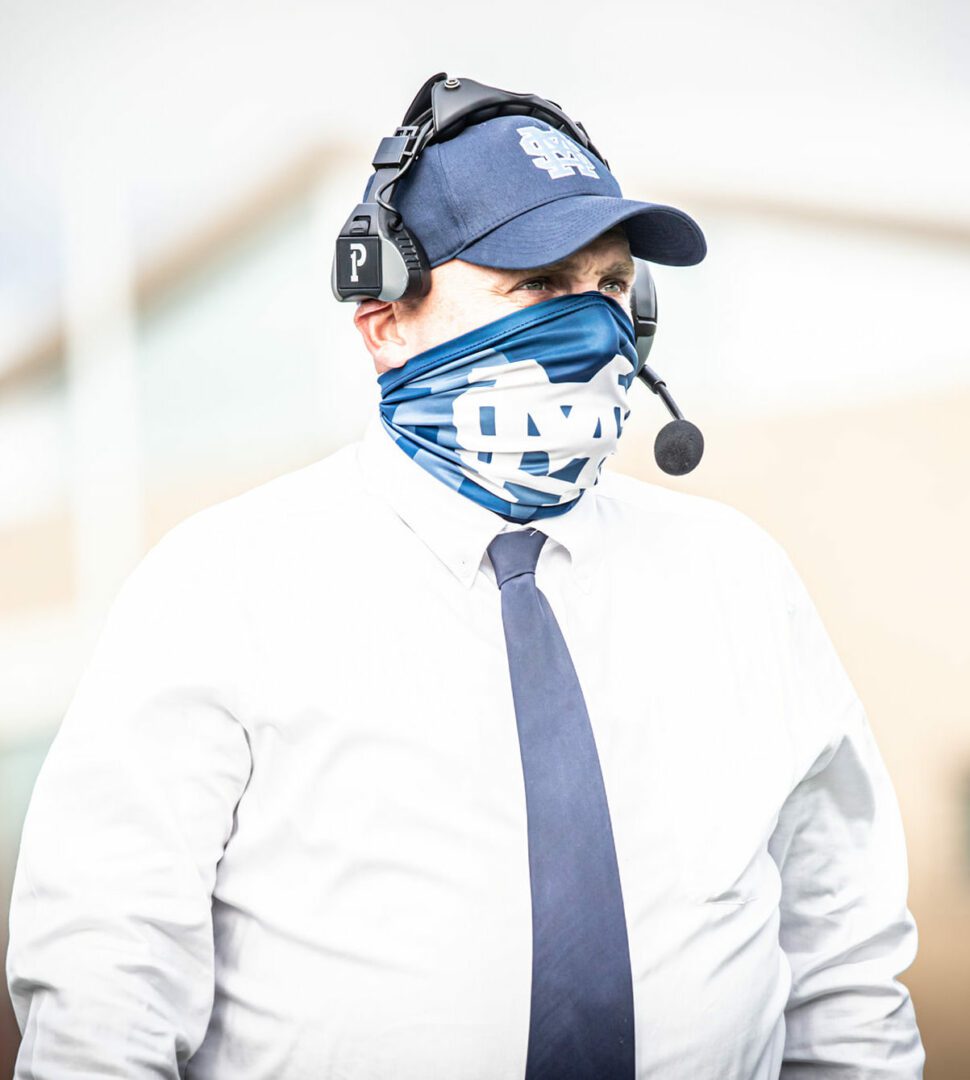 Rose has been the catalyst in every one of Mona Shores’ four heart-stopping wins in the playoffs.

Against Forest Hills Central, he rushed for 255 yards and scored three touchdowns, including the one that put the Sailors in the lead for good with about five minutes left in the fourth quarter. Against Caledonia, he had a 13-yard touchdown run late in the game to break a 35-35 tie and give the Sailors the win.

Against East Lansing, he rushed for 204 yards and two touchdowns, covering 82 and 27 yards, respectively.

Against Traverse City Central last Saturday, Rose was really magic. The Sailors trailed by 10 points at halftime, then scored 29 unanswered points in the second half to get the win. Rose led the comeback with a pick-six interception, a touchdown pass to Gary Humphrey, another interception, then two more touchdown runs. He finished with 187 yards rushing, three touchdowns and two interceptions.

Now Rose is down to the last game of his varsity career, and Koziak said it’s a “bittersweet” feeling.

“He’s done so much for our program,” Koziak said. “We’re going to miss the heck out of him. There’s no doubt about it – having him as our trigger man on offense and safety on defense is a big advantage. It gives the other players and coaches confidence when he’s on the field.”

When asked what makes Rose tick, Koziak said, “If I could figure that out, I would bottle it. He just has a knack for being around the ball all the time, and if we need a big play, he finds a way to come up with it.”

Regardless of how the game turns out on Saturday, Koziak, his assistants and the players are overjoyed that they actually have a chance to finish the season and defend their state title. When the playoffs were postponed in mid-November after the district finals due to a COVID spike, many coaches, including Koziak, wondered if they would start up again.

“With all of the ups and down and emotional letdowns this season, we get to end it on our terms,” Koziak said. “The seniors get to go out the way they want to. I’m so happy these guys got the chance to finish. Regardless of it being January, they will finish their careers in Mona Shores football helmets at Ford Field.”