DETROIT – Early in Friday’s Division 2 state championship game, it looked like Mona Shores might have an easy time defending its 2019 title.

The Sailors took the opening kickoff and marched downfield for a quick touchdown, and nursed a 13-point lead at halftime.

But as Mona Shores fans know all too well, it wouldn’t be a Sailor playoff game without some exciting drama, and it came late in the game, in a battle of critical fourth-down situations. 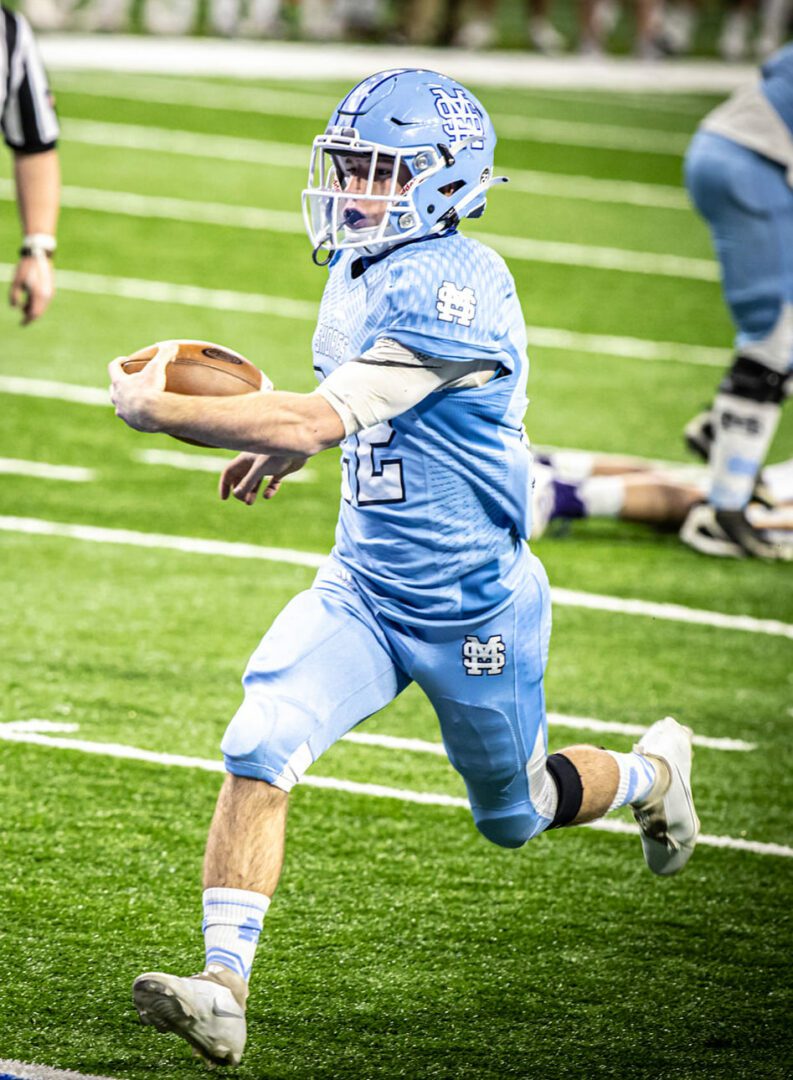 Warren De La Salle fought back to within six points and faced a fourth-and-3 at its own 39-yard line with about five minutes left. The Pilots went for the first down, but their pass was incomplete, giving the Sailors the ball.

Five plays later, Mona Shores faced a fourth-and-7 at the De La Salle 25 with 3:23 remaining. Senior quarterback Brady Rose launched a pass to Elijah Farnum at the goal line, it was incomplete, but the De La Salle defender was called for pass interference, giving the drive new life.

Rose ripped off runs of five and four yards, then burst into the end zone from four yards out, giving the Sailors the padding they needed. De La Salle scored a late touchdown, but Mona Shores covered the following onside kick and walked off with its second straight Division 2 state title with a 25-19 victory at Detroit’s Ford Field.

The win broke the Sailors’ two-game losing streak to De La Salle in the title game. The Pilots beat Mona Shores in 2014 and 2018.

“We jumped up on them early and they came right back after halftime,” said Mona Shores Coach Matt Koziak. “I’m proud of how our kids responded. They had us on our heels a little bit.

“Being up 13-7, Brady makes a big run and it got momentum kind of swinging back our way. Then Keondre punches it in, but De La Salle battled back and we have to recover an onside kick to win a state championship.”

The Sailors finished with a perfect 12-0 record in a crazy stop-and-start season that began three weeks late, was postponed for five weeks after the third round of the playoffs, and finished in January for the first time in the history of Michigan high school football. 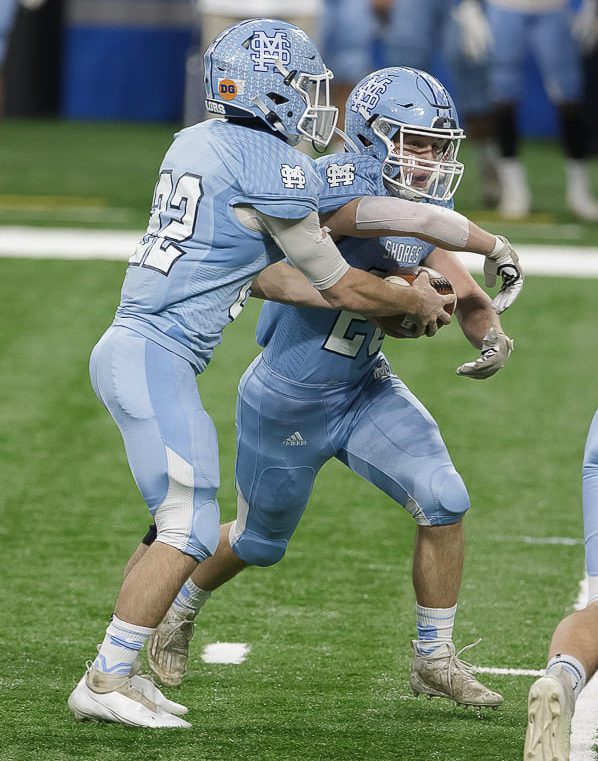 “I’m just proud of our young men,” Koziak said. “They’ve been through the ropes. They’ve been on an emotional roller coaster and we asked them to come back after weeks off. Many teams did that and it’s a credit to the young people fighting till the end. We will probably be the only D2 state champs in the month of January in the history of football.”

The Sailors came out on a strong note, taking the opening kickoff and driving 72 yards on seven plays for the game’s first score, which came on a 12-yard run by Rose. The extra point effort failed, and the Sailors had a 6-0 lead with 9:30 left in the first quarter.

But offenses stalled a bit after that.

Then the Sailors got the ball with 7:24 left in the second quarter and started to move downfield again. They drove 66 yards on 13 plays, taking 6:08 off the clock, and scored when Elijah Johnson rambled into the end zone from nine yards out.

De La Salle fought back right away in the third quarter, taking the kickoff and rolling 62 yards on nine plays for a touchdown. The score came on a four-yard run by senior quarterback JC Ford, who took over under center in the second half, and the extra point made the score 13-7 nearly three minutes into the half. 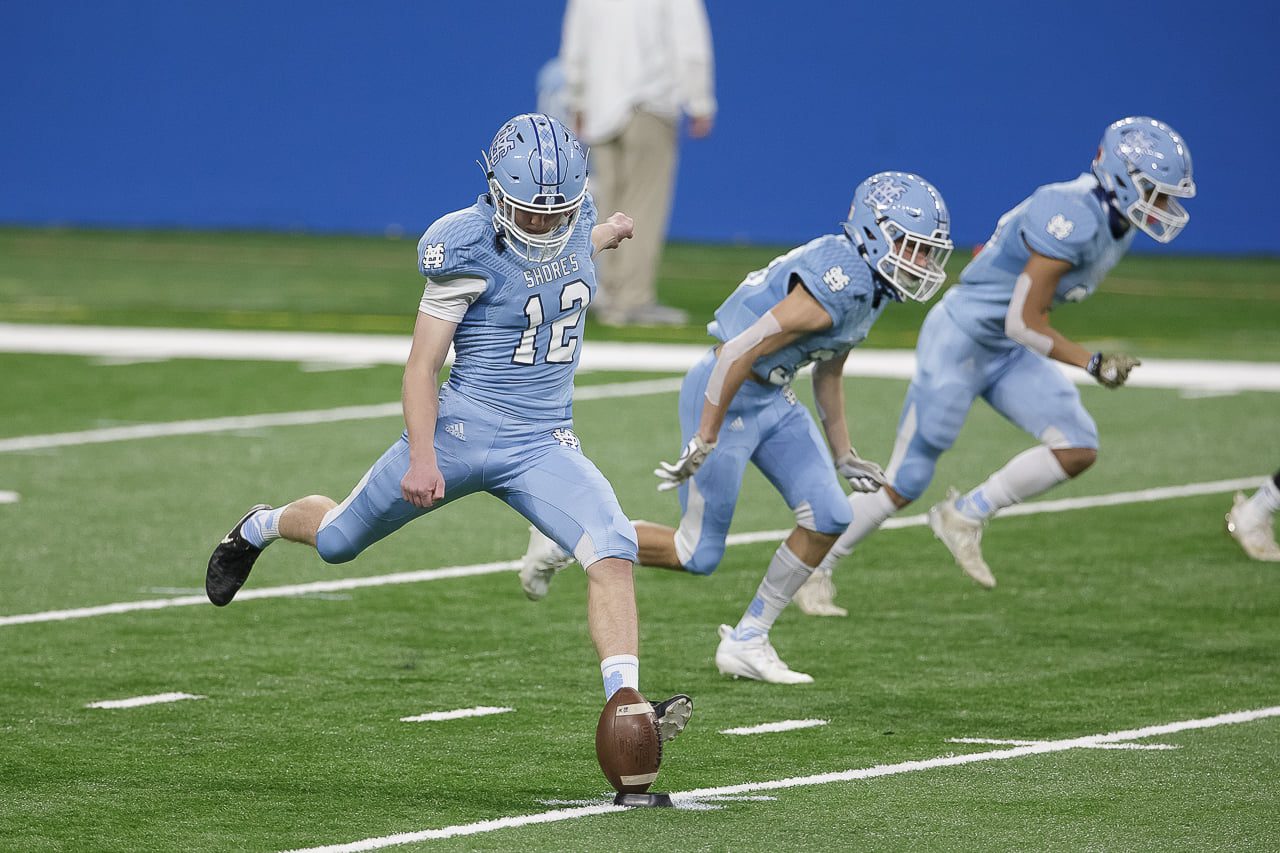 The Sailors then drove to the De La Salle 32 before a Rose pass was picked off by Diandre Dandridge.

The two teams traded punts until early in the fourth quarter, when the Pilots drove to the Mona Shores 33 and faced a fourth-and-3, but failed to convert.

The Sailors took over at their own 31, still clinging to the six-point lead with 11:53 left in the fourth quarter. The drive suffered a blow when Mona Shores was called for a chop block personal foul on the second play from scrimmage, a 15-yard penalty that left the Sailors with a second-and-19 at their own 22.

That’s when Rose, the state’s Associated Press Player of the Year, had his biggest play of the day, dashing up the left sideline, breaking tackles and gaining 65 yards to the De La Salle 13.

Four plays later Rose pitched out to Keondre Pierce, who scored from 10 yards out with 9:25 remaining. The two-point conversion attempt failed, leaving Mona Shores with a 19-7 lead.

“Momentum was probably switching their way,” Rose said. “For us to get that long run and get in the red zone kind of switched momentum for us. Then punching it in to finish the drive, we just had to hold the lead.”

De La Salle struck back again on its next possession when Ford broke loose up the middle for a 52-yard touchdown run. Rose blocked the PAT attempt for the Sailors, who were suddenly clinging to another six-point lead, 19-13, with 7:55 left. 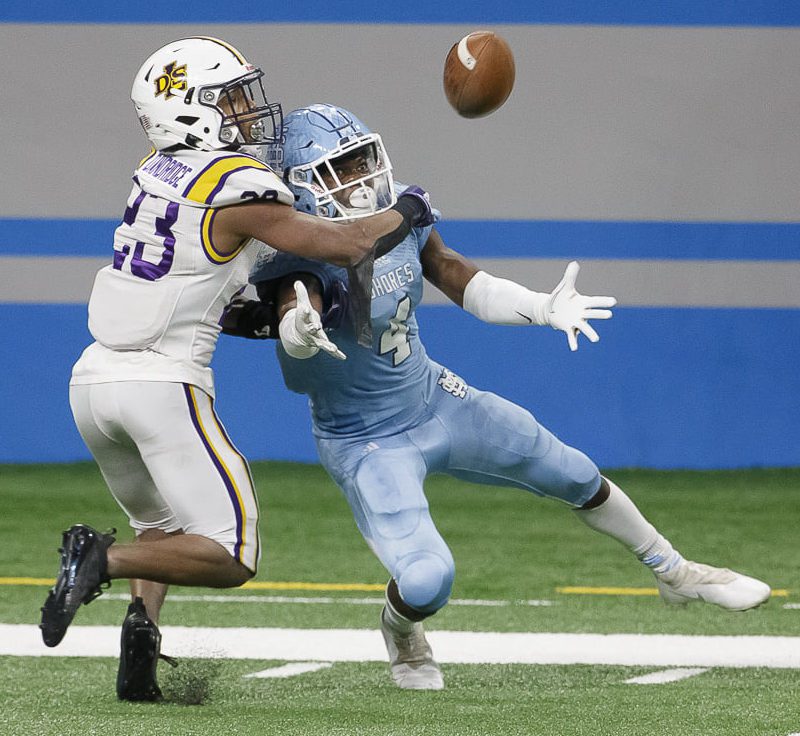 Mona Shores punted on its next possession, and De La Salle made a risky move by going for it on fourth down at its own 39. The incomplete pass gave the ball back to the Sailors, and Rose scored the four-yard TD with 1:47 left.

“Our defense was incredible, especially on big fourth down plays,” Koziak said. “They made play after play today, and we were able to get the ball back.”

The Pilots added a touchdown from Ford on a four-yard run with 16 seconds left. They tried a desperation onside kick, but Rose picked it up and ran with it, ending the game.

Then the celebration began for Mona Shores, which lost the 2018 title game to De La Salle, won it last year over Detroit Martin Luther King, and made it two titles in a row for the first time on school history on Friday.

The Sailors won their latest title the hard way, capturing victories in their last five playoff games by tight margins in the closing minutes, or by coming from behind. Koziak said his senior class made those nervous games easier for him.

“I don’t ever like being in a tight spot, but Brady and our seniors are just a great class,” the coach said. “If you look at the last four playoff games, it comes down to the last play or possession. I don’t want to say they refuse to lose, but they just have no quit and never feel they’re out of the game.

“Sometimes I’m in panic mode and our seniors are like, ‘We’re good, we got you.’ It’s very comforting as a coach.”

Rose rushed for 154 yards on 22 carries with two touchdowns. Johnson had 76 yards on 14 carries and one touchdown.

Kyree Hamel led the Mona Shores defense with 11 tackles and one interception. Jeff Lenartowicz added nine tackles, Rose and Gary Humphrey each had eight and DJ Caviness had six.