MUSKEGON – The Muskegon Lumberjacks had many opportunities to put Green Bay away early with multiple power play chances on Saturday night, but kept coming up short.

But the Lumberjacks finally cashed in on their fifth try, resulting in the game-winning goal and an eventual 6-4 win over the Green Bay Gamblers at Mercy Health Arena. 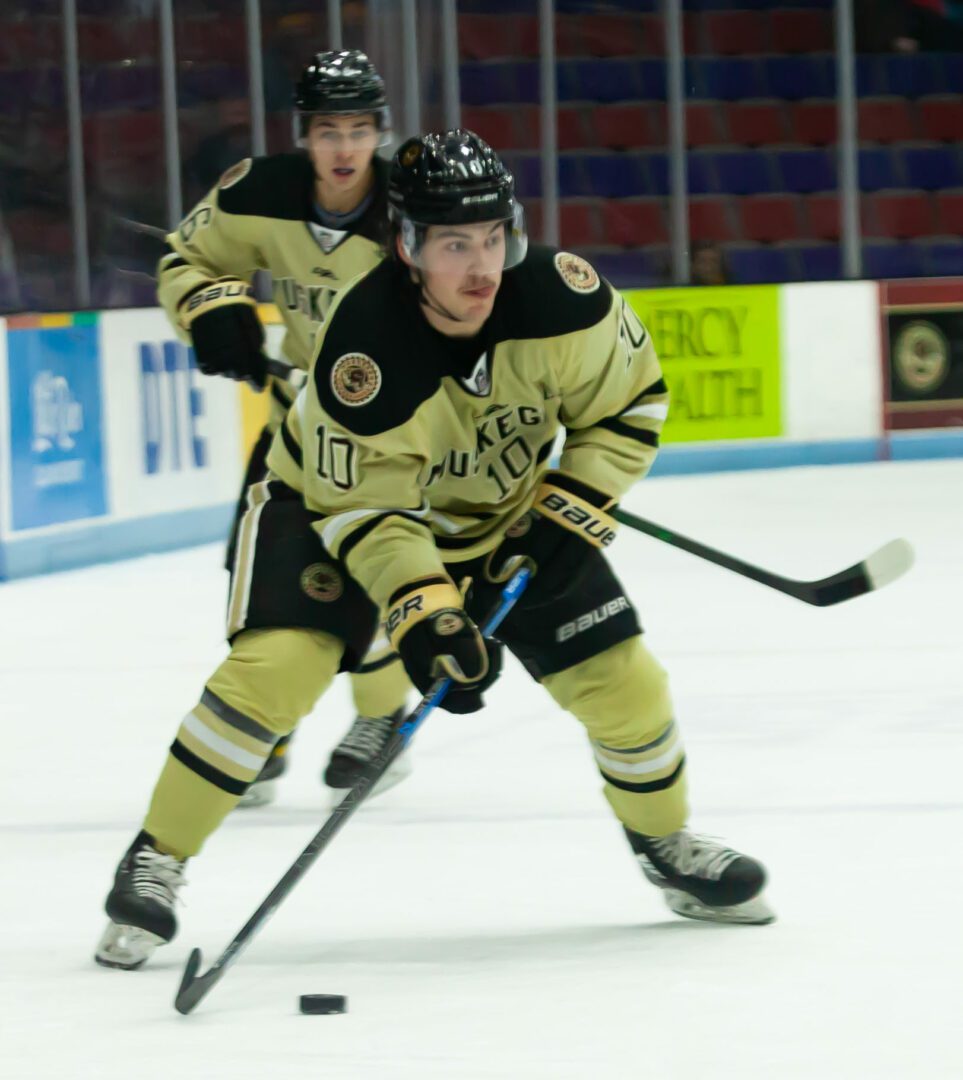 Jacob Guevin gets ready to make a move on the net for Muskegon. Photo/Jason Goorman

Muskegon won all three of its games this weekend, including both of its showdown games with Green By, and improved to  13-6-1 on the season. The Lumberjacks now have 27 points in the standings, good for second place in the USHL’s Eastern Conference.

The Lumberjacks are three points behind first place Chicago and three points ahead of the third place Gamblers.

Muskegon will travel to Plymouth, Michigan on Monday to face Team USA U-18 squad before hosting the Team USA U-17’s next Friday and Saturday night.

“To get two games from that team (the Gamblers) is huge,” said Lumberjacks Coach Mike Hamilton. “We have been chasing them and it was good to see us pull it together and have two solid nights in a row. That was playoff hockey right there.”

The Lumberjacks struggled early on with special teams, failing to score on their first four power play chances, while giving up two power play goals.

“We gave up two goals while shorthanded and we didn’t have the power play going,” said Hamilton. “Our power play was giving us negative energy, but a lot of hard work overcame it.” 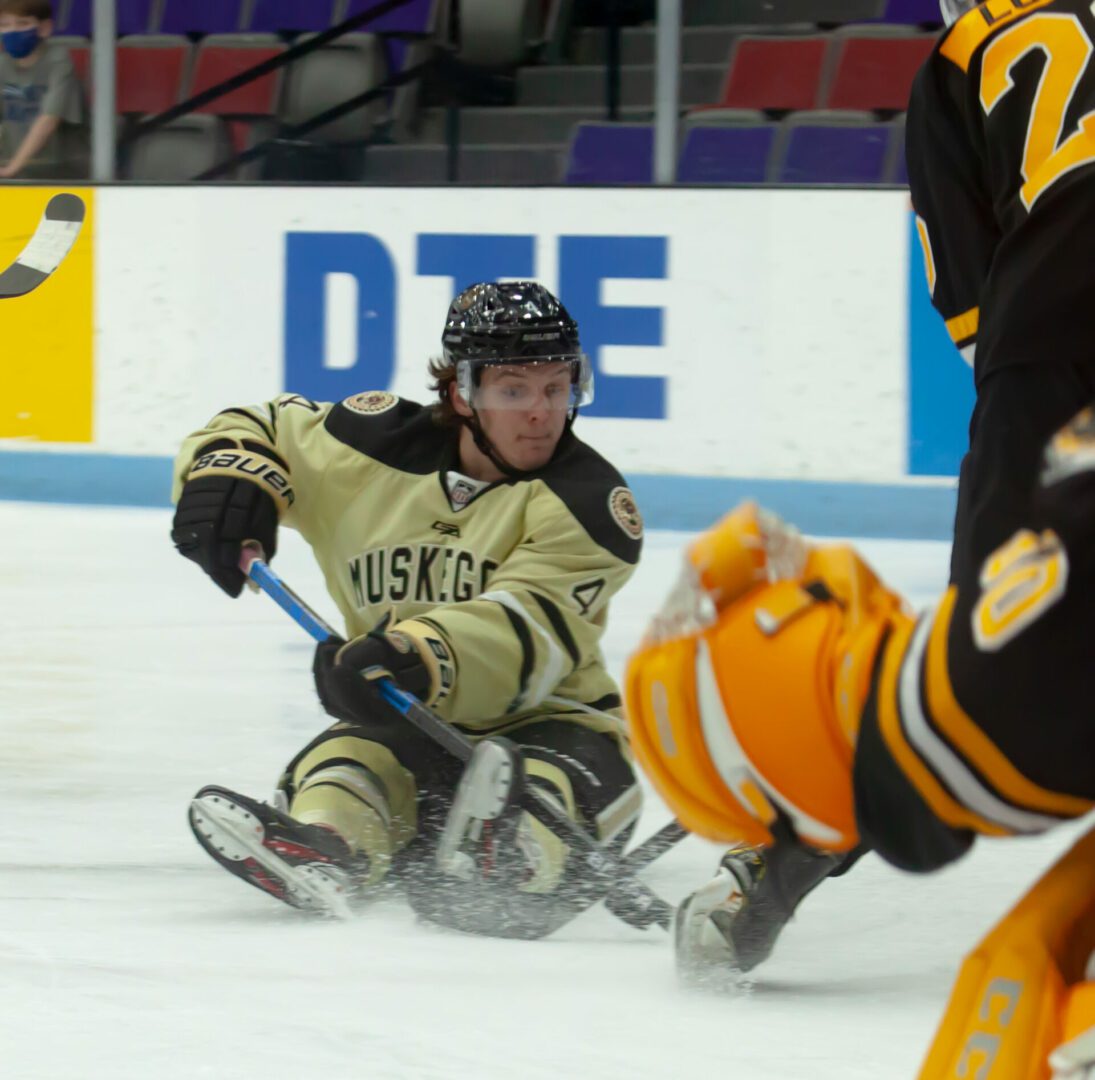 Davis Pennington slides on the ice in front of the Green Bay net. Photo/Jason Goorman

The Lumberjacks were led by Cameron Berg with a three-goal hat trick, while Jacob Guevin and Danil Gushchin each had a goal and an assist. Rhett Pitlick and Cristophe Tellier chipped in with two assists apiece.

“He puts the puck in the back of the net,” said Hamilton about Berg. “This guy has gone through a roller coaster in our league and was disappointed in not getting drafted in the NHL. He is using it the right way as fuel to make himself a better player.”

Berg now has 16 goals on the season, which is tied for second place in the USHL, one goal behind Chicago’s Matt Coronato.

“I have some good teammates that give me the puck,” said Berg. “I have just been giving it my all and it’s just great to be here.”

The teams exchanged goals five seconds apart in the opening minute of the contest.

The Gamblers scored 57 seconds in on a tally by Alex Nordstrom, then Muskegon’s Alex Gagne tied the game 1:02 into the contest with a goal on a shot from the center of the ice. 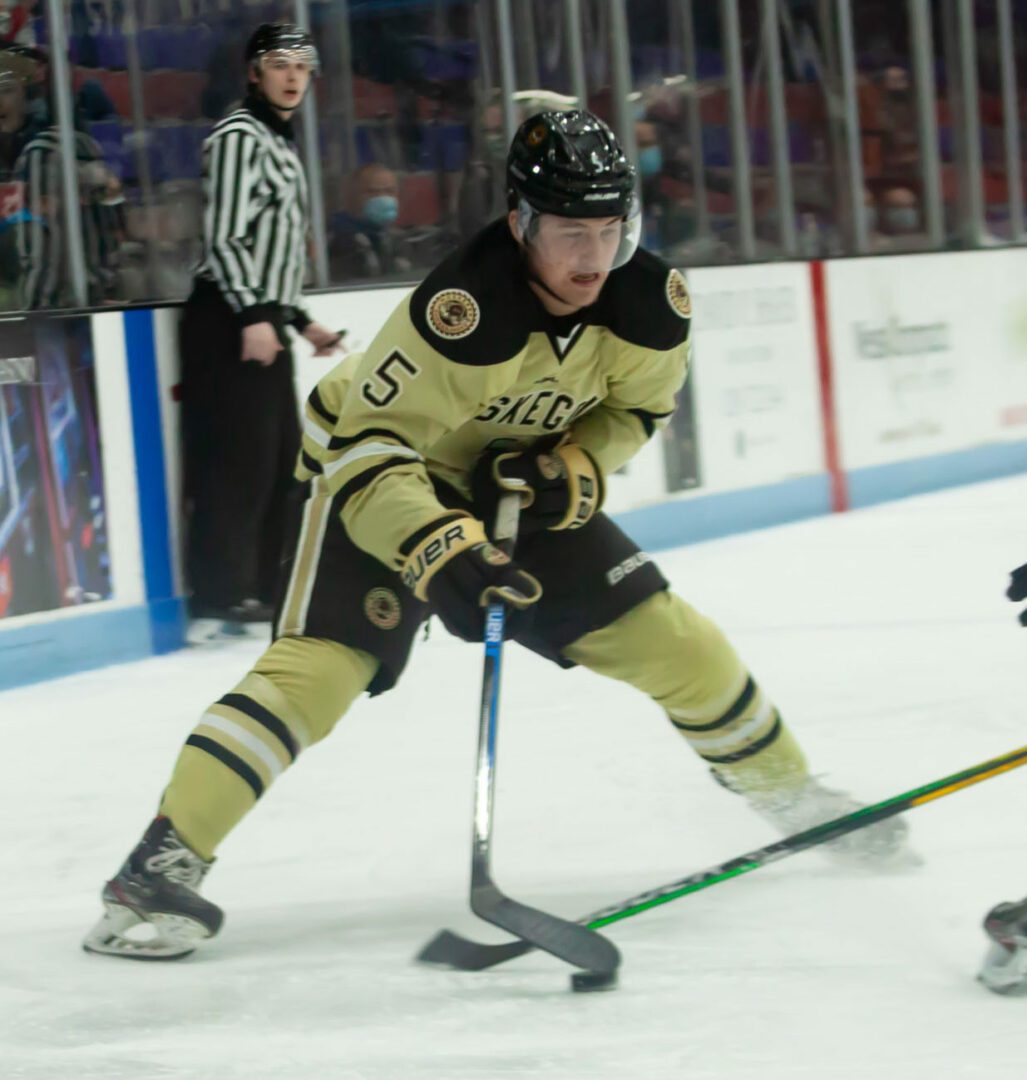 Gushchin gave Muskegon a 2-1 lead at the 8:59 mark of the first period, scoring his 50th career goal as a Lumberjack. He became just the fourth player to reach 50 goals for Muskegon in its 11 seasons in the USHL.

The Gamblers responded with a goal from Jesse Tucker at the 15:45 mark and Camden Thiesing on the power play at 18:03 to take a 3-2 lead.

The Lumberjacks tied the game 3-3 late in the opening stanza with a tally from Berg.

The Lumberjacks had chances during the second period to take the lead with three power plays, but failed to score, keeping the game tied 3-3 heading into the final period.

Muskegon had another chance to gain a lead early in the third but failed to score on its fourth power play of the game. 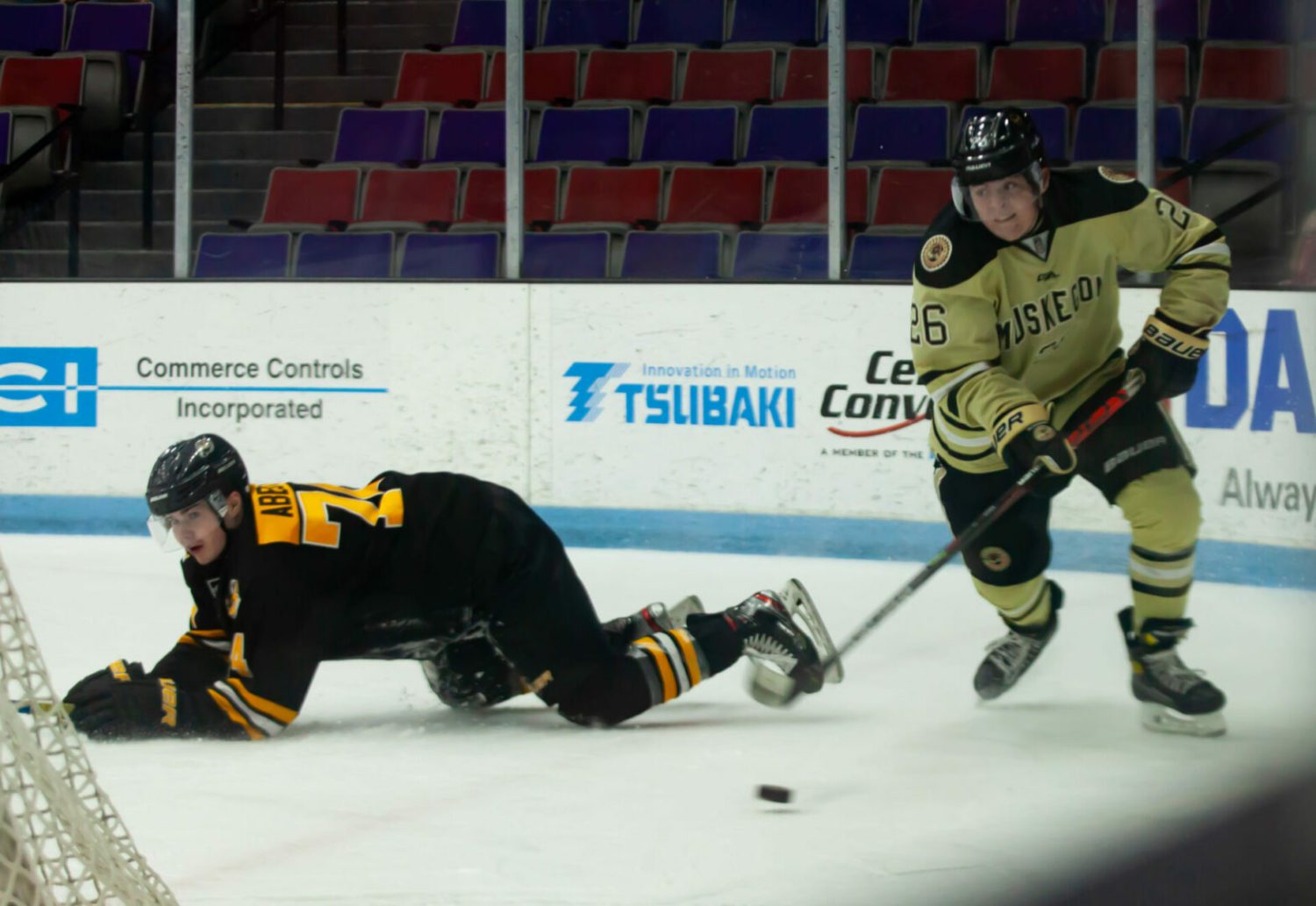 The Gamblers took advantage of their man advantage halfway through the third period, scoring on Thiesing’s second goal of the contest 10:09 into the final stanza.

The Lumberjacks tied the game 4-4 on Berg’s second tally of the contest at the 13:25 mark of the third period.

Muskegon then received its fifth power play after a too many men penalty on the Gamblers at the 15:40 mark of the third period.

Guevin scored on a shot from the blue line with 21 seconds left on the power play at the 17:19 mark of the third period to give the Lumberjacks a 5-4 advantage.

Berg put the game on ice with his third tally of the game on an empty net goal 18:45 into the third period.

The Lumberjacks outshot Green Bay by a 42-26 margin.