MUSKEGON – The short Rhett Pitlick era is over in Muskegon.

Pitlick, the talented forward who scored a lot of goals for the Lumberjacks in half a season in 2019-20 and the first half of 2020-21, was traded on Monday to the Tri-City Storm in exchange for forward Nick Portz.

The Lumberjacks had no plans to trade Pitlick, according to Coach Mike Hamilton. He requested a trade due to what he perceived as a lack of ice time, the coach said.

“We didn’t have an issue with Rhett,” Hamilton said. “He had requested a trade. It had a lot to do with minutes, stuff like that. He was a huge addition to our team last year. He was the main piece of that big trade, and helped us right the ship last season and gave us an opportunity to make the playoffs.

“This year he had a slower start. He was injured early and there was some frustration on his end. We tried to work through it, but at the end of the day our mission is to get players ready for college hockey. If he was unhappy, a new start is probably better for him. Tri-City picked up one heck of a hockey player.

“It was just a situation where he felt his time had run its course in Muskegon.”

The Jacks acquired Pitlick in November of 2019 from the Omaha Lancers, along with forward Cam Berg and defenseman Dylan Davies, in exchange for forward Luke Mobley, defenseman Nash Neinhuis and other considerations.

Fans were excited about the trade, largely because Pitlick is the younger brother of Rem Pitlick, who had an amazing 46 goals and 43 assists for the Lumberjacks in 2015-16. 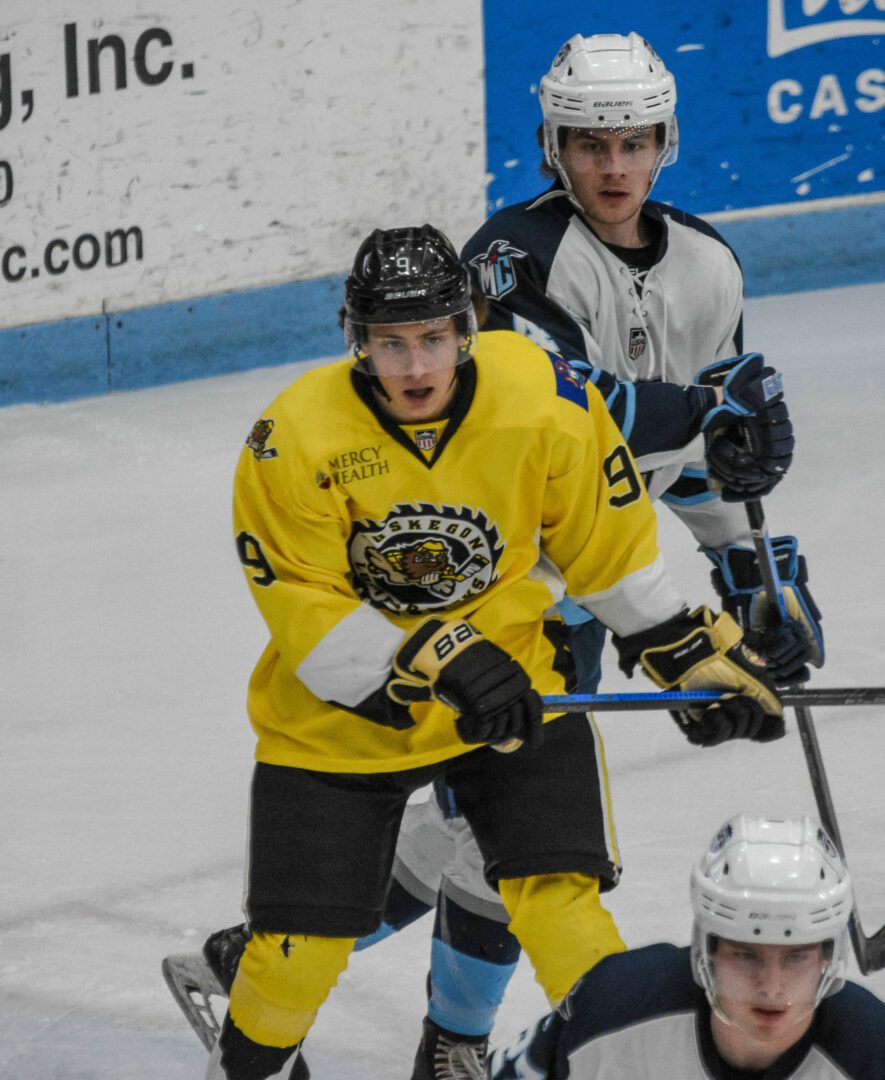 Rhett Pitlick gets in front of the Madison defense in a game last season. Photo/Mitchell Dixon MSD Photography

At the time of the trade, Steve Lowe, the Jacks’ president of hockey operations, called Rhett Pitlick “one of the most dynamic players in the United States Hockey League.”

Pitlick showed some real flashes of that talent during his time in Muskegon, totaling 13 goals and 18 assists for 31 points in the shortened 2019-20 season, and seven goals and seven assists in 17 games this season.

He had a hat trick on three unassisted goals in a victory over Dubuque on Dec. 29.

While the Jacks are sorry to see Pitlick leave, they are excited about Portz, who is also a proven goal scorer and a more physical player than Pitlick, according to Hamilton.

Portz, in his second season in the USHL, had 15 goals and 23 assists for Tri-City last season, and had five goals and five assists so far this season.

“He puts up points, and he’s a defensive-minded hockey player,” Hamilton said. “That conference (the USHL Western Conference) plays a really different style of hockey. The fact that he was averaging a point a game is huge, because they are not as offensive-minded out there.

“We are really excited. This addressed some of our needs. By adding (rugged forward) Brad Marek, and now Portz, we’ve gained two solid two-way hockey players.”

In the team’s press release, Lowe described Portz as a team-first type of player. Lowe is a former team official with Tri-City, and was responsible for bringing Portz to the Storm.

“He is a tremendous person and player,” Lowe was quoted as saying. “He puts the locker room first and his teammates before himself. Nick will not only make an impact on the ice, but also in the community.”

Portz will be on the ice for the Lumberjacks in their two games this weekend.

Last week at this time, the Lumberjacks were in third place in the USHL’s Eastern Conference, two points behind second-place Green Bay. They had been chasing the Gamblers in the standings for weeks, but had failed to slip past them.

Today the Jacks (13-7-1) are in second place, three points ahead of the Gamblers, and only three behind the first-place Chicago Steel. They got the bump they were looking for in a three-game home sweep last weekend, with a 4-2 victory over Youngstown on Thursday, then a pair of wins over Green Bay, 4-1 on Friday and 6-4 on Saturday.

On Friday the Jacks’ penalty-killing unit, which had struggled for much of the season, killed off four short-handed situations during the second period, including a five-minute major penalty, when the game was tied 1-1. Muskegon scored three times during the third period to nail down the win.

On Saturday forward Cam Berg scored a hat trick in the victory. The Lumberjacks trailed twice by a goal, but kept battling back to get the win.

Second-year forward Danil Gushchin scored once for Muskegon on Saturday, and became just the fourth player to reach 50 career goals with the Jacks.

“Saturday night was a playoff atmosphere,” Hamilton said. “We were down a goal, and the guys started feeling a little sorry for themselves, but then I saw another response come out of them. It was encouraging to see their excitement. Those were probably the best three games we’ve played all season.”

The Jacks went on to lose 7-3 on the road to the elite Team USA Under-18 squad on Monday, and will host the USA Under-17 squad on Friday and Saturday at Mercy Health Arena.

The Lumberjacks believe their makeover in the goalkeeping department may be complete.

Last week the Jacks released Christian Stoever, who started the season as the No. 1 goalie, but recently had been playing much less that Jan Skorpik, who has inherited the starting role.

Stoever struggled all season, posting a 3-1-1 record but having an inflated 5.28 goals against average. Nate Reid, who was recently acquired by the Jacks, will be the backup goalie and will continue to press Skorpik for playing time.

Stoever was picked up by Sioux Falls after his release in Muskegon.

“It was a really tough decision, but we knew in our minds that Skorpik was going to be a keeper for us,” Hamilton said. “He was playing really good hockey, and he’s eligible to return next year. So it turned into a decision between Reid and Stoever, and Reid played very, very well, so we made the decision.”

When asked if the goaltending situation was settled now, Hamilton said “that would be a good thing. I think they have both earned that right. As long as they give us opportunities to win, we can stop talking about the goalie situation.”