Lumberjacks kill off a slew of penalties, then rise up in the third period to beat Green Bay Gamblers 4-1

MUSKEGON – The Muskegon Lumberjacks had to defeat the referees before they could beat Green Bay on Friday night.

The Lumberjacks killed off four penalties during the second period while the game was tied 1-1, including an uninterrupted five-minute major. 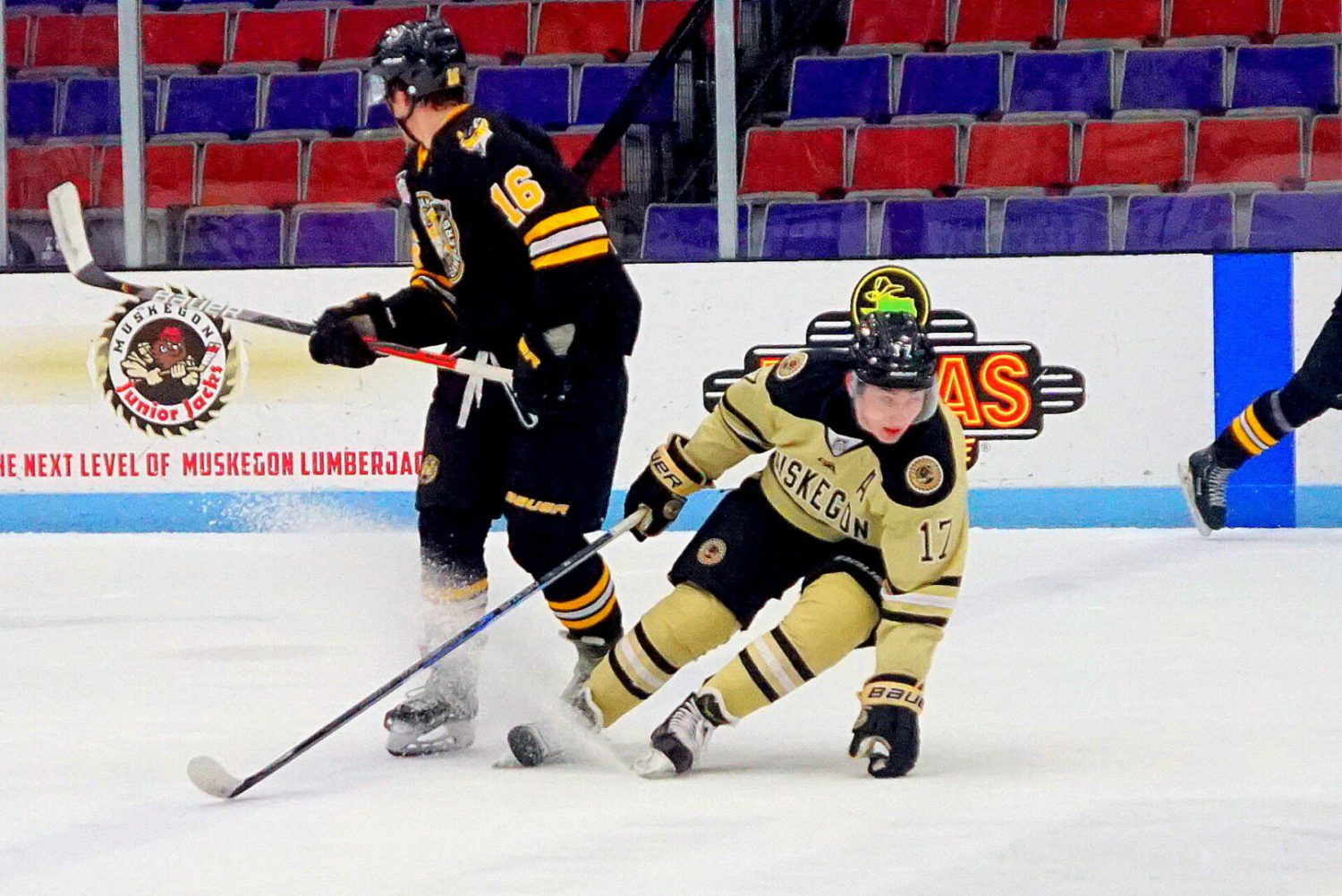 Muskegon then showed lots of energy during the third period, scoring three unanswered goals to secure a 4-1 victory over the Gamblers at Mercy Health Arena.

The Lumberjacks are now 12-6-1 on the season, good for 25 points. The victory allowed the Jacks to pull into second place in the USHL’s Eastern Conference, one point ahead of Green Bay, which has 24.

The teams will play an important rematch on Saturday night in Muskegon, then will meet up five other times during the regular season, and possibly even more during the Clark Cup playoffs.

“We were second from last (in the league) in the penalty kill up to this point,” said Lumberjacks coach Mike Hamilton. “Tip of the cap to the penalty kill. We almost killed off the entire second period. It’s hard sometimes because you use a lot of energy, but guys stayed in the game and we came and dominated the third period.”

Lumberjacks goaltender Jan Skorpik was at the heart of the winning effort, stopping 27 of 28 shots and earning the No. 1 star of the game award. Muskegon outshot the Gamblers 35-28, with 19 of those shots coming during the productive third period.

“Your best penalty killer is your goalie,” said Hamilton. “He has been great, and we have two goalies who have been pushing each other to be great.” 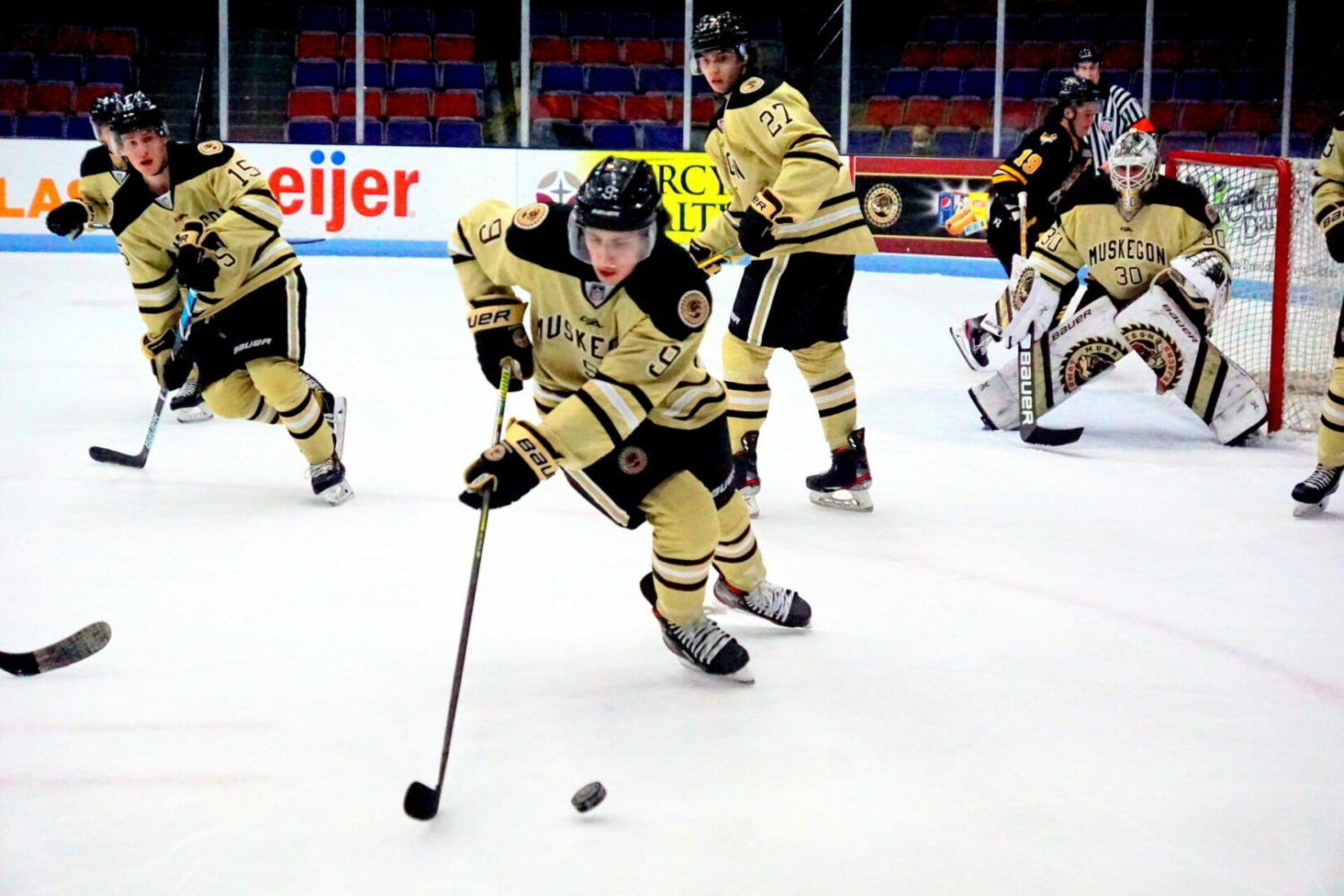 Muskegon’s Rhett Pitlick looks to get the puck out the Lumberjacks zone.

The Gamblers opened the scoring 2:05 into the contest with a goal from Kyler Grundy.

Muskegon tied the game at 1-1 when Captain Dylan Wendt put his fifth goal of the season into the net 6:50 into the first period. The goal came on a rebound from a John Larkin shot.

The Lumberjacks were handed a pair of two-minute penalties and a five-minute major for contact to the head within the first eight minutes of the second period. The major penalty was given to John Druskinis, who also received a game misconduct.

But the Jacks’ penalty-killing unit kept Green Bay from finding the net for the full nine minutes of shorthanded play.

Cameron Berg gave Muskegon its first lead of the night, scoring his 13th goal of the season at the 16:38 mark of the second period. He picked up a loose puck along the boards and fired the puck top-shelf past goalie Matt Davis.

The Lumberjacks maintained their lead late of the second period, killing off another pair of two-minute penalties.

Muskegon increased its lead to 3-1 on a goal from Rhett Pitlick 3:58 into the third period, then closed out the scoring with a tally from Philip Tresca at the 10:12 mark.

The Lumberjacks killed off their final penalty with just under six minutes left in regulation.

Hamilton said it’s important for the Jacks to follow up with another win over the Gamblers on Saturday night.

“It feels good to know that we got one tonight,” said Hamilton. “But the ultimate goal is to move ourselves up in the standings, and if we don’t win tomorrow, we still sit behind Green Bay.” 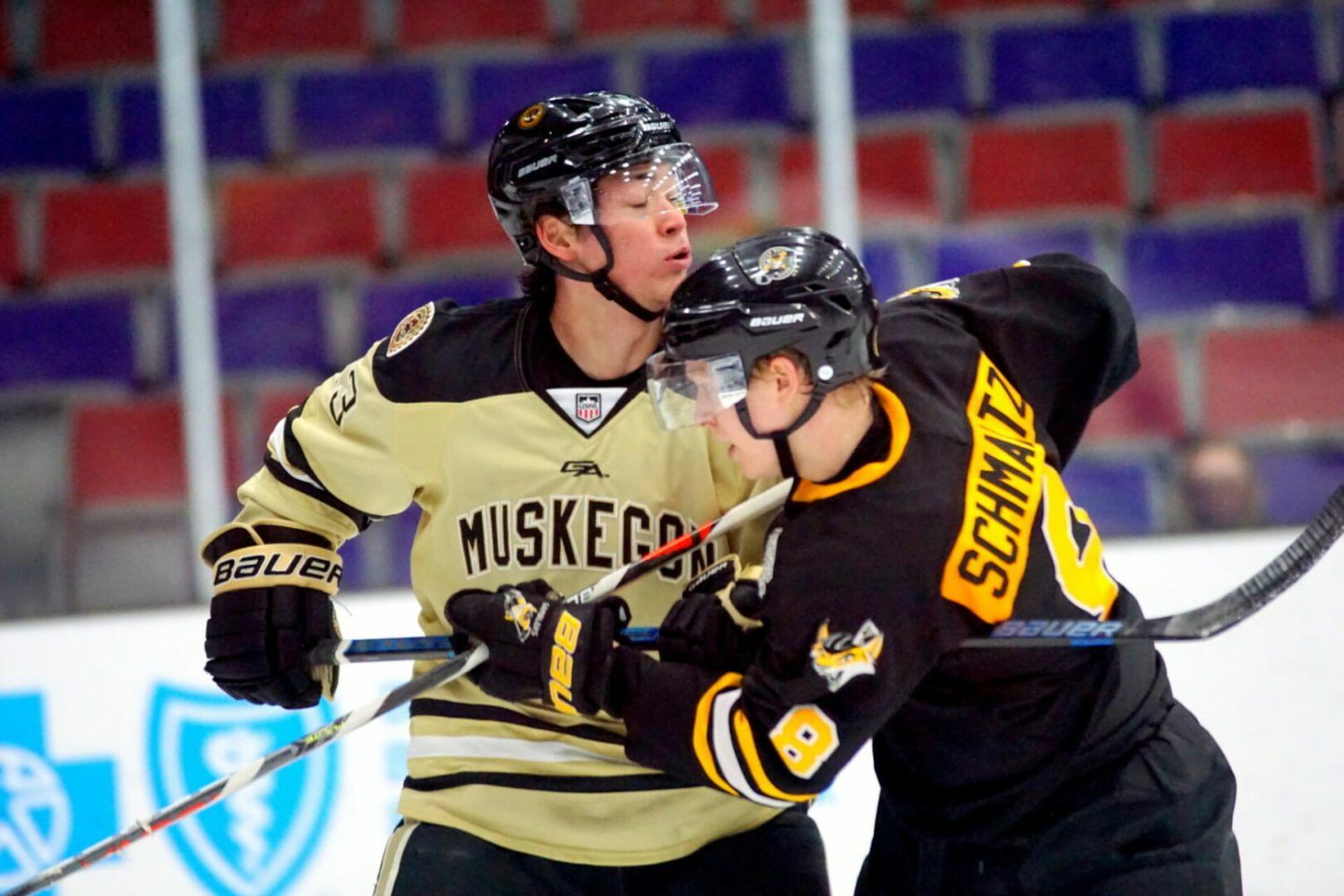