The Muskegon Lumberjacks are living proof after fighting their way back from deficits twice and forcing an overtime shootout on Saturday night before falling to the Team USA Under-17 squad 5-4.

The loss broke a four-game home winning streak for the Lumberjacks, who are now 14-7-1-1 on the season. But they still gained a point in the standings with the shootout loss. They now have 30 points, good for second place in the USHL’s Eastern Conference, six points ahead of third-place Green Bay and only two points behind first place-Chicago.

Muskegon will have an opportunity to move into first next weekend, when they host Chicago on Friday night, then go on the road for two rematches with the Steel on Saturday and Sunday.

Despite Saturday’s loss, the few hundred fans who were allowed to watch the game left Mercy Health Arena still buzzing over a second-period goal by super-talented forward Danil Guschin, who had two tallies in the game.

The Russian forward wowed the crowd by skating with the puck behind the Team USA net, balancing it on the end of his stick, and getting a wrap-around, lacrosse style goal that brought the fans to their feet.

It was certainly video highlight material, and lots of people were saying they expect to see it on ESPN sometime this weekend.

The Michigan in Michigan! @SanJoseSharks prospect, Danil Gushchin pulls off the lacrosse goal made famous by his fellow russian and former @MuskegonJacks forward @ASvechnikov_37!

Hey, @ESPNAssignDesk / @Buccigross we have your top play for #SCTop10 tonight! pic.twitter.com/qKGkb6xHBA

“It was pretty,” said Lumberjacks Coach Mike Hamilton, who added that he doesn’t remember seeing that type of goal scored in a Jacks game before. “It was a nice individual effort that you will probably see on ESPN tonight. That was pretty special.

“He’s a special hockey player. We have been watching him grow under our umbrella for a lot of years. It’s a lot of fun to see where he has taken his game, and it’s fun to see him turn into a well-rounded hockey player. He will be making some money in this game at some point.” 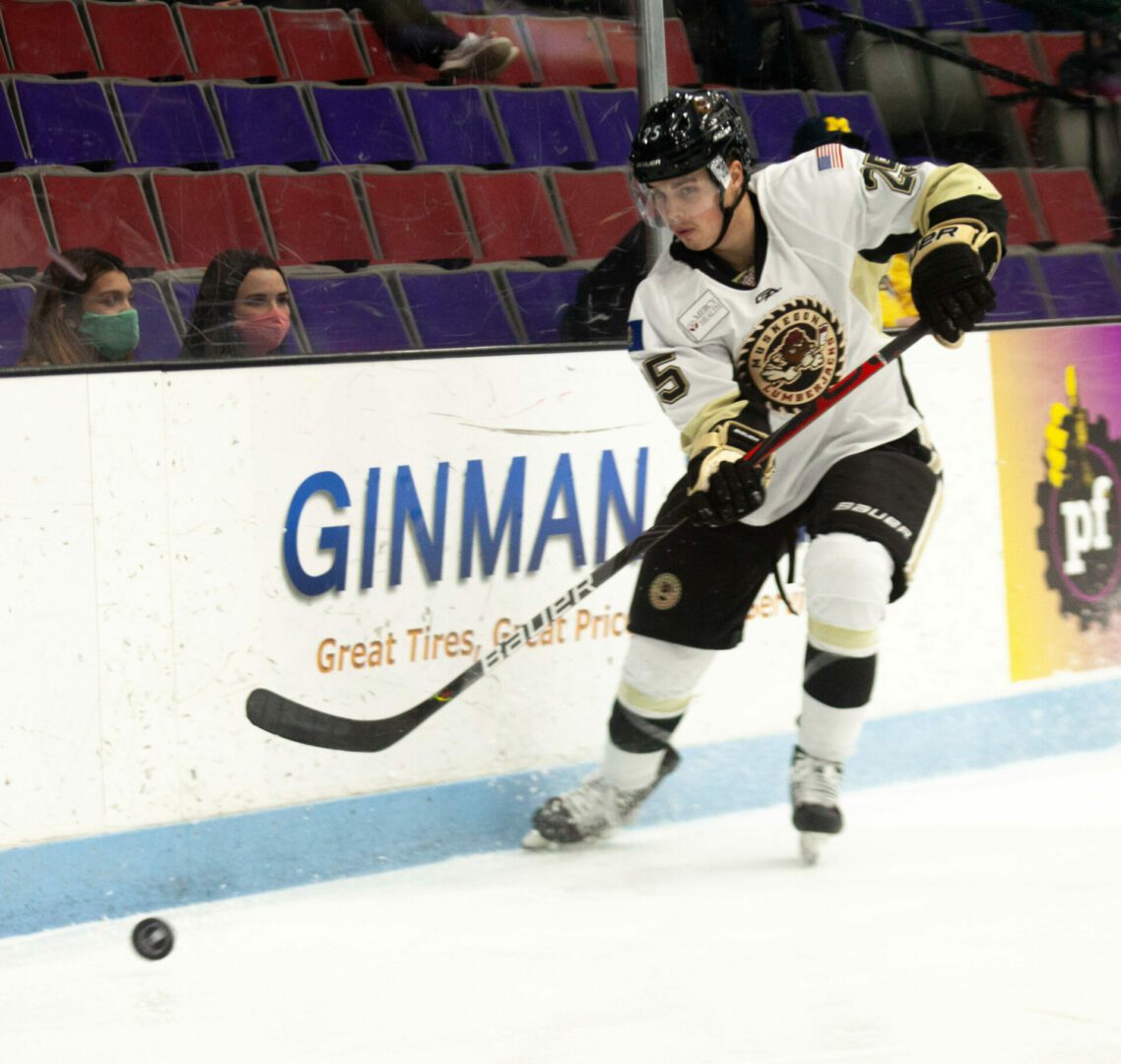 The Lumberjacks also pleased their fans with yet another comeback that almost produced a victory.

Team USA, obviously salty about giving up nine goals to Muskegon on Friday night, came out flying and had a 2-0 lead at the end of the first period.

The visitors extended that lead to 3-1 in the second period, before Gushchin and Jacob Guevin scored pretty goals for the Jacks in the last two minutes, tying the score 3-3 heading into the third.

Team USA again took the lead with a goal in the third period, but the Jacks kept digging and tied the score once again with a goal by Brad Marek at the 16:44 mark.

The five-minute overtime period was scoreless, then Team USA outscored the Jacks 2-1 in the shootout to claim the victory.

But the Lumberjacks are developing a reputation as a team that never says die. On Friday night they trailed Team USA before pulling away for a 9-4 win. Last Saturday against Green Bay, they trailed 3-2  before rallying for a 6-4 victory.

Comebacks are confidence builders for a team, even when they don’t result in a victory, according to Hamilton.

“You start believing a little bit,” the coach said. “If we had a redo, it would be to get off to a better start. I loved to see how the guys stayed with the game. They didn’t give up, and they didn’t get frustrated.” 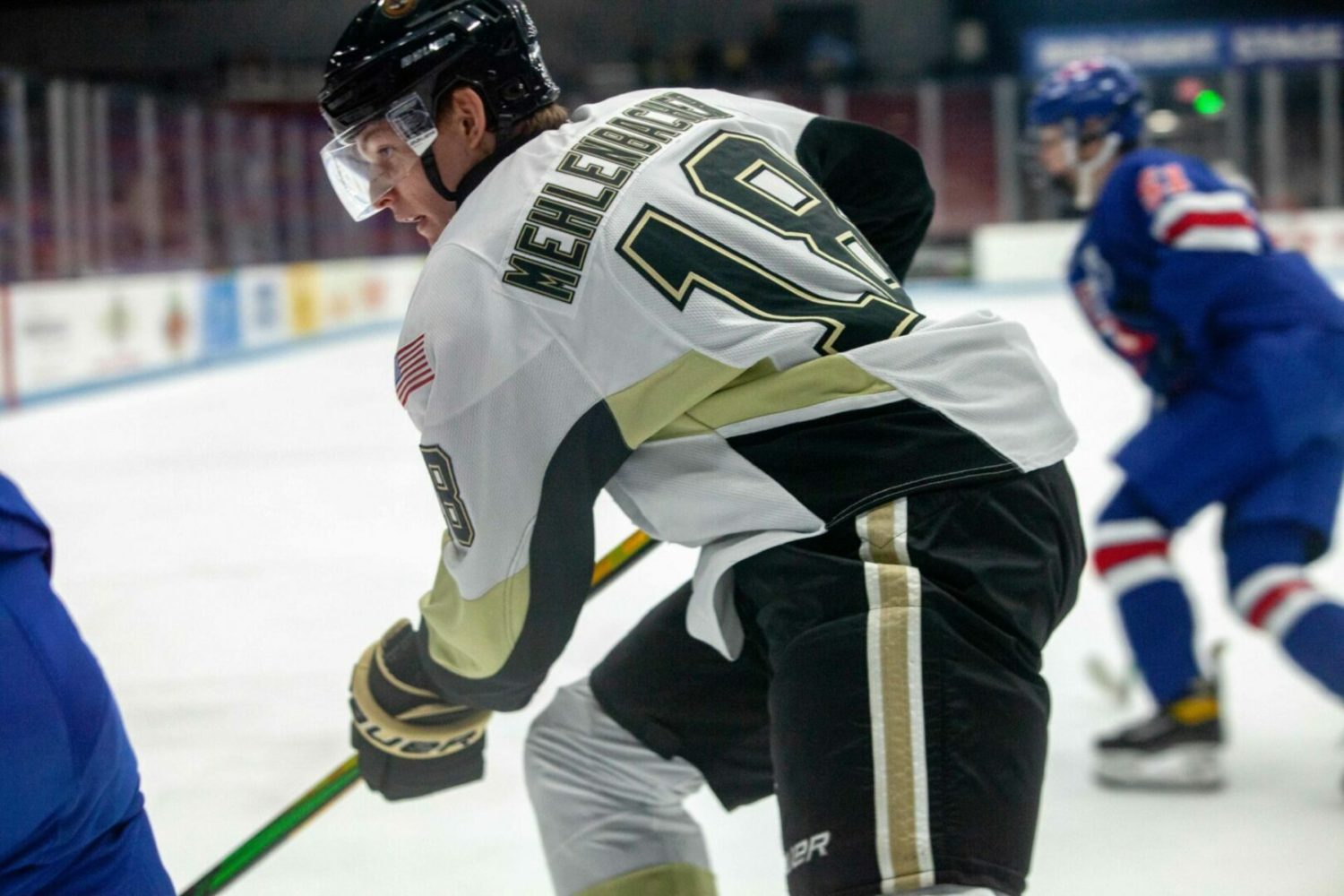 Owen Mehlenbacher pursues the puck along the boards for Muskegon. Photo/Jason Goorman

Team USA took a 2-0 lead after one period with goals from Cruz Lucius and Seamus Casey. The visitors almost made it a 3-0 lead with a near-goal at the 10:33 mark of the first period on a wrap-around effort that was stopped by Muskegon goalie Jan Skorpik and looked like it might have trickled past the goal line.

The play was reviewed by the referee, who conferred with the goal judge and ruled that it did not go in.

The Jacks got on the board at 6:59 of the second period with a nice goal by Gushchin, who stole the puck near the Team USA blue line, broke in alone and beat goalie Dylan Silverstein, making the score 2-1.

The Lumberjacks killed off their third penalty of the second period a few minutes later, then the offense started clicking. Gushchin scored his lacrosse-style goal at the 18 minute mark, then Jacob Guevin knocked in a rebound with 32 seconds left, tying the score 3-3 headed  into the third.

Team USA regained the lead with a goal by Logan Cooley at 11:48, then Muskegon tied it up again when Marek found the net at the 16:54 mark.

The Jacks dominated the five-minute overtime period, outshooting Team USA 5-0, but nothing went in the net. That led to the overtime shootout, when players from each team take turns going 1-on-1 with the opposing goalie.

Rutger McGroarty and Isaac Howard scored in the shootout for Team USA, while Cristophe Tellier scored the only goal for Muskegon, and the Jacks were left with the loss.

Muskegon had a 37-21 advantage in shots on goal.

“We got 3 of 4 points (on the weekend in the standings),” Hamilton said. “I will take that any weekend, no matter who we are playing. If we had any takebacks, it would be the first 10 minutes. From that point on we got better in the first.

“In the second I thought we played pretty well. In the third period we took over, and in overtime we possessed the puck for four minutes and twenty seconds of the five minutes. We did everything but score.”

Tanner Kelly goes in to take the shot during the shootout for Muskegon. Photo/Jason Goorman

Muskegon’s No. 19 Bradley Marek gets in the middle of the Team USA defense. Photo/Jason Goorman

The Lumberjacks celebrate after a goal. Photo/Jason Goorman