They were particularly shaky on the power play, giving up one shorthanded goal, then giving up a goal just seconds after another power play expired.

Luckily Gushchin, who scored 22 goals for Muskegon last season but hasn’t had much luck lately, found the net twice in three minutes in the second period, giving the Jacks just enough offense to take a 4-2 victory.

Muskegon improved to 11-6-1 on the season, good for 23 points and third place in the UHSL’s Eastern Conference standings. They are now just one point behind second-place Green Bay, who will visit the Jacks on Friday and Saturday in a pair of important games.

Youngstown fell to 4-11-0 on the season, goof for eight points in the standings.

Gushchin, who was named the No. 1 star of the game, scored his 10th and 11th goals of the season on a night when the Jacks had a 33-20 advantage in shots on goal, but not many shots were going in.

He took over the game in the second period, with the score tied 1-1. 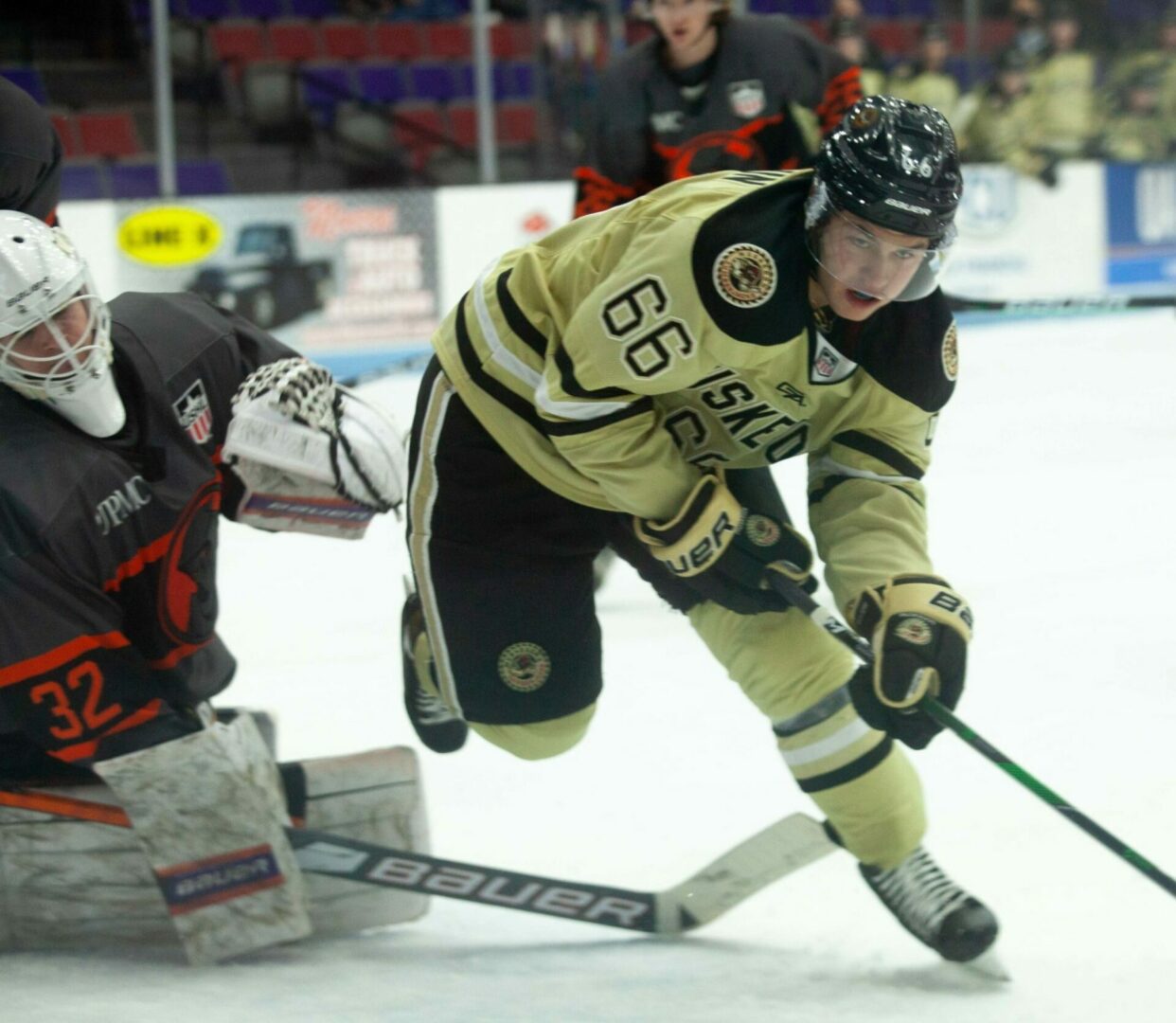 Danil Gushchin gets around Youngstown goalie Mattias Sholl to score his second goal in the middle period. Photo/Jason Goorman

Gushchin scored his first goal at the 15:02 mark, following a flurry of Muskegon shots that missed the mark. He snagged a rebound in the left circle, spun around shooting, and sent the puck past Youngstown goaltender Mattias Scholl.

His second goal came exactly three minutes later when a Youngstown player coughed the puck up along the boards in his own zone. Guschin grabbed it, skated in and put a soft shot past Scholl to make the score 3-1.

“He’s been a little bit snake-bitten lately,” said Hamilton about Gushchin. “I think he has only had one goal in the last five games with about 13 scoring chances, but he was good tonight.”

“The power play was a little bit of lack of effort,” said Hamilton, whose team is usually pretty effective with a man advantage, ranking third in the league in power play success. “We didn’t get back and help some pucks and that is something we need to clean up in a hurry.”

Hamilton admitted that the Jacks will have to be sharper this weekend against the Green Bay Gamblers, who were already in town and watched the game on Thursday. The teams played twice in Green Bay last weekend , with each taking one win.

“We went there last weekend and got a split – they are a very good hockey team,” the coach said about the Gamblers. “We have gained a dislike towards them.” 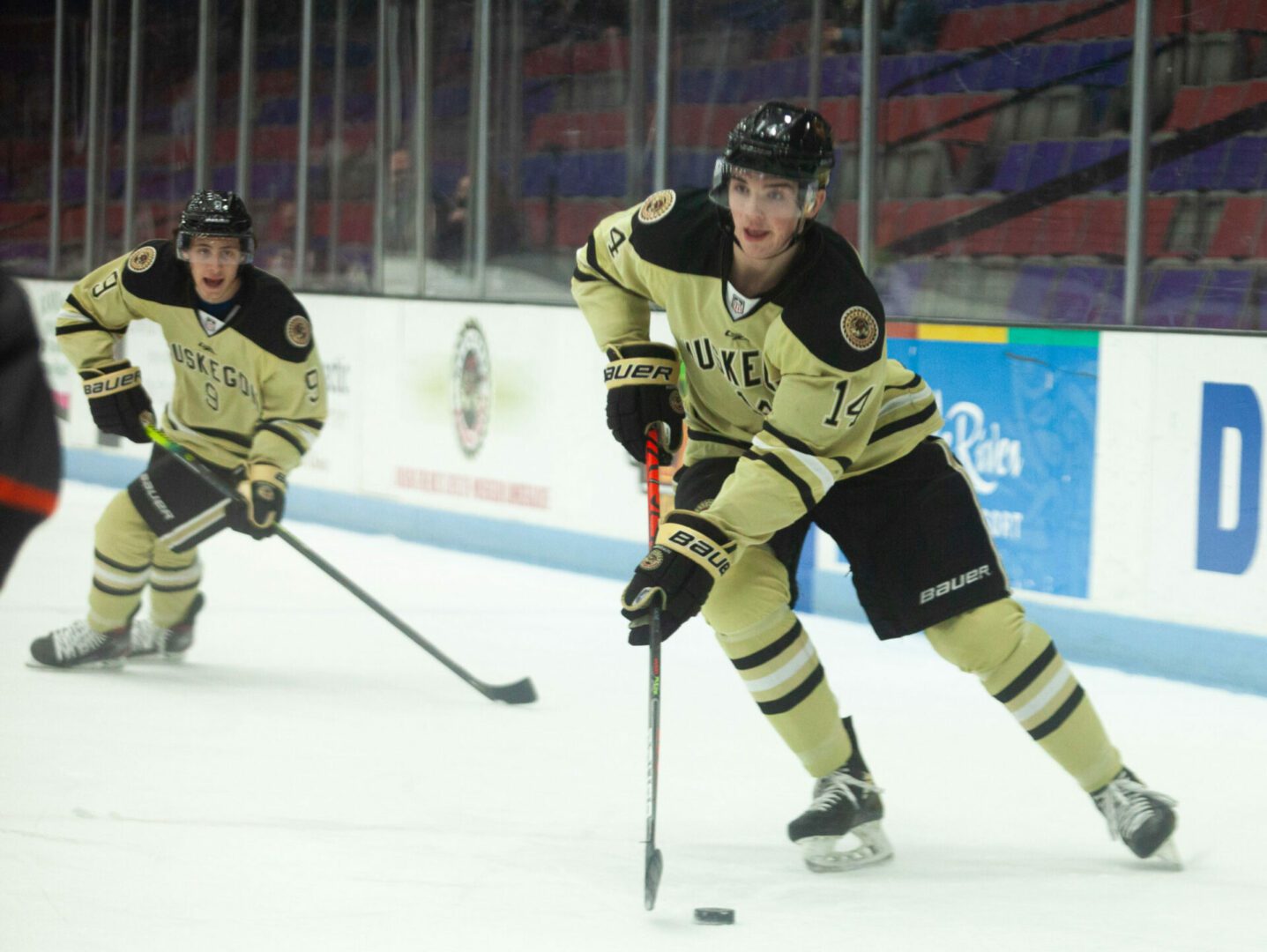 Muskegon defenseman No. 14 Alex Gagne brings in the puck with teammate No. 9 Rhett Pitlick behind. Photo/Jason Goorman

The Jacks took a 1-0 lead in the first period when Tanner Kelly sent a beautiful crossing pass to Brad Marek, who scored just 2:16 into the game.

Youngstown tied things up with the shorthanded goal, scored by Jack Malone, 1:20 into the second period.

Guschin’s two goals followed, giving the Jacks a 3-1 lead at the second intermission. Youngstown’s Grant Hindman scored at 3:08 of the third period, making the score 3-2.

The Jacks seemed to have the game wrapped up when Youngstown was called for a penalty with only 1:50 left in the game. But the power play was again weak, and Muskegon goalie Jan Skorpik had to make two good saves while his team had a man advantage to preserve the one-goal lead.

Youngstown was called for another penalty with 25 seconds left, and Muskegon’s Tom Sinclair finally wrapped up the victory with an empty-net goal with five seconds remaining.

Kelly, Dylan Wendt, Rhett Pitlick and Jacob Guevin had assists for the Lumberjacks. Skorpik stopped 18 of 20 shots to collect the win.

Danil Gushchin makes a cut near the blue line for Muskegon. Photo/Jason Goorman

Bradley Marek tries to get around the Youngstown defender after a face off. Photo/Jason Goorman

Rhettt Pitlick controls the puck for Muskegon in a game earlier this season. Photo/Jason Goorman

Cristophe Tellier digs the puck out along the boards for Muskegon. Photo/Jason Goorman

Owen Mehlenbacher looks for a loose puck to pop out in front of the Youngstown net. Photo/Jason Goorman

Jack Williams watches the puck across ice next to Youngstown defender No. 8 Jack Silich. Photo/Jason Goorman