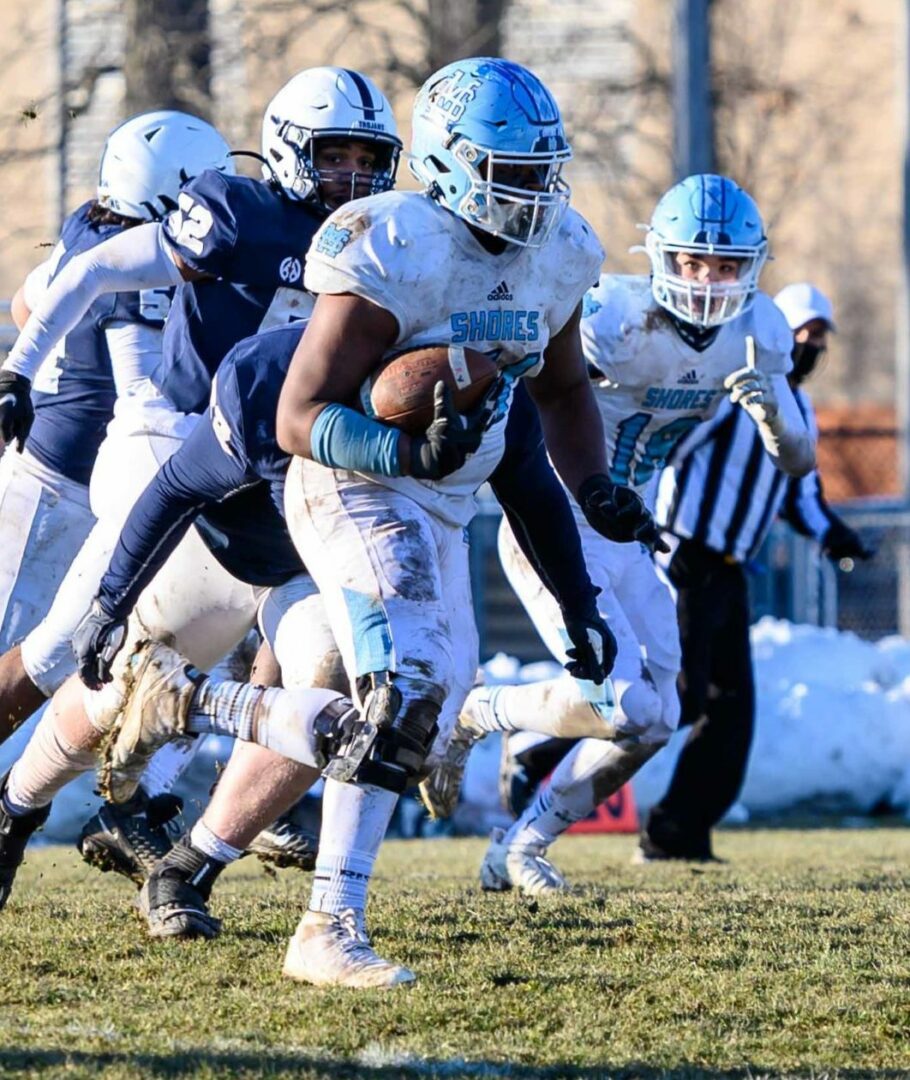 D.J. Caviness makes the game changing tip and interception and lumbers for return yards to put Mona Shores in a position to win the game. Photo/Eric Sturr

He was 1-for-2 on only three attempts before Saturday.

But with a third-consecutive berth in the Division 2 state semifinals on the line for the defending state champion Sailors, DeKuiper had his number called.

The senior responded to the big moment, calmly connecting on a 24-yard field goal as time expired to push the Sailors (10-0) to a 24-21 road win over East Lansing on the Trojans’ home field in a Division 3 regional championship game.

“It’s unexplainable – I’m just so excited and really happy that we won,” DeKuiper said after the game. “I just told myself, ‘It’s just like a PAT, just a couple yards out from where I usually take a PAT.’”

The winning field goal was set up by a big time defensive play from junior lineman DJ Caviness. The Trojans had the ball at midfield with 30 seconds to play when Caviness intercepted a tipped pass – his first career interception – and returned it 28 yards to the Trojan 28-yard line with 12.5 seconds left.

“We have a strong defense and we thought for sure we were going to get the ball back with enough time,” Caviness said. “We just don’t quit, we don’t want to lose. I just thought ‘Catch the ball, just catch it. Now don’t fumble.’”

A pair of runs by senior quarterback Brady Rose, followed by timeouts, got the Sailors down to the 7-yard line with 2.8 seconds left to set up DeKuiper’s winning kick.

“I’m just so proud of the way they find a way to win,” said Mona Shores Coach Matt Koziak, whose team has now had three close games in a row in the playoffs. “They know they’re never out of a game, it only takes one play and it doesn’t matter which kid. They don’t care about accolades or who gets what. 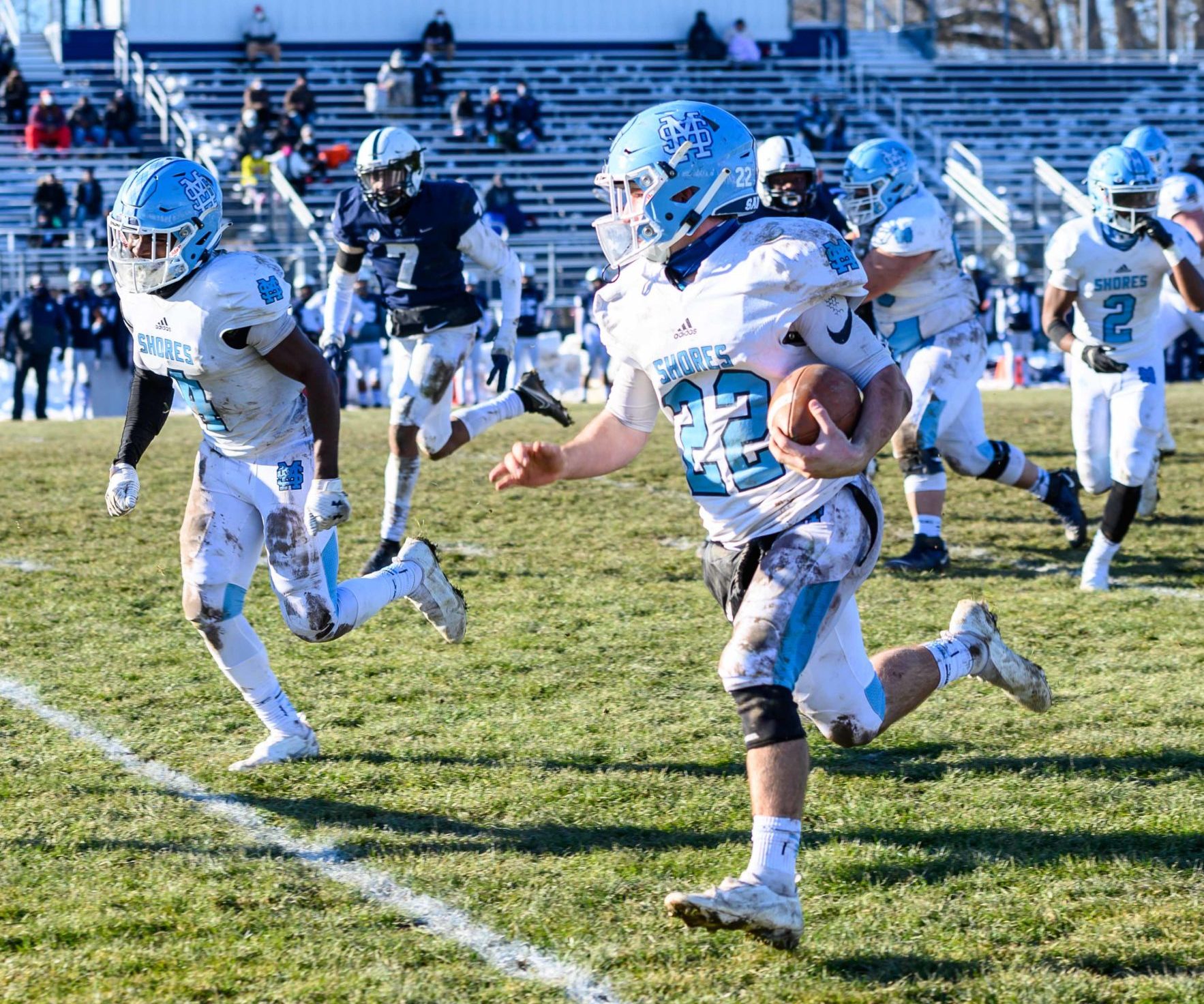 Rose with another big run for the Sailors, takes the ball inside the 10 yard line. Photo/Eric Sturr

“It’s a long season and now with the layoff, these kids’ bodies and emotions have been through the wringer. What it says about these kids, they respect the process, they get their bodies ready for this. They expect a long run (in the playoffs), that’s an expectation that they have now.”

Rose led the Mona Shores offense with 204 yards on 15 carries, with much of that coming on his two touchdown runs. He was 4-for-8 passing for 14 yards and an interception.

Rose credited his teammates for coming up with big plays in the big moments.

The Sailors will host Traverse City Central (9-1) in a state semifinal game next Saturday. TC Central beat North Farmington 50-22 in another regional final.

Koziak said field conditions will determine if the game will take place at Sailor Stadium or on a nearby turf field. 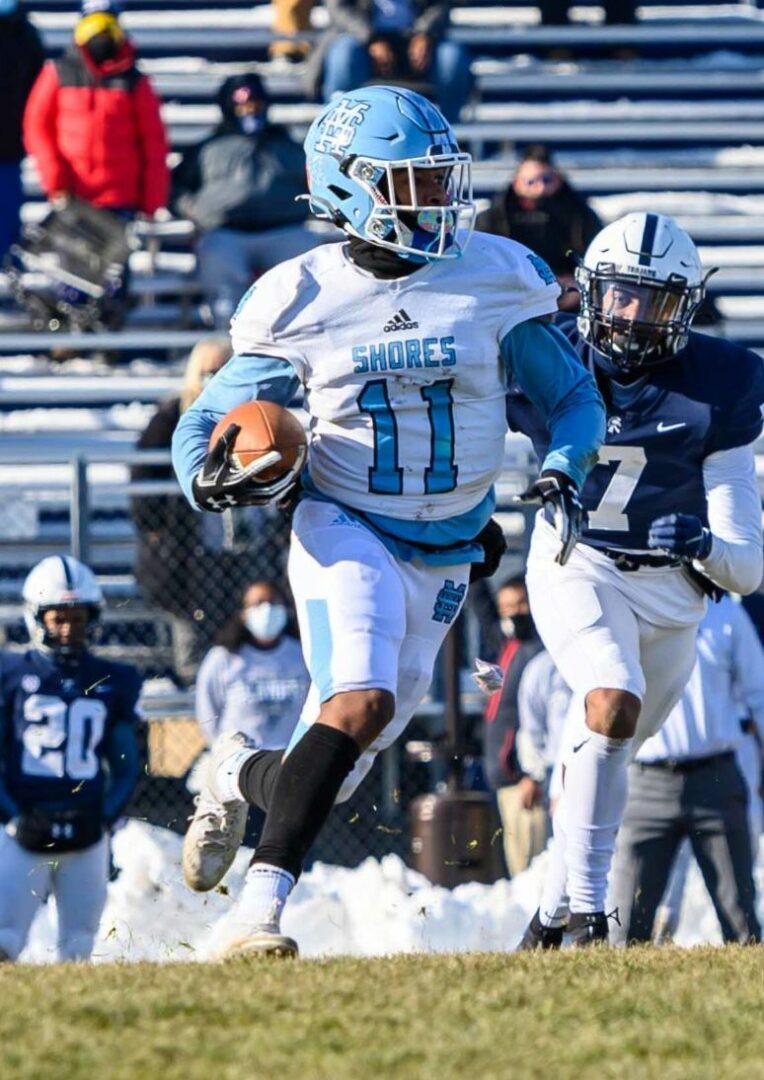 Elijah Farnum takes the pitch on the end around for the Sailors. Photo/Eric Sturr

East Lansing seized momentum at the start of the game, forcing a three-and-out from the Sailors, then scoring a 61-yard touchdown on its first offensive play.

The Trojans had chances to extend that lead after Mona Shores failed to score on its next three drives, but the Sailor defense held strong with big plays, including a fourth down stop at their own 18-yard line with 4:41 to play in the second quarter.

On the very next play after that stop, Rose took off for an 82-yard touchdown run to get the Sailors on the board and tie the game at 7-7. That score held until halftime.

The Sailors struck first after the break on a 13-yard touchdown run by Keondre Pierce with 5:35 to play in the third. The score gave Mona Shores its first lead at 14-7.

The Trojans didn’t quit, though, and quickly responded with a touchdown run with 7:48 to play to make it 21-14.

East Lansing forced a Sailor punt on the next drive and took over with 4:12 to play. Two minutes later, the Trojans scored on a 3-yard run to tie the game at 21-21.

Mona Shores drove to around midfield on the next drive, but punted with 48 seconds left. East Lansing picked up a pair of first downs before Caviness came up with the clutch interception to set up the winning field goal.

Elijah Johnson ran for 46 yards and Dahmir Farnum had 44 for Mona Shores. Khyree Hamel led the defense with eight tackles and Karsen Marihugh had seven tackles and shared a sack.

East Lansing’s Brevin Jackson was 13-for-23 passing for 223 yards, a touchdown and an interception and ran for 17 yards and a score. Mason Woods totaled four catches for 94 yards and a touchdown, while Evan Boyd had four grabs for 71 yards.

Asher Gregory had 32 yards and a touchdown for the Trojans.

Dahmir Farnum breaks tackles and picks up a big first down late in the game. Photo/Eric Sturr

Brad Rose breaks through to the secondary and rips off another long touchdown run. Photo/Eric Sturr

Elijah Farnum with the end around run to move the chains for the Sailors. Photo/Eric Sturr

Larry White hauls down the East Lansing runner in a heap. Photo/Eric Sturr

Kemper Millis gets to the second level to block for his running back. Photo/Eric Sturr