MUSKEGON – Muskegon football coach Shane Fairfield never dreamed he would be standing on the turf at Hackley Stadium in the bitter cold of January, fighting back tears of joy following a big playoff win.

But it was exactly because the game was in January that made it so special. 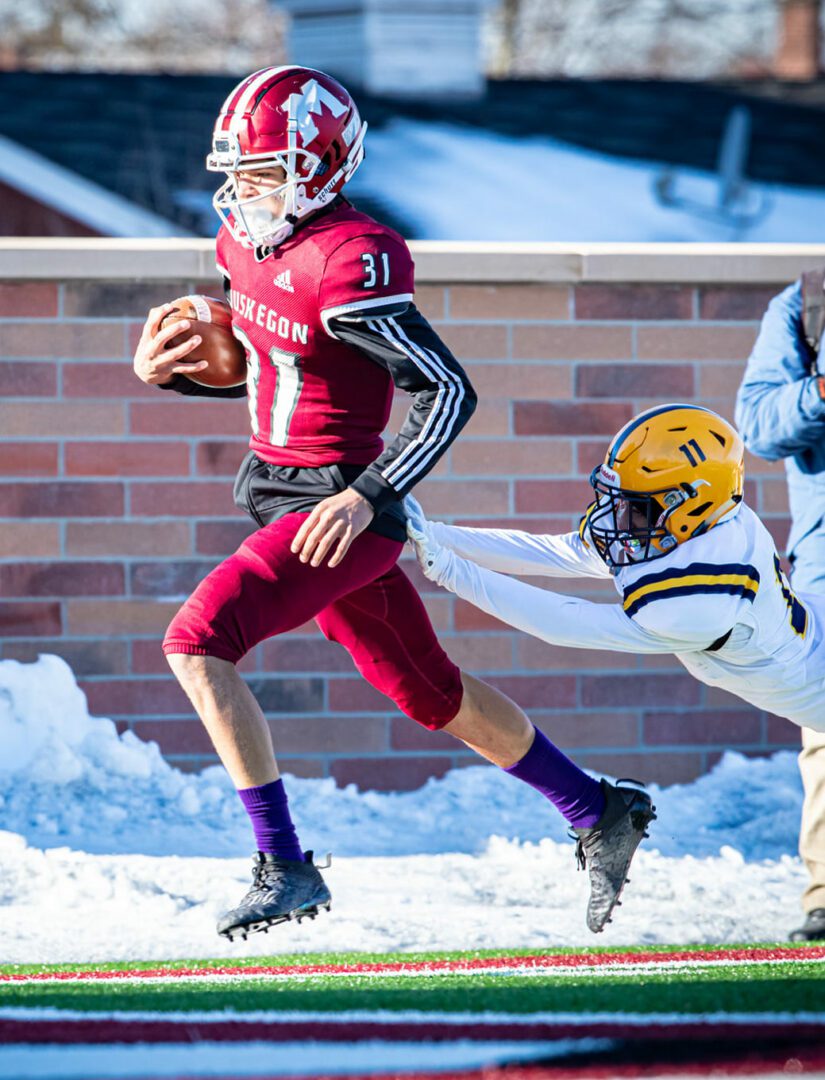 Fairfield’s Big Reds have won a lot of important games in his 11 seasons on the sidelines, but never after having to wait eight weeks to play its next contest.

Despite the long layoff, the Big Reds exhibited little rust. Senior quarterback Amari Crowley threw two touchdown passes, the defense was suffocating all day, and Muskegon walked away with a stunningly easy 24-0 victory over East Grand Rapids on Saturday in a long-awaited Division 3 regional championship game.

Muskegon, now 9-1 on the season, now goes on the road to play DeWitt next Saturday in the state semifinals. One more victory will put the Big Reds in the state finals at Detroit’s Ford Field for the fifth straight season.

After the game, in a team huddle on the field, Fairfield reminded his players that Muskegon has now won 121 games in his 11 seasons, but said “none of them made me feel the way this one does. You went 55 days without playing a game. You are resilient. You inspire me. You want me to make myself better.”

The coach reiterated his feelings to reporters a few minutes later.

“This win on Jan. 9 will never be forgotten in my heart and soul,” said Fairfield, whose team has now won five straight regional championships. “I’m gonna cry right now because it means so much to me.”

Perhaps the biggest story of the day was Crowley, a first-year starting QB who began the season kind of slowly, but has gained confidence and become a major weapon with his legs and his arm as the season has progressed.

On Saturday he awed everyone with his passing, completing 11 of 13 throws, including two touchdown passes to Jeremiah Dault in key situations to help seal up the victory. 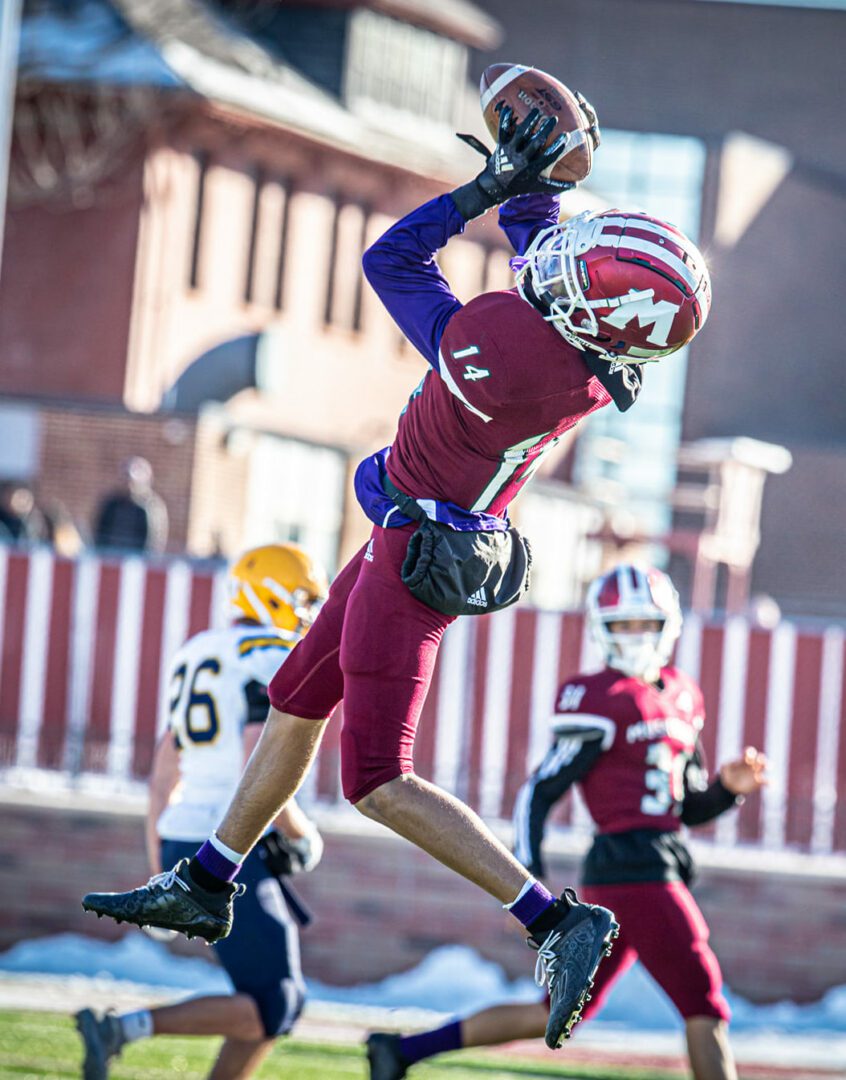 “The field was covered with ice during our first practice, and I never saw him throw so well,” Fairfield said about Crowley. “He’s just playing loose and confident and the receivers are catching the ball. He’s spot on right now and the kids are rallying around him.”

“I knew we had receivers who can catch the ball,” Crowley added. “I just trust my teammates, put it in the right spot and just throw it. I thought we might be a little rusty, but we threw off the rust in practice and had out A game today.”

The Big Red defense also played like it has been playing every week, shutting down East Grand Rapids almost from the beginning of the game. Their mission was made a little easier when Pioneer quarterback Patrick Burns was injured late in the first quarter and was done for the day.

The defense held the Pioneers to only 54 yards rushing, 19 yards passing and seven first downs. Muskegon ended the game with a mammoth 361-73 advantage in total offense.

“For the defense we really had to go back to basics, and they just played football from there,” Fairfield said. “To get a shutout was huge going into next week.”

East Grand Rapids took the opening kickoff and moved the fall at first, advancing from its own 36-yard line to the Muskegon 35, before the Big Red defense came up with a big stop and the ball turned over on downs.

Muskegon ruled the day from there.

The Big Reds marched 70 yards in five plays on their first possession, and scored on a 5-yard run by Myles Walton with 7:11 left in the first quarter. The extra point game Muskegon a 7-0 lead. 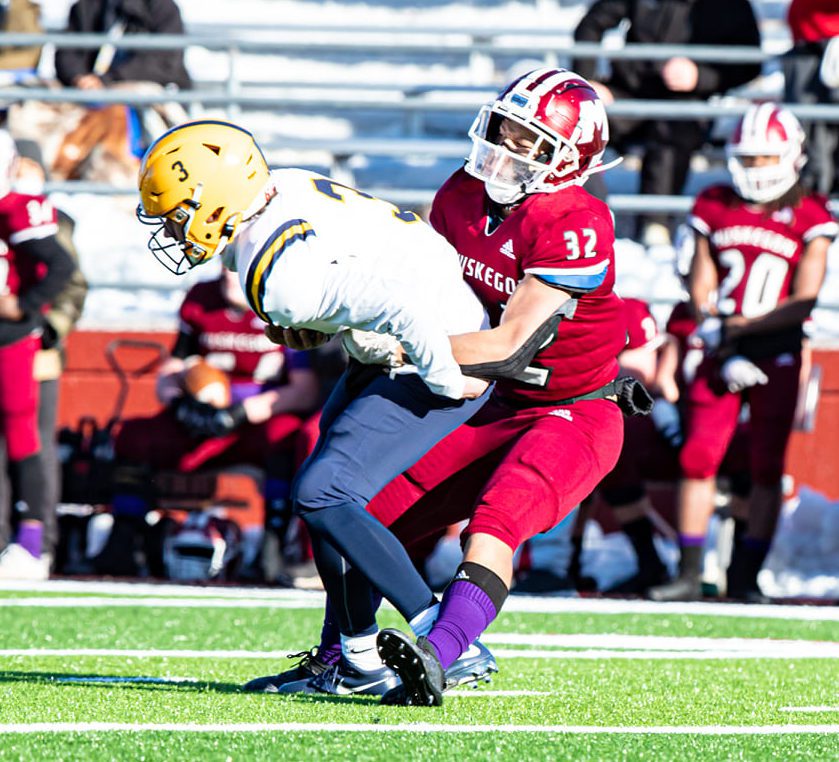 Muskegon’s No. 32 Meshaune Crowley ties up EGR for a loss. Photo/Tim Reilly

The big play on that drive came on the first snap, when Kitchen broke loose for a 35-yard scamper to the East Grand Rapids 35-yard line. The visitors were flagged for a personal foul on the play, giving Muskegon the ball at the 20.

On their third possession of the game, the Big Reds drove from their own 45 to the East Grand Rapids 3-yard line, before losing a fumble. But the defense pinned the Pioneers down at their own 2, forcing the visitors to punt from the back of their own end zone.

Muskegon got the ball back at the Pioneer 10, but a penalty and a sack pushed them back. The Big Reds faced a fourth-and-long situation at the East Grand Rapids 29-yard line, but Crowley saved the drive by finding Dault in the corner of the end zone with a perfect touchdown pass with 38 seconds left in the first half.

The extra point gave Muskegon a 14-0 lead at the break.

Muskegon took the kickoff to start the second half and drove from its  own 34 to the Pioneer 6. Kitchen ran the ball into the end zone for an apparent TD, but a penalty nullified the score and put the Big Reds back at the 21-yard line.

Two plays later, Crowley connected with Dault for another touchdown pass, this one from 15 yards out, and the extra point gave Muskegon a 21-0 lead with 8:20 left in the third.

Big Red kicker Adrian Ramos completed with scoring with a 21-yard field goal with 17 seconds left in the third quarter.