Big Reds have shaken off the rust, ready to continue push for a fifth straight appearance in state finals

MUSKEGON – Reaching the state finals has become a tradition for the Muskegon football team.

Of course, success in the finals has been a mixed bag for the Big Reds – they are 1-3 in recent seasons – but the impressive fact is that they’ve made it to the big show

for four straight years, and seven out of the last eight seasons.

That’s a feat that any high school sports program would be extremely proud of.

But in this strange season, many Muskegon players, coaches and fans were guessing that the annual trip to the finals would probably end, not because of any lapse in the team’s quality of play, but because of COVID. The playoffs were postponed in mid-November due to another pandemic outbreak, and to many it seemed unlikely that the games would resume. 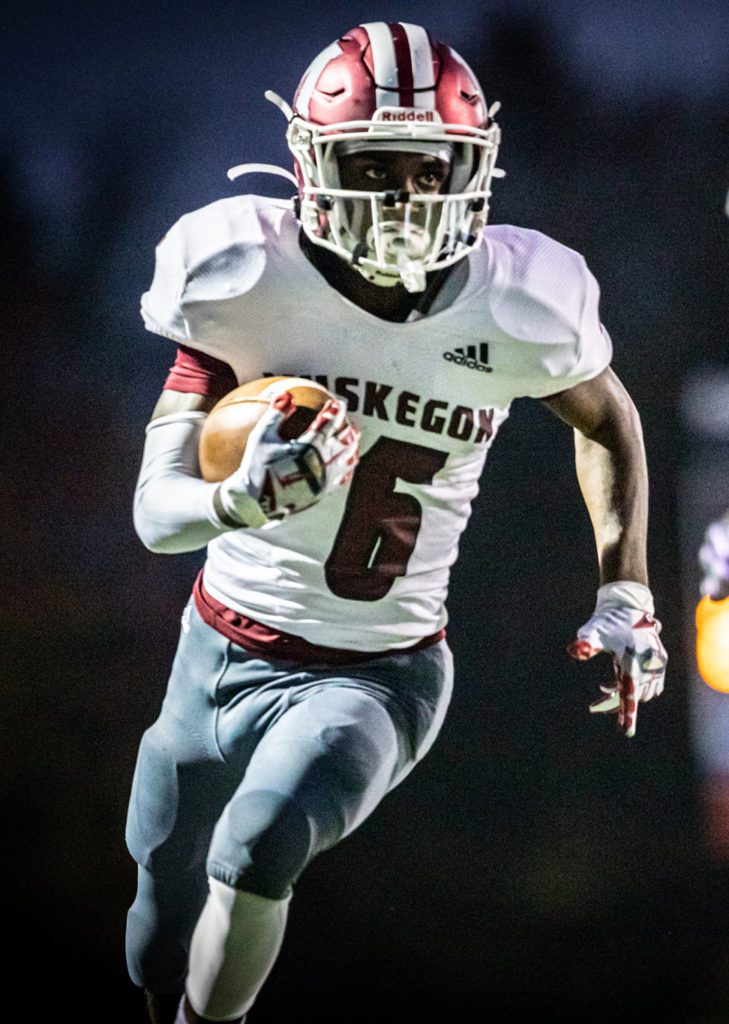 But now the final three rounds of the playoffs are back on, albeit eight weeks later, and the Big Reds will resume their drive for a fifth straight appearance at Detroit’s Ford Field on Saturday in a Division 3 regional championship matchup at home against East Grand Rapids.

Kickoff is set for 1 p.m. The winner will advance to the state semifinals a week later, against the winner of Saturday’s Stevensville Lakeshore-DeWitt regional final.

From the beginning of the season, Muskegon Coach Shane Fairfield believed that this current crop of Big Reds had the tools to make another appearance in the finals. And he’s happy that his team will get another unexpected chance to live up to its potential. But said that’s not his main concern as teams across the state head into January playoff games for the very first time.

“Most definitely,” Fairfield said, when asked if he thought this team could do the same as the last three. “Even without the spring and summer, I knew this was a good group, and of all the teams I’ve had, this is one that could definitely do so.

“During the pandemic I’m excited to be able to play any game. But I have mixed emotions. To me, you do so much in the offseason and throughout the season to keep kids healthy and safe to play physical and fast-paced, and we’ve never had to get ready for a game after a very long layoff. Keeping everyone safe and getting them into shape and ready to play mentally has been our main goal.”

The Big Reds will enter the game with an 8-1 record. During the COVID-shortened regular season they defeated Holland 59-14, Reeths-Puffer 39-7, Zeeland East 49-20, Zeeland West 15-14, and Grand Rapids Union 56-14. Their only loss came in Week 2 in a 21-14 thriller against conference rival Mona Shores.

They cruised to victories in all three of their previous playoff games – 56-7 over Greenville, 34-12 over Cedar Springs, and 47-21 over Marquette in a district championship contest.

Muskegon has outscored its opponents 369-130. 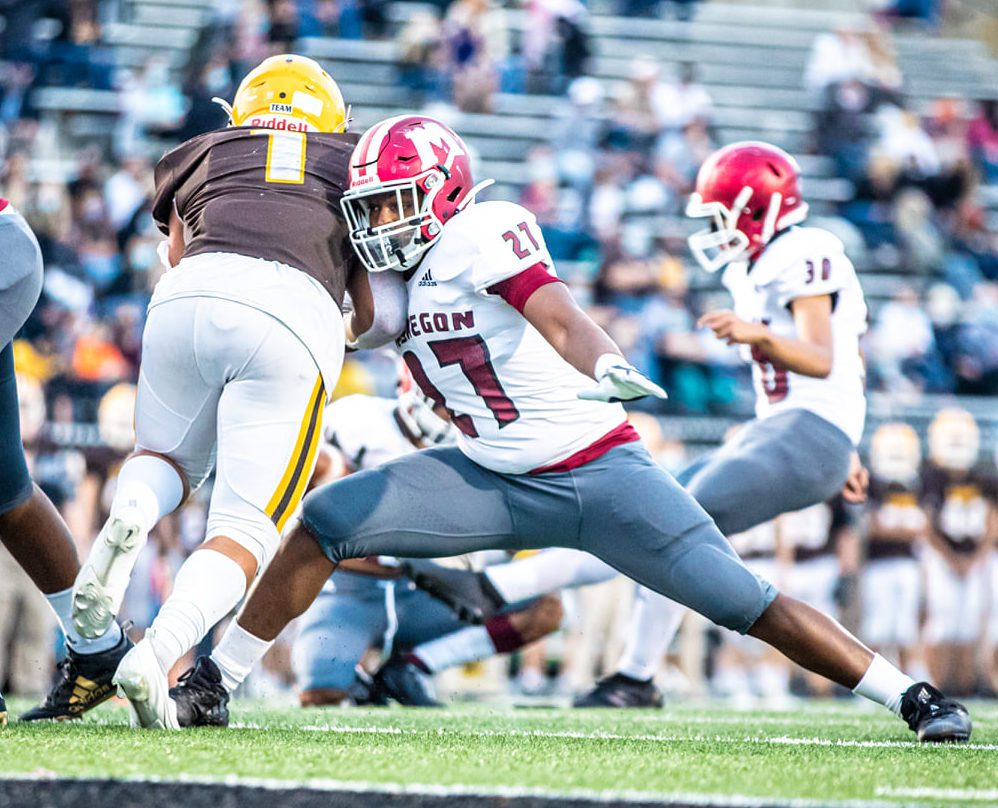 In their most recent game, on Nov. 13 against Marquette, they flashed the type of offensive explosiveness that wins state championships. Running back Jacarri Kitchen tore through the opposing defense for 217 yards on the ground. All-purpose quarterback Amari Crowley passed for 127 yards and two touchdowns and rushed for 135 and another TD.

Myles Walton found the end zone three times, including once with a 65-yard punt return. Receiver Jeremiah Dault had four catches for 65 yards, including one touchdown reception.

If Muskegon had played East Grand Rapids the next week, as originally scheduled, there’s little doubt that the high-flying offense would have lit up the scoreboard again. But now, after weeks of going without any sort of workouts, and only two weeks of preparation, can the same still be expected?

Fairfield isn’t certain of that, and says the key to the game will be going back to basics and playing fundamentally sound football.

“Those are going to be the keys, ball security, executing, and trying not to be too cute,” the coach said. “We just need to take care of the football and try to tackle better than them. I just wish, during the shutdown, that we could have had some type of contact with the kids, instead of having to do pushups and sit-ups over zoom video. One thing I do know is that the kids will play hard. They will leave it all out there.” 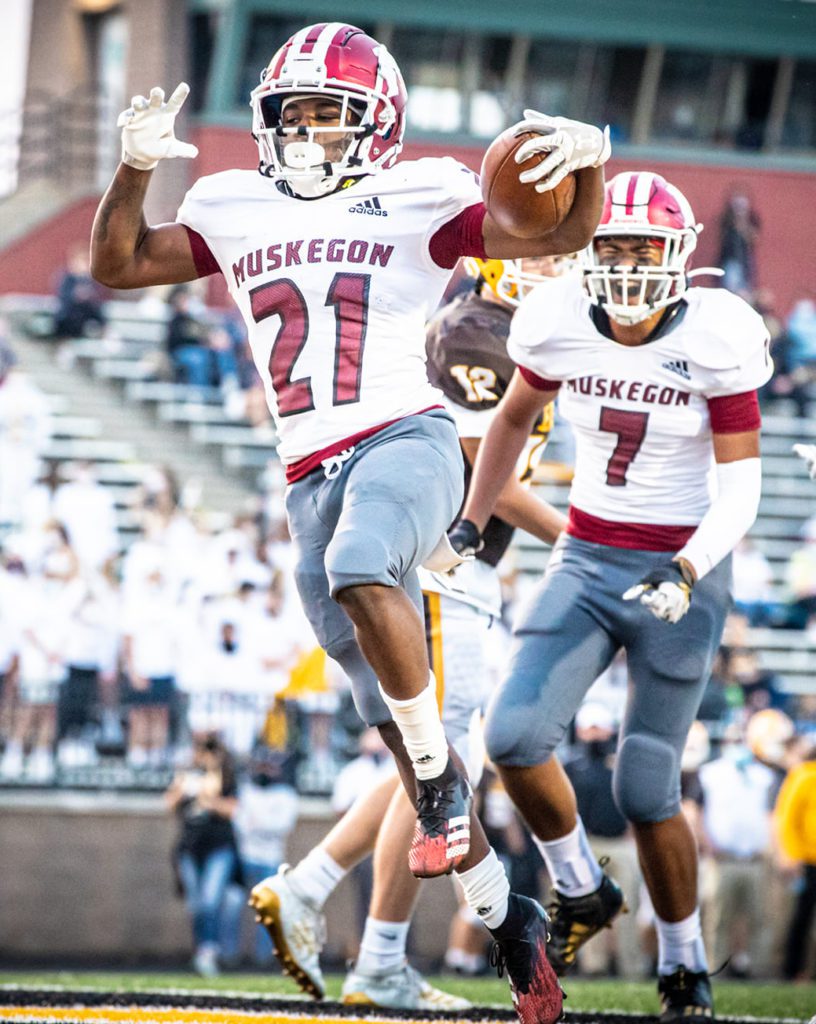 East Grand Rapids is probably sick of playing Muskegon, for the simple fact that the Big Reds have ended the Pioneers’ season in the playoffs for three straight years. Some might suspect that EGR may not be as good as it’s been in previous years, since it posted a mediocre 3-3 record during the regular season, before winning three straight in the playoffs.

But the Pioneers have been a challenge for Muskegon on several different occasions in recent years. In 2016 the game was no blowout, with the Big Reds earning a 28-10 playoff win. In 2018 Muskegon barely squeaked out a 42-35 playoff victory, and in 2019 the Big Reds escaped with a 28-23 regular-season win, before cruising past EGR in a playoff rematch.

Fairfield said his players realize the Pioneers are still very much a threat, despite their so-so regular season.

“They are just as traditionally sound as we are,” he said. “They have a championship culture in every sport over there. They are well-disciplined and well-coached. Their dads and uncles and grandpas played there, which is the same type of family tradition we have at Muskegon.

“(The players) know what they are getting into. East Grand Rapids was 6-3 last year, as well. They are always the best 6-3 team. They play a very tough schedule, against teams like Lowell and Forest Hills Central. They will give us all we can handle.”

Fairfield also said his team will be more than ready to resume its playoff push. He said he’s been impressed with the players’ professional approach about returning to practice and getting back in game shape after the long layoff.

“We just had a great two days of practice, and they have continued to impress me with their resilience and how they keep coming and practicing with high intensity,” said Fairfield, who added that his team is currently dealing with a few injuries, but would not say who is hurt, or how serious the injuries might be. “They’ve been very business-like about it.

“We had another coach at one of our practices, and when we were done, he said ‘Wow, it looks like you guys never skipped a beat.’ You’re not going to see a lot of fancy stuff from us on Saturday. It’s going to come down to fundamentals.”