After tasting a rare regular season defeat, Big Reds are refocused on state title goal, ready for DeWitt in semifinals

MUSKEGON – For a team that wins a lot, year after year, the thrill of victory can lose its edge.

And when winning isn’t quite as sweet anymore, it can become more difficult to accomplish.

The Muskegon Big Reds might be a good case in point. 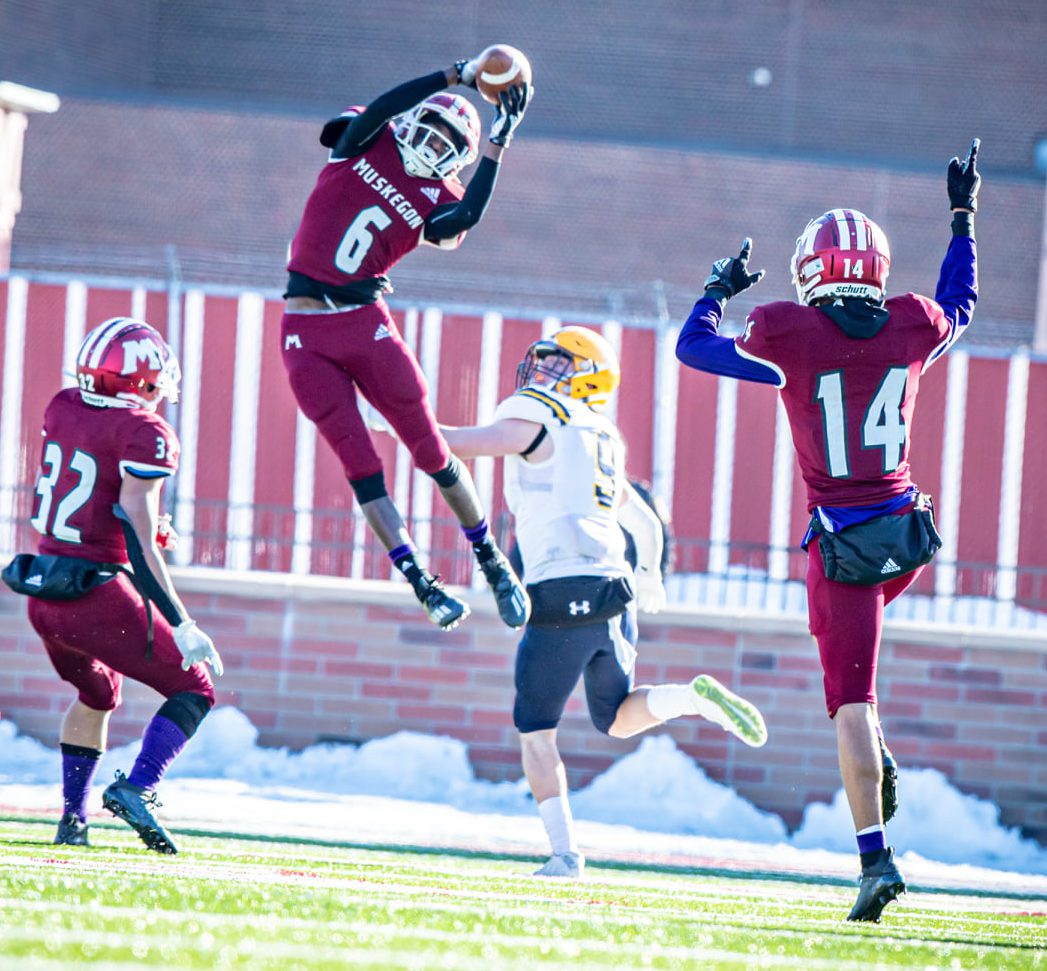 Damari Foster leaps in front of teammates No. 32 Meshaune Crowley and No. 14 Jeremiah Dault to make an interception for Muskegon. Photo/Tim Reilly

But this season has been a little bit different for the Big Reds, in ways beyond the COVID-19 delays. It’s worth revisiting as Muskegon prepares to play undefeated and No. 1 ranked DeWitt in the Division 3 state semifinals on Saturday in a 1 p.m. game that will be played at Lansing Catholic Central High School.

On Sept. 2, 2016, Muskegon lost a regular-season game 38-35 to Lincolnville-Stevenson, a Chicago-area team. The Big Reds went on to win all seven of their remaining regular season games that year.

Over the next three seasons, they went 27-0 in the regular season. This fall they opened with an easy win over Holland, bringing their regular season winning streak to 35 games.

It finally came to an end in the second week of 2020, when Muskegon fell to Mona Shores 21-14. The loss not only halted the winning streak, but it came at home at Hackley Stadium in the first game after major renovations, which included the installation of artificial turf.

In the fifth week of the season, the Big Reds barely squeaked past a very good Zeeland West squad 15-14. The win only came when Myles Walton returned a punt 95 yards late in the game, when another loss was knocking on the door.

The loss to Mona Shores, and close call against Zeeland West, woke the Big Reds up, according to senior running back Jacarri Kitchen. He said he and his teammates agreed that they needed to be reminded that they weren’t invincible, and had to regain their edge if they wanted to reach the state finals for the fifth straight season.

“We didn’t think we would lose at all,” Kitchen said. “Now everybody is hungry again. I think we needed that loss. To lose at home, that was an eye-opener for us.” 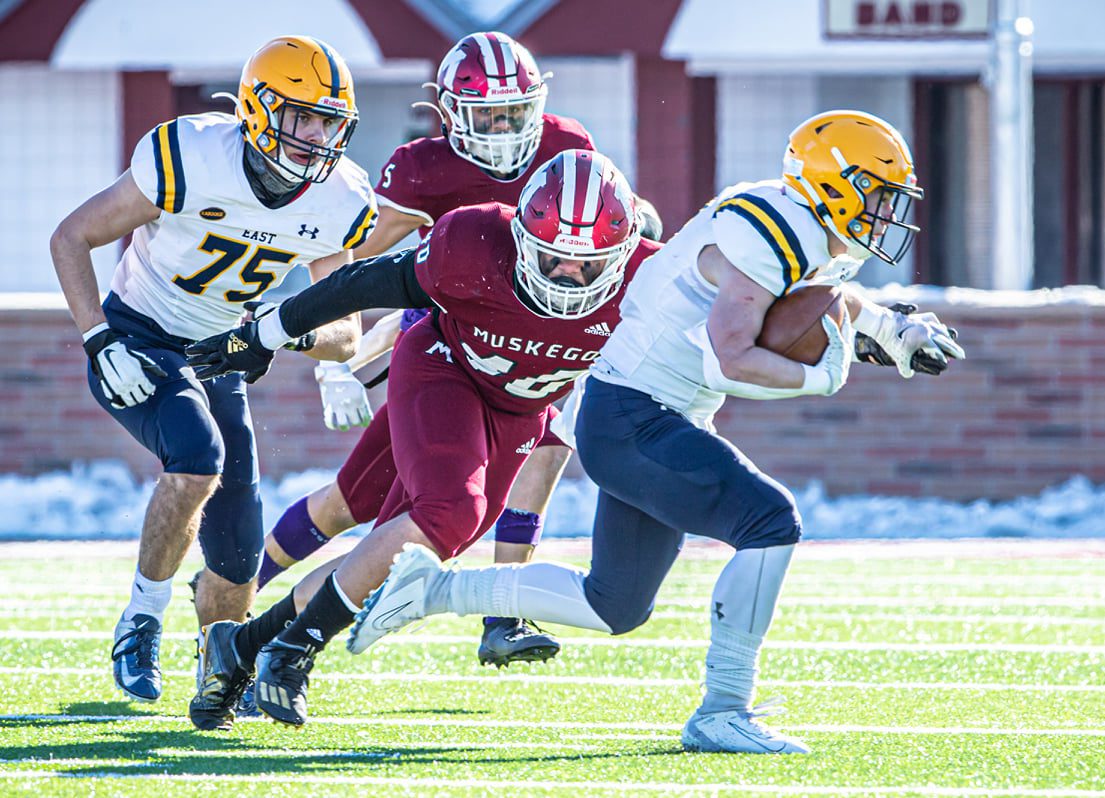 “You never want to lose a game, but it had been four or five years since we had lost a regular season game,” the coach said. “You get to the point where you are going through the motions of another regular season, another win, and sometimes you can learn a lot from a loss. It knocks you down. You think ‘this is not normal.’ It makes you refocus, because you don’t want to have to feel that way again.”

The new sense of urgency has been obvious since the close call against Zeeland West. Muskegon followed that game with a 56-14 win over Grand Rapids Union in the last game of the regular season, then plowed to playoff wins over Greenville (56-7), Cedar Springs (34-12), Marquette (47-21) and East Grand Rapids 24-0 last Saturday in the regional finals.

Now comes DeWitt in Saturday’s semifinals, and the Panthers will be a major challenge.

The Big Reds have beaten DeWitt twice in the playoffs in recent seasons, but last year’s game, in the state semifinals, made Muskegon fans sweat until the end.

The game was tied 21-21 in the fourth quarter. It wasn’t decided until All-State quarterback Cameron Martinez broke loose for a 20-yard touchdown run on fourth down with 2:24 left in the game, giving Muskegon a 28-21 victory.

That DeWitt team has just about everybody back this season, and has been dominant on its way to the semifinal rematch with the Big Reds. Over the course of the season they have outscored opponents 442-50. The 442 points, scored in 10 games so far this season, is 14 more than they scored in 13 games last season. 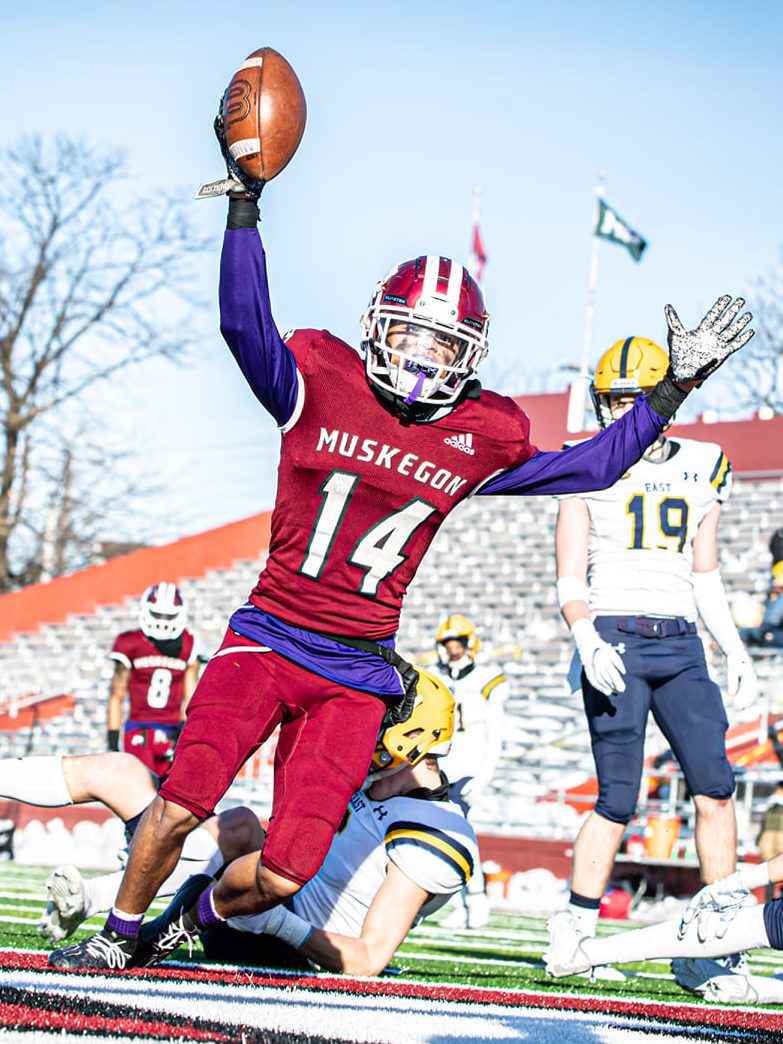 The Panthers have yet to be scored on in the playoffs, beating Flint Northwestern 55-0, Lansing Waverly 52-0 and Mason 43-0.

They had four first-team Division 3 All-State selections, including quarterback Tyler Holtz, wide receiver Tommy McIntosh and linebackers Andrew Debri and Grant Uyl. Holtz was named the Division 3 Player of the Year by the Associated Press after throwing for 2,109 yards and 32 touchdowns with only one interception.

“They are all back this year, and they are loaded,” Fairfield said about DeWitt. “They are long, big up front, and big defensively. They have nine returning starters on defense and seven or eight on offense. This is the team they’ve pinned all of their hopes on. They are a championship team, and we like having the opportunity to play them.”

The Big Reds will not be intimidated, particularly after emerging from the long COVID break to beat a good East Grand Rapids team in last Saturday’s regional finals.

The performance was happily surprising, considering Muskegon had not taken the field since the Nov. 14 district finals. Senior quarterback Amari Crowley completed 11 of 13 passes, including two touchdown throws to leading receiver Jeremiah Dault. Kitchen rushed for 120 yards, and the defense posted its first shutout of the season.

“That win will go down as one of the most exciting wins of my career, considering how long it had been since we played and everything the kids have gone through this year,” Fairfield said. “It was the way they flew around and played with energy and passion, and never missed a beat.”

Simply playing the game will benefit the Big Reds against DeWitt, because the Panthers have not played since Nov. 13, when they beat Mason in the district finals. They did not play last Saturday because their regional opponent, Stevensville Lakeshore, forfeited.

Fairfield doesn’t think the lack of recent playing time will hurt DeWitt, but he does think having the chance to limber up against a live opponent will benefit the Big Reds.

“It would be tough for us to play DeWitt if we hadn’t had a game,” the coach said.