After a string of nail-biting playoff wins, Mona Shores is ready for anything in Saturday’s semifinal against TC Central

NORTON SHORES – Maybe, in some ways, it’s good that the Mona Shores football team had a long break during its state playoff run.

If all the games had come one after the other, head coach Matt Koziak and everyone else in Sailor Nation might have shot nerves by now. 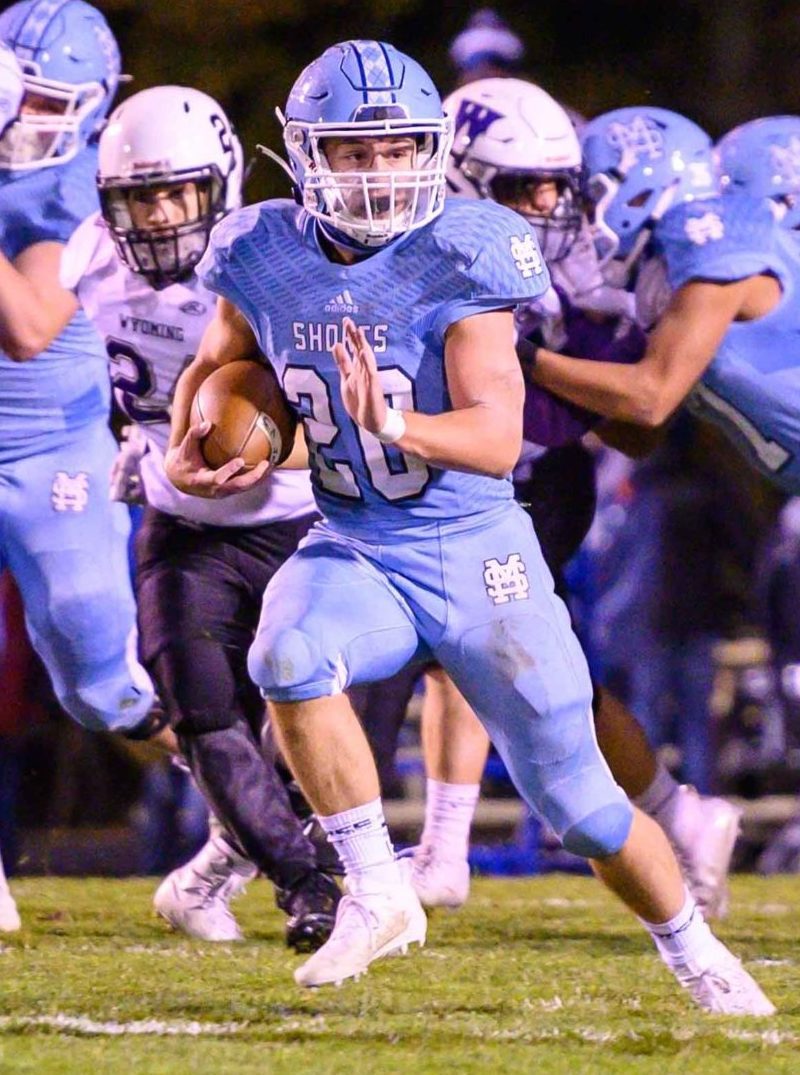 Elijah Johnson breaks through a big hole up the middle. Photo/Eric Sturr

Mona Shores, attempting to win its second straight Division 2 state championship, has survived the last three playoff games by pulling out wins at the last minute, by the skin of its teeth.

Now the Sailors (10-0), presumably brimming with confidence by the success of their never-say-die approach, will host Traverse City Central (9-1) on Saturday at 1 p.m. in the state semifinals, with the winner earning a berth in the state finals on Jan. 22 at Ford Field in Detroit.

There’s no doubt that everyone will be braced for another nail-biter.

“I told somebody, I may have a stroke in my 50s,” said Koziak, whose team has won the last three playoff games by a combined 14 points. “The last three games have been nutty, and last year in our playoff run there were some nutty games. To have them over and over and over doesn’t get any easier.”

Here’s a quick review of the exciting way the Sailors have advanced to the semifinals.

It started in the second round of districts against Forest Hills Central on Nov. 6. The Sailors overcame a 10-point deficit and led 28-25 late in the game. FH Central drove to the Mona Shores 26-yard line with nine seconds remaining. The Rangers completed a pass, and the receiver made it to the one-yard line before he was hauled down by Sailor All-State defensive back Keondre Pierce as the clock expired.

The next week, against huge underdog Caledonia, the game was tied 35-35 with 6:01 remaining following a 44-yard touchdown run by the Fighting Scots. But the Sailors answered with a late scoring drive, capped by quarterback Brady Rose’s 13-yard TD scamper, then got a two-point conversion to escape with a 43-35 victory. 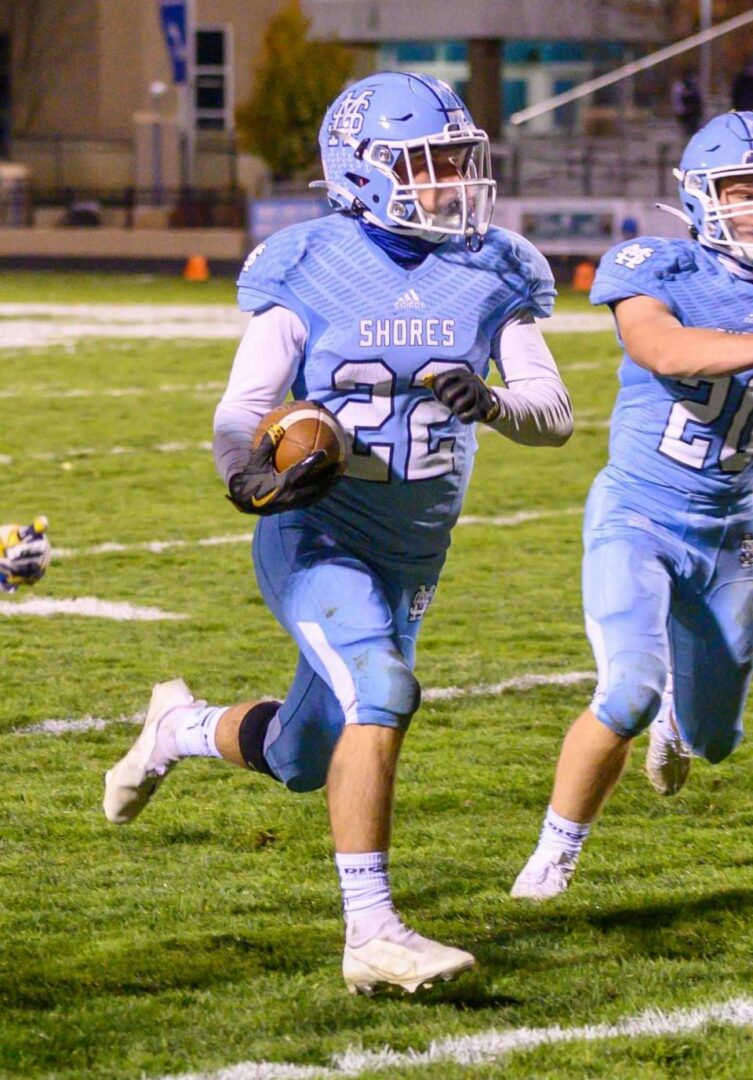 Brady Rose returns an interception to the house for a Sailor touchdown during the Sailors’ opening round win over Wyoming. Photo/Eric Sturr

The latest miracle happened last Saturday at East Lansing in the regional finals. The game was tied 21-21 with 4:12 to play. Mona Shores got the ball after an East Lansing touchdown but ended up punting. The home team drove to midfield, before the Sailors’ DJ Caviness intercepted a pass and returned it to the East Lansing 28-yard line with 12 seconds left on the clock.

A pair of runs by Rose, followed by timeouts, got the Sailors down to the 7-yard line with 2.8 seconds left. Then field goal kicker Keegan DeKuiper nailed a 24-yarder as time expirecd to give the Sailors a 24-21 win.

You can definitely label them the “refuse-to-lose Sailors,” because they calmly respond to tense moments by keeping their heads and finding a way to win.

Some people say the Sailors have been incredibly lucky, and their luck is bound to run out. Others say they have been pushed, tested and survived, proving they are a team of destiny.

How does Koziak see it?

“We’ve really gotten everybody’s best shot, which comes with the territory,” the coach said. “It’s easy for opponents to get up when they are playing the state champions. We always get other teams’ best punch. But these guys never give up.

“Rather than refuse to lose, I would say it’s more refuse to give up. These guys know, until the clock hits zero they’re going to play hard and give us everything they have. That was definitely proven last Saturday.”

So where do the Sailors get the kind of drive to keep squeaking past good teams, game after game?

“They are a close-knit group,” Koziak said. “I always tell them, the word ‘special’ does not do them justice. They play hard, and they play for each other. I think it comes down to each individual loving the guy next to them, and not wanting to let them down.”

The Sailors will be facing an opponent on Saturday with a strong local connection. The Trojans are coached by Eric Schugars, the son of legendary Oakridge Coach Jack Schugars, who is on staff as the special teams coach. 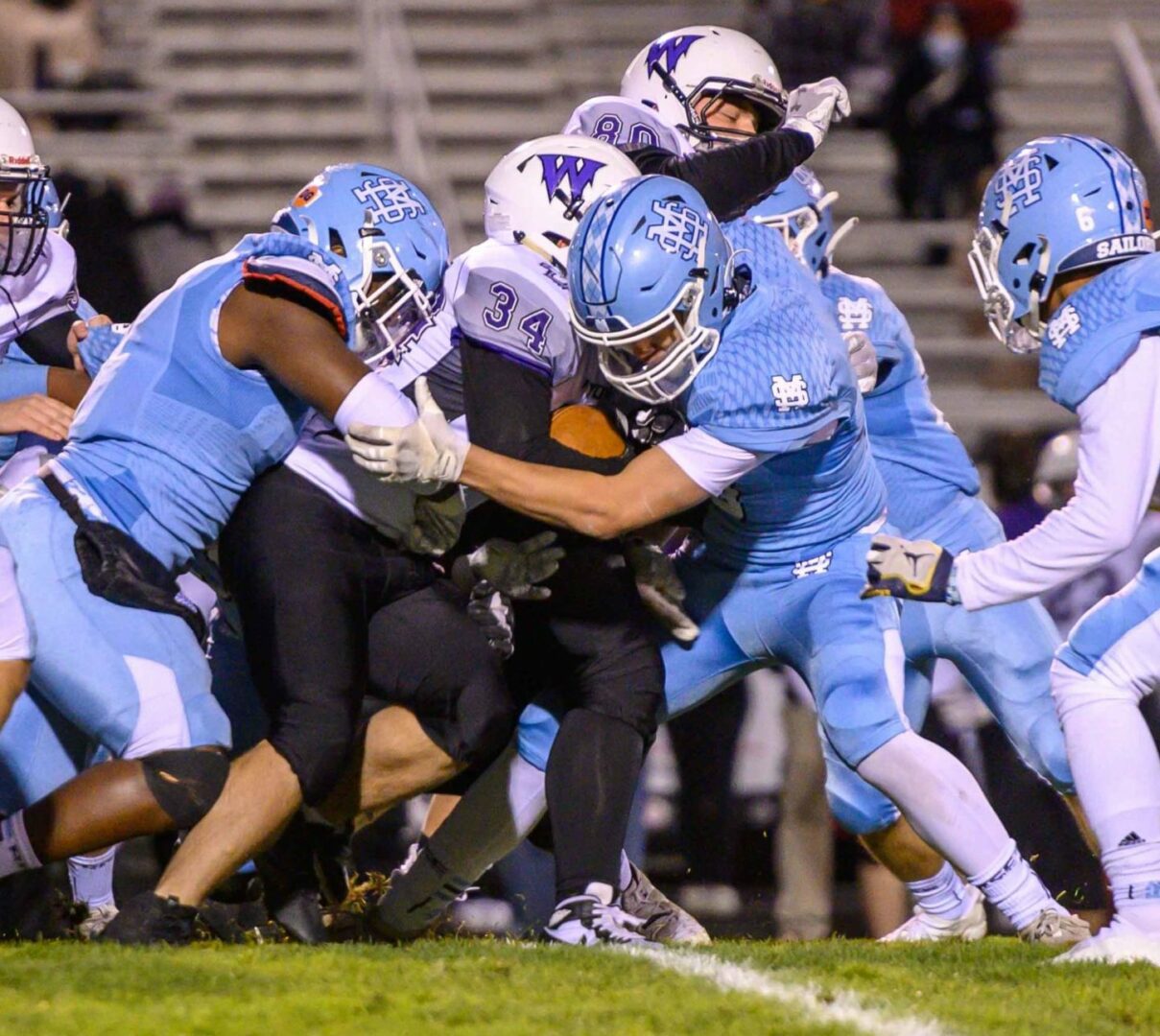 The all-time series between the teams has been very one-sided, with the Sailors losing 17 of 18 meetings. But all of those games were in the last century, and many, if not all, were played when both schools were members of the old Lake Michigan Athletic Conference.

Traverse City Central features two All-Staters in its lineup – linebacker Josh Burnham and defensive back Carson Bourdo. Burnham, only a junior, has received many scholarship offers for his defensive play, including one from NCAA Division 1 national champion Alabama.

Burnham also starts at quarterback, and is the Trojans’ main weapon. Before the regional round, he had thrown for 1,145 yards and 16 touchdowns, and ran for 844 yards and 13 touchdowns.

“He’s a great player,” Koziak said about Burnham. “They do a great job of spreading the ball around, but he is definitely the focal point for us because he is so talented.”

Traverse City Central has amassed 486 points this season, the most for the program since 1950, despite the shortened season.

“They are good on both sides of the ball,” Koziak said. “They have an aggressive defense, they will get your face and play man. Offensively they do some creative things and score a lot of points.”

Of course the Sailors can counter with some big weapons of their own, starting with Rose, the senior quarterback and safety who is a strong candidate to win the state’s Mr. Football award this year.

The do-everything-great Rose has rushed for 1,127 yards and 19 touchdowns and passed for 922 yards and 10 TDs. He is also the team’s leading tackler with 58, and leads the Sailors in interceptions with four.

Mona Shores also has several running backs who can do damage when Rose doesn’t have the ball. They include Elijah Johnson (360 yards, 5 touchdowns), Dahmir Farnum (425 yards, 6 TDs) and Elijah Farnum (333 yards, 3 TDs).

The other tackling leaders are Caviness with 56, Jeff Lenardowicz with 45, Johnson with 44, Khyree Hamel with 42 and Humphrey with 38.

“I really think it’s going to come down to that day,” Koziak said, regarding the level of talent on both teams. “What a great semifinal matchup – 10-0 vs. 9-1. You can’t get much better than that.”