Lumberjacks battle back against powerful Chicago in home opener, but get burned by two late goals in a 6-5 loss

MUSKEGON – Opponents need to do more than take a late lead against a team like the Chicago Steel.

They have to apply a knockout punch when they have the chance, because the first-place Steel can come back and bite at a moment’s notice.

The Muskegon Lumberjacks learned that the hard way on Saturday night in their season home opener against the Steel at Mercy Health Arena. The Jacks overcame a bad start to the second period, when three quick Chicago goals put them down 4-2, and managed to rally and take a 5-4 lead late into the contest.

But the Steel struck back in the end, collecting two goals in the final 2:43 to swipe a 6-5 win over the Lumberjacks in a fast-paced, exciting battle between two of the top teams in the USHL’s Eastern Conference.

The loss was the second straight for the Lumberjacks, who fell to 6-4-1 on the season. They dropped to third place in the Eastern Conference with 13 points, seven behind conference-leading Chicago, which improved to 10-2-0 with 20 points.

The two teams will meet again on Saturday night in Muskegon at 7 p.m. No tickets are being sold due to COVID restrictions.

“At the end of the day, the difference is that’s a team that has been winning for a lot of years and they believe in themselves, and that is the kind of group we have to become, instead of hanging on and hoping,” said Lumberjacks Coach Mike Hamilton.

“I am really proud of the way we played. We lost attention to detail in a four-minute span to start the second period, and then in the third period with two-on-fours. Those are details that we have to get better at. No excuse, we sagged.” 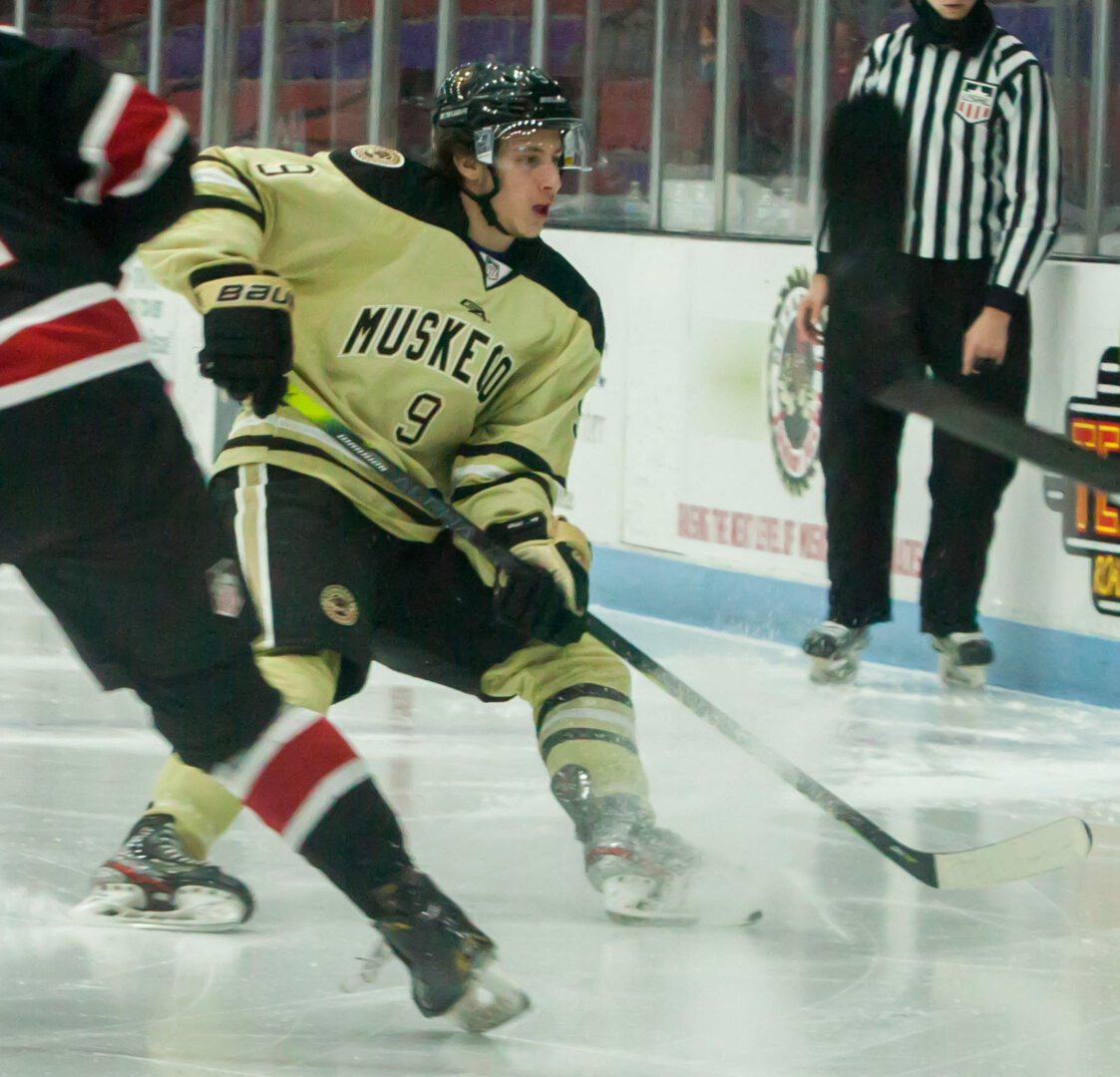 Rhett Pitlick makes a move on the puck for Muskegon. Photo/Jason Goorman

The Lumberjacks opened the scoring with a goal from David Hymovitch just 3:49 into the contest. Chicago’s Ian Moore tied the score with a goal at the 7:05 mark, then Muskegon’s Tanner Kelly collected the first of his two goals at the 8:40 mark, giving the Jacks a 2-1 lead after one period.

The second period started out disastrous for the Lumberjacks. The Steel collected three quick goals in the first 3:07 of the period, from Erik Middendorf, Joe Miller and Matthew Gleason, and suddenly had a 4-2 lead.

Hamilton called a time-out after the third goal, and could be seen from the bench giving his team a loud and pointed message. The Jacks responded, stiffening up on defense to slow the Chicago attack, and getting a pair of power play goals from Jack Williams at the 12:18 mark and Kelly at 18:09, to leave the game tied 4-4 after two periods.

Despite the horrible start, Muskegon outshot Chicago 13-8 in the second period.

“I just had to get the guys to refocus, and the best part is that we battled back,” Hamilton said about his passionate speech after the three-goal collapse.

The Lumberjacks scored a go-ahead goal at 3:39 of the third period when captain Dylan Wendt sent a backhander from close range into the Chicago net.

The lead held up almost until the end, but Chicago was not done. Josh Doan scored at the 17:17 mark to tie the game, then Sean Farrell notched the game-winner at 18:40. The Jacks pulled their goalie for an extra attacker the rest of the way, but failed to cash in. 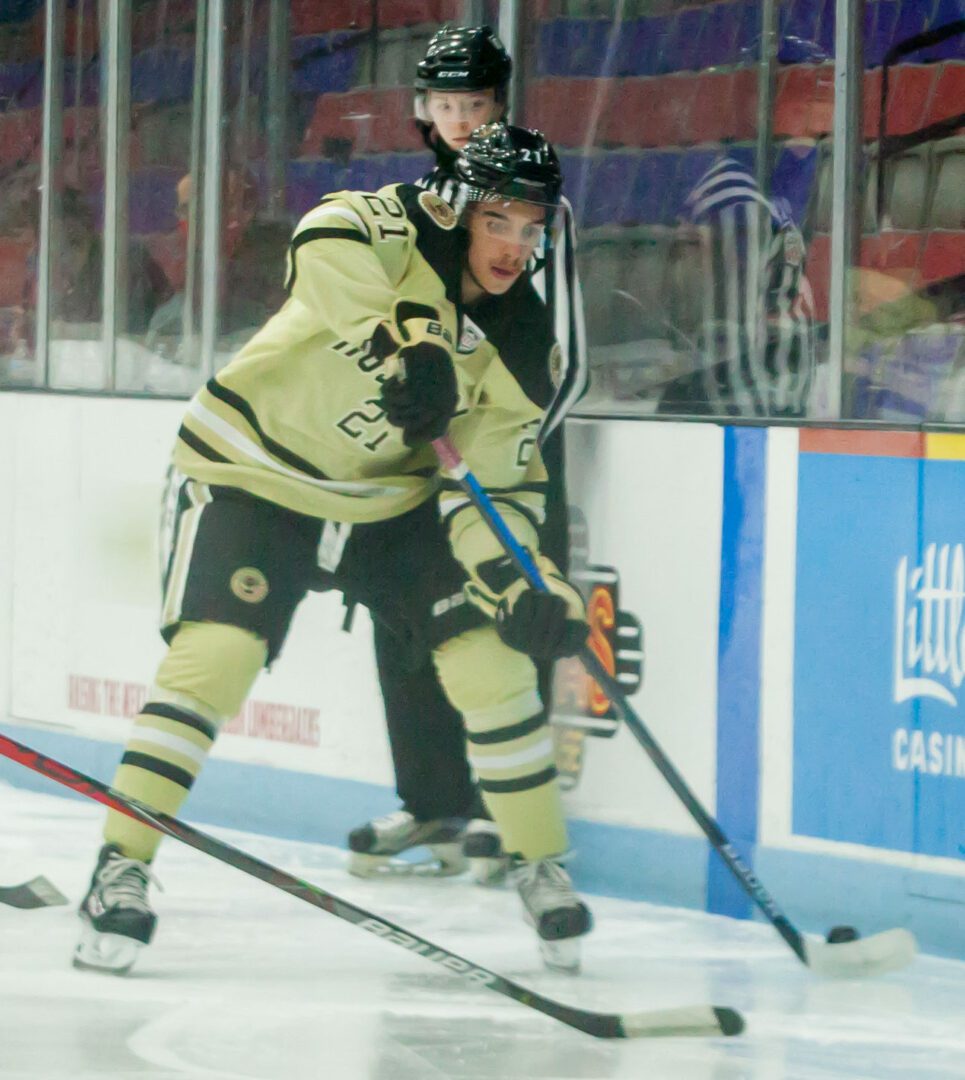 No. 21 Cristophe Tellier moves the puck along the boards for Muskegon. Photo/Jason Goorman

“I think tonight we were the better team, but we just have to finish,” said Hamilton, whose team was burned by two shots that hit the post of the Chicago goal and bounced harmlessly away.

The Lumberjacks had a 36-22 advantage in shots on goal. Chicago goalie Nick Haas stopped 31 shots to collect the win. Muskegon goalie Jan Skorpik, who made several impressive saves against the powerful Steel, stopped 16 shots.

Cristophe Tellier had two assists for the Lumberjacks while Alex Gagne, Bradley Marek, Jacob Guevin, Danil Gushchin and Davis Pennington each had one.

Owen Mehlenbacher pinches the puck along the boards for Muskegon. Photo/Jason Goorman

Owen Mehlenbacher pinches the puck along the boards for Muskegon. Photo/Jason Goorman

Muskegon defenseman No. 18 Owen Mehlembacher makes a move on the puck. Photo/Jason Goorman

John Druskinis gets ready to wrist a shot for Muskegon. Photo/Jason Goorman

No. 21 Cristophe Tellier moves the puck along the boards for Muskegon. Photo/Jason Goorman

Quin Hutson controls the puck along the boards for Muskegon with No. 21 Cristophe Tellier. Photo/Jason Goorman