GRANDVILLE – The Mona Shores soccer team has eight seniors this year, and they were a determined crew during Wednesday night’s

The game was very tight, and scoreless at halftime, but the Sailors kept battling and playing great defense, and finally emerged with a 1-0 victory over Rockford to earn their team’s first district championship in memory. 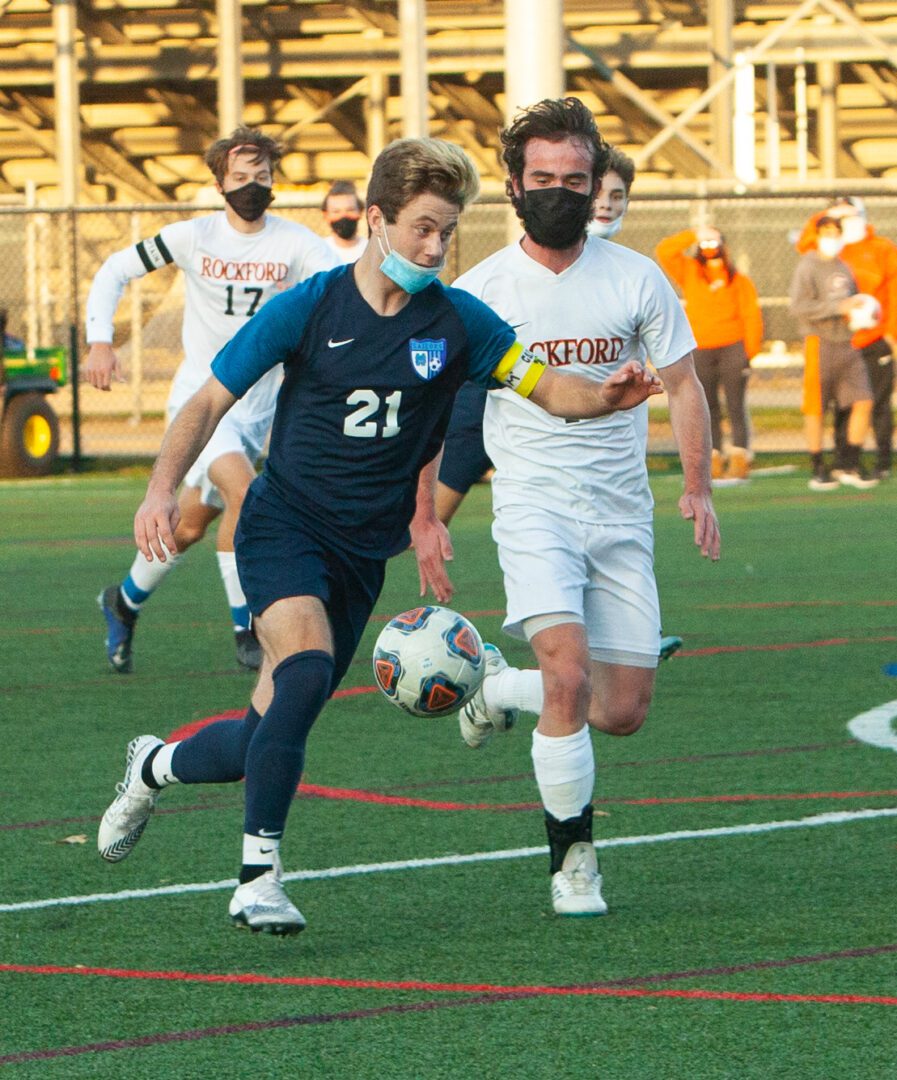 No. 21 Hayden Yaros gets ready to volley a shot on goal during the first half of play for Mona Shores. Photo/Jason Goorman

Before last week, the Sailors hadn’t won a single district tournament game since 2014.

The Sailors were outshot 8-2 in the game, but it was Mona Shores senior Hayden Yaros who had the one shot that found the back of the net.

Yaros got the ball just past midfield and broke loose before deking out the Rockford goaltender 1-on-1 and scoring with just over three minutes gone in the second half.

“I just wanted it,” said Yaros about his goal. “I wanted to get the goal and put our team up. I got the chance and was fortunate enough to find the back of the net.”

Rockford had four corner kicks and three shots on goal over the final 36-plus minutes, but Mona Shores goalkeeper Keegan DeKuiper and his defense held the shutout.

“Every time they touch the ball you’re scared,” said Apostle about the offensive threat posed by Rockford. “Keegan and the whole back end of our team has been excellent and unreal.”

“It feels really good,” DeKuiper said about setting the record in such a meaningful victory. “It’s four years of hard work. It feels special, especially to break it tonight in the first district title in way too long.”

Mona Shores, now 13-3-1 on the season, advances to the Division 1 regional tournament at Grand Ledge against either Holt or Caledonia on Tuesday at 7 p.m.

“I have no idea,” said a joking Apostle about how long he’ll give his team to celebrate before focusing on next week. “It’s all new to us. We’ll get back to it tomorrow, we’re a pretty humble team.”

After going without a single postseason victory for the first three years of his varsity career, Yaros was excited after the game.

“It’s an amazing feeling,” he said. “It’s been too long. To come out here with my fellow seniors and get the job done is an incredible feeling.”

David McNiff gets ready to send a ball for Mona Shores. Photo/Jason Goorman

Mona Shores’ No. 8 Alex Eckerman gets a foot in front of Lucas Carey. Photo/Jason Goorman

Dan VanderPloeg chews on his mask while waiting for play to resume. Photo/Jason Goorman

Abram Freye controls the possession near the sideline for Mona Shores. Photo/Jason Goorman