MUSKEGON TOWNSHIP – Reeths-Puffer’s Klay Grant enjoys Spikeball, a popular game that involves players hitting a ball back and forth off

But he enjoys cross country even more, and he’s really good at it.

As it turned out, a friendly game of Spikeball with some friends in August ended up adding an extra challenge to his upcoming cross country season. 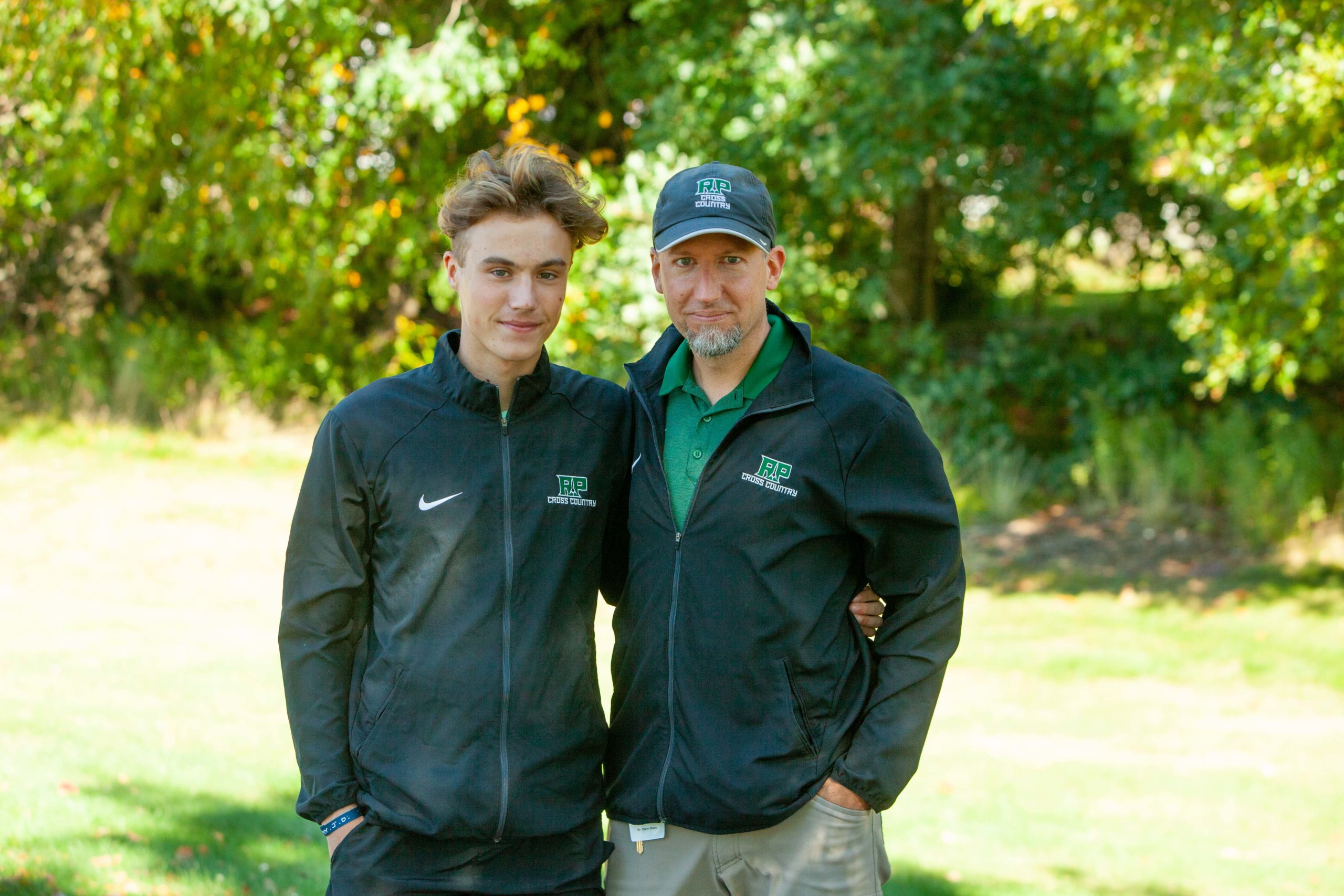 During the game he stepped on some sort of uneven patch of grass and turned his ankle. It started to swell up pretty quickly, and before he knew it he was in a boot and on crutches, just weeks before R-P’s first cross country meet.

It was not a good way for the defending boys city meet champion to kick off his junior season.

“I turned my ankle and it was pretty bad,” Klay said. “I really didn’t know how bad it was initially, until they said I would be on crutches for a while. I was pretty shocked. It was better than if it happened right before regionals, but it was still tough.”

The injury affected his performance in the early meets in August and September, but now as the season heads into the home stretch, Klay is hitting his pace again.

The evidence is his improving performance through the first three O-K Green conference meets of the season.

In the third he took first place with a time of 16:33.22. That race was a little shorter than the usual 5K, but Klay’s progress was evident to everyone.

“That was a strong effort,” said R-P boys cross country coach Darin Grant, who also happens to be Klay’s father, “The course was a little short, but he was smoking it.” 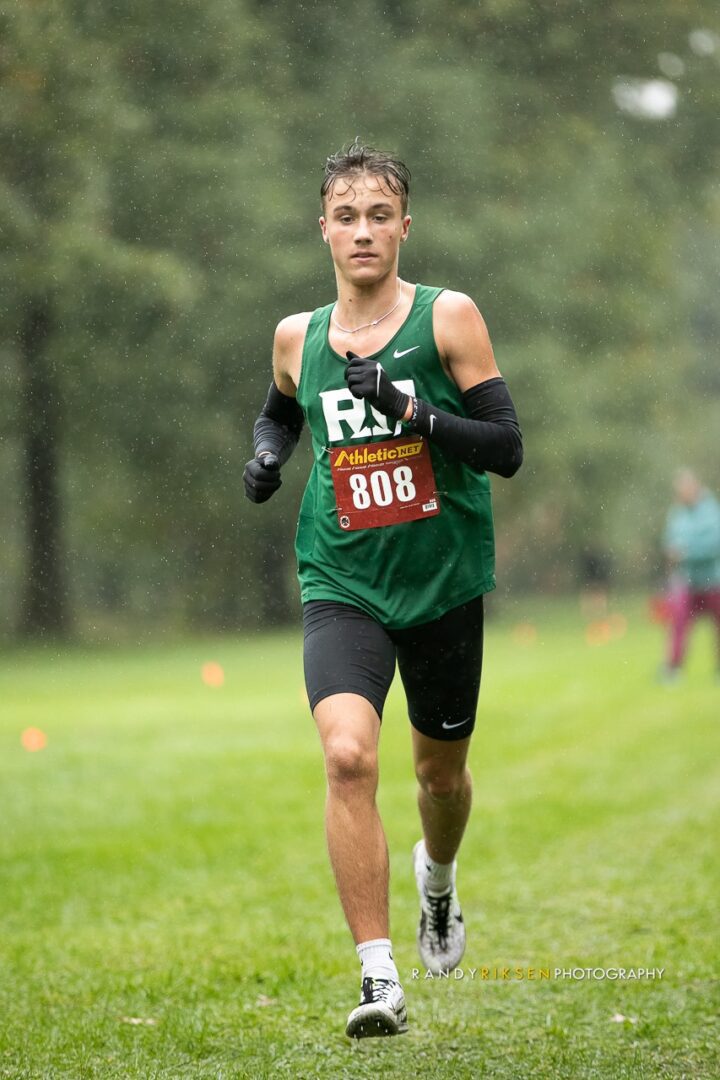 Darin Grant, a 1993 Reeths-Puffer graduate, had no idea what cross country was as a freshman. But he went out for the team as a sophomore and ended up being a state qualifier all three seasons that he ran. He went on to quality for nationals for fourth straight years at Indiana Wesleyan University.

Klay knew about cross county as a freshman, of course, and went out for his dad’s  team. But he also loved soccer and was a starter for the Reeths-Puffer varsity in his first year of high school.

By his sophomore year, however, he decided that two fall sports were too much, so he decided to drop soccer and stick with cross country.

“They never forced me to run,” Klay said. “They always said I didn’t have to if I didn’t want to. But obviously, with the genetics I have and the way I was raised, I wanted to. My dad had an incredible running career, and I want to take after him.”

His decision to focus on the family sport paid off.  Klay is already the fifth fastest runner in Reeths-Puffer cross country history with a personal best time of 15:54.

He has the second fastest time in school history among freshmen, the best time ever among sophomores, and currently has the seventh best time for juniors.

One long-ago junior he still has to overtake is his father, whose best time during his junior year was 25 seconds faster than Klay’s best time this year. But everyone, including his dad, is confident that he will.

“I wouldn’t want it any other way,” Coach Grant said.

Last season Klay was the boys champion at the Greater Muskegon Athletic Association City Cross Country meet, and went on to finish sixth at regionals and qualify for the state finals in Brooklyn, Michigan.

He didn’t have a great day at the state meet, but got a taste of what it’s like to face the top competition in Michigan. That whetted his appetite to do better this season.

“I will definitely know what I’m getting into a little better this time,” Klay said. “I’m hoping to make All-State, but if not I at least plan to leave everything I have out there.” 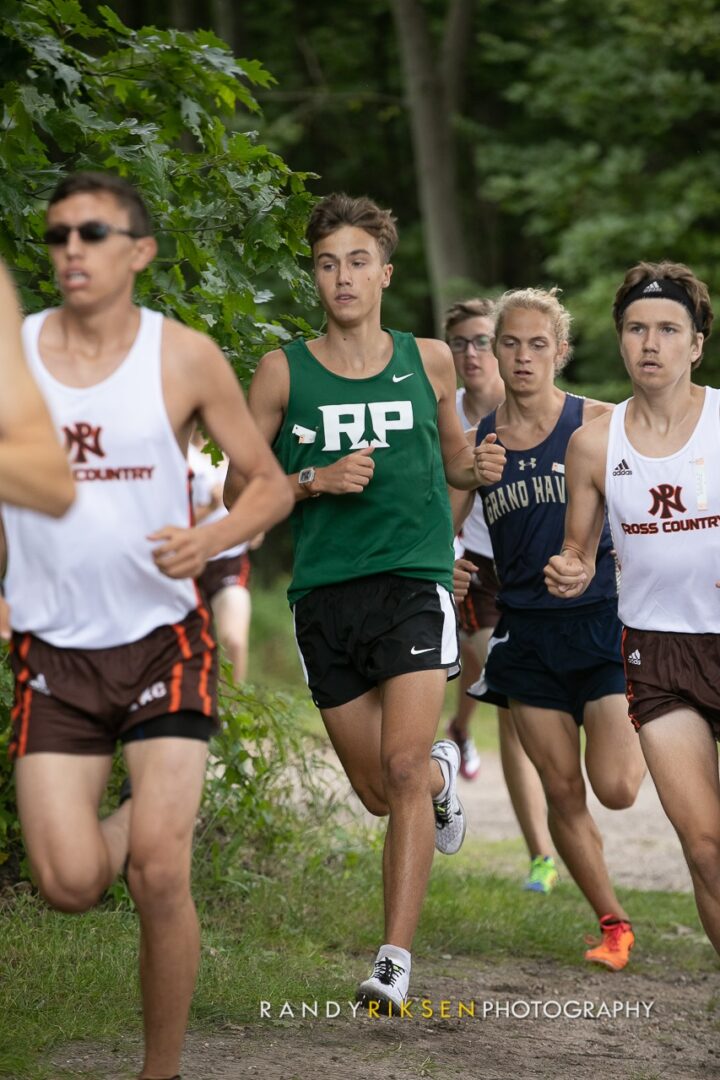 Klay Grant turns a corner in an event earlier this season. Photo/Randy Riksen

Klay will try to defend his city title at the GMAA meet at Muskegon Community College on Oct. 17, before he turns his attention to regionals and the state finals again. He knows he will face some tough local runners, including Mona Shores’ Jackson Helmer, who has been his fierce rival and friend since middle school.

“Jackson is always fun to race against,” said Klay, who finished first in his most recent race last weekend at the Allendale Invitational. “We have gone back and forth a lot already this season. He beat me quite a few times when I was coming out of my injury, and the last few times I think I’ve gotten the better of him.”

The city meet will also be a big day for the Rockets as a team, because they have a pretty strong overall lineup,  They won their division at Saturday’s Allendale meet, and have beaten rival Mona Shores in two of three showdowns this season.

“We have a young team, with four returning athletes and six rookies,” Coach Grant said. “Some are upperclassmen who have never run before. With that young of a team you are still learning to race. At Allendale I told them to keep it under control for the first mile, pick it up in the second mile, and finish it in the third.

“It’s hard to be in back at first, when everyone else goes hard, but they are learning to believe in themselves. They are constantly growing, constantly getting better.”

Like his teammates, Klay is pushing  hard to continue to improve –  but he still won’t promise to stay away from Spikeball during the cross country season. And nobody, including his dad, expects him to.

“I’ve actually still been playing it a little bit,” he admitted with a grin. “Cross country isn’t everything. I still care about hanging out with my friends and having fun.”