MONTAGUE – Every team in every sport hopes to be playing its best at tournament time.

The Montague girls golf team definitely accomplished that over the past two weeks, and it ended up paying really big dividends. 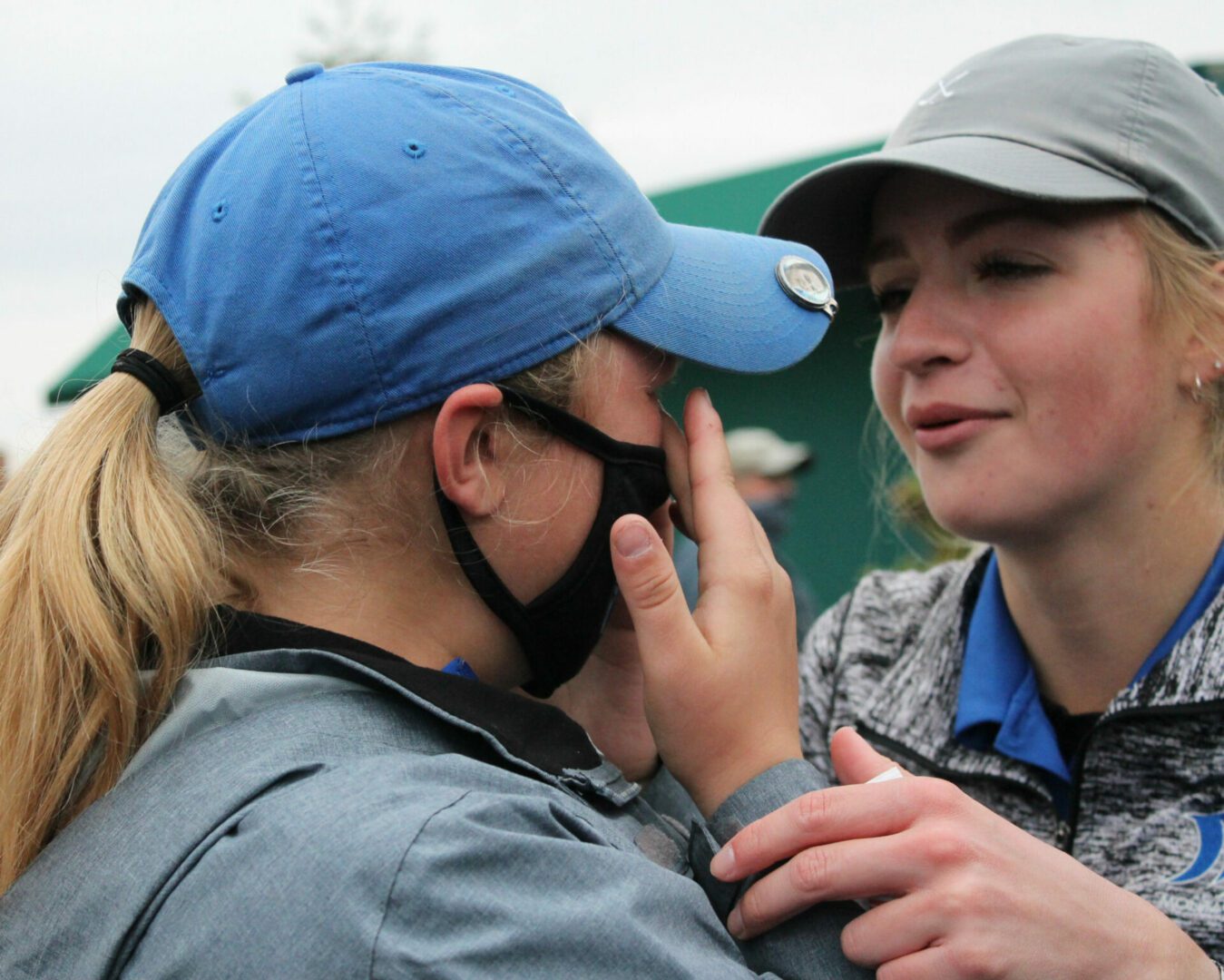 Katie Unger wipes away her tears after hugging teammate Megan Brown. The state championship win was full of emotions for the young Wildcat program and players. Photo/Latisha Mikkelsen

The Wildcats got very hot at the end of the season, breaking their program’s all-time best team score in each of their last three tournaments.

The last of those great performance came on Saturday, when the Wildcats shot an all-time team low score of 343 and won the Division 3 state championship tournament at Forest Akers West golf course on the campus of Michigan State University.

That was the climax of a steady climb that put an exclamation mark on an already great season.

The hot streak started on Oct. 5, when the Wildcats won the Division 4 regional tournament at Grand Traverse Resort. They shot a team score of 351, which was a new team record that only lasted a week.

Last Monday, they finished second at the Traverse City Central Invitational, and set yet another new team record with a score of 346.

That lasted less than a week, because the Wildcats roared out of the gates at the state finals on Saturday and swept to the championship, beating second-place Lansing Catholic by 27 shots, 343-370.

Of course the 343 was once again a new team record – one that just might stand for quite a long time. 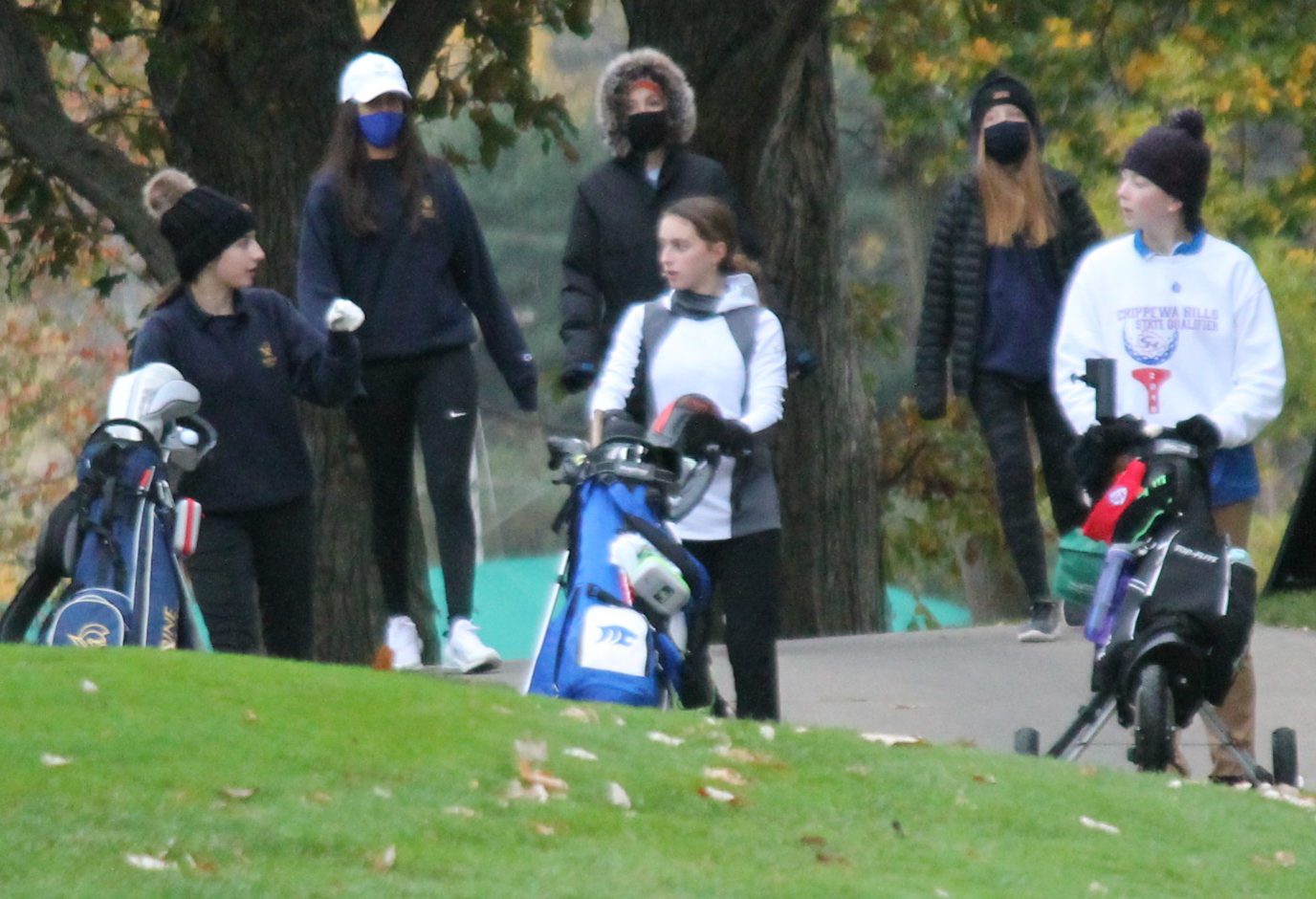 “We just peaked at the right time,” said Montague coach Phil Kerr, who started the girls golf program at the school in 2016. “One of our goals at the beginning of the year was to shoot in the 340s as a team, and we hadn’t done it (before regionals). We hadn’t reached our full potential. We were saving it, I guess!”

What’s really remarkable about Montague is that it has no single star player carried the load. The Wildcats had a very balanced lineup all season, with several players usually finishing near the top in most of their tournaments all season.

That was illustrated in their last three events, when they kept setting new team records.

At the Division 4 regional tournament, senior Megan Brown led the Wildcats with a score of 87, while was good for third place in the individual competition. Orianna Bylsma, Gabriella Moreau and Mackaezie Goudreau all shot 88s  to tie for fourth, while Kate Unger shot a 95, which was good for eighth overall.

Goudreau, a freshman, had the top score last Monday at the TC Central Invitational with a personal best 83, which put her in third place in the individual competition. Brown shot an 84 and placed fourth overall, Bylsma took seventh with an 89 and Moreau took ninth with a 90. 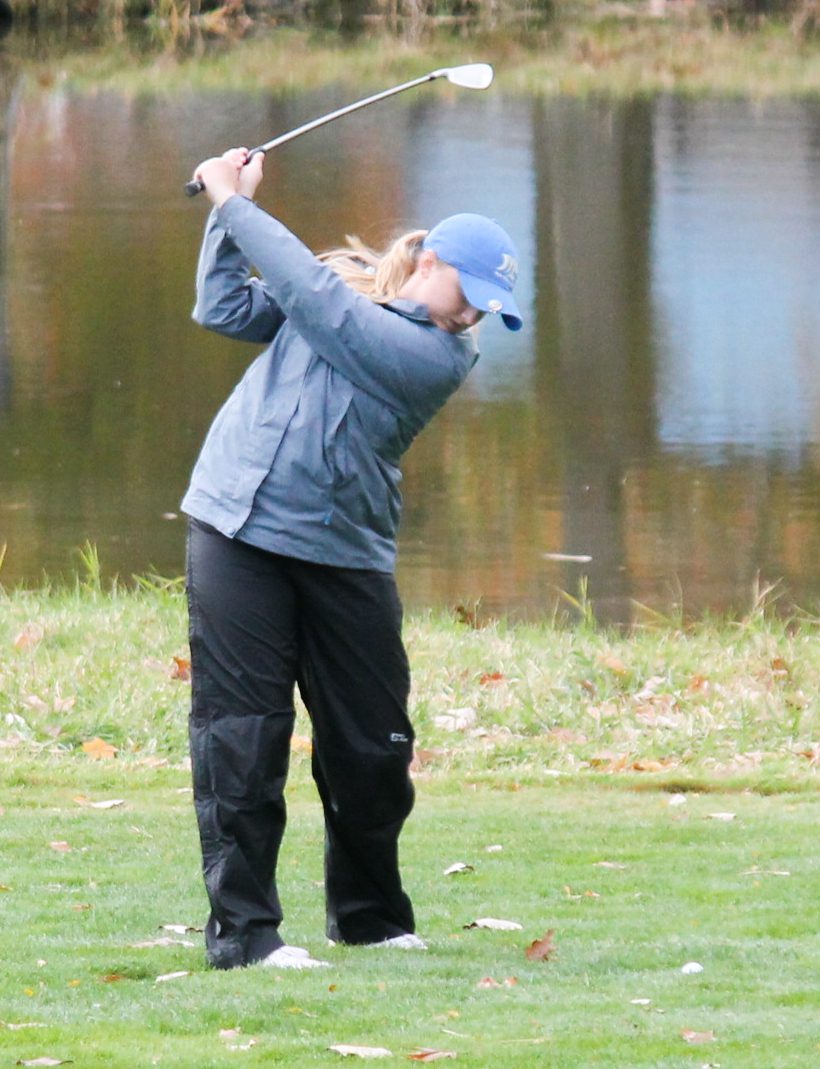 Katie Unger gets ready to use her iron for Montague. Photo/Latisha Mikkelsen

It was Bylsma’s turn to lead the pack at the state finals, shaking off a slow start to shoot a team-high 81 and place fifth in the tournament individually.

Brown finished with a score of 84, which was good for eighth individually. Unger shot an 88 (12th place), while Goudreau and Moreau each shot a 90 and finished tied for 16th place.

“The girls have all done it together,” Coach Kerr said. “It’s a credit to their belief in one another. Our program is just deep, and to have all the girls finish in the top 20 in the state is impressive.”

That kind of depth came in handy during the regular season, when the Wildcats posted a 4-0 record in dual meet and tri-meet competition.

They also gained good experience by playing in several tournaments against some of the top teams from much bigger schools in the state. They didn’t win those events, but always did well and gained a lot of confidence along the way.

“We came in second to Forest Hills Northern, a three-time state champ in Division 2,” Kerr noted. “In other events we went up against powers like Traverse City West and Grand Rapids South Christian. We definitely got out of our comfort zone and beefed up the schedule, and I think that paid off huge for the girls.”

Word about Saturday’s state championship got back to the city of Montague before the team did. When they pulled back into town on Saturday evening, they received the royal welcome from a proud community.

“Montague is pretty close-knit, and they brought us into town with fire trucks, a police escort and people cheering in the streets,” Kerr said. “I know I stayed up late that night trying to answer a bunch of congratulations texts. We got lots of love from the community up here.”