NORTON SHORES – If you met him in person, you might not guess that Mona Shores’ Drew Hackney is a high school freshman.

At 5-foot-5  and 14-years-old, he’s still pretty small, and could easily pass for a middle school student.

If you only looked at his tennis record, you would probably assume that Hackney is a junior or senior, because he’s already that good. 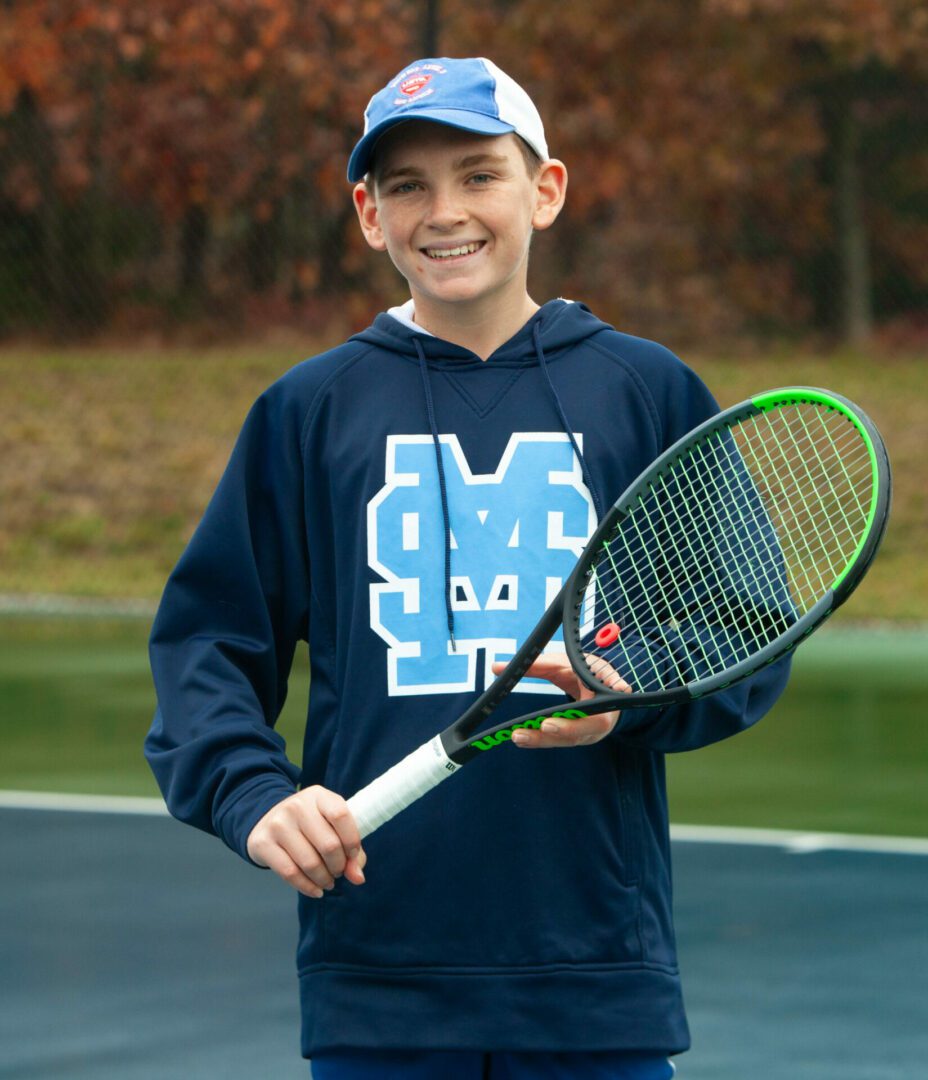 Before last weekend, Hackney had already played a very impressive first season of varsity tennis, posting a 21-5 record, winning the No. 1 singles championship at the O-K Green conference tournament, and the No. 1 singles title at the Greater Muskegon Athletic Association City Tournament.

But his biggest honor came when he was deemed to be one of the best high school singles players in the state, and was invited to compete in the Michigan High School Athletic Association Division 2 state tournament on Oct. 23-24 at Lansing Waverly High School.

In normal years, players earned the right to compete in the state finals by playing great at regional tournaments. This year, due to COVID, the players were selected based on how they performed during the regular season.

“There was a seeding form,” said Traci Hackney, who is Drew’s mother and the Mona Shores boys tennis coach. “It involved MHSAA officials and the tennis coaches association. You have to plug in all the scores into tennis reporting, and they have a rating system. They compared strength of schedule, wins and losses to create a rating.”

Hackney was one of eight players selected to compete for the Division 2 state title. He lost his first match last Friday to eventual state runner-up Nick Herdoiza of Walled Lake Central, 6-2, 6-0, but he was the lone freshman in the field, and everyone at the tournament realized he will be back, probably every year for the next three seasons. 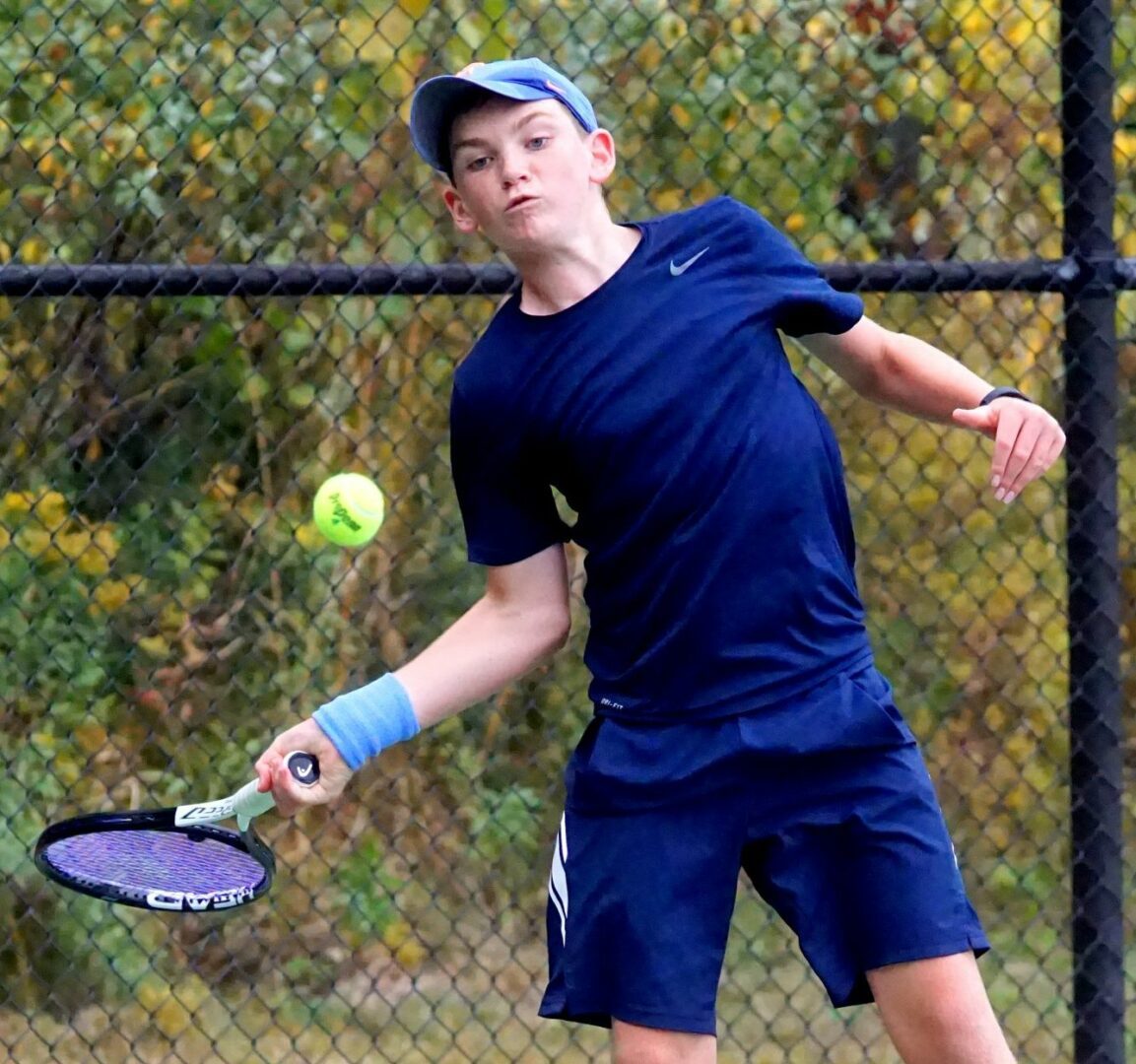 “It was just really cool,” Hackney said about the experience. “I was thinking I wouldn’t even make it in. It was an awesome opportunity. It was a pretty cool accomplishment that I’ll be able to remember.”

Hackney admits he had the jitters in his match on Friday, and said that might have played a role in the outcome.

“It was super fun overall,” he said. “I just think I had some nerves. I thought I handled them well, but it’s tough being in a new situation. I think if I get there again, I’ll be a little less nervous. But it was pretty good overall and I think I found some things I can improve on.”

Part of the experience for Hackney was having his parents guiding him along the way, during the season and the state tournament. Traci is the head coach while his dad, Charlie Hackney, is the assistant coach.

“They did a really good job of being supportive and not too critical,” Hackney said. “If I make a mistake, they’ll give a quick pointer, but they are definitely more positive than anything.”

If Hackney’s name sounds familiar to some sports fans, it’s probably because he and his little brother Reid took the Internet by storm last March when Joe Buck of Fox Sports did a play-by-play voice-over of a video showing them playing “mini tennis” in their basement.

“That was cool,” said Hackney about becoming an overnight internet celebrity. “It was just like a moment. It was just the thing we do in our basement, and it’s crazy how it escalated.” 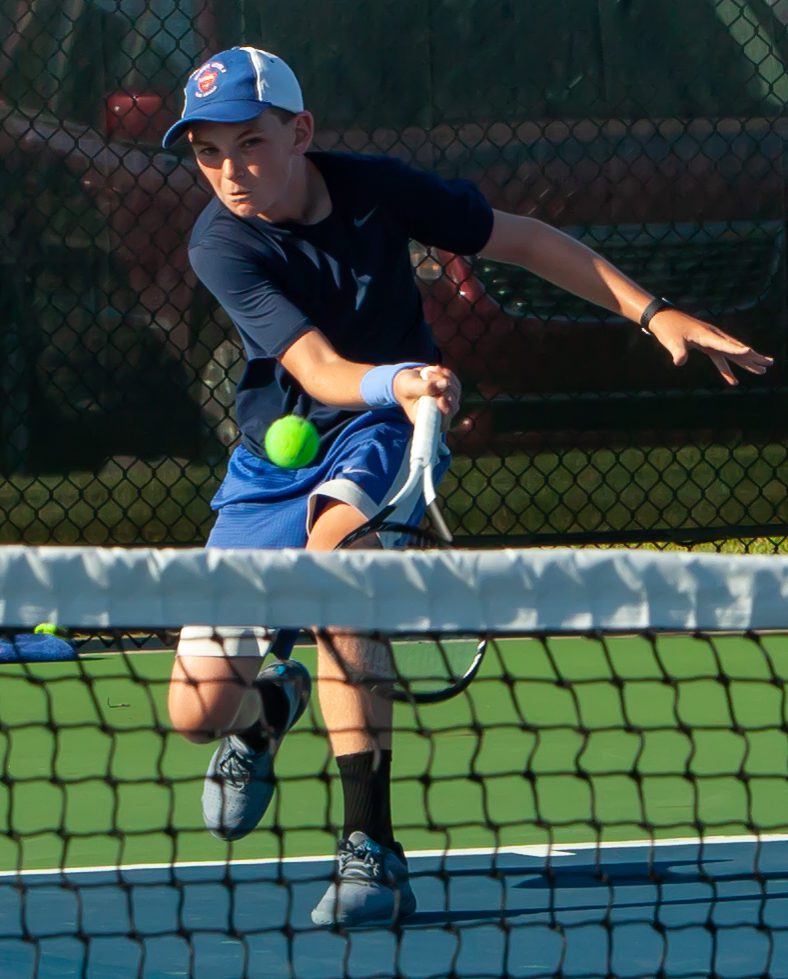 Hackney reaches a ball during his first varsity match in Zeeland. Photo/Jason Goorman

In July, Nike borrowed a clip from the same video to include in its “You Can’t Stop Us” television commercial, which also includes clips of some very famous athletes.

Only Reid actually made it into the commercial, but Hackney said that did not bother him.

“It was a little disappointing, but I just try to think of it as a bonus,” he said. “I’m just glad that one of us was a part of it, so I’m just happy for Reid, and he is always happy for me when I do good things.”

Reid Hackney, by the way, is also a very skilled young tennis player, particularly for a fourth-grader. The two brothers are very competitive with each other –  as the now famous video illustrates – but are also very close.

“I try to be a good example,” Drew said about his relationship with his younger brother. “I think about what I’d want if I had an older brother. I want to show him that everyone makes mistakes, but you learn from it, and just give everything your best.”

Those lessons are often taught in the heat of competition between the brothers.

“We’re very competitive people,” Hackney said. “No matter what the sport, we love competing. But we have a cool relationship, and do a lot of fun stuff together.”

Traci admits her two sons always want to beat each other in sports, but says she never has to worry about things going too far.

“I don’t ever have to worry, but I’ll get annoyed at times,” she said. “They’ll come up arguing over a shot, but I’d say 90 percent of the time they get along. They’re always trying to make sure the other knows how good they are, and it’s not just in tennis.”

That competitive spirit was one of the reasons that Hackney’s teammates on the Mona Shores squad elected him as a team captain this season, despite the fact that he’s only a freshman.

“It’s great to be a leader,” he said. “I like to be looked upon as someone who can help and give advice. I just tried to help my teammates improve, and it was a super awesome year. We accomplished some goals and had a really solid crew.”

While Hackney has already done as well as most high school players could hope to do in a career, he is determined to get better as he gets older and puts on more height and weight.

“I just think as I get bigger and stronger, I’ll have more power,” he said. “My serve will just get better as I get stronger.”