He’s tall and fast, and as he put it, “I can throw the ball a little bit.”

As a junior in 2019, Mansfield started on the offensive line, then moved to tight end. Over the summer he asked new head coach Jason Carpenter if he could take a few snaps as a QB in practice. 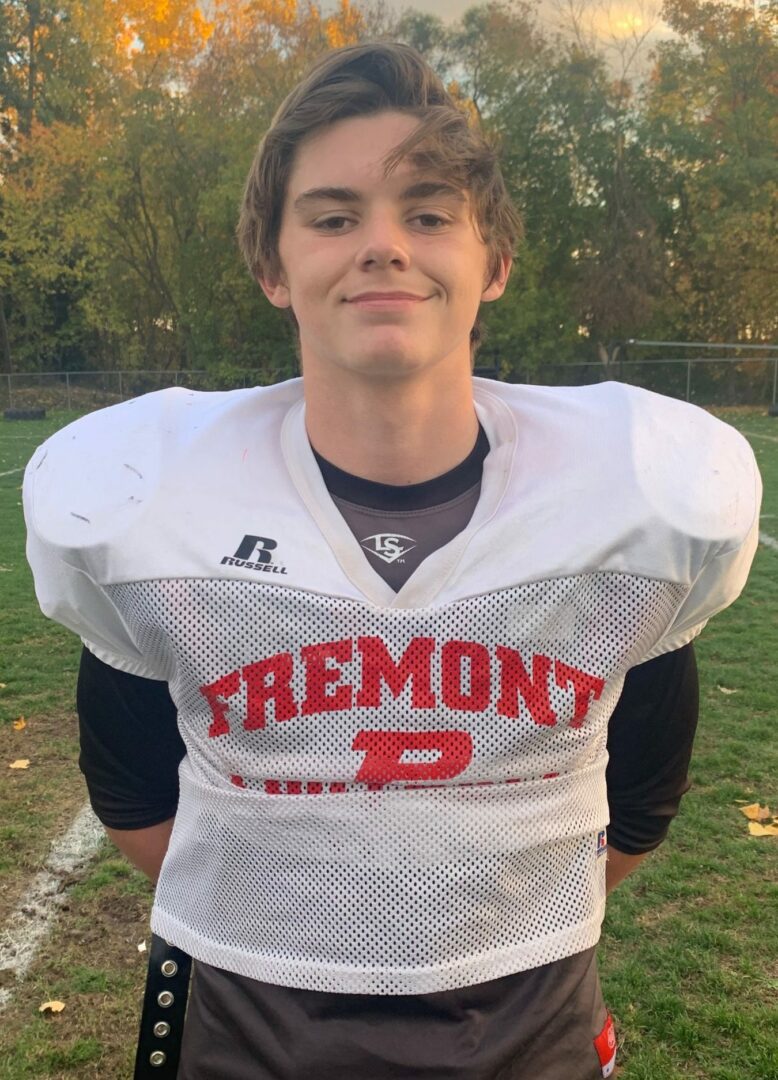 He was given that opportunity, won the starting job, and cashed in big time last Friday, having the type of game that most high school quarterbacks only dream of experiencing.’

Mansfield rushed for 147 yards, passed for 266 yards and scored five touchdowns, including two in the fourth quarter, to nail down an exciting 42-26 victory over Chippewa Hills, which ended Fremont’s painful 17-game losing streak that dated back to Sept. 14, 2018.

Mansfield scored from one yard out in the first quarter, then had touchdown runs of 6 and 45 yards in the second quarter, helping the Packers to a 28-8 halftime lead.

Chippewa Hills scored twice in the third quarter to narrow the score to 28-20, but the Packers weren’t done. Mansfield added touchdown runs of 4 and 37 yards in the fourth quarter to pull away for good.

Fremont’s other touchdown came from Tristen Marfia, who finished with 79 yards on the night.

“It felt good to end the streak,” said Mansfield, who was apparently born to play football, because he was named after Chicago Bears Hall of Fame running back Walter Payton. “The holes the offensive line was creating were amazing, the receivers were catching the ball, all credit to them. We were getting better and better every week, and we finally put all the pieces together.” 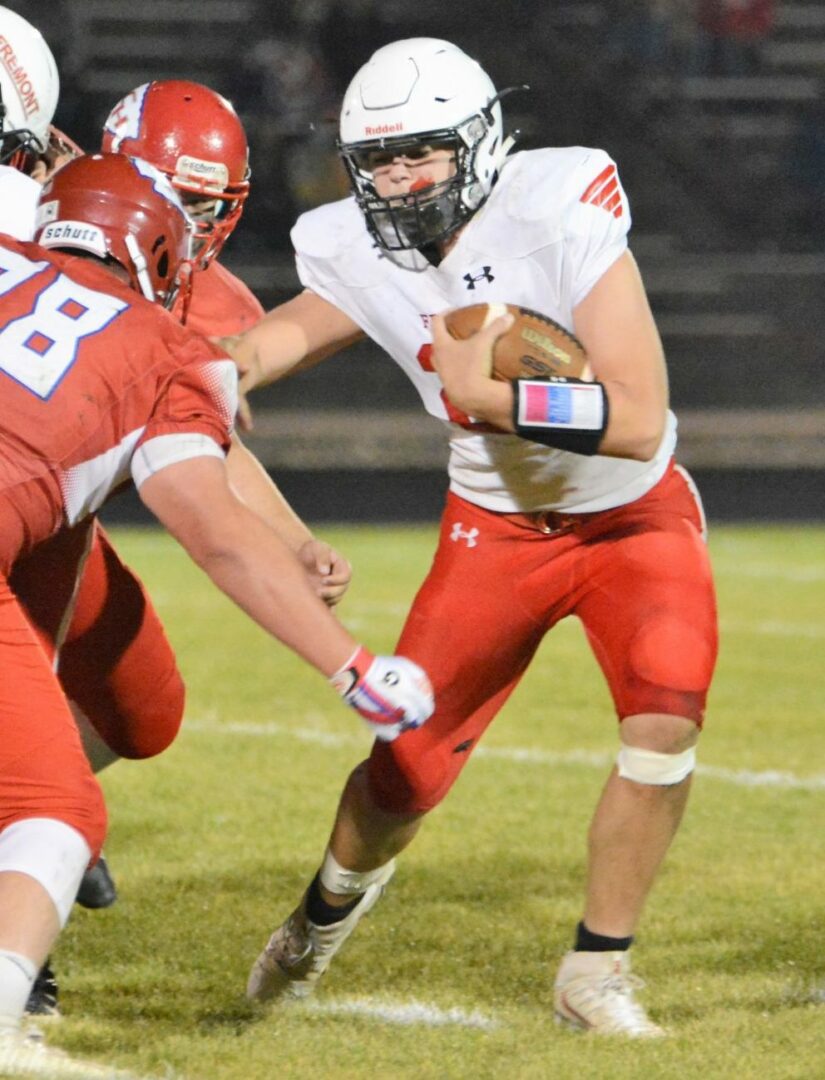 Mansfield looks for room around the edge during the Packers’ Week 4 win. Photo/Renee Hanshue

The Packers started the season with three straight losses, but could taste victory getting closer in recent weeks. They lost their opener 42-14 to Newaygo, and their second game 41-22 to Ludington. But the third game was much closer – a 20-12 loss to Tri-County, and they finally got a W against Chippewa Hills.

“The kids have to understand that this is the standard now,” coach Coach Carpenter, who worked as a head coach in Ohio for nine years, and was the JV coach in Fremont last season.  “We weren’t surprised. Our kids finally executed offensively. We caught the ball, our line did a good job of blocking, and we got five turnovers.

“I’m a little impatient. I thought we had a good shot of beating Newaygo and Tri-County, and we put it all together, finally.”

While he scored all of his points on the ground, Mansfield also kept the offense moving downfield with a great passing game. He completed 19 of 28 throws for 266 yards, including 13 passes that resulted in first downs.

The passing game had been a sore spot in the first three weeks of the season, according to Coach Carpenter. Accurate throws were not being caught, and wide open receivers were sometimes not seeing accurate passes. 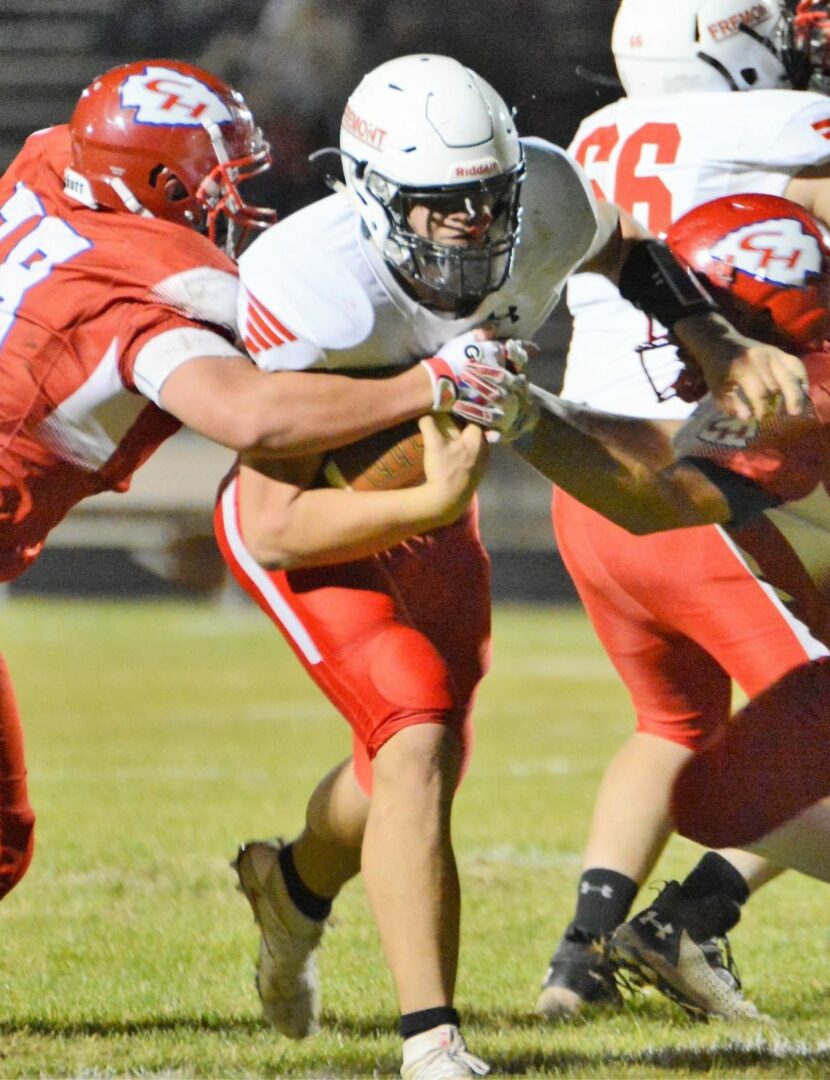 Assistant Coach Tom Threatt addressed that problem before practice one day last week, working exclusively with Mansfield and the receivers to get their timing down, and it obviously paid off.

“Coach Threatt got those guys together before practice, worked on some drills, and it really helped Payton complete some of those passes on Friday,” said Carpenter, whose team produced 491 yards of total offense against Chippewa Hills.

“We had been having too many dropped passes. We had eight versus Tri-County, and seven in Week 1 against Newaygo. Last week we only had two. We have to be 50/50 run-pass to be dynamic offensively.”

The Packers will try to make it two wins in a row on Friday when they take on 4-0 Reed City. They will wrap up the regular season on Oct. 23 against Big Rapids.

After that, they hope to be improved enough to win a few games in the playoffs, since every team qualifies and gets a chance to advance this year.

But whatever happens down the stretch of the season, Mansfield said he and his teammates are having a much better time this year, after going 0-9 last season while being outscored 359-72.

“It was pretty tough to get stomped on every week,” Mansfield said. “But that put a chip on our shoulders going into the summer, then we got a new coach and put in a lot of work. It’s been a lot more fun.”