MUSKEGON – The Muskegon football program has a rich tradition, and part of that tradition is not losing in back-to-back weeks.

It hasn’t happened since 2009, and it didn’t happen on Friday night, despite a shaky start against crosstown and conference rival Reeths-Puffer 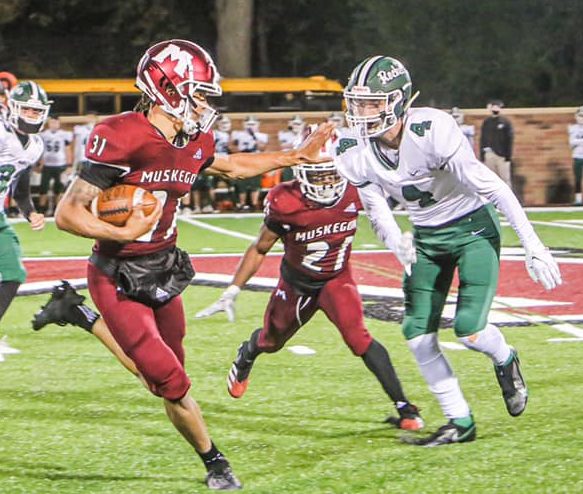 The Big Reds opened up the offense in the second half and walked away with a 39-7 victory over the Rockets at Hackley Stadium.

It was a soothing victory for Muskegon, which fell to Mona Shores last week in its season home opener.

The victory improves the Big Reds to 2-1 overall and 2-1 in the O-K Green conference.

“It’s a credit to our staff,” said Fairfield about his program’s long history of occasional losses that don’t become losing streaks. “It’s also a credit to our kids. We play tough teams and they make us better. Just like Puffer made us better tonight.”

The heavily-favored Big Reds started slow, leading 7-0 after one quarter. The lone first quarter score came through the air on a 10-yard pass from quarterback Amari Crowley to Tyreese Oakes.

Muskegon started the second quarter with a fourth-and-goal situation, and converted on a 10-yard touchdown pass from Crowley to Julius Sims. The PAT gave the Big Reds a 14-0 lead.

But Reeths-Puffer did not crawl away. The Rockets got on the board with 1:49 remaining in the first half on a nine-yard pass from Ben Veihl to Wyatt Kevern. 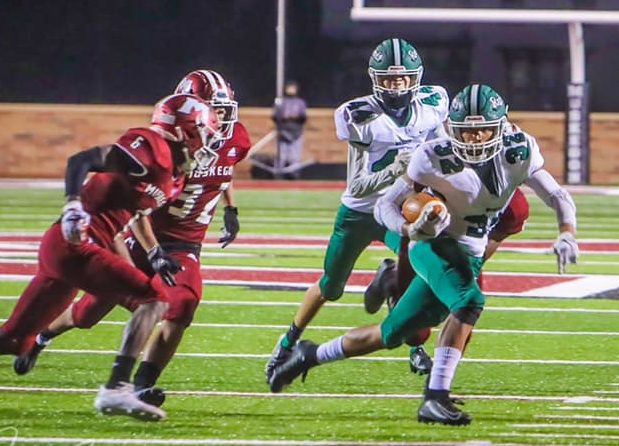 Reeths-Puffer’s No. 32 Landon Mechem is pursued by No. 6 Damari Foster and No. 32 Meshaune Crowley. Photo/Joe Lane

Muskegon only led 14-7 at halftime, a score that raised a few eyebrows throughout the area. But Fairfield said the slow start was more about his team trying a different tactic this week, and not about last week’s loss.

“That was just us,” Fairfield said. “We came out, and the first 11 to 15 plays might have been passes. We just wanted to come out and try something different. We’re so routine with coming out and establishing the run and then throwing later.”

The score didn’t remain close for long in the second half.

On Muskegon first offensive play, Crowley broke loose for a 57-yard touchdown run, extending the Big Red lead to 21-7 with 9:08 left in the third quarter.

Muskegon also scored on its next possession when Crowley punched in a 13-yard TD burst, making the Big Red lead 27-7 with 6:36 left in the third quarter.

In the fourth quarter, Crowley scored twice on a two-yard run and a 23-yard run to give Muskegon its final margin of victory.

“He’s still working on ball security,” said Fairfield about his senior quarterback. “But this is his offense and it’s his team. Each hit and each carry he’ll get better and better. This is his second game and he’ll be where we need him come playoffs.” 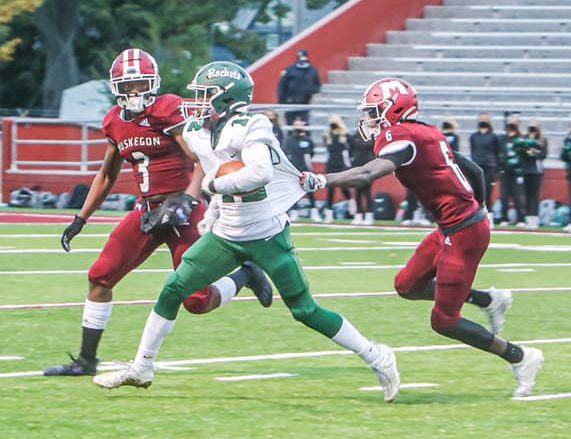 “It feels great,” Crowley said about his performance. “I give credit to my linemen. We started slow but got our heads on straight and focused.”

On the defensive side, Damari Foster led the way with two interceptions while also adding four tackles. Meshaune Crowley tacked on five tackles for the Big Reds.

“I was just paying attention to the (Reeths-Puffer) quarterback’s eyes,” said Foster about his stellar night. “I saw his target and just broke on it.”

Veihl completed 14 of 36 passes for 105 passing yards and one touchdown for Reeths-Puffer. Tayte Vanderleest led the Rocket defense with 10 tackles and a fumble recovery.

Reeths-Puffer fell to 1-2 overall and 1-2 in O-K Green play. The Rockets will host Grand Rapids Union next week while the Big Reds will travel to Zeeland East.

Muskegon’s No. 2 Tyreese Oakes on the rush. Photo/Joe Lane

Muskegon QB Amari Crowley gets ready to make a pass in front of Reeths-Puffer’s No. 55 Jacob Udell. Photo/Joe Lane