MUSKEGON – The Muskegon Catholic Central football squad is dangerous once it gets warmed up.

That’s particularly true on the offensive side of the ball. 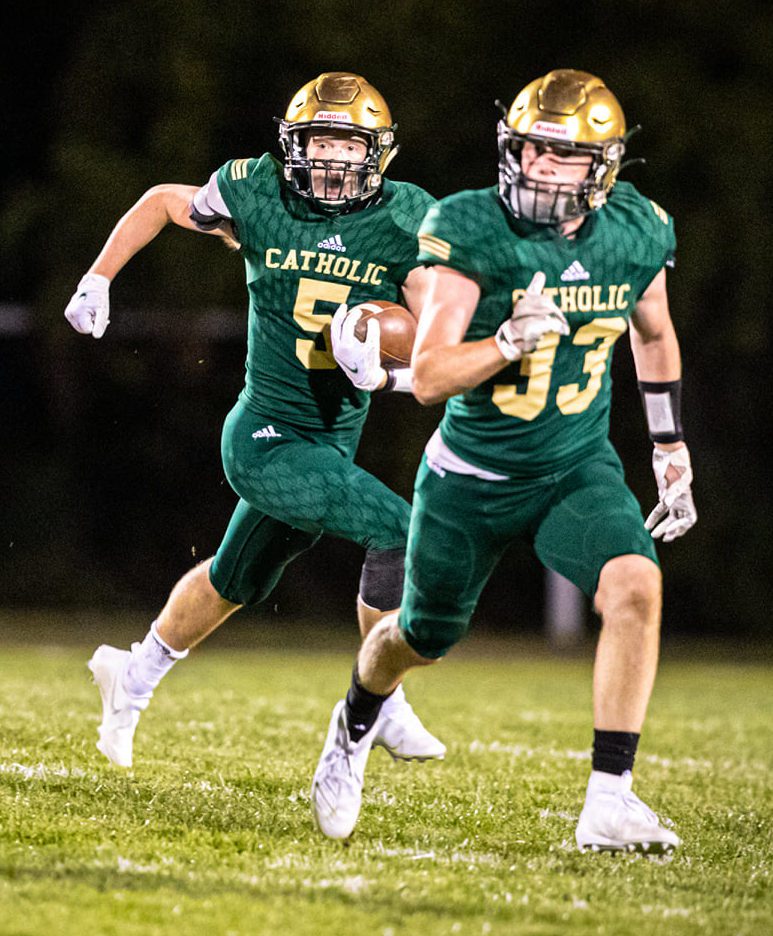 The Crusaders got solid production from six players in their offensive backfield, including quarterback Max Price, to overcome a slow start and defeat Ludington 30-6 on Friday in a Lakes 8 contest.

The Crusaders will try to improve to 2-0 when they host Benton Harbor next week.

The Crusaders led 8-6 with just over three minutes left in the third quarter, then exploded in the final 15 minutes of regulation, scoring the last 22 points of the contest.

“The team bounced back really nicely,” said Muskegon Catholic coach Steve Czerwon. “I was proud of the fact that we had only one turnover, and proud of our composure after giving up the touchdown.”

The Crusaders were led in rushing by Elliot Riegler with 54 yards on two carries, while Price ran for 53 yards on 14 carries.

Price also had a great game through the air, completing 9 of 12 throws for 157 yards and two touchdowns.

Sam Convertini caught three passes for 71 yards and one touchdown while Rutz had two receptions for 27 yards and a score. Kartes chipped in with 55 yards receiving on two catches.

“We have always kind of been that way,” said Czerwon about having multiple weapons. “It gives our opponents multiple things to think about.” 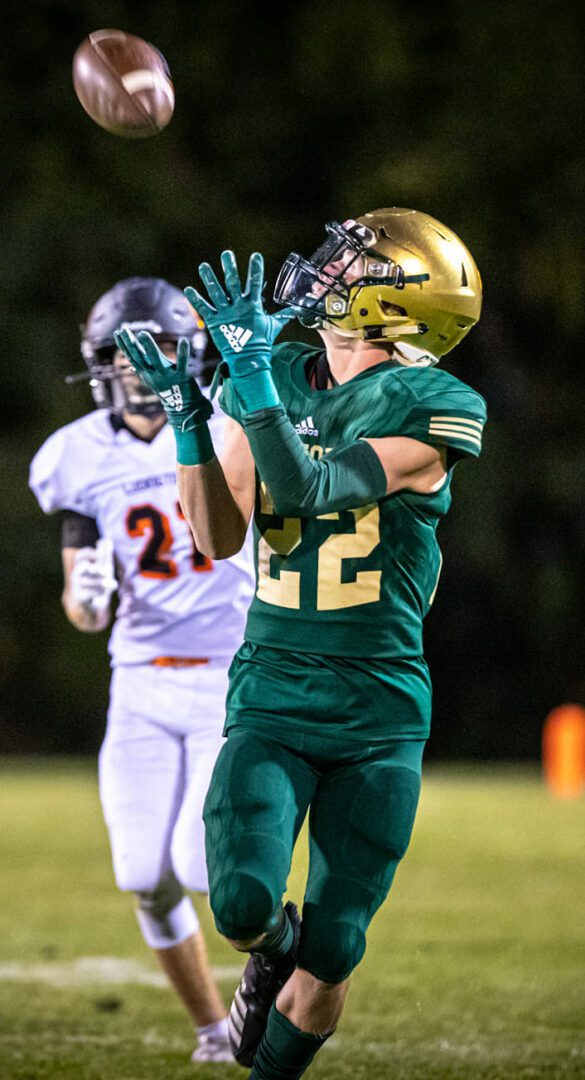 Sam Convertini looks back to catch the ball for MCC. Photo/Tim Reilly

The contest was scoreless after the first quarter, with Ludington’s first three possessions ending with punts, while the Crusaders punted after their first possession and fumbled the ball on their second.

Muskegon Catholic finally broke the deadlock on its third possession, scoring on a 22-yard touchdown pass from Price to Rutz. Powell then caught the two-point conversion to give the Crusaders an 8-0 lead with 11:35 remaining in the second quarter.

The Orioles finally broke through offensively with 3:38 remaining in third quarter after quarterback Chase Hackert ran for an 80-yard touchdown. The two-point conversion failed and MCC led 8-6.

“It could have gone either way for us,” Czerwon said. “But we scored three touchdowns and put the game out of reach, and I was proud about how the guys reacted.”

The Crusaders quickly responded with 1:40 left in the third quarter, scoring on a 23-yard completion from Price to Convertini. The two-point conversion gave MCC a 16-6 advantage.

“There is no better feeling when you have that ball secured in your hands and you walk across the goal line,” said Convertini. “It’s just the best, and I am glad we got to play this year and not call it off.”

MCC scored on a 55-yard run by Riegler with 11:39 left in the fourth quarter to increase the Crusader lead to 22-6.

Powell closed out the scoring for Muskegon Catholic with a one-yard scamper with 6:37 left. Waller converted on the two-point try with a run.

The Crusaders were paced defensively by Kartes with six tackles while Convertini added five.

The Orioles were led offensively by Hackert with 131 rushing yards and a touchdown on 16 carries while Jake Plamondon caught two passes for 37 yards.

Ludington’s starting quarterback, Brad Mesyar, was 5-for-12 passing for 52 yards.

The Orioles will play their next game in two weeks against Orchard View.

Max Price makes a pass from the pocket as Ludington’s No. 9 Levi Lamn tries to block the pass. Photo/Tim Reilly