MUSKEGON – Max Price was not supposed to be the starting quarterback for Muskegon Catholic Central in 2018.

That job belonged to All-Stater Cameron Martinez, who led the Crusaders to their fourth straight state title as a freshman in 2016, and to the district finals a year later.

Then Martinez made big news when he announced that he was transferring to Muskegon High School for his junior year, to become the Big Reds’ quarterback 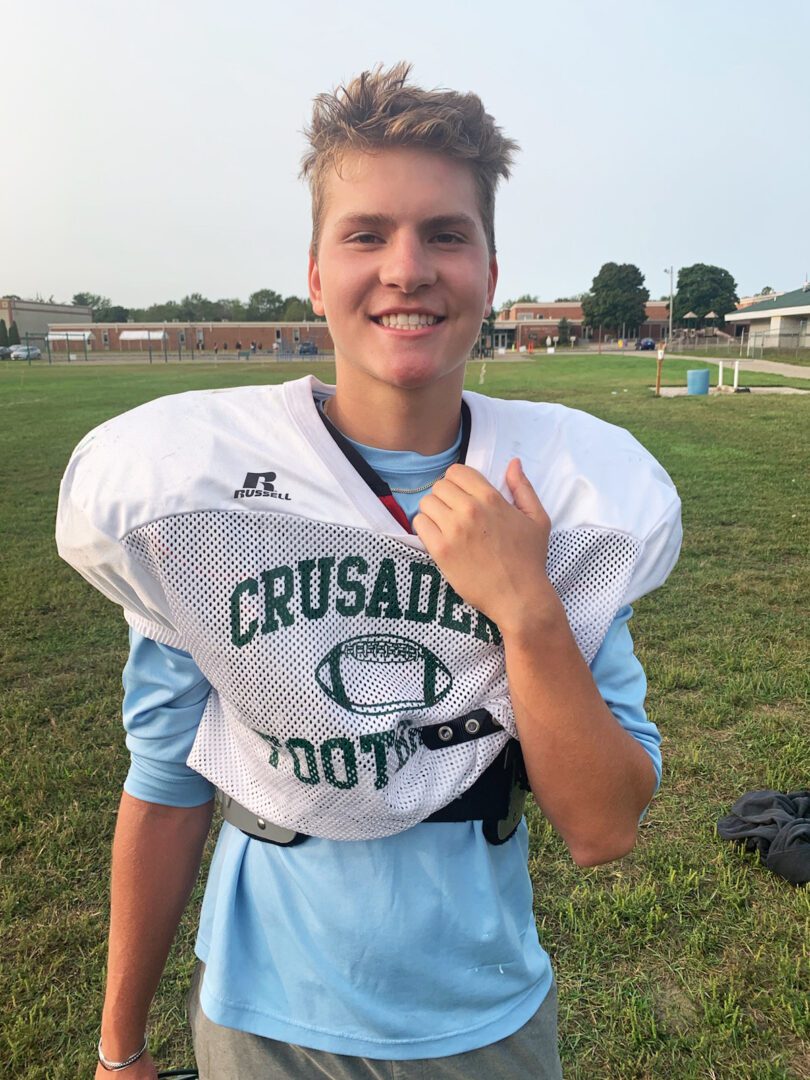 Suddenly Price, who was only entering his sophomore year, inherited the job by default.

The 2018 season went badly for Price and the Crusaders, in a number of different ways.

“Coach told me I was going to be the starter, and it didn’t really hit me then, but once summer came and we got close to the season, the pressure started coming, and it didn’t go too well,” said Price, who was a water boy for the team in elementary school, and witnessed many of MCC’s glory years. ‘It was weird when opponents would put up a big number on us, because we had been used to doing that to other teams for years and years.”

The bad season was even worse for Price, because he played injured for several games before he was finally shut down later in the season to begin the healing process.

The Crusaders were 3-3 when Price was taken out of the lineup, and still had a chance to make the playoffs. Then they went on to lose their last three games against Manistee, Benton Harbor and Newaygo.

“I fractured three vertebrae in my spine in Week 2,” Price said. “I had an MRI done the following Monday, but we didn’t get the results back until Week 7. I tried to play the best I could, but it was very uncomfortable.

“When we finally got the results, they said if I played and took a bad shot to the back I could break my spinal cord, so that definitely shut me down.”

The terrible season served one positive purpose – it made Price and the other returnees super determined to turn things around in 2019.

The first one-third of last season was shaky. After beating Algonac 21-0 in the opener, MCC lost 42-22 to Pontiac Notre Dame and 36-19 to conference rival Orchard View, and suddenly everyone was assuming that the Crusader slump would be a two-year ordeal. 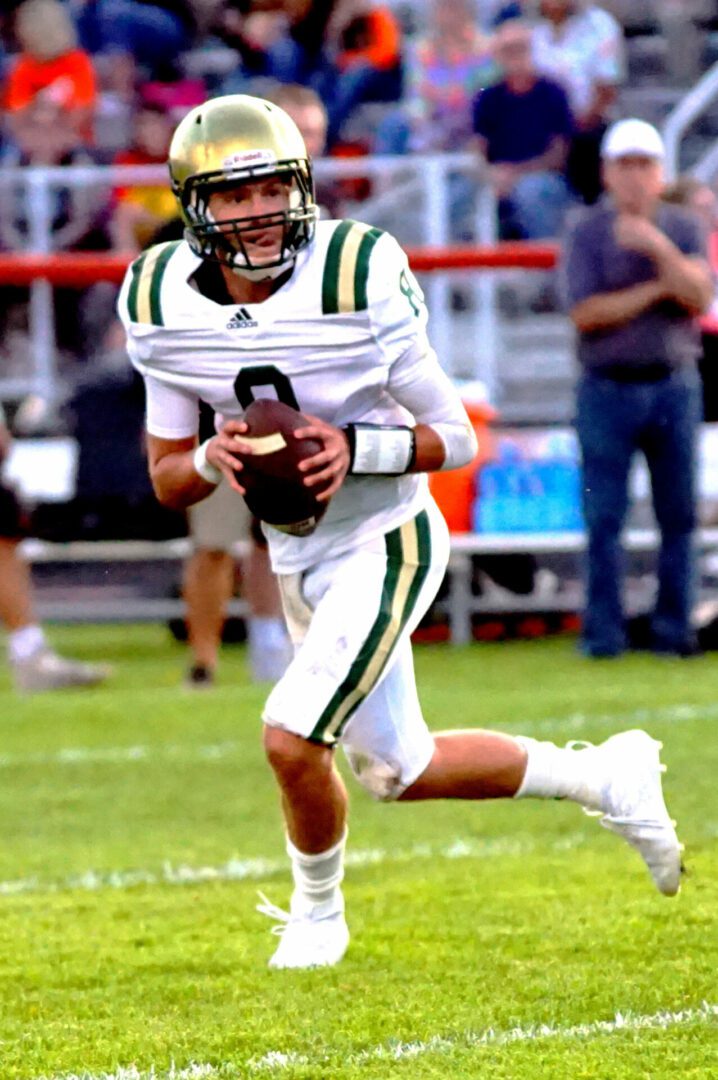 Price rolls out for a pass last season. Photo/Leo Valdez

But the Crusaders got back in gear, winning their last five regular season games, finishing 6-2, and getting into the Division 6 playoffs.

Price found his comfort level at quarterback, passing for an impressive 904 yards and 16 touchdowns on the season.

“We talked about it as a team, and we all knew we were better than our record said,” Price said about bouncing back from the slow start. “So we took the next week’s practices more serious and started to play more as a team, and everything clicked after that.”

The return to the postseason ended quickly for MCC, which lost 14-0 to Ravenna in the first round. But Price and the Crusaders had gotten a taste of consistent winning again, and it fueled their determination to complete their comeback in 2020.

“We had a lot of starters coming back last year, and we didn’t like the feeling of being kicked around the year before,” Price said. ‘Last year we took a step in the right direction, and now we want to keep it going.”

The beginning of summer practice this year held great promise for the Crusaders, who have eight starters returning on both offense and defense. But the threat  of COVID-19 hung over every team in the state, and their worst fears were realized on Aug. 14 when the MHSAA announced that the high school football season had been postponed until the spring.

“I heard the Big 10 was cancelled, so I figured, it that was the case, I didn’t think we were going to play,” Price said. “We practiced that morning (on the 14th), and that afternoon I was at my friend’s house when they said the season was cancelled. I was very upset, mainly because I knew what kind of a team we could be this year. 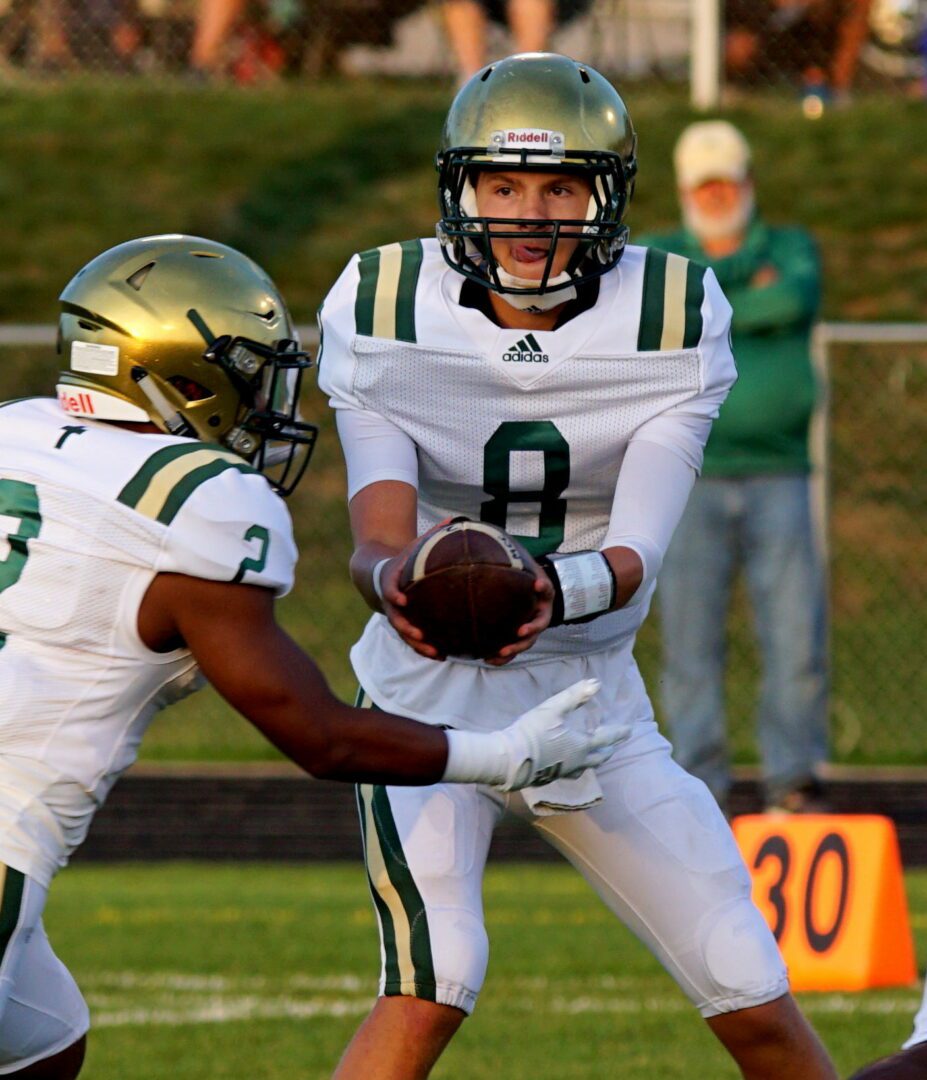 Price gets ready to hand off the ball during last season action. Photo/Leo Valdez

The Crusaders, like everyone else, put away the pads and helmets after that, and struggled to accept the idea of a fall without football. Then everything changed on Sept. 4, when the MHSAA announced that the season was going to happen on schedule after all, albeit with a shortened six-game regular season and few fans in the seats.

Price said his energy and enthusiasm was instantly restored, and he doesn’t think the weeks of missed practice will hurt the team at all. He also feels very optimistic about the season, although he isn’t making any predictions

MCC opens this Friday at home in a Lakes 8 Conference game against Ludington, and LocalSportsJournal.com will be on hand to cover it.

“Three weeks is a long time (to go without practicing), but we all know the plays and formations. We’ve all been playing MCC football for a long time. That first practice back felt great, and it was a great practice.

“We’re going to take it one week and one game at a time. We haven’t played one game yet, but I definitely think, if we all play together, we could be something special.”

MCC head coach Steve Czerwon knows that whatever happens, his team will be in capable hands at the quarterback position, because Price has learned the job the hard way, and is ready to shine.

“He’s a good overall athlete,” said Czerwon, who hinted that Price might be more involved in the running game this year. “He was kind of put in a tough position as a sophomore when he became the starting quarterback, and he really did a wonderful job considering he had been thrust into it. We had a very young team that year, anyway.

“He has naturally matured as he’s gone through the program. Now he’s a senior quarterback at Muskegon Catholic and we’re expecting good things from him. We’ve had some good ones in the past, and Max throws about as well as many of them, probably better than most.”