SEATTLE – “I do feel him with me at the park. Where else would he rather be than at the ballpark?”

Those are the words of Marcus Gignac, 25, a Forest Hills Central High School and Grand Valley State University graduate who is a groundskeeper for the Seattle Mariners. He is also the son of Henry “Hank” Gignac, who passed away this spring after battling COVID-19. 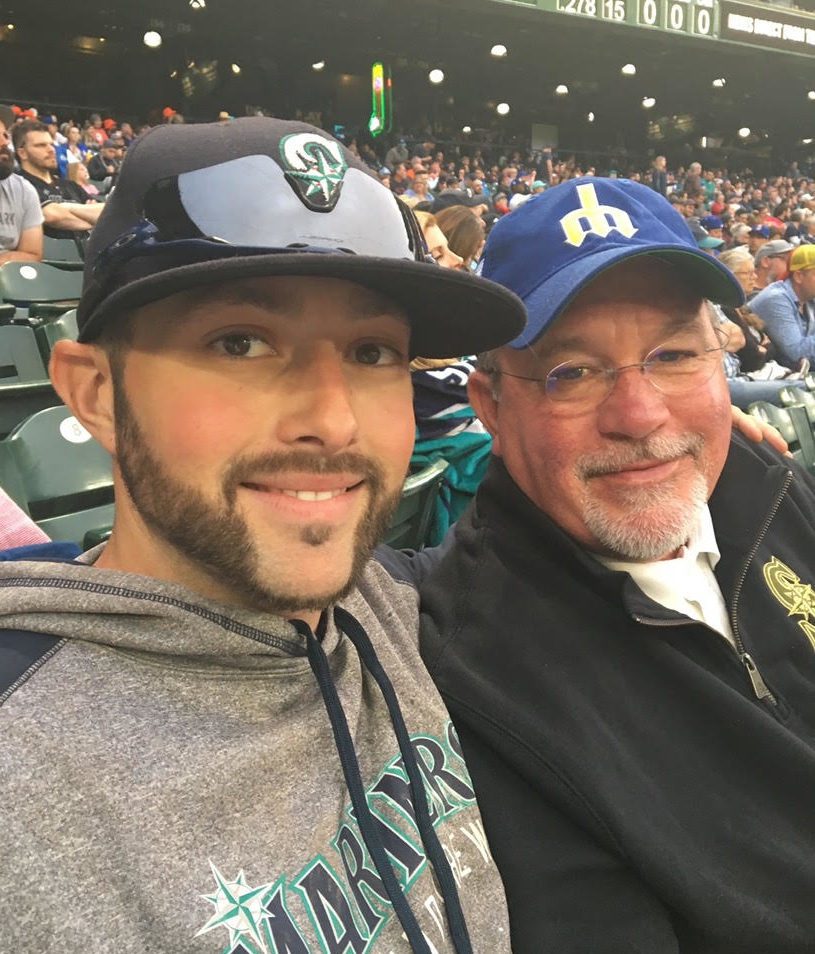 It’s been a strange and incredibly painful spring for Gignac. While he continues to work for the Mariners, his professional life has become filled with uncertainty due to the shutdown of organized sports activity, including pro baseball.

Things have been far worse back home. He returned to the area this spring to monitor his father’s condition after he was hospitalized with coronavirus. He was heartened when his dad appeared to be out of the woods, then was crushed when he relapsed and died of a condition believed to be related to COVID-19.

Even more painful was the fact that Gignac could not be with his father at the end, due to strict quarantine rules. Hank Gignac, a Cascade Township resident who was president and CEO of Dooge Veneers, passed away April 17 at the age of 61.

“Not being able to communicate with him was the hardest part,” Gignac said about the final days of Hank’s life. “At the end we all got to speak to him on the phone, and the doctors told us that he heard us. After we all gave our final words, he left. We think he was just waiting for us to give the go-ahead.”

How a beloved family sport led to a career

The love of baseball runs deep in the Gignac family, and it’s something that helped Marcus grow closer to his father over the years.

“Baseball in our family is number one,” said Gignac, who studied and played club baseball at GVSU. “My dad raised my brother John and I to try our best, but he never pushed and never criticized. He was my brother’s little league coach growing up, and was always at my elite training sessions.” 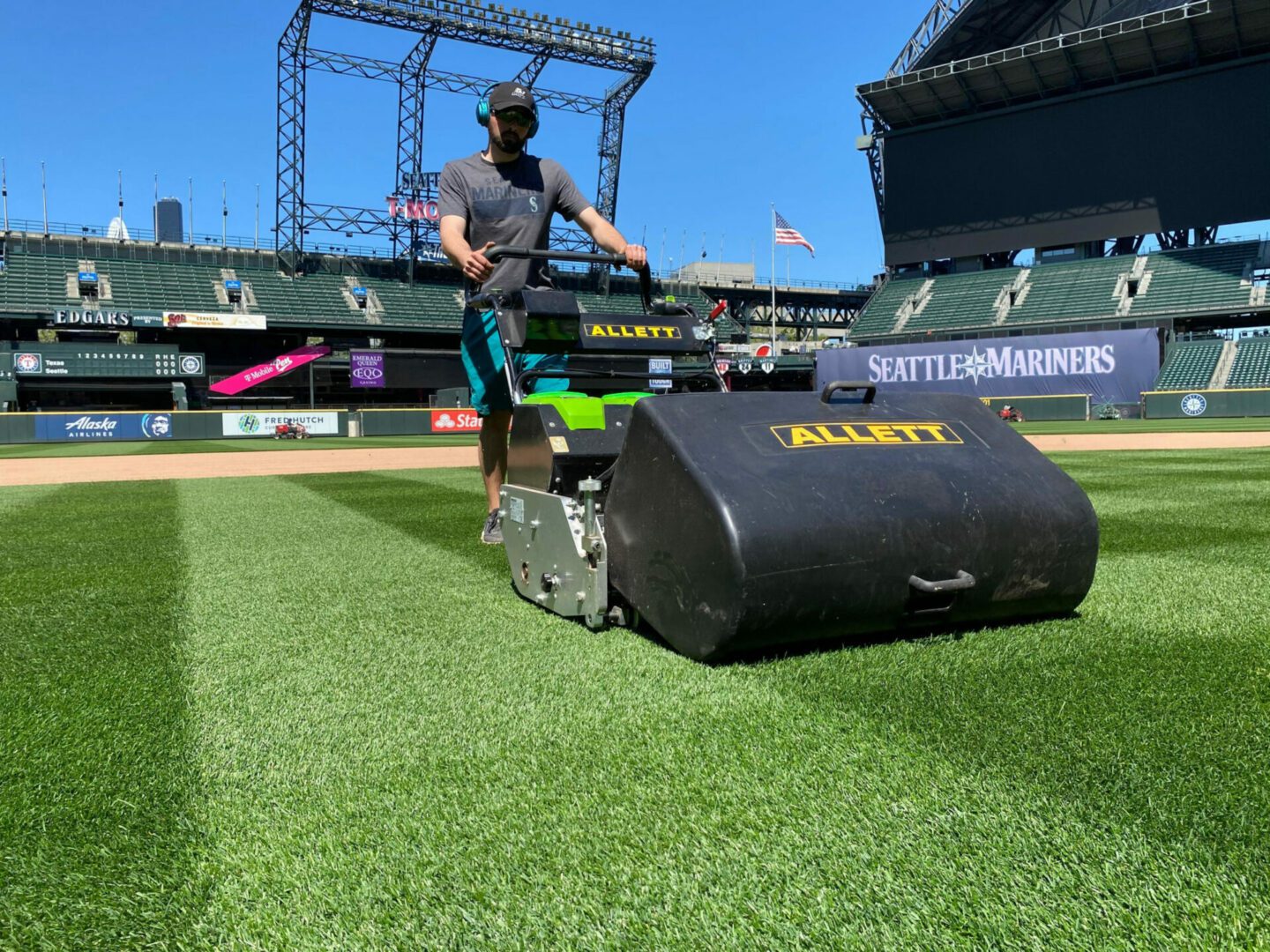 Marcus Gignac works on the grounds in Seattle.

The family’s passion for baseball led them to purchase season tickets for West Michigan Whitecaps games, a move which began Marcus’ journey toward his unique career as a Major League Baseball groundskeeper.

He started down his professional path in 2016, when he was hired to be a part of the Whitecaps Game Day crew. Gignac found the job posting during a class at Grand Valley when he was strolling through social media posts.

“I was looking for a summer job online,” said Gignac about the process. “I saw on Twitter that the Whitecaps grounds crew was looking for summer guys and so I reached out. They called me the next day and it worked out really well.”

As part of the crew, Gignac arrived at Fifth Third Ballpark in Comstock Park about two hours before the first pitch on game days.

“I came in and had a full crew of four or five interns,” said Gignac about his first year. “We came in and basically did minimal basic things to clean or drag between innings. We also did the tarp after the game and it was really basic. I’d also come in one day a week to help through the day.”

The first season went so well for Gignac that he secured an internship with the Whitecaps for the 2017 season.

He already loved working outdoors, and had experience mowing a lot of lawns over the years and working at Egypt Valley Country Club for three summers. But he quickly learned that being a groundskeeper in professional baseball is much harder than just maintaining a nice lawn.

“I didn’t have a whole lot of knowledge going into it,” Gignac said. “I was fine with the grass side of things, but had to deal with a whole different side when it came to dirt.”

Since T-Mobile Park, the home of the Seattle Mariners, was scheduled to host that same show in September, representatives from the Mariners grounds crew visited Fifth Third Ballpark to see how the Whitecaps grounds crew was preparing for unique show.

“I got to hang out with the head groundskeeper of the Mariners,” Gignac said. “Then I followed up with him and did a job shadow that fall, before being offered a position a few weeks later.”

As part of the Mariners grounds crew, Gignac arrives at work at various times, depending on the team’s schedule.

“On game day, typically I arrive at eight or nine in the morning, depending on if it’s the first game of the home stand or the middle of the home stand, when I can arrive around nine,” he said. “I’ll come in and fix the mound, plate, and bullpen right away, which involves patching holes that are dug out.

“I’ll smooth out the dirt by providing the right amount of moisture and make sure that it’s ready to go for that night. Then we’ll clean up the warning track, whether it’s sunflower seeds or gum from the night before, which takes about an hour.”

After mowing the field around noon for about an hour each day, the crew will then take a lunch break before returning to continue preparation.

During the final process, Gignac is responsible for home plate while his boss waters the dirt, one worker does chalk and another crew member works on the mound.

“Once game time rolls around I’m done,” Gignac said. “We have a crew that comes in and takes over after the game.”

For Gignac, groundskeeping is something that most people can only dream of – a career that fulfills his passion and makes him excited about going to work every day.

“It’s obviously a dream,” he said. “My original dream was to play, but I lost that in college. I found this passion and it’s been amazing.”

His father, of course, loved the fact that Marcus found his way to the big leagues, working close to the game that meant so much to the entire family.

Hank and Sue Gignac visited Seattle and the ballpark several times, including last summer, and loved the experience.

“The first time they came, I had a nervous excitement, wondering what they might think,” Gignac said. “But they were blown away with what I’m doing here and how hard I’m working while becoming my own person. Having them come to Seattle was special.

“My dad became a Mariners fan. He never stopped supporting me with whatever I did.”

While all fans have been disappointed by the delay of the baseball season this year, Gignac had little time to worry about that, with his father becoming suddenly ill back home.

“The last text I ever got from my dad was that he was having a slight fever for a week and wasn’t getting tested because he only had one symptom,” he said. “I texted him the next day, saying you need to get tested. It was hard for me, because as a son I wasn’t able to help him and be by his side.”

Hank was eventually hospitalized with COVID-19 and put on a ventilator, and his condition appeared to be improving.

Gignac eventually flew home to Grand Rapids, believing the situation was under control.

“I was feeling positive about it,” he said. “I knew he was strong and healthy. I knew he was going to fight it.”

His hopefulness was quickly dashed, however, due to a bleeding condition in Hank’s stomach that was believed to be related to coronavirus.

“He had a problem with a bleeder in his stomach that caused him to go unconscious,” Gignac said. “The blood cut off to his brain and put him in a coma, which was it.”

Despite the loss of his father and uncertainty around the start of the baseball season, Gignac is continuing to work at T-Mobile Park, a place where he feels very close to his dad, every time he walks on the playing field.

“A hummingbird followed me on three separate occasions,” said Gignac about a work day in May. “Every time it came out it was by me, so I researched and found the spiritual meaning of it. It has many different symbols, but apparently it’s a lost soul trying to reconnect. It was the most spiritual day of my life, and I felt like when I was working, I was being watched. I felt a sense in my body that my father was there with me.”