The Western Michigan Christian girls basketball team refers to itself as the “Great 8.” 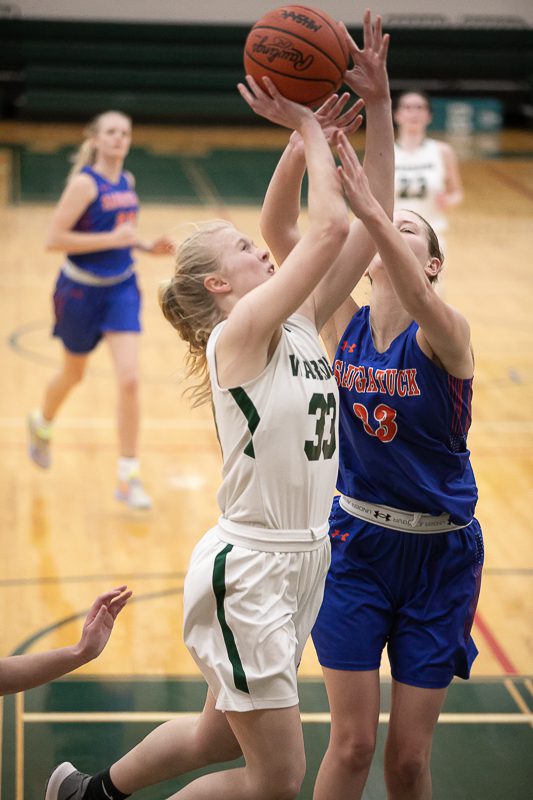 WMC’s Taylor Folkema gets fouled while going in for a layup. Photo/Randy Riksen

That’s because only eight girls went out for the varsity squad this season.

Eight players also put points on the scoreboard on Friday, when the Warriors overcame a pesky Saugatuck squad to capture a Division 3 district championship with a 59-40 win on their home court.

“It feels terrific, especially because we had to work for it,” said WMC coach Jeremy Goorman. “We only had eight girls all year. I thought the Great 8 fit perfect, and the kids really bought into it and worked hard every day. They took it personally that they were the only eight girls to play varsity basketball in the whole school.”

The Warriors will head to Morley-Stanwood High School for Tuesday’s regional semifinals.

The win did not come easy for the Warriors. They led 10-5 after the first quarter and 25-18 at halftime, but only had a 40-37 advantage with seven minutes to play in the fourth quarter.

WMC was plagued with foul trouble throughout the game, as well as turnovers caused by a difficult Indian press. 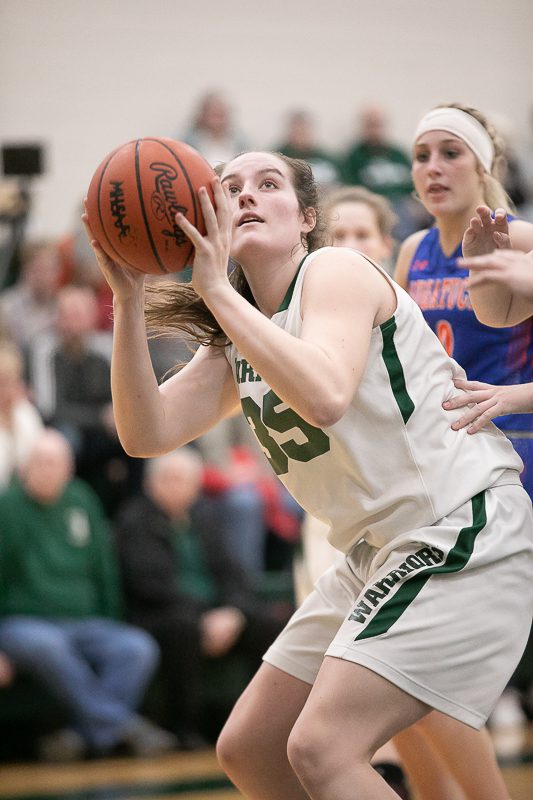 Maddie Wiersema looks to take a shot under the hoop for WMC. Photo/Randy Riksen

Next to hit the bench with WMC power forward Kyla Wiersema, who picked up her fourth foul with a minute left in the third. Also sitting down with four fouls was her twin sister, Maddie Wiersema.

Saugatuck took advantage of the shorthanded Warriors and tied the score 34-34 with just over a minute left in the third.

But WMC woke up in the fourth quarter. The Warriors were able to figure out Saugatuck’s press, and Folkema and Kyla Wiersema re-entered the contest.

The Warriors took a 40-37 lead with seven minutes left, then went on a 19-0 run to take control of the championship game. Kyla Wiersema and Folkema each scored six points in the fourth while Kayla Johnson had five.

Leading WMC in the game was Kyla Wiersema with 17 points. Folkema finished with 16 and Maddie Wiersema added 10.

Saugatuck was led by Zoe Myers with 11 points.

WMC’s No. 20 Kelcea Waller reaches in for the foul. Photo/Randy Riksen

Libby Mast goes up for a shot in traffic for WMC. Photo/Randy Riksen

Greta Vander Heide takes a shot from the outside for WMC. Photo/Randy Riksen